Let us now turn our attention to the TSBD doorway.  As discussed in earlier posts,  Blender and Makehuman can be used to create 3D scenes which contain human models in 3D space.  These models and their corresponding rigs are generated with Makehuman.  These rigs are  essentially bones and skeletons which Makehuman seamlessly joins with the object’s mesh to enable movement, which can in turn be used to pose our models, configure and create animations, etc.  These are then imported into Blender as MHX2 fully rigged models, where the possibilities are endless.  When we apply this technology to the TSBD Doorway,  we can study exactly who was standing where at 12:30PM on November 22, 1963.

We have already covered the importance of how shadows are rendered in Blender in earlier posts.  With Blender, we can arrange our light source, which in this case is the sun, to emit light that will replicate the shadows seen in any photograph.  In essence, we “work backwards”, by setting this parameter first and from there it’s a simple matter of matching the reference image to create the 3D scene.

So let’s consider the figures in the entrance way of the TSBD: 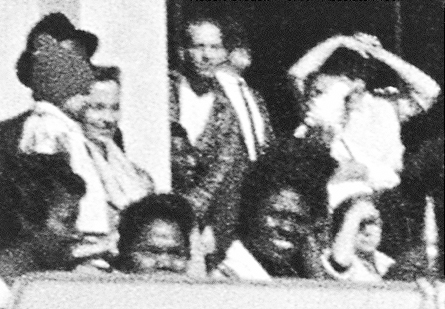 Obviously, in any location on the northern hemisphere of this planet in late November, the sun takes a flatter path than, for example, in June or July where the sun is high above.   This is produced by the earth’s permanent tilt and rotation.

After we create our rigged models, these can be posed into any position necessary to match and replicate the reference image, which in this case is the enlargement of the Altgens6 photograph seen above. This  TSBD Doorway model in particular, is a Sketchup model imported into Blender.  Basing our calculations on what the shadow patterns show in the reference image, we are able to set the position of the sun as follows: 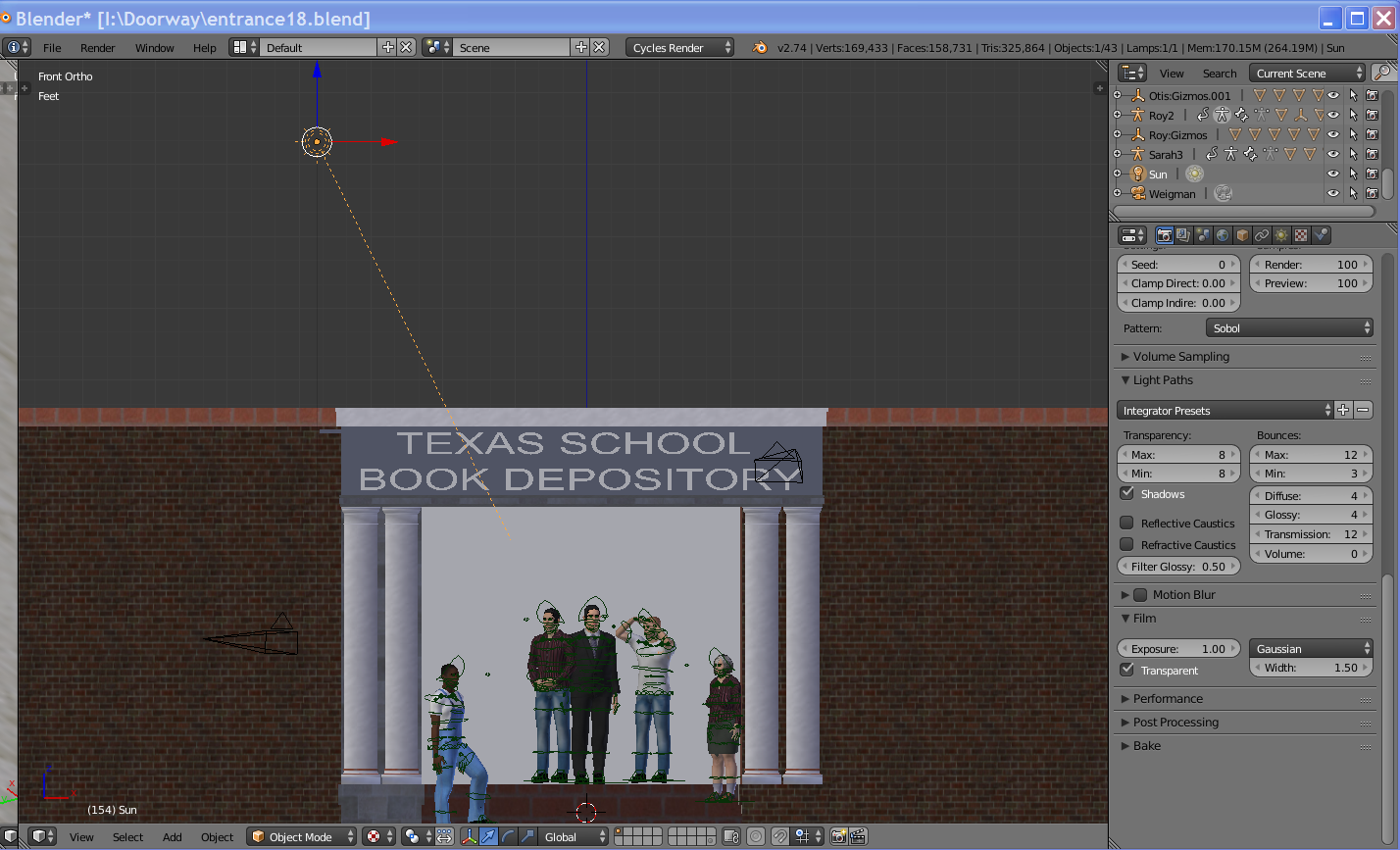 This next image shows how we work with our models in MHX2 “pose mode”.  In this case, the active object is the Doorman figure.   Each model is exported out of Makehuman with different “handles” that control the various movements of the rig.  For example, the table shown below left shows the extensive capabilities of the Makehuman eXchange  (MHX2) function which controls facial expressions: 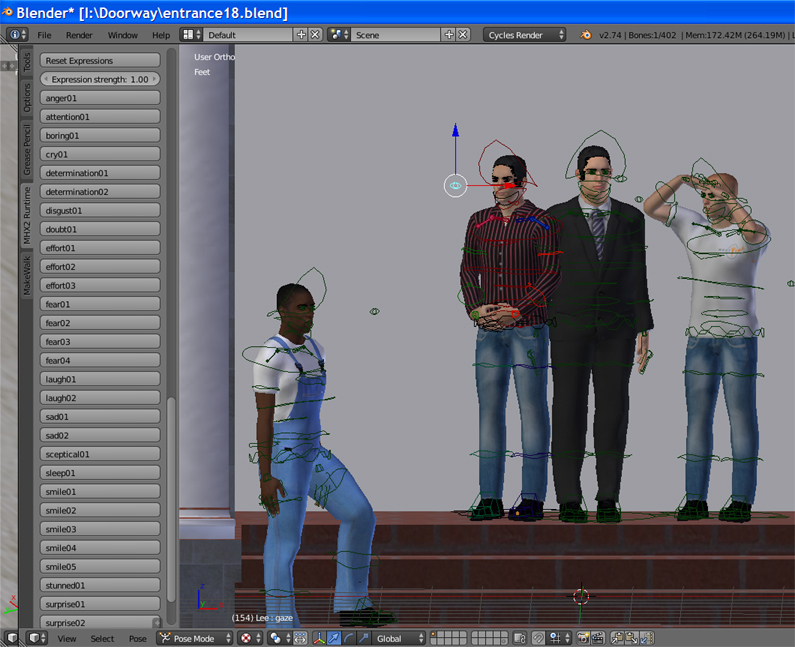 A full range of human motion is similarly available within the MHX2 control tab.  And this renders the following facsimile of the doorway of the Altgens6 photograph: 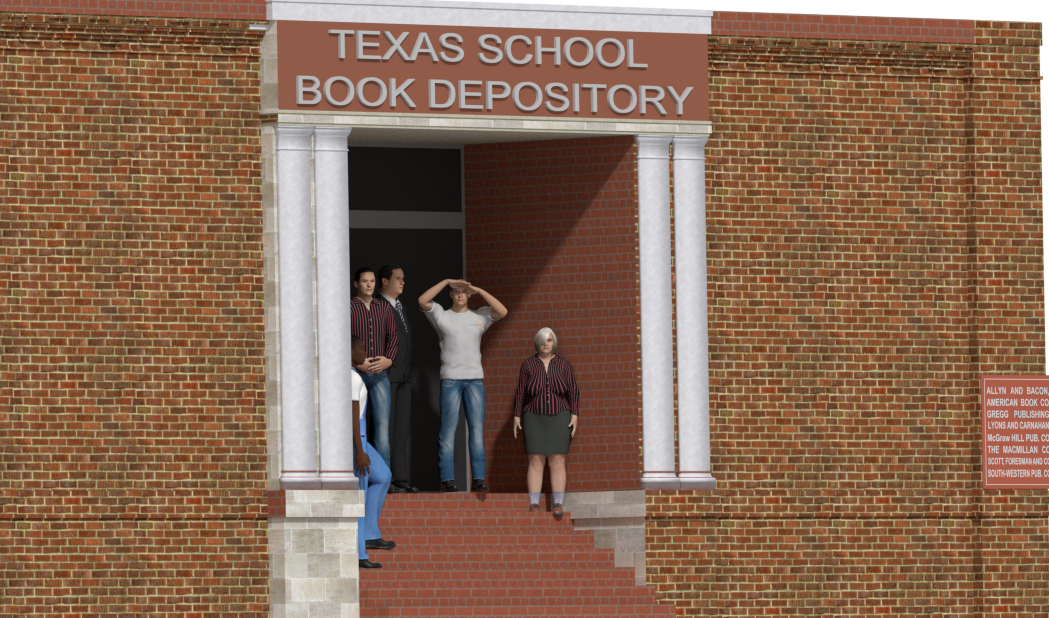 This is how our scene begins to take shape.  It is a simple rendering with only five people in the doorway.  Of course, there were more people there, and these will be added to the scene later.  (For example, “elbow man”,  (Otis Williams), Pauline Sanders, Madie Reese,  Wesley Frazier, etc. ) The correct textures of the clothing they wore that day will be incorporated into the scene using a Blender technique known as “texture paint”.  In the meantime, it is important to study these renderings because the shadows allow us to correctly place each model in its proper place in 3D space.  Will expand on this concept in a future post.

Here is another closeup of the doorway at a slightly different angle than the above image:

Notice how all of the shadows present on our subjects in the Altgens6 photograph are replicated in this rendering. As we can see from the above image, it is impossible to have “black tie man”, (Joe Molina), both in front and behind “Doorman” (Lee Oswald) as we see in the Altgens6.  (This is a detail that those who insist the A6 has not been altered have never been able to explain.)  The physics of 3D space make it physically impossible.  Below a shadow comparison with Doorman: 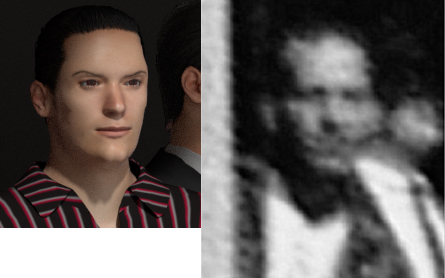 As mentioned above, an important MHX2 feature to point out here is how we are able to adjust our models to show different facial expressions.  For example, Roy Lewis, who was “black profile man”, is shown with a  a “shocked”, open mouth expression, just as seen in the A6.  Our model of Sarah Stanton can be seen with a milder surprise expression (even though we don’t see her in the A6, poetic license 😉 and Lee Oswald and Billy Lovelady have pursed lips).

Our next image is an overhead view of the doorway, showing the direction of the shadows at the moment the Altgens6 was taken, as well as the exact positions of the three men in the middle – Lee Oswald, Joe Molina and Billy Lovelady:

And finally, the line of sight and angle which camera man Dave Weigman would have seen as he drove past the TSBD that day:

***Blender and Makehuman are the next generation 3D computer graphics open source software which are available to anyone who is willing to take the time to learn how to use them.  There are literally millions of tutorials on youtube from all over the world.  For more information and if you are interested, just click the links at the top.