I was working on the files contained in batch one of the recently released JFK assassination-related files by the National Archives:

In this collection, one CIA Cryptonym kept popping up: SKEWER-1

I immediately went to the Mary Ferrell site to check out who this colorful pseudonym belonged to.  If you clicked on the above link, you probably noticed that  there is no definition for SKEWER-1. (Update: Thanks to Bill Simpich and the Maryferrel.org web site repository, there is now. )

Before discussing SKEWER-1’s identity, we need to examine some of the content of the cables and reports that have been released this past month.  The content should give us an idea of the importance and stature of this individual.  These cables also clearly describe the importance of Puerto Rico in the geo-political arena, and how it appears that the colonial Puerto Rican government was for all practical purposes, forced to serve as a base of operations for Cuban exile groups trying to overthrow Castro.

As we delve into the content of these documents, it is imperative that we become familiar with other Cryptonyms involved in this operation, and the identities of these individuals and organizations.  It seems that SKEWER-1 was involved with the crème de la crème of Cuban exile groups :

AMBIDDY-1: Manuel Artime Buesa, a prominent Cuban exile who was in the Bay of Pigs invasion, in 1963 moved to Nicaragua as leader of operation AMWORLD. 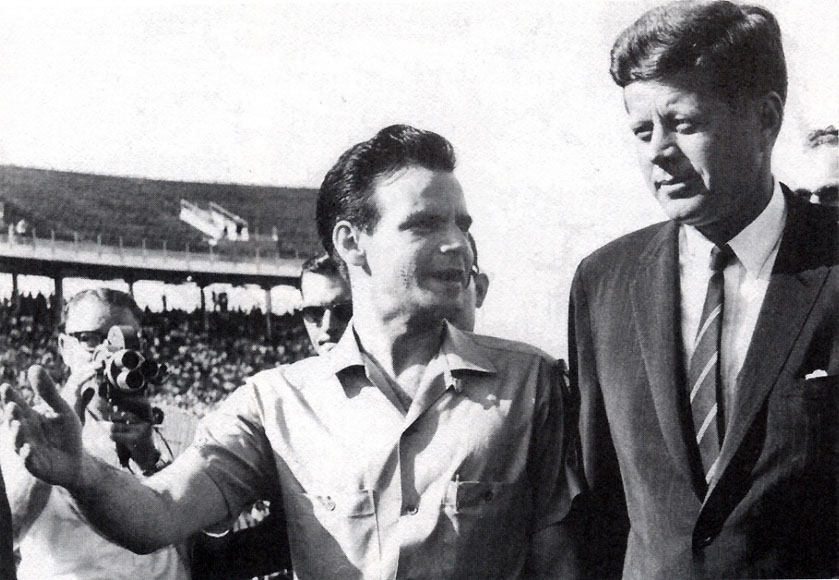 AMSCROLL: UR, also known as Unidad Revolucionaria. Its organizing membership was described as impatient former members of the MRR, well-educated and with the skills needed to overthrow a government.

AMBANG-1:  Manuel Ray Rivero, leader of the Revolutionary Movement of the People (MRP) and later Junta Revolucionaria Cubana (JURE).  E. Howard Hunt wrote:  “After the invasion the Kennedy Administration could not do enough for Manuel Ray.  A cozy post was secured for him in Puerto Rico as Chief of (Governor) Muñoz Marín’s housing projects.”  Governor Luis Muñoz Marín loved Manuel Ray.  The new documents describe Muñoz’s efforts to groom Ray to replace Castro as President of Cuba once the U.S. Goverment and its exile allies got rid of the Cuban dictator. 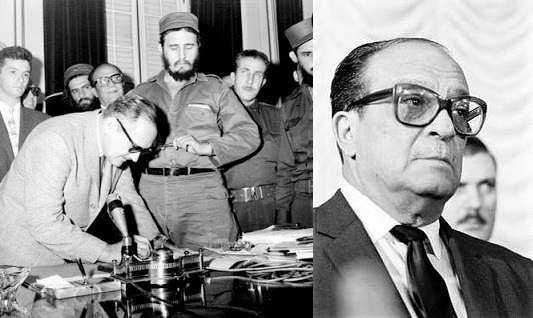 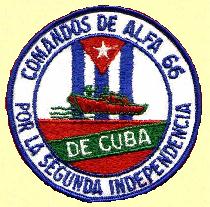 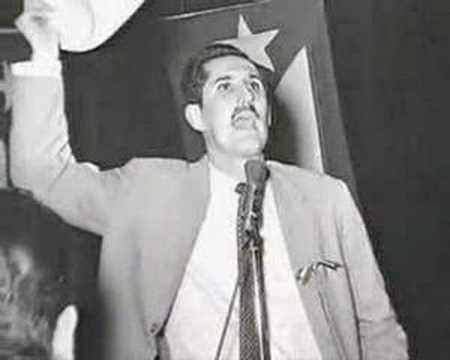 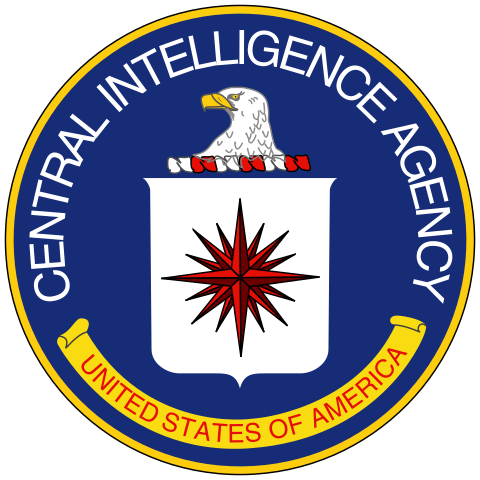 ODYOKE: United States government. It sometimes specifically means “The White House”.  Note to see if it is referring to an individual or entity in charge for a particular set of decisions on behalf of the US government.

WAVE/JMWAVE:  CIA Station in Miami, training facility for anti-Cuban operations, existing on what is now the site of the Miami Zoo.

What’s in the documents

The following are just some of the cables and documents that mention SKEWER-1.  Indeed, they tell a story of intrigue and high level stakes: 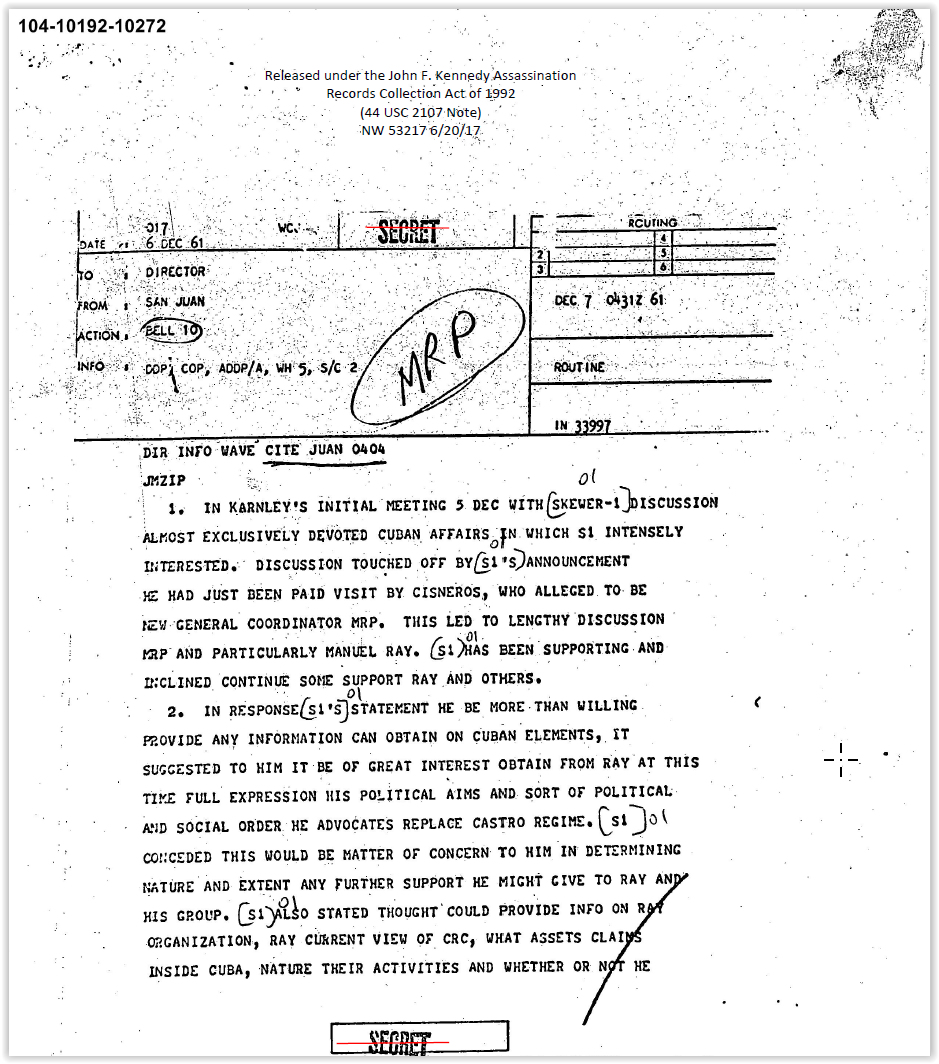 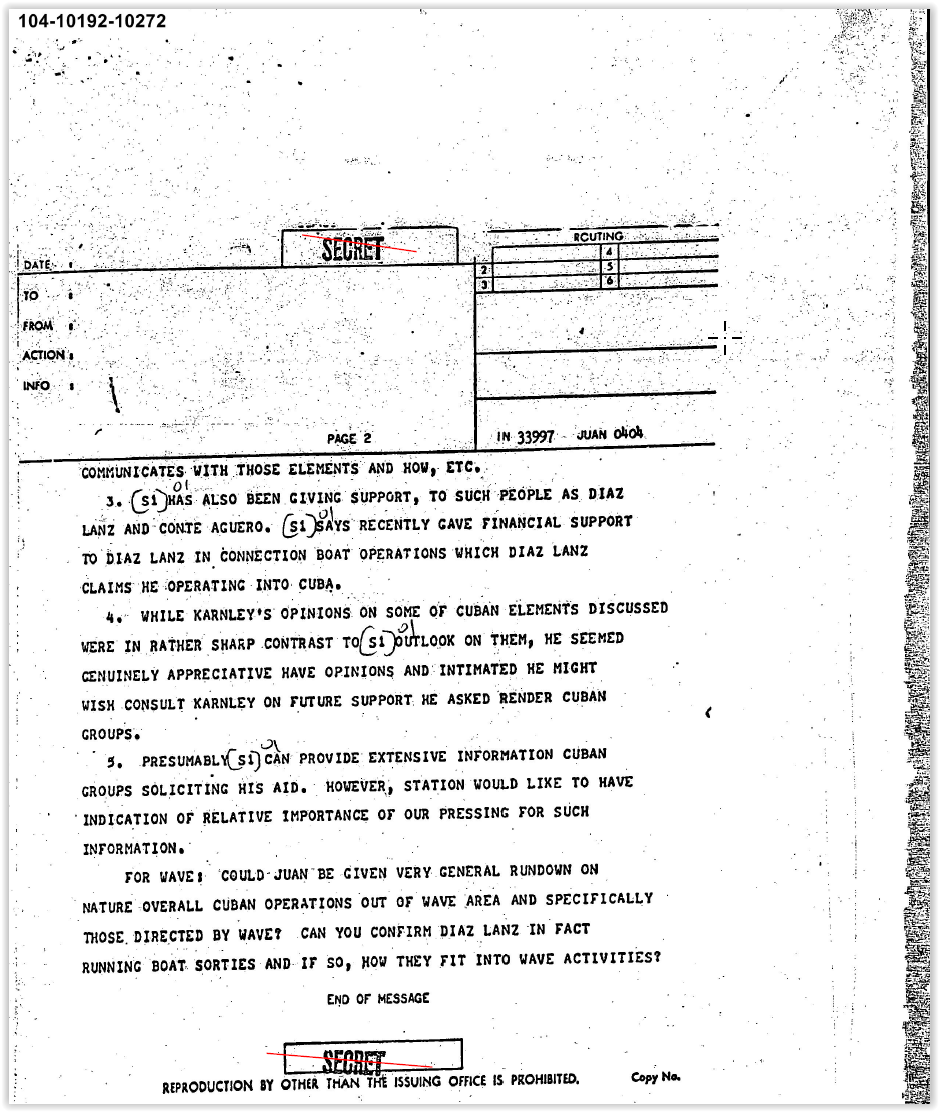 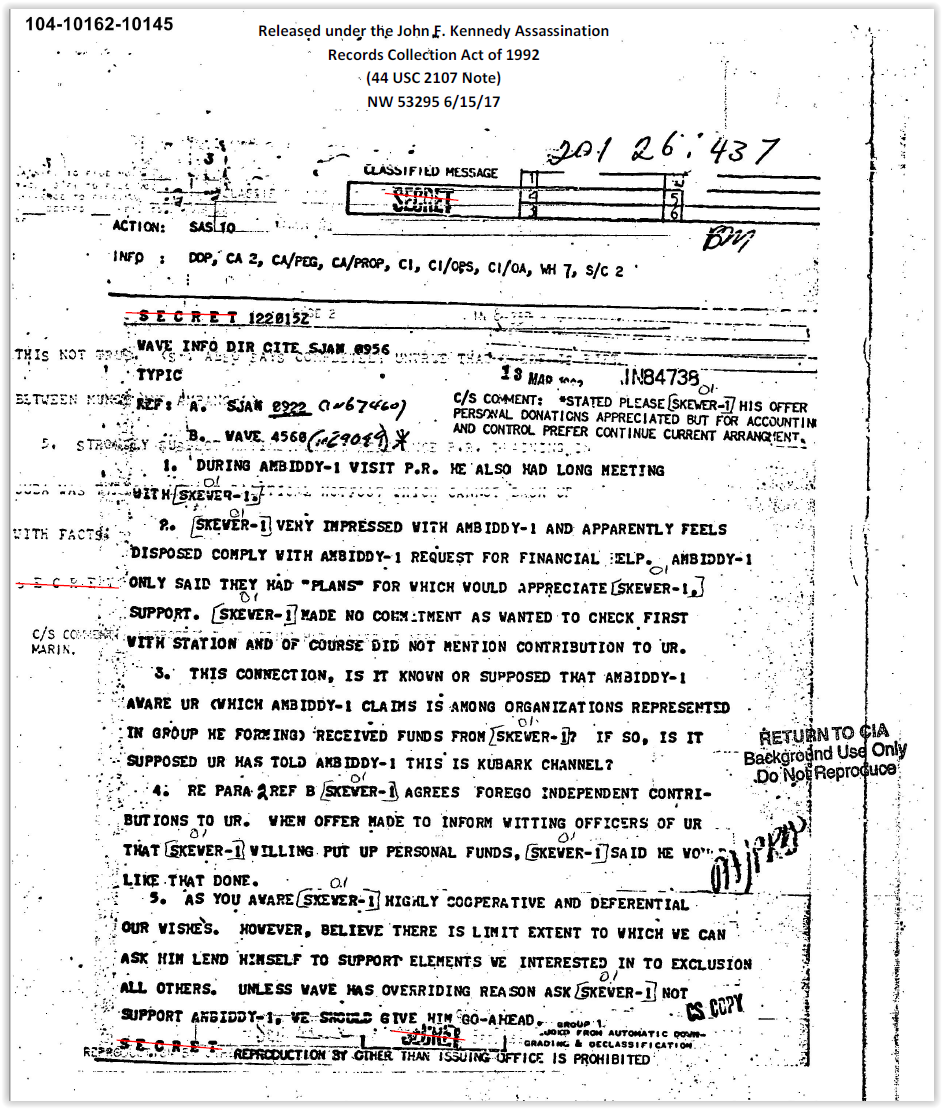 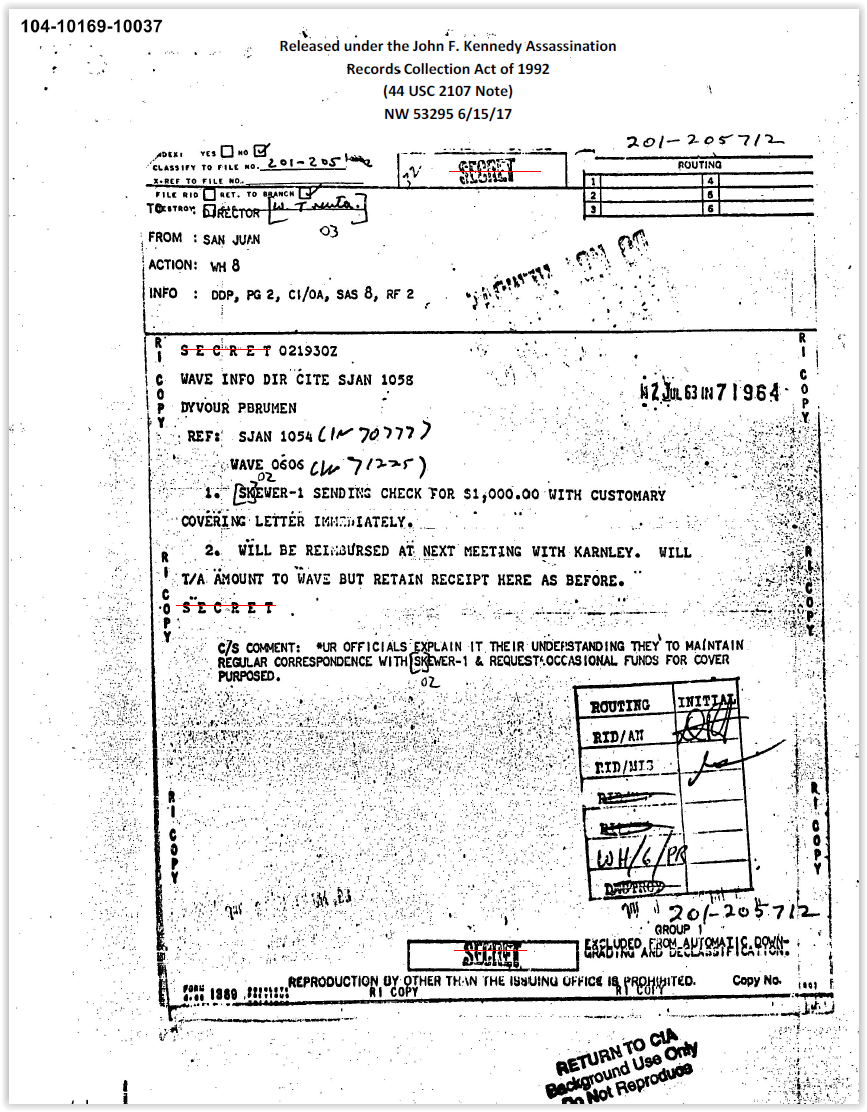 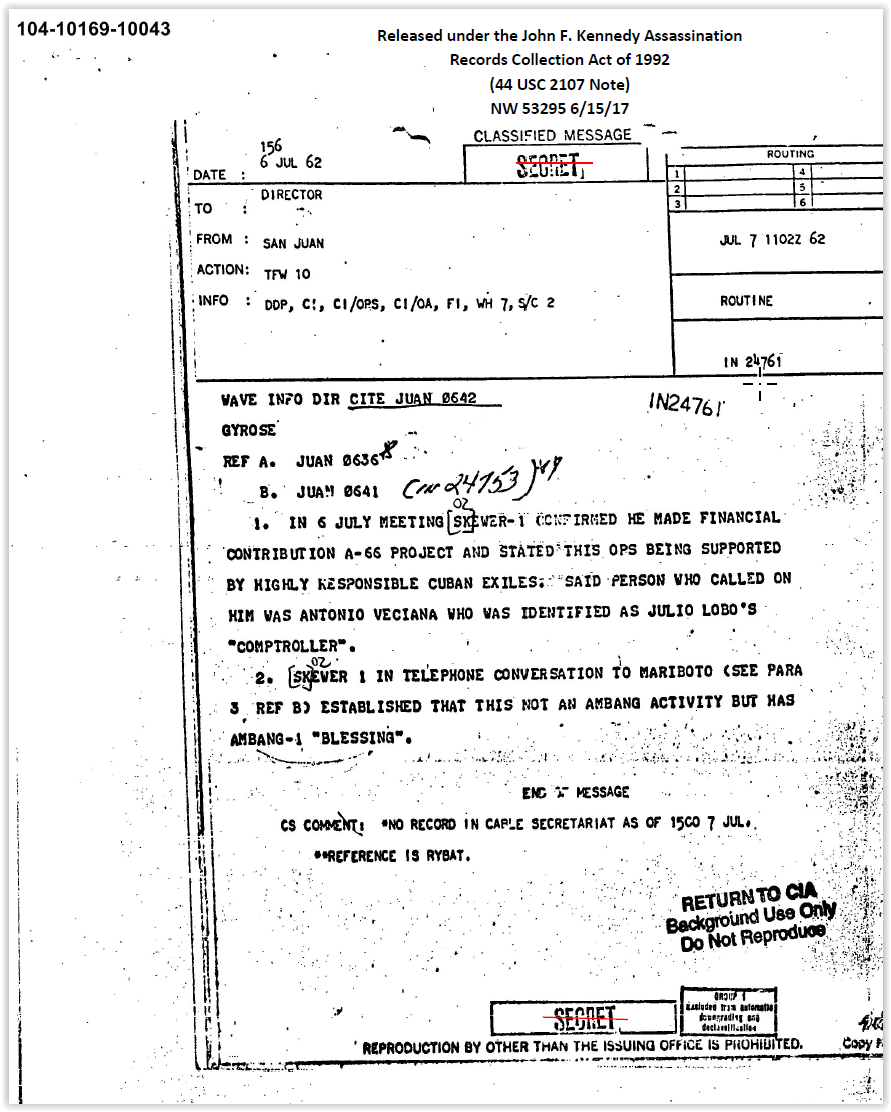 The clue that cracked the code

In this batch of files we found 104-10179-10156A, which is an agency report written by Alfonso Rodriguez, addressed to “Chief, Task Force W”.  The many references to SKEWER-1 describe a wealthy “industrialist” who has a soft spot for the exile movement, and financially supports all efforts to overthrow Fidel Castro at any cost.  The only problem with SKEWER-1 is that he is extremely visible in Puerto Rico,  prompting any and all Cuban exile groups to approach him for financial aid.  He is thrust into the precarious situation of having to discern which group is legitimate and really working for the agency.  SKEWER-1 is therefore extremely conscious  of his cover not being blown. For instance, point 3 below reads: “SKEWER-1 then readily agreed setup NAUMAN/AMBANG-1 meeting in manner not divulge agency connection.” 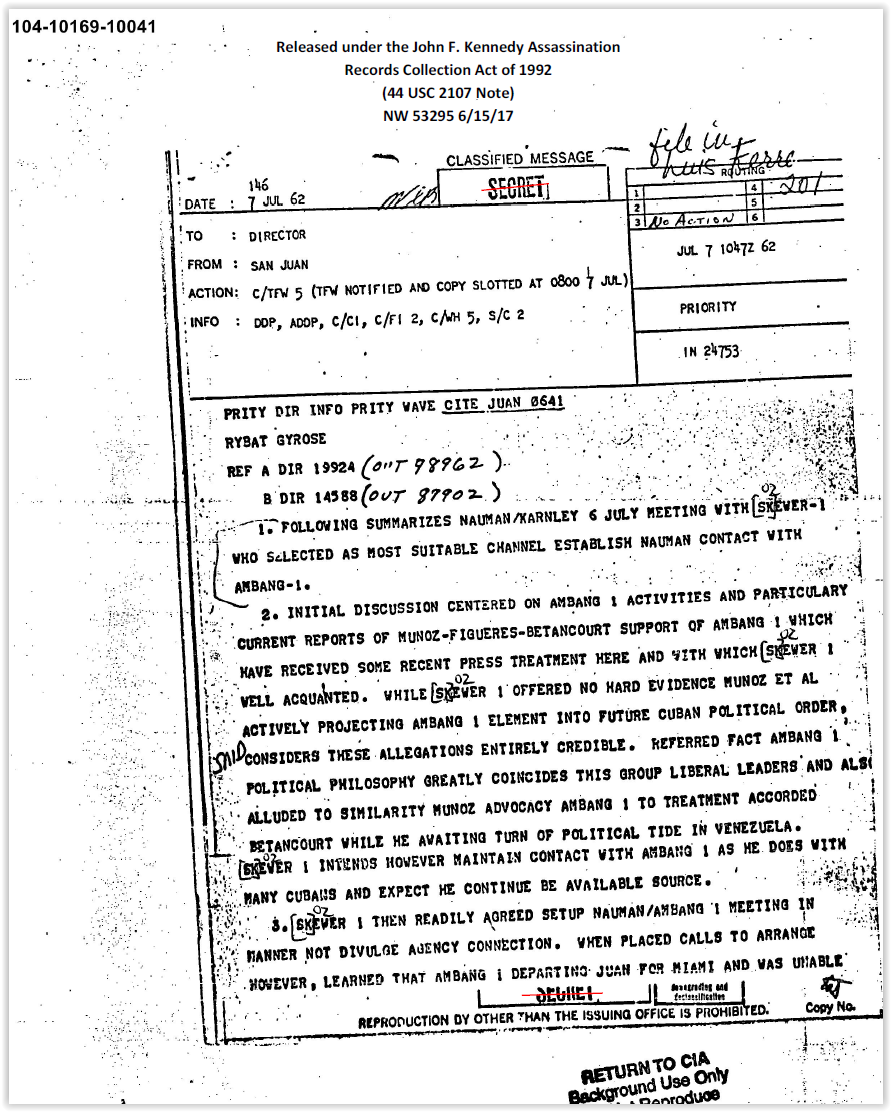 But this document is even more provocative because it reveals the existence of a three country “triumvirate” which favored Manuel Ray as the next president of Cuba once Castro was removed from power. The Munoz-Figueres-Betancourt group mentioned above consisted of:  Luis Muñoz Marín – First elected Governor of Puerto Rico and founder of the “Commonwealth, Free Associated State” which has maintained Puerto Rico as the world’s only colony into the 21st century, Jose  Figueres Ferrer –  President of Costa Rica, and Rómulo Betancourt – President of Venezuela, and personal friend of Muñoz Marín.

I have pored over all documents relating to SKEWER-1 and have found that they have gone out of their way to protect his identity – except for this one key reference to the city of Ponce (F): 104-10179-10156A 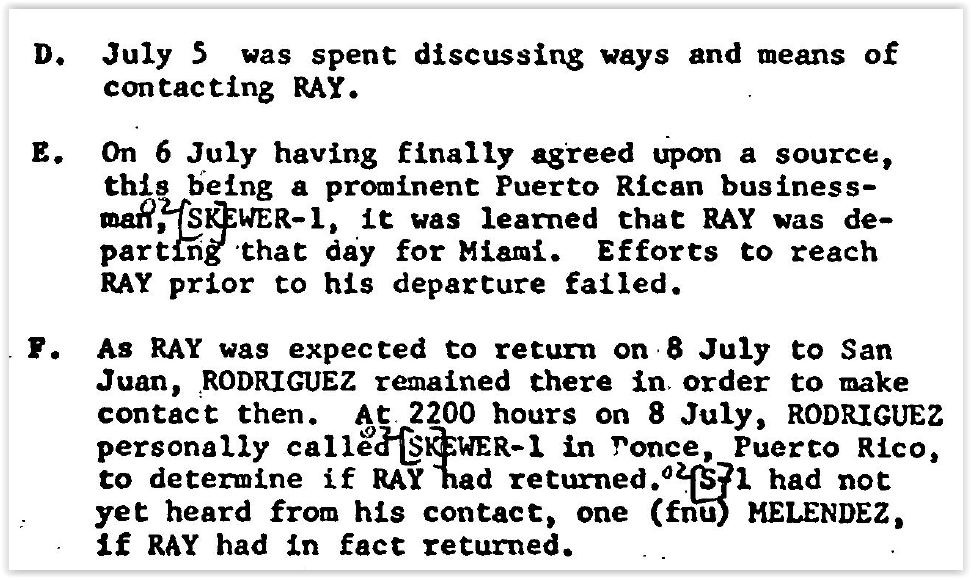 In the first half of the 20th century, Puerto Rico was considered the “Poor House of the Caribbean”.  It took a major industrialization effort and special Puerto Rico Government subsidies in the 1950’s and U.S. Government Tax incentives in the 1970’s (Section 936) to abate the mass migration of the 1940’s and 50’s to New York and other cities, of islanders seeking a better life in the U.S.   Ponce, on the South coast, is the second largest city on the island.  Before the construction of Interstate 52, which now connects Ponce to the capital city of San Juan, it took 4 hours to cross the central mountain range, as one had to traverse miles and miles of endless winding single lane roads to get there.  If one wanted to be inaccessible, Ponce would have been the place to be.  In a future post, we will expand on this.

Ponce is also the birthplace of Puerto Rico ex-Governor Luis A. Ferré.  Ferré’s father Antonio, migrated at a young age from Cuba in the late 19th century to Ponce, Puerto Rico.  Antonio Ferré settled in Ponce, started the family business, and married into what could be considered high society at the time.  Luis A. Ferré, who was half Cuban, graduated from MIT in 1925 and immediately joined the family business, which later expanded to monopolize cement production on the island:

The Ferré family is still considered one of the wealthiest on the island.  So, when we encounter a document that describes a “prominent Puerto Rican businessman”, who happens to live in Ponce, all kinds of bells and whistles go off because there is only one person who fits the profile: Luis A. Ferré.

A cursory search of documents mentioning Ferré at Mary Ferrell yields quite a few.  We begin with a mention of a 201 CIA file in Ferré’s name, number 201-205712: 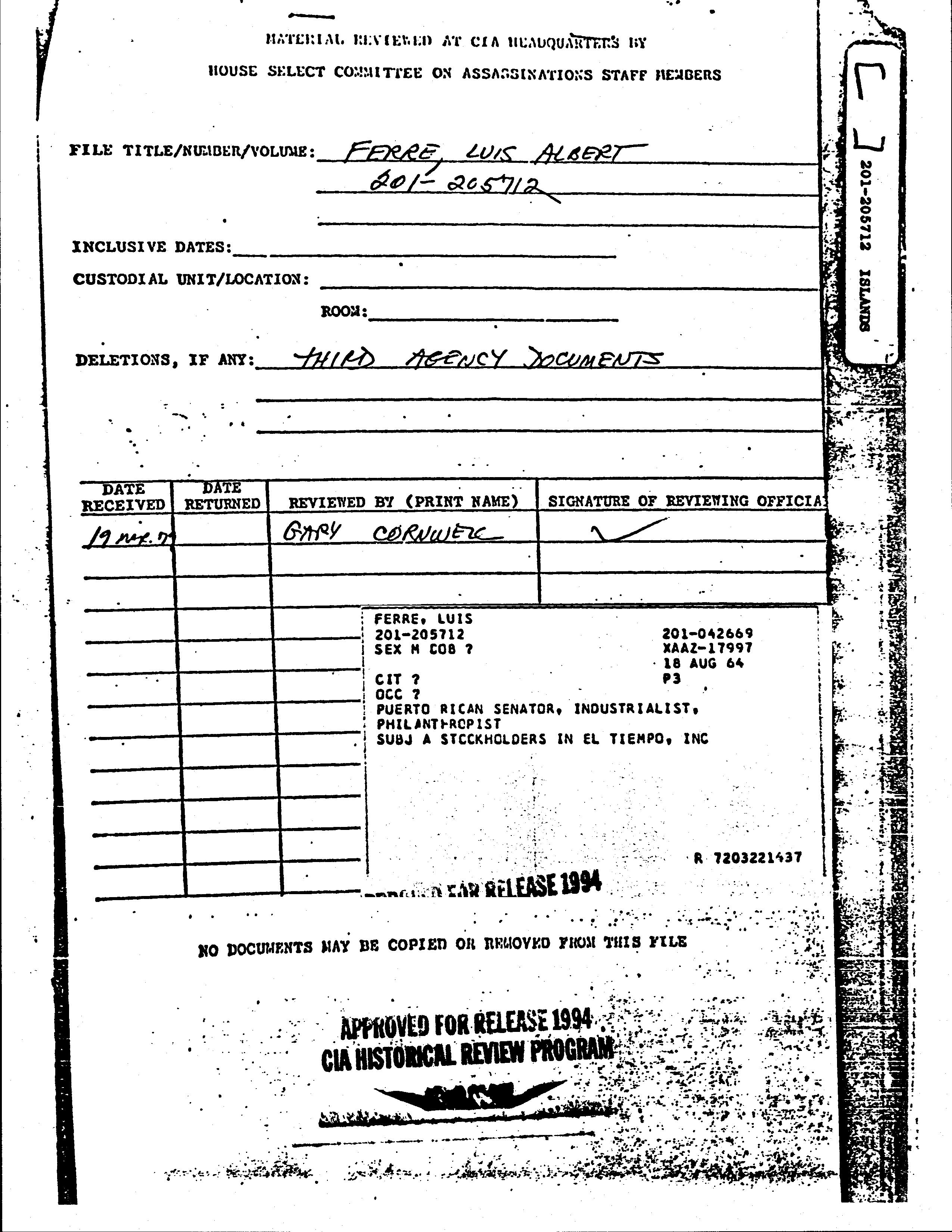 This next document minces no words in identifying the “Puerto Rican Industrialist”, however, it stops just short of identifying him as “SKEWER-1”. 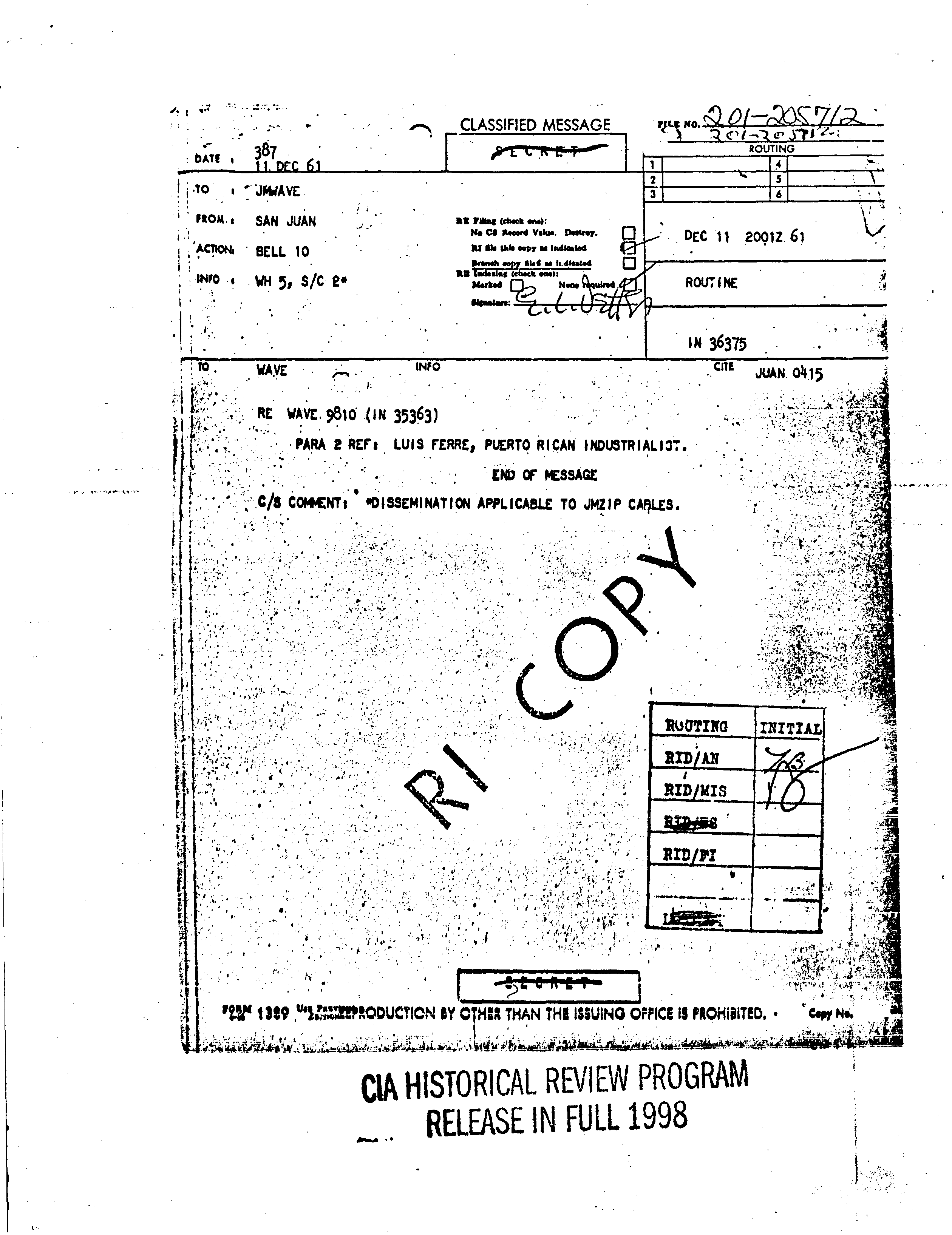 In 1978, Gaeton Fonzi wrote a report for the HSCA which covered the most important anti-Castro organizations that were operating in the early 1960’s:  CRC, Brigade 2506, DRE, ALPHA66, MDC, JGCE, and MIRR.  (Fonzi also thoroughly covered the “Odio Incident” on page 69 of his report).  On page 136, in the ALPHA66/Antonio Veciana section, we find this intriguing passage, which was added in longhand: 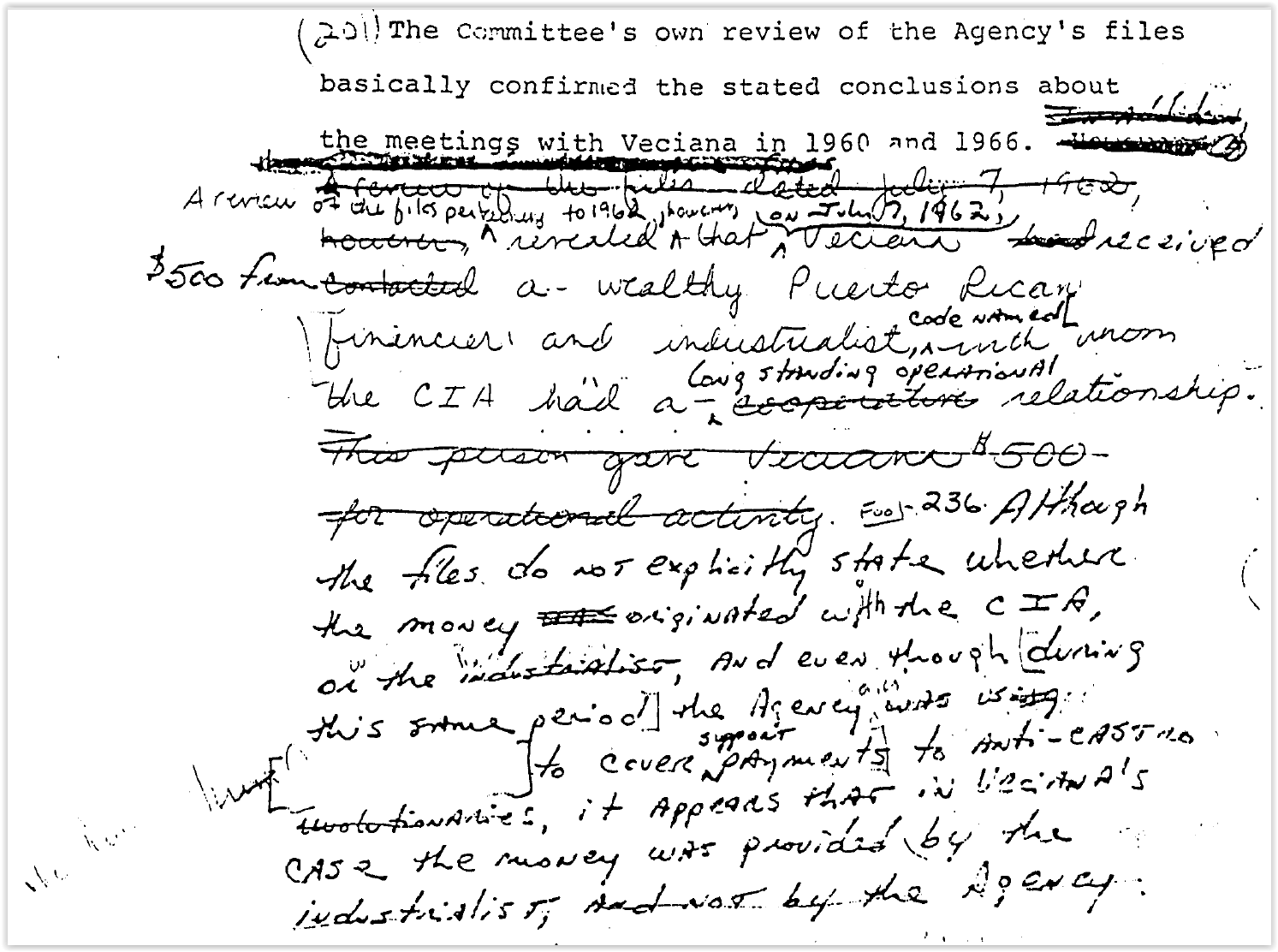 “A review of the files pertaining to 1962, however, revealed that on July 1962 Veciana received $500 from a wealthy Puerto Rican financier and industrialist, code named L, with  whom the CIA had a long standing operational relationship.  Although the files do not explicitly state whether the money originated with the CIA or the industrialist and even though during this same period the Agency was using [            ] to cover support payments to anti-Castro revolutionaries, it appears that in Veciana’s case, the money was provided by the industrialist, and not by the Agency.”  By the way, this information is exactly what the cable shown above is referring to.

The connection is quite clear and obvious.  Former Puerto Rico Governor Luis A. Ferré was a CIA asset who went by the Cryptonym  SKEWER-1, and who actively helped protect and advance the interests of anti-Castro Cubans.

What seems ironic and comical, however, is that those who sanitized this file took extraordinary measures to hide his identity, only to see the National Archives publish this index, which clearly cross references the file to Luis A. Ferré:  https://www.archives.gov/research/jfk/2017-release?page=453&sort=asc&order=File%20Num

Here are sample pages from this file: 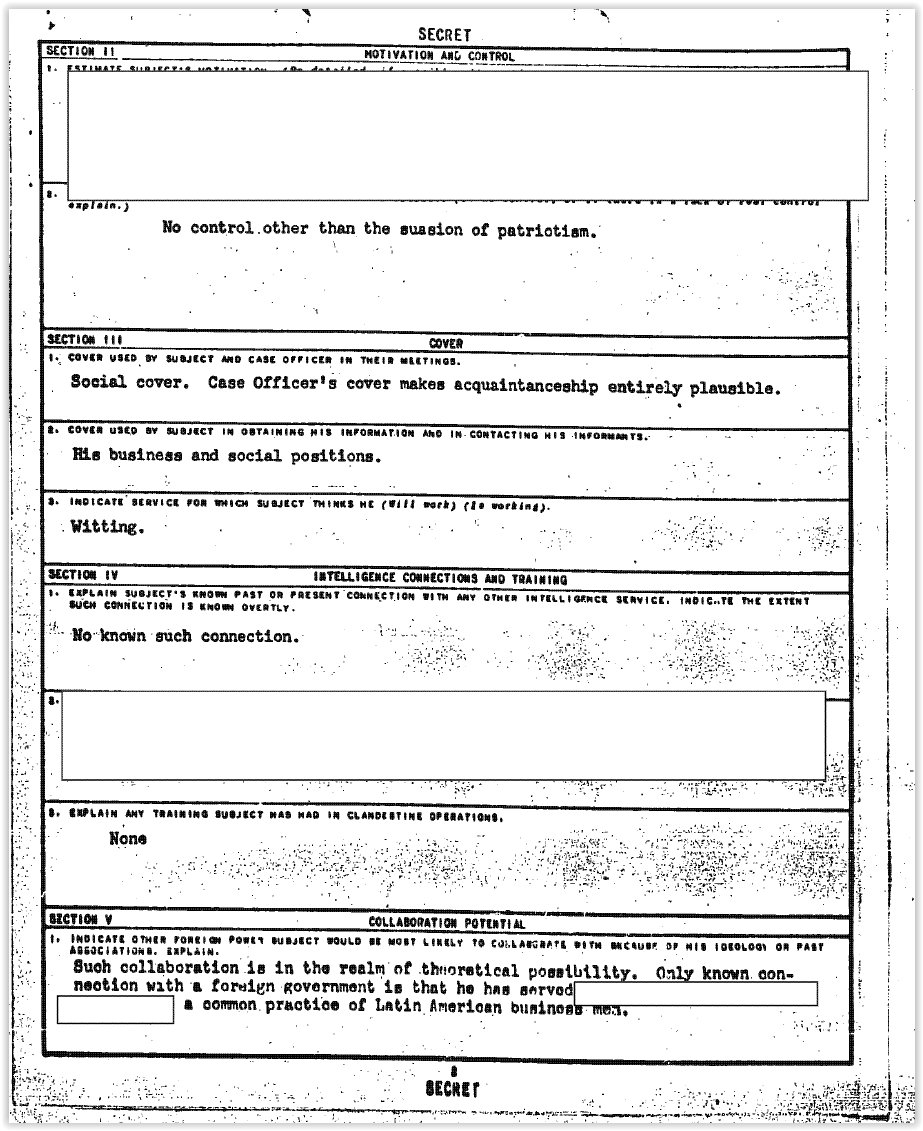 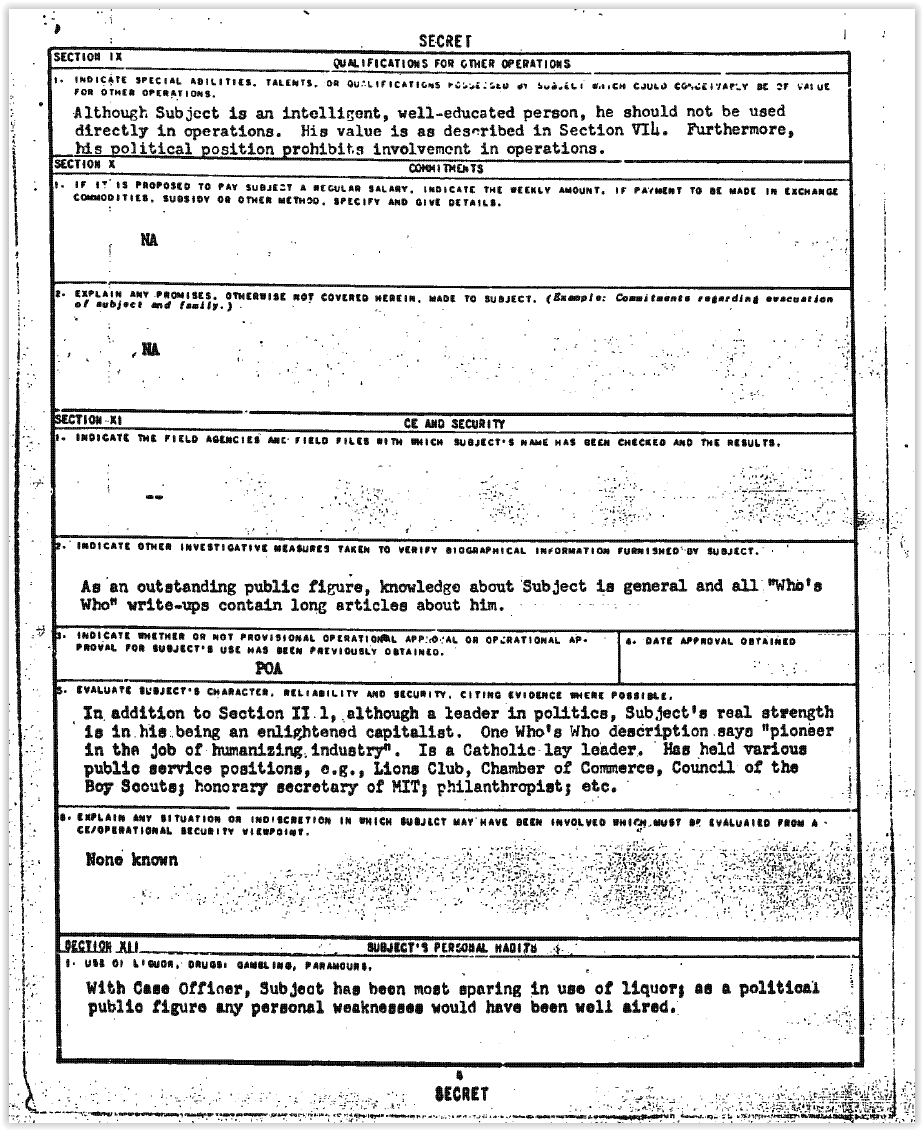 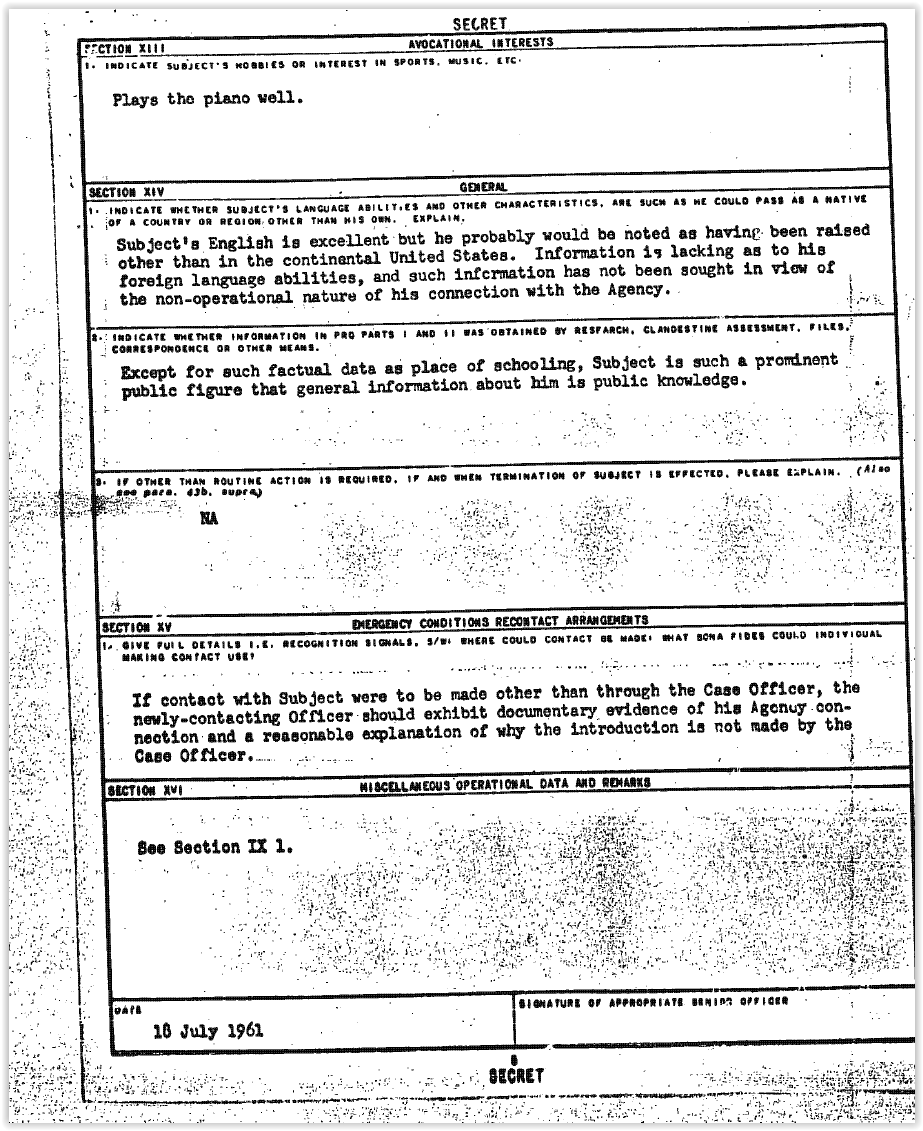 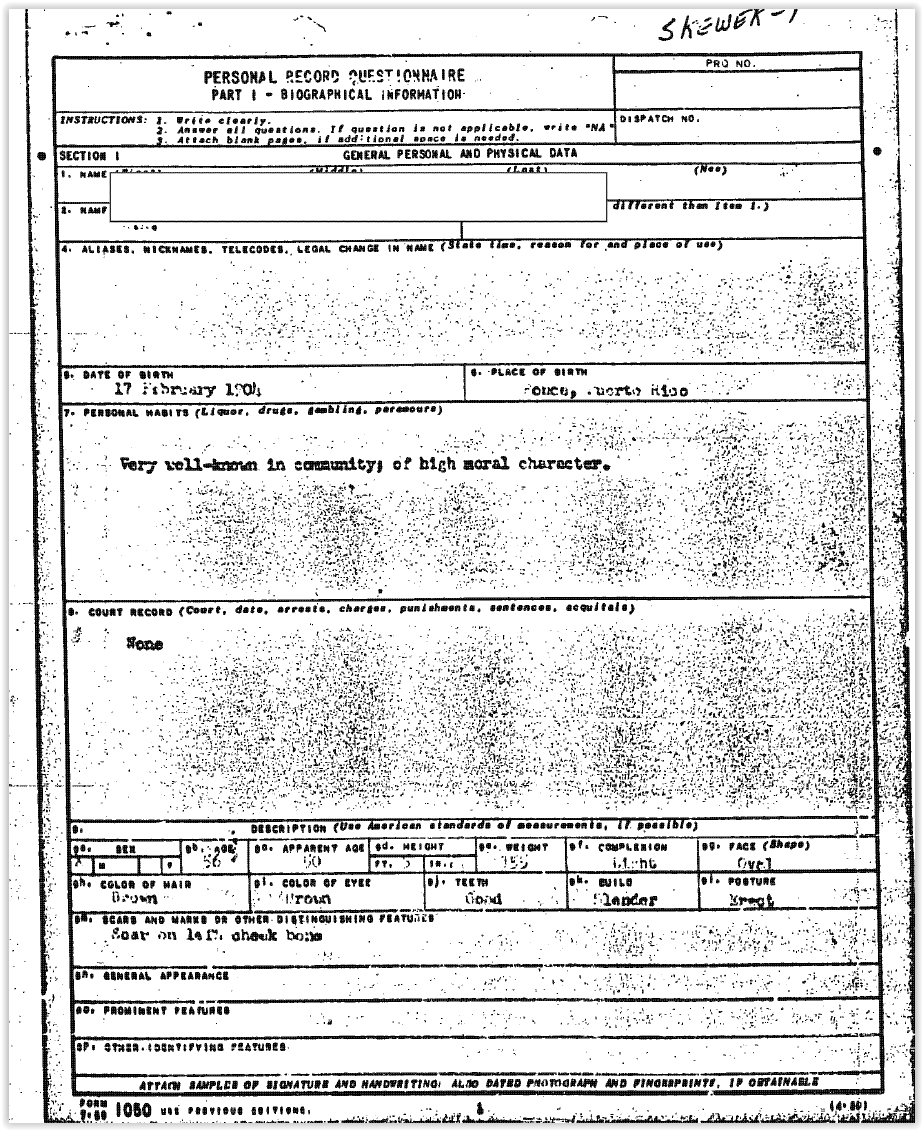 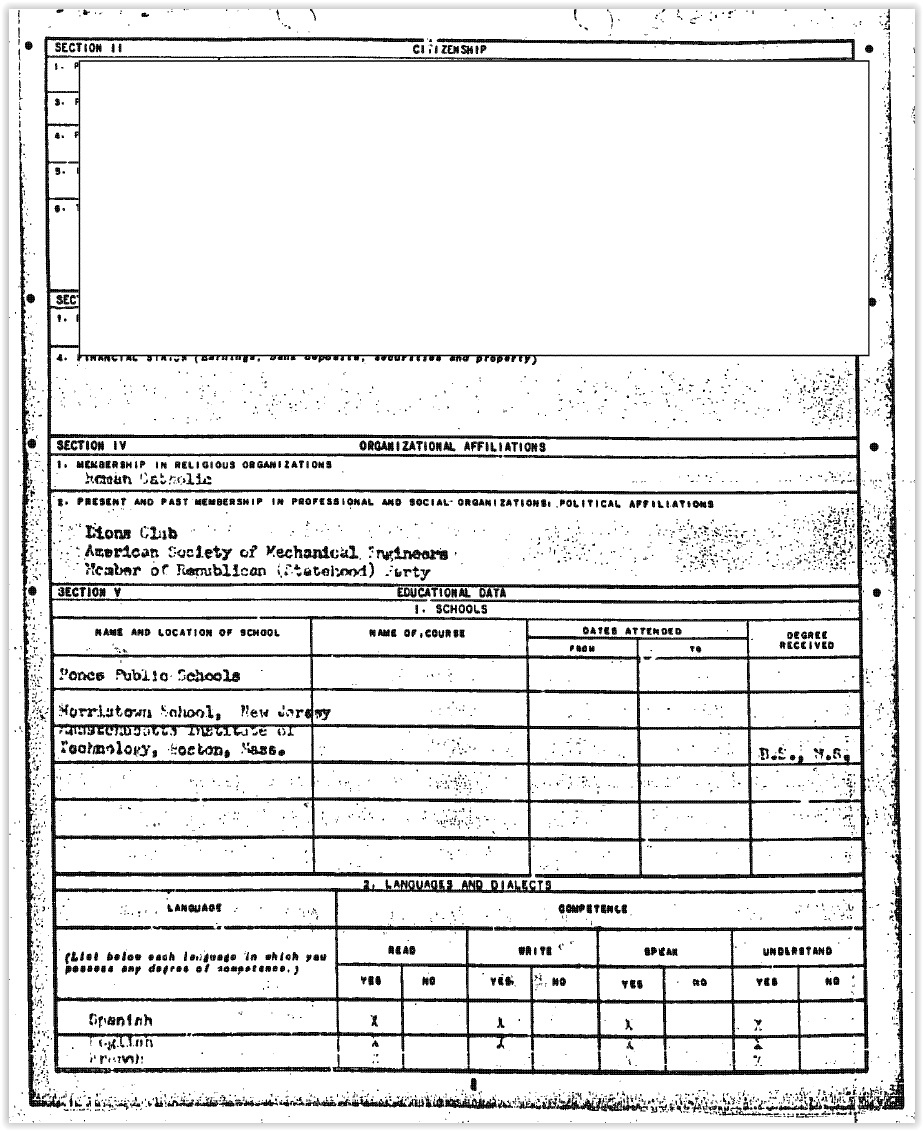 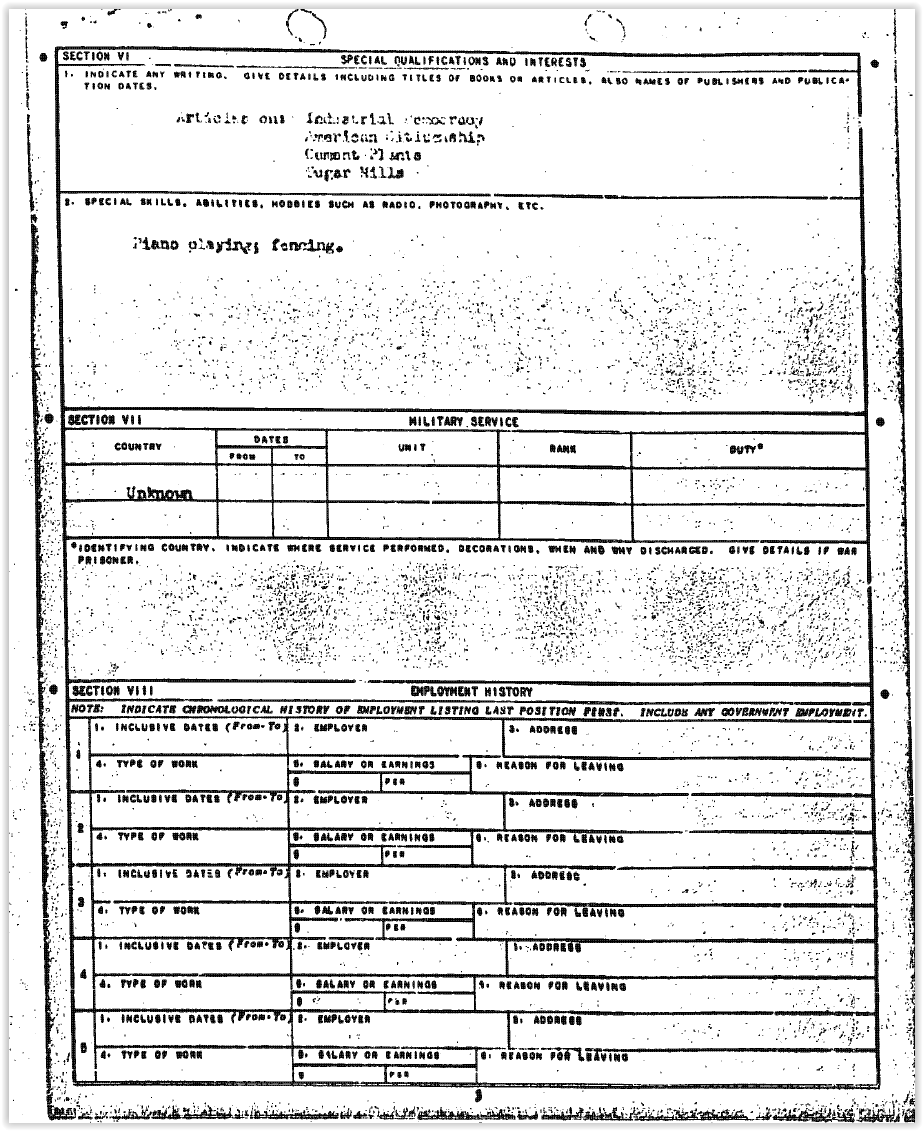 The reader will note the file is redacted in many key areas, in some cases, entire pages.  What covert activities could Ferré have been involved in which would have warranted this? We might never know, however, his deep involvement with the Cuban exile groups detailed here probably could offer a clue.

Our next post will discuss the relevance of a direct connection between the Ferré family and one of the most important witnesses of the JFK assassination.