In an indirect manner, the assassination of Malcolm X (Malcolm Little) is to be reopened as a result of the vast exposure given by the Netflix 6-part Documentary (docu-series) “Who Killed Malcolm X”, which debuted recently. The timing of this documentary is surely meant to coincide with the 55th anniversary of his death coming up on 21 February 2020.

As seen with the assassinations of the 1960s, each had a patsy to blame for the deed.  The storyline of the documentary “Who Killed Malcolm X”  takes the viewer through many angles and perspectives and reveals that at least four other assassins from the Nation of Islam (NOI) Mosque 25 in Newark, New Jersey, were involved and never brought to justice.   The star of the Netflix Documentary, Abdur-Rahman Muhammad, among several blockbuster revelations,  has identified two key patsies who actually went to jail for over 20 years as punishment for what they allegedly did.  In the case of Malcolm X, one Talmadge Hayer, was truly and genuinely found guilty and in the government’s haste to convict, it appears that both patsies were measured using the same evidence that convicted Hayer.  These gentlemen were Norman 3X Butler (Al-Aziz) and Thomas 15X Johnson (Khalil Islam)  from NOI Mosque Number 7 in Harlem.  As a result of the Netflix documentary, The Innocence Project has agreed to bring Butler’s case,  survivor of the two, to the attention of  Manhattan District Attorney Cyrus Vance Jr. to re-investigate and review the evidence.  Full exoneration of the 81-year-old Butler is the goal.  This is unprecedented and has raised the hopes of justice for those who find the murder of Malcolm X as the vilest and most despicable assassination of the 1960s.  Clearly, discovery in the form of an honest review of the evidence, affidavits and even interviews with surviving people who witnessed the events at the Audubon on 21 February 1965 would help put the case into perspective and perhaps jazz up some memories. In the case of Hayer, and as explained in the documentary, in the 1970’s William Kunstler, the famous civil rights attorney, took up Hayer’s cause to reopen the Malcolm X investigation even petitioning Congress to do so based on a key affidavit he was able to obtain from Hayer. In this affidavit, Hayer laid out the entire operation, naming the other four co-conspirators – Benjamin Thomas, Leon Davis, William X Bradley, and Wilbur McKinley.

The documentary tells the viewer that perhaps the most important revelation by Mr. Muhammad has to be his tenacious and unyielding pursuit and identification of Al Mustafa Shabazz – previously known as William X Bradley – as the so-called “Shotgun man” who executed Malcolm X with a point-blank shotgun blast to the heart.  Even today as Muhammad has discovered, the Newark Muslim African American community lives in fear of speaking about Bradley, some even commenting that he was protected by the state until his death in 2018, where his involvement was a well-kept secret.

Some of the information presented in the Netflix documentary has previously been covered by Omar Shabazz in his 3 part trilogy The black Zapruder Trilogy: the murder of Malcolm X, a very well researched and presented video analysis which introduces actual models of the Audubon Ballroom as it was on the day of the assassination. Shabazz, by the way, obtained the information regarding Bradley from Abdur-Rahman Muhammad, who as early as 2010 denounced the participation of Bradley in the assassination of Malcolm X (see Marable pg 476).  Inexplicably, however, Abdur-Rahman had at least eight years to confront Bradley, but he never did. The reference to Zapruder is noted as a parallel between the JFK and Malcolm X assassinations which underscores the fact that both cases contain famous film footage that has been studied for decades.  Below are model representations showing inside the Audubon Ballroom at the time of the assassination: 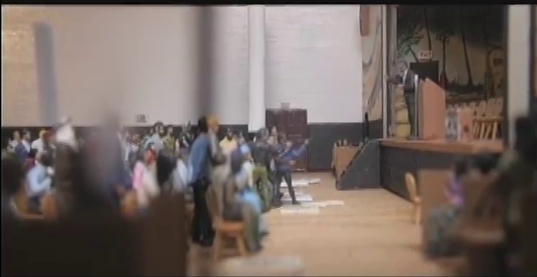 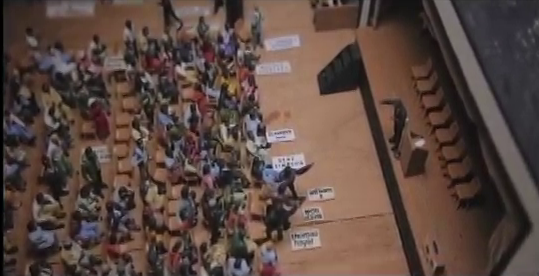 The following image is a composite representation of “Shotgun man” by Omar Shabazz captured from his video mentioned above.

….and this is the description of “Shotgun man” from this FBI document page 97 as cited by Abdur-Rahman Muhammad in the Netflix documentary .

This next image from the actual historical film, also presented in the Netflix documentary, shows Bradley outside the Audubon Ballroom in a scuffle with police and Malcolm X supporters, as he tries to come to the aid of his partner in crime, Talmadge Hayer.

The video cited above by Omar Shabazz assures us that Norman Butler WAS, in fact, present at the Audubon Ballroom that day, not resting his injured leg as depicted in the documentary.  Shabazz analyzes video clips of the fracas outside the Audubon where Hayer was almost beaten to death and offers compelling evidence that Butler was also outside the Audubon after making his escape from the ballroom, as shown in this screen capture: 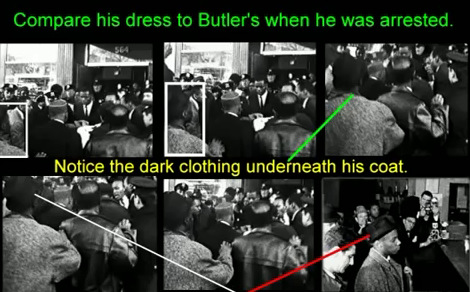 For a complete analysis of the flaws and half-truths of the documentary, please read this Karl Evanzz article.  Evanzz is an authority on the Malcolm X assassination and is the author of the book The Judas Factor: the Life and Death of Malcolm X.

Many parallels exist between the JFK and Malcolm X cases, and it would be wise to name just a few since this is a JFK assassination blog:

Believe it or not, another important Malcolm X-JFK nexus actually brought about Malcolm’s undoing and can be traced back to his comments after the JFK assassination.  Prior to JFK’s demise, Malcolm X had been a harsh critic of the Kennedy administration and its apparent lackadaisical record on Civil Rights.   This article published by the New York Times 2 December 1963 describes Malcolm’s public reaction to the JFK assassination, which brought about a 90-day suspension by NOI leader Elijah Muhammad. The story went viral nationwide via the mainstream media.

As a result of this suspension, Malcolm X splintered away and went on to form his own African American Muslim organizations, the MMI (Muslim Mosque Incorporated) and the OAAU (Organization of African American Unity) which did not require its members to be Muslims,  in the hope of galvanizing and consolidating what in his mind was the true expression of what Islamic religion should be like, and how it should apply to African Americans.  Moreover, a Pan-African model in the Western Hemisphere is what Malcolm X was proposing, where Civil Rights could truly have a chance of surviving in America. His hope of globalizing his dogma was supported by Islamic countries around the world, who received him as a virtual head of state when he visited those countries for four months in 1964.  Malcolm X was closely monitored by the CIA during this sojourn, with the fear that his views on African American oppression and discrimination would embarrass the United States in international circles.

The Nation of Islam was now bereft of its best orator and attraction.  Neither Elijah Muhammad nor any of his sons possessed the public persona that Malcolm carried.  Malcolm was sure to attract many of Elijah Muhammad’s followers, where even one of his sons, Akbar, was said to have been in complete disagreement regarding Malcolm X’s suspension and other so-called “woes”. 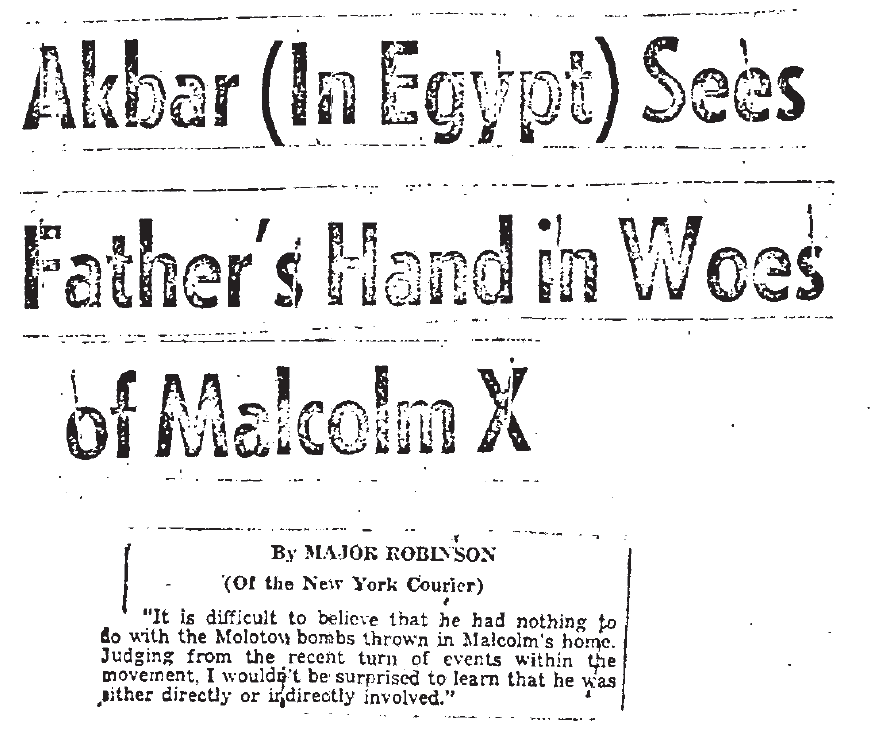 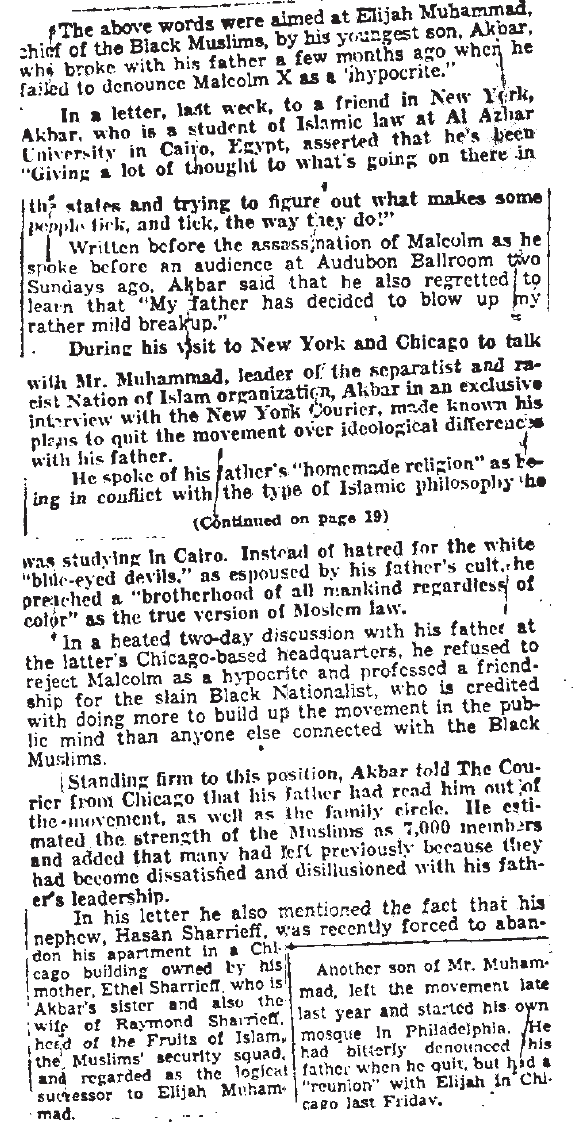 Getting back to the “chickens coming home to roost” metaphor, when the Rockefeller Commission convened in 1975, the following interpretation was offered right off the bat: 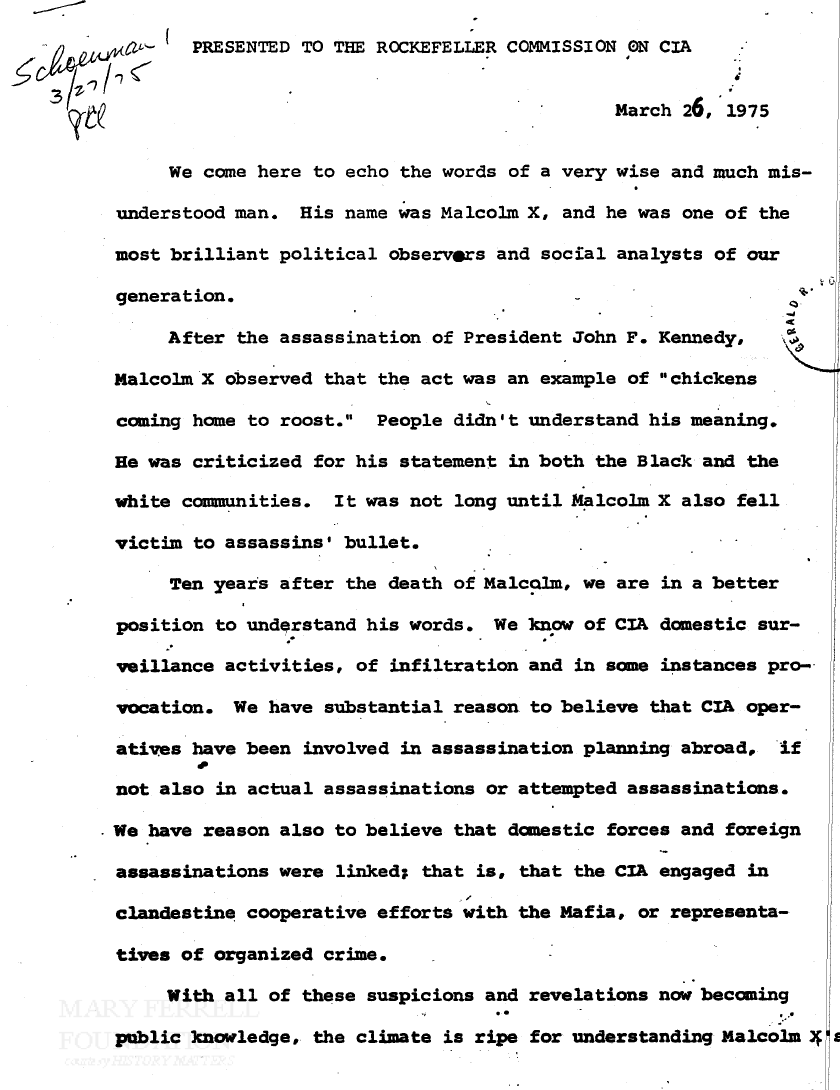 In finalizing this post I must make the observation that the online Malcolm X documents, with their heavy redactions, still provide researchers with many new leads and information that has never been published for those who want to plunge into that rabbit hole.  I have extensive experience researching JFK documents and redactions are accepted as part of the job, and researchers have had to nibble on what is left on that bone.  In the case of Malcolm X, however, even with the numerous redactions seen in these FBI documents, they reveal the incredible ongoing FBI surveillance the NOI and Malcolm X were subjected to for more than a decade, and more importantly, how  African American FBI informants were interwoven into the day to day activities of both entities.  Critical reports of the nine FBI informants present at the Audubon are embedded within these redacted documents, and as Marable writes in his volume Malcolm X, A life of Reinvention, surely the FBI would have caught the moment in which Elijah Muhammad’s lieutenants transmitted the orders to kill and it is still being masked by these redactions.

One of the most important revelations of the Netflix docu-series has to do with Malcolm secretly recording a pitch by FBI agent Arthur B. Fulton, who on 4 January 1964 attempted to offer money and recruit him to become an informant after he had been suspended by Elijah Muhammad. I  don’t have to tell you how that turned out.