A good friend, father, brother, and comrade in the JFK assassination debates has recently passed.  Even though it happened this past Christmas day (12/25/2021), I did not find out until last week, which proves that keeping a low digital footprint works.  Richard Mayn Hooke was a bulldog in everything he investigated and his contributions to the JFK assassination interpretation of this historical event should keep generations forever studying the vast amount of material he left behind. 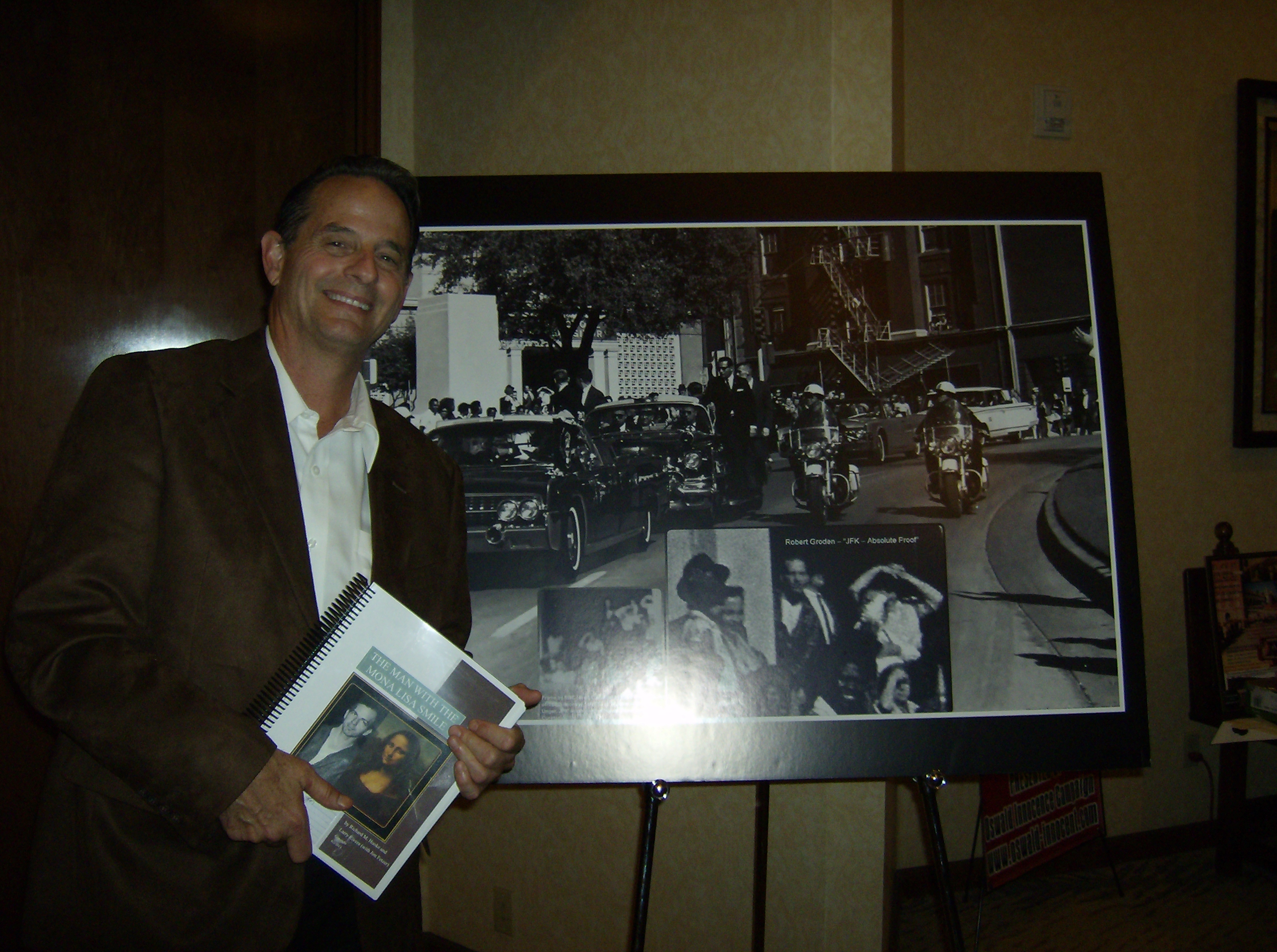 We originally met online in 2012 when the “man in the doorway” war was being waged at the old education forum.  Jim Fetzer cleverly combined Ralph Cinque’s background as a chiropractor and Richard’s in anthropology to take on those who opposed the “Lee in the  Doorway” argument.   Along with Jim Fetzer and Ralph Cinque arguing and answering post after post, they overstayed their welcome just a little too much and were soon booted out of that forum for defending Lee in the doorway of the TSBD at the time of the JFK assassination.  Here is an email dated 10/27/2012 emblematic of Richard’s ferociousness and commitment: 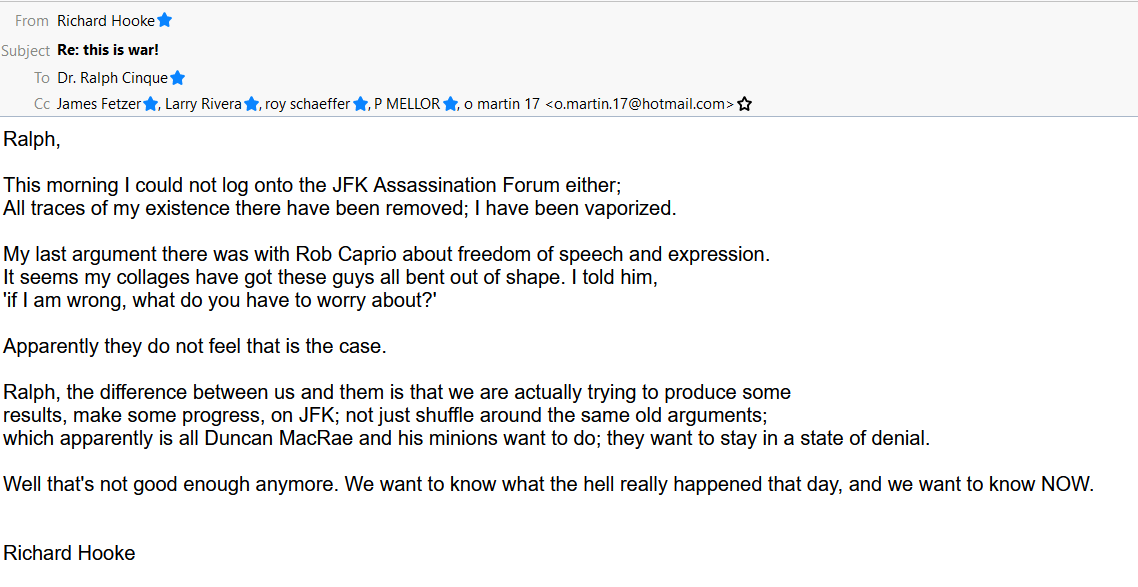 In 2012  they decided to found the Oswald Innocence Project (later renamed Campaign), with Richard Hooke, Jim Fetzer, and  Ralph Cinque the original founders of www.oswald-innocent.com which attracted the top minds in the JFK assassination investigation of the time.  First-generation JFK legends Vincent Salandria and Mark Lane joined the movement and gave it a great deal of credibility where the only mantra that was required of its members was that they agree that it was Lee Oswald in the TSBD doorway thereby rendering him completely innocent of the crime attributed to him.  Fetzer became the founding Chairman.  With Fetzer’s encouragement,  Richard and I went on to publish both our first work on JFK, “The Man with the Mona Lisa Smile”, in which I contributed preliminary versions of some of the chapters that would later be incorporated in my own book “The  JFK Horsemen”.

Richard’s background in anthropology put him in a unique position to form and pass on opinions about the man in the TSBD doorway, his distinct features, his attire, pose, etc.  His “50 Points of Light” collage was the defacto precursor of the digital forensic overlays presented by yours truly in 2015-2016 that identified Lee as “Doorman” and Billy Lovelady as “Black Hole Man”. 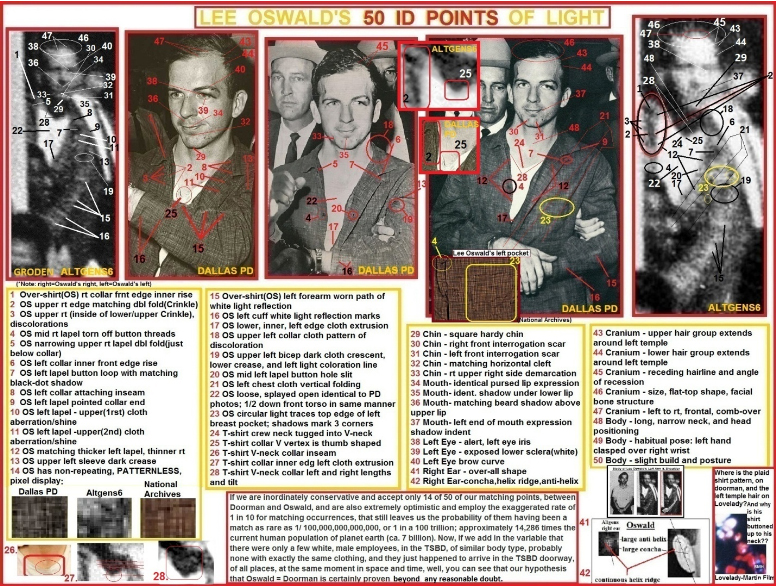 His work would later be confirmed here: 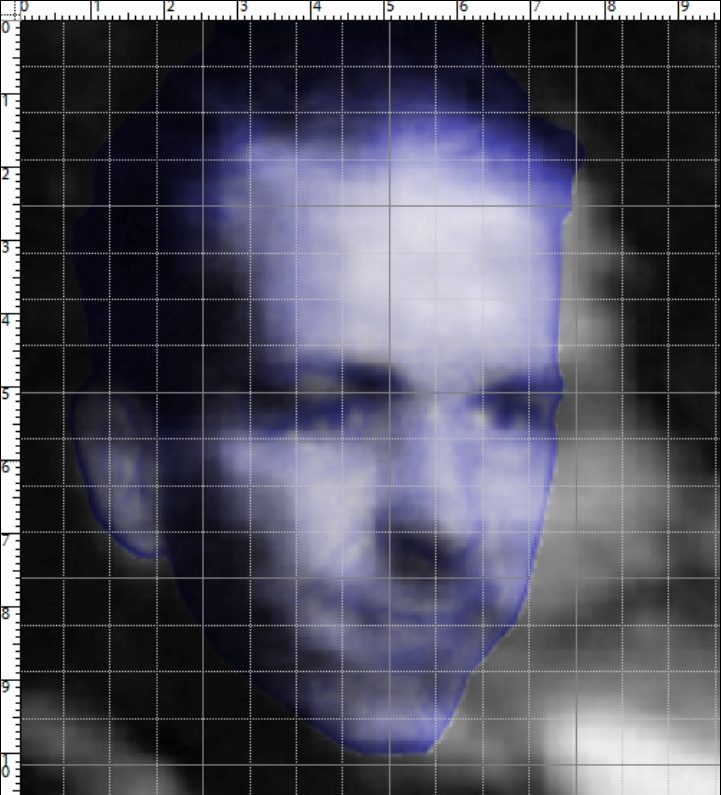 And here, where two different frontal shots of Billy Lovelady (FBI and CBS photos), were a perfect match to “Black Hole Man”, the figure seen at right in the entrance of the  TSBD visoring his eyes with both hands clasped at a distinct angle: 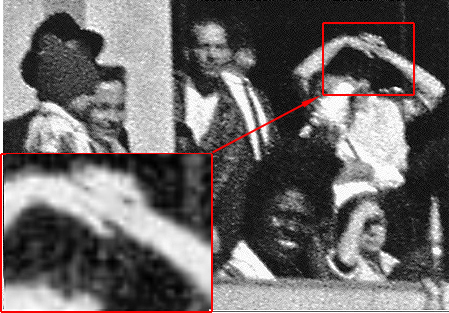 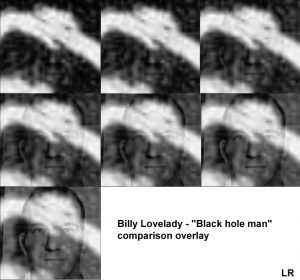 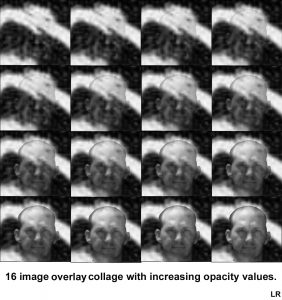 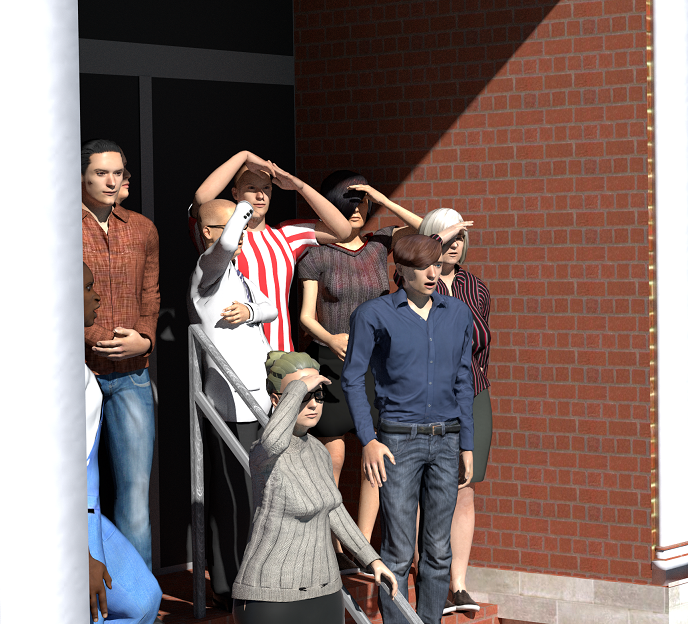 Blender rendering of the Altgens6 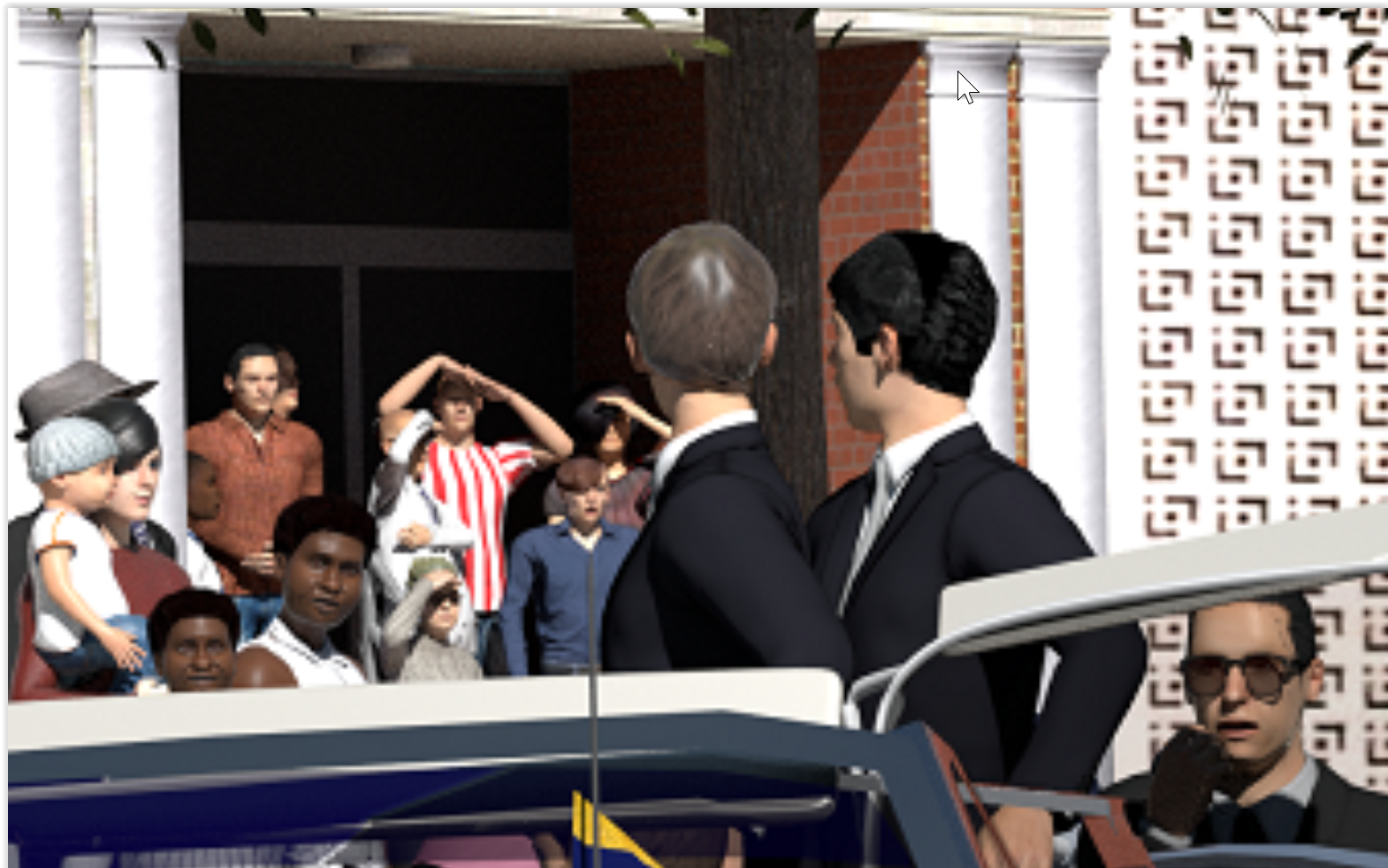 For the 50th Anniversary of the assassination in 2013, the OIC decided to hold its Conference in Santa Barbara, at the Fess Parker Hotel, of Davey Crockett fame.  The reason to get away from Dallas was the excessive influx of tourists and media into Dallas and Dealey Plaza, the “lockdown” by the police, and other inconveniences that the OIC  did not want to deal with.  Richard rented a van and drove from his home in San Rafael outside of Oakland, to haul the vast amount of collages he had blown up and constructed, setting these up on individual easels around the conference room.  I remember walking out to the parking lot with Richard to see the van and help unload it and was amazed at how he had been able to fit everything inside.  All of this came out of his own pocket, the same as he would do when he would send copies of his books to those interested in his work. 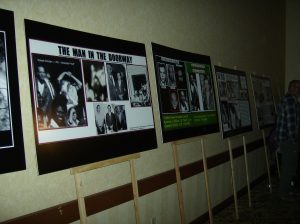 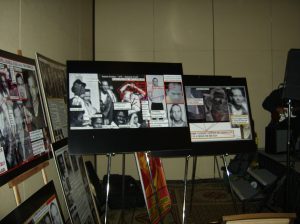 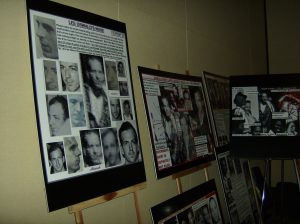 From 2012  to 2018,  I counted over two thousand individual email transmissions between the two of us.  All have been preserved, including topics, text, and attachments that were sent during this incredible time of JFK research, dubbed by Fetzer on Veterans Today as “The JFK War”.  If there was something sensitive being worked on, for example, the transcription of the Fred Newcomb tapes in 2014, I would make sure he got a copy of the progress, just in case something unexpected happened.  During this time, we spoke almost on a daily basis.  Later on, when the National Archives began to release documents in July 2017, Richard and I drifted apart as my focus became finding out what was in these new releases.

Meanwhile, Richard fought most of his battles on Facebook, where he complained about being constantly harassed by Facebook monitors who thought some of his posts were too outlandish and violated content rules.  I remember once in 2013 he suspected someone was following him, even during his visits to the local Starbucks where on a daily basis he enjoyed his coffee beverage of choice as he pored over JFK documents and his research.  Richard was a huge coffee drinker.  Having taken a picture of the individual, he went ahead and confronted him, much to the surprise and amusement of his “gumshoe”.  Another time, he told me how he had tried unsuccessfully to get his material included in the library where his sons went to school, arguing that they were suppressing the true history of the JFK assassination. Moreover, at least one of his sons put tough questions about the assassination to his teacher(s), based on what he had learned from his  Dad.

In 2015 Richard showed up in Dallas for the Lancer Conference lugging all of his wares and research.  The  Conference organizers allowed him to set up right outside the conference room.  Right behind him, a giant poster of his “50 Points of Light”: 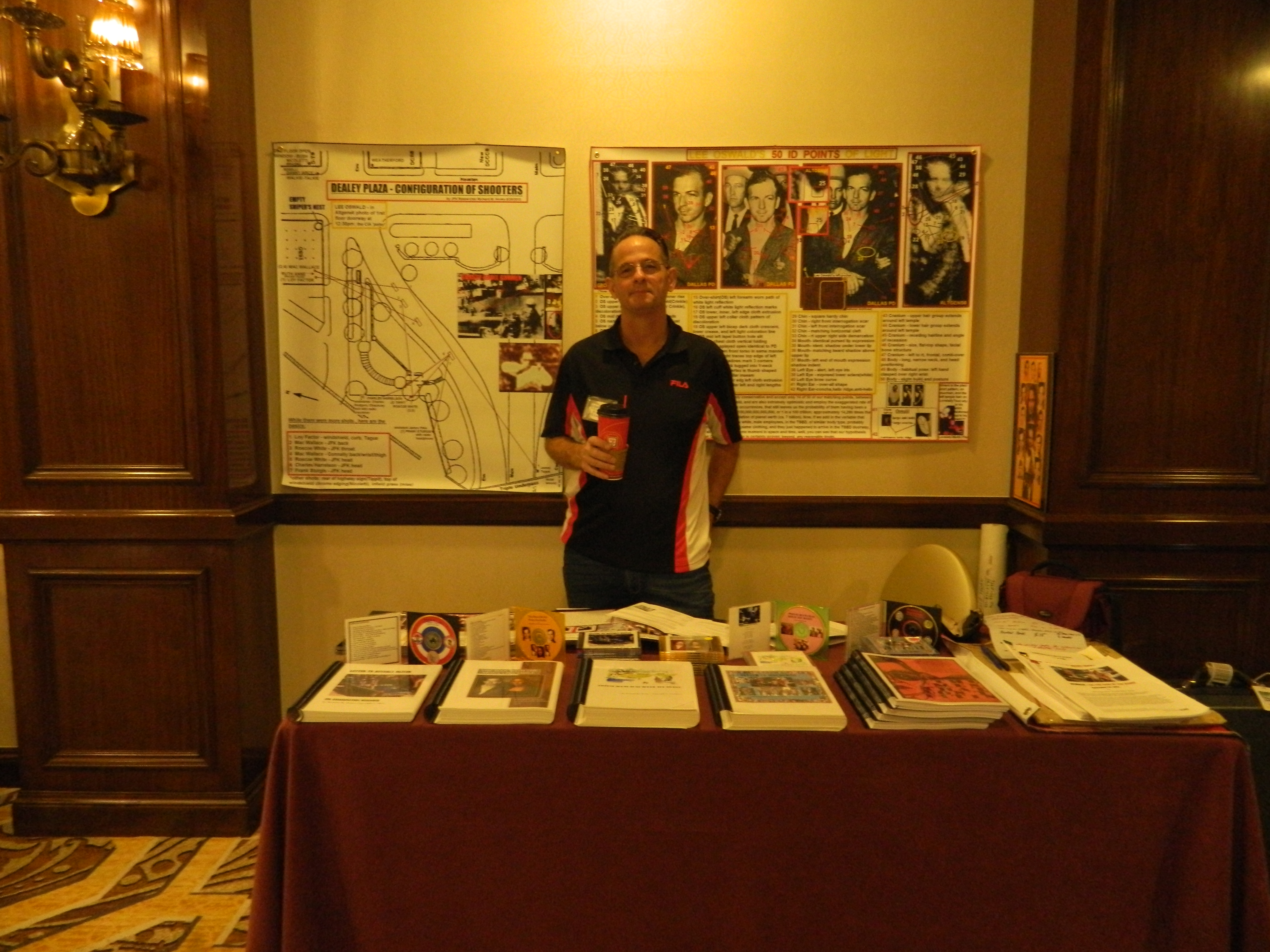 During an appearance by Buell Wesley Frazier in which Frazier erroneously named Billy Lovelady as “Doorman”, Richard decided he had heard enough and proceeded to approach Frazier in the following manner, an incident which he wrote  up in his book “The Path Toward Truth” (pg 81) 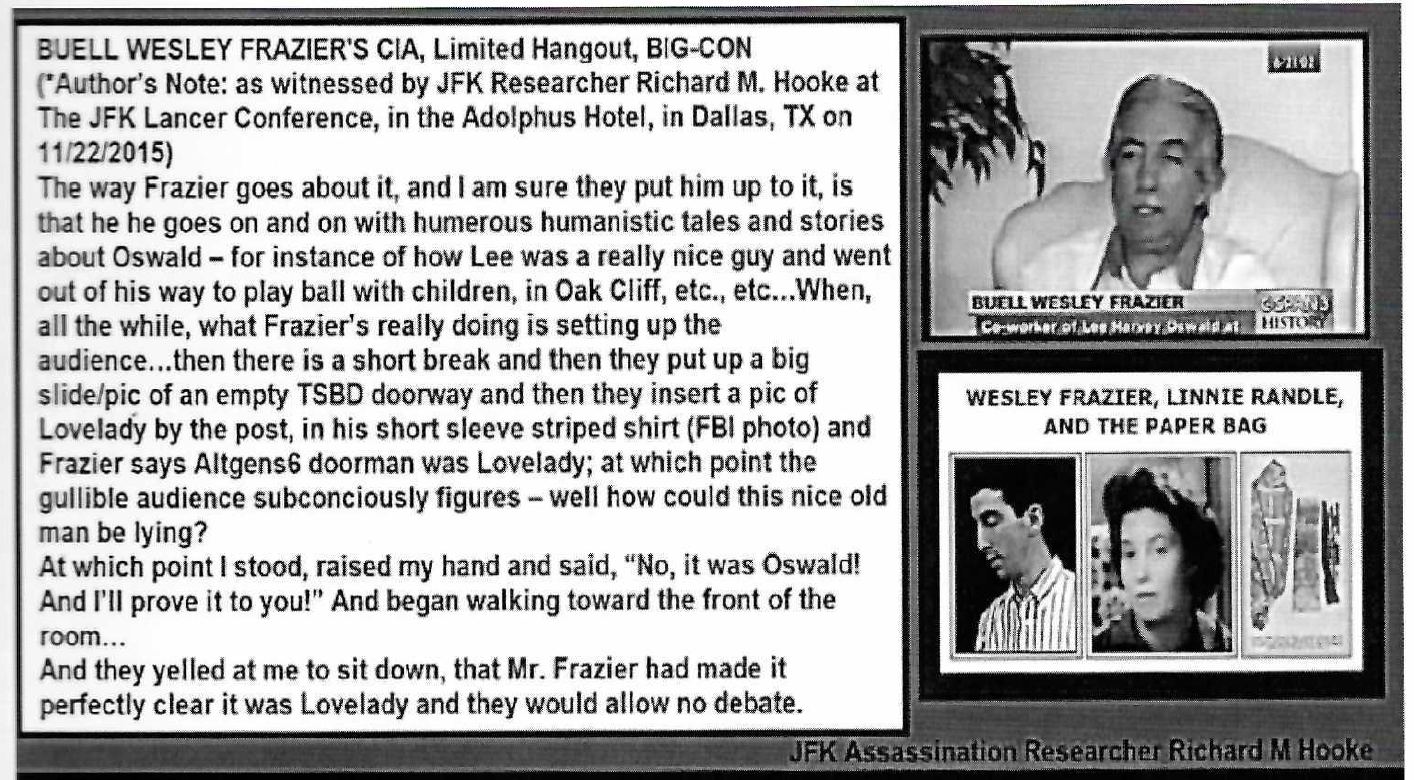 The incident included claims from Frazier’s immediate family that Richard was “working” for “Fetzer” (Jim) and turned physical when one of them poked his finger in Richard’s chest.  Needless to say, Richard was extremely distraught over the incident and retired to his room at the Adolphus and went straight from there to the airport after all activities were over.  Having heard about this from Richard himself, I offered to take him in and help him set up at Judyth Baker’s conference which I was attending myself.  He refused, however, he was available at the Dealey  Plaza 12:30 PM memorial where I snapped these two photos as he was in turn taking a photo of me taking pictures while standing on the Zapruder pedestal. 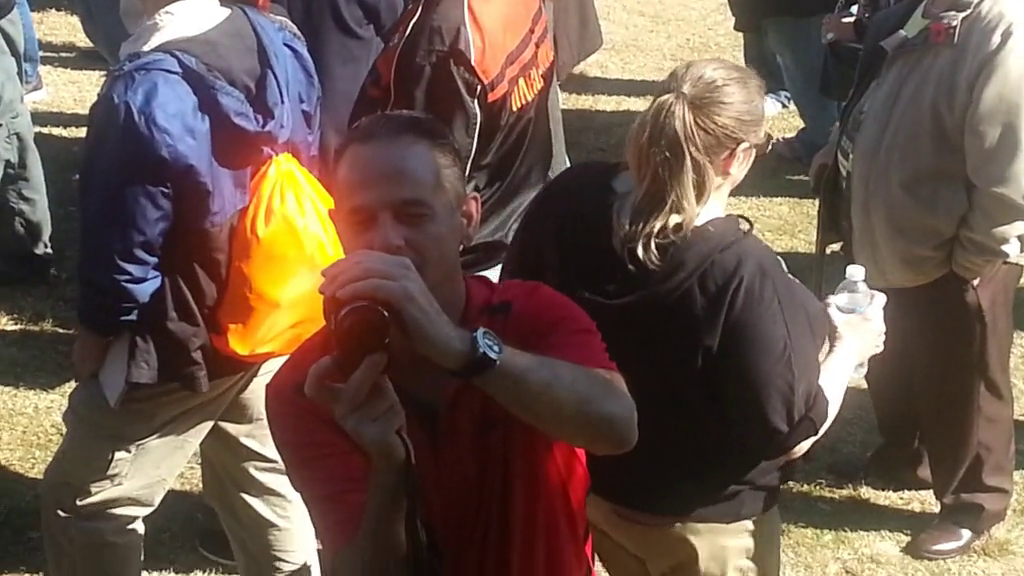 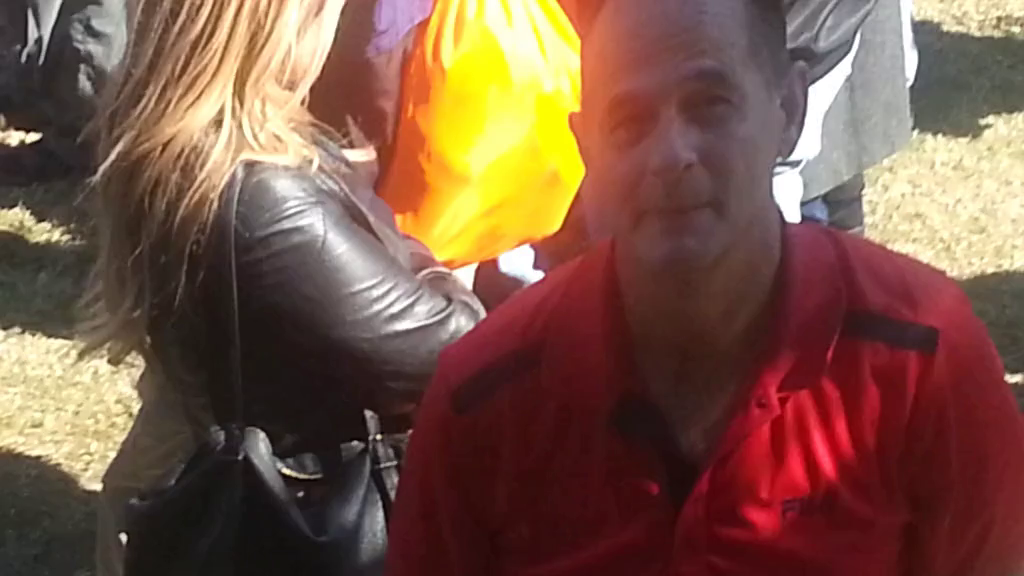 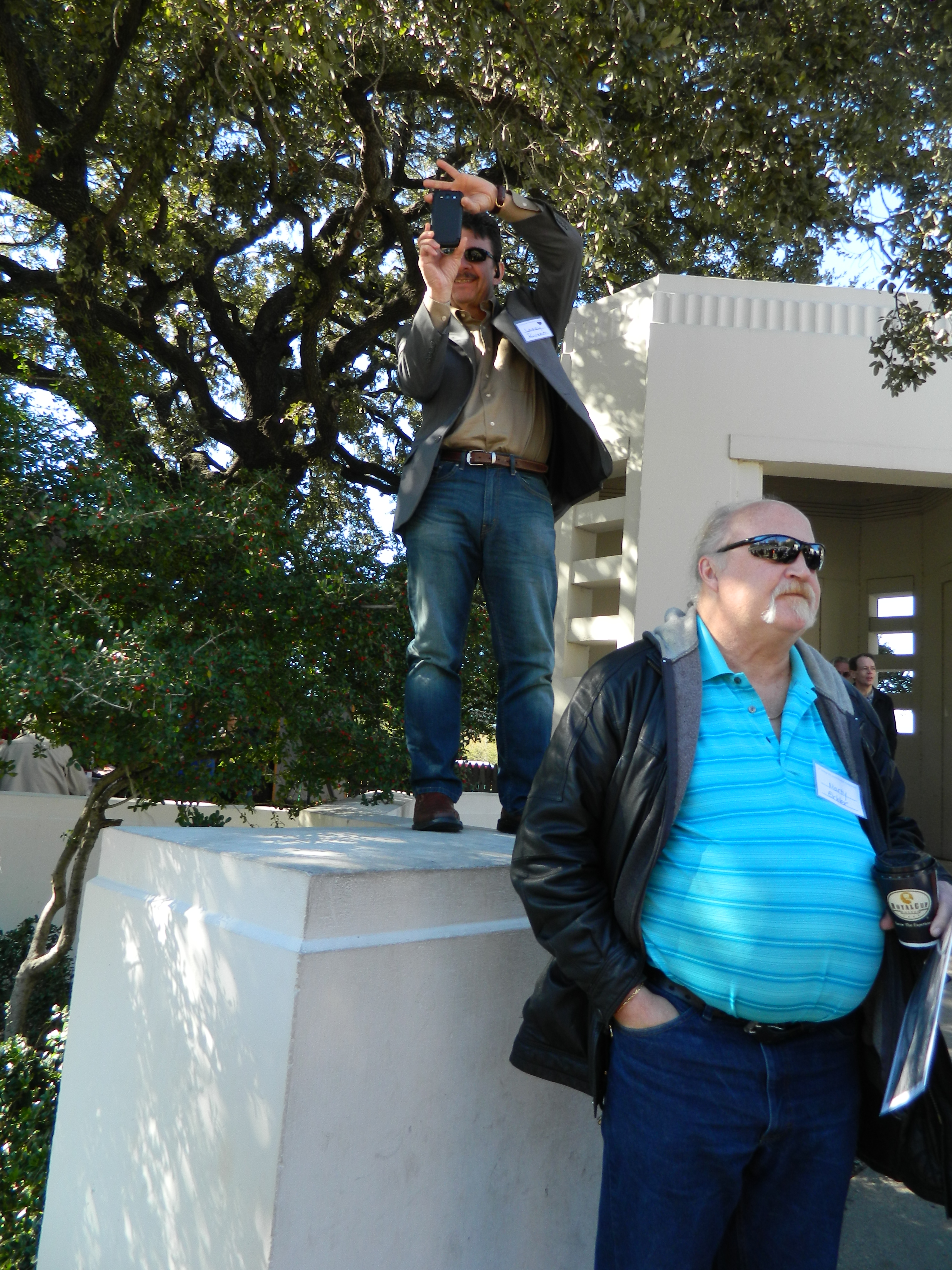 Richard, myself, and my dear Father Mercedes in Santa Barbara in November 2013 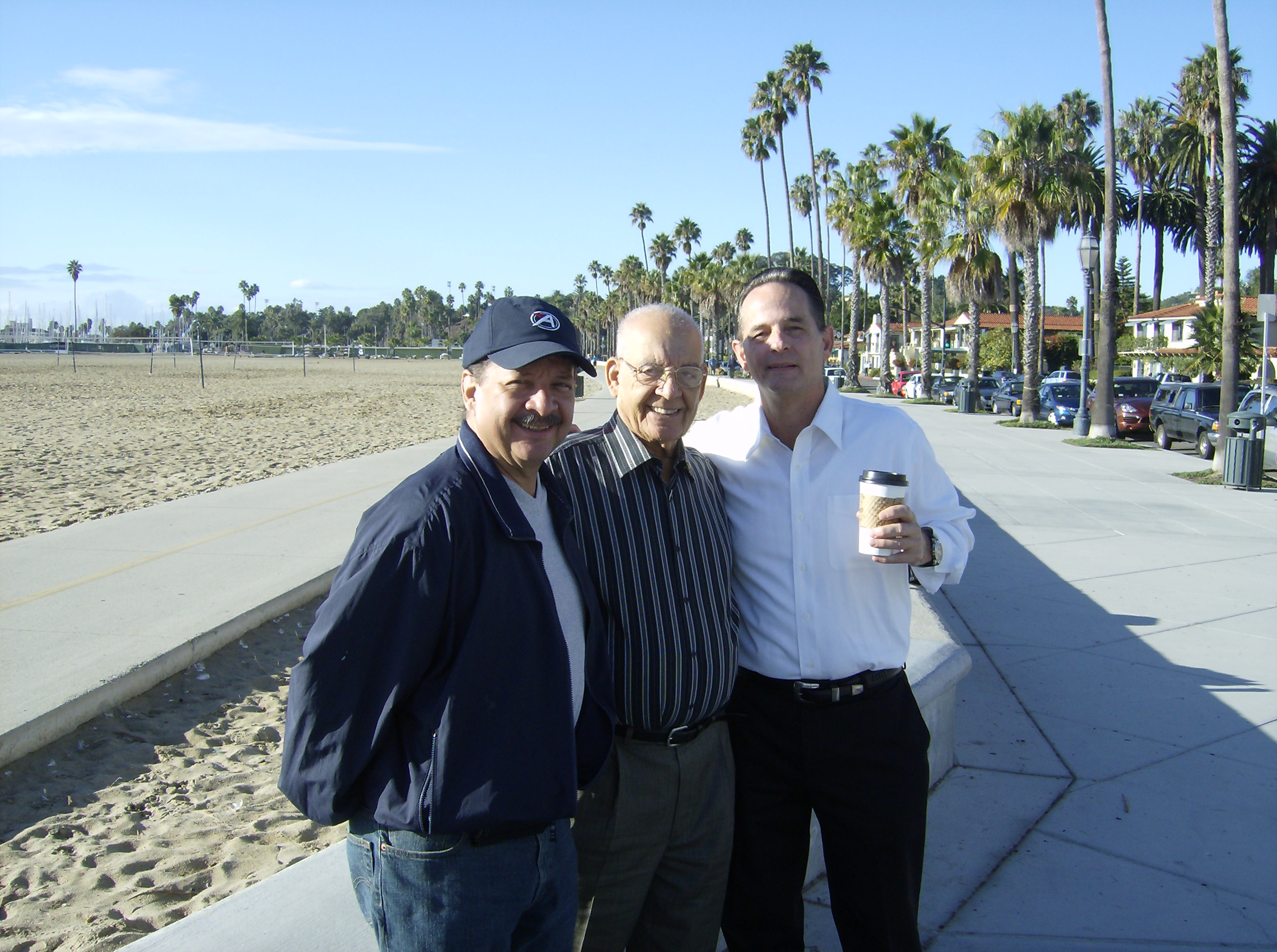 To My dear Friend and Brother Richard Hooke — until we meet again. 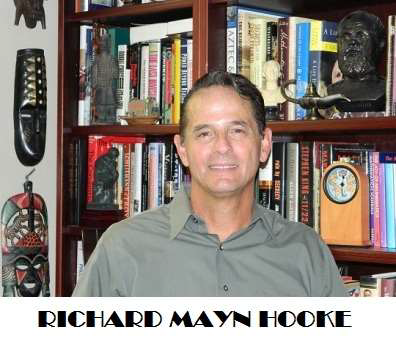