The great Roy Schaeffer gets credit for this one.

Some time ago, Roy pointed out evidence of Zapruder film alteration – not in the sequence on Elm Street, where so many researchers have found and pointed out obvious alterations, but much earlier – as early as Z frames 153-158.  Today, I wish to focus on these crucial frames, because they seem to have everything to do with LBJ’s car and the Secret Service follow up car, a yellow 1964 Ford Mercury 4-door sedan model 54A,  nicknamed “Varsity”, driven by one Joe Henry Rich. In a previous post, I reported that LBJ, knowing in advance what was to happen on Elm Street, was actually ducking during the assassination of JFK. The following is Todd Vaughan’s schematic representation of that car, identifying the make, year, and occupants, including their relative positions: 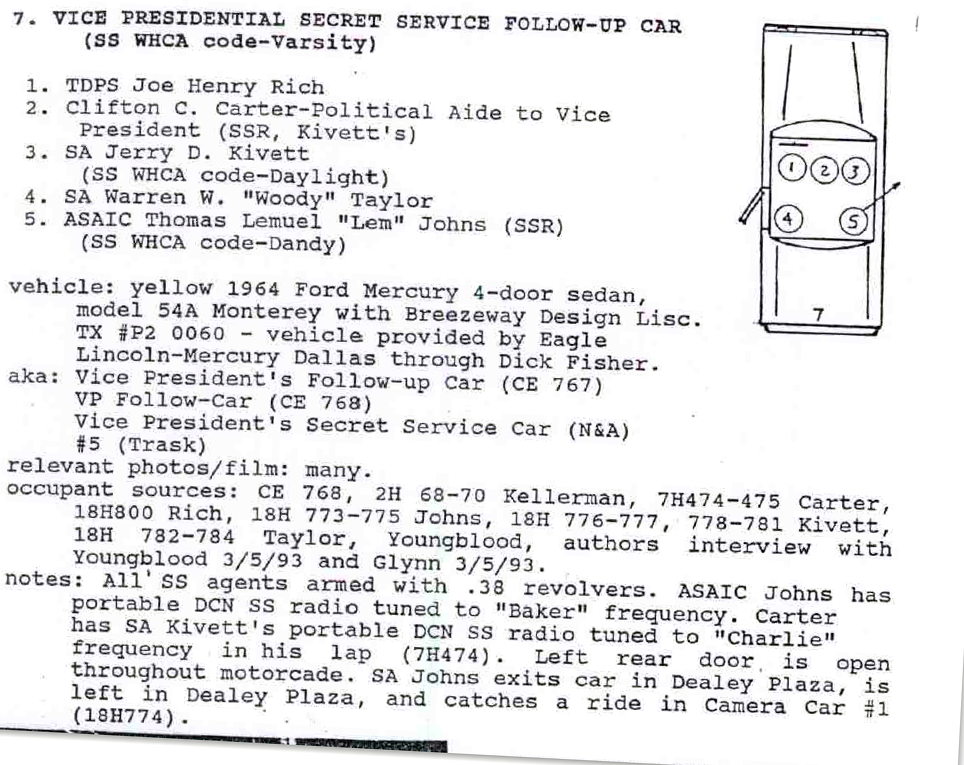 A detailed examination and isolation of frames Z153 through Z158 yields interesting results. The following frames are from John Costella’s Zapruder film compilation, which corrects aspect ratio issues, pin cushion distortion, and  other anomalies found in the extant Zapruder film.  Costella’s film is not subject to  copyright infringement, which is the reason why we can show it at will, as John has placed his work in the public domain.  Frame Z153 shows what appears to be a complete frame, as LBJ’s car initiates the turn onto Elm Street.  His Secret Service car follows close behind, and does not seem to be the object of any alteration: 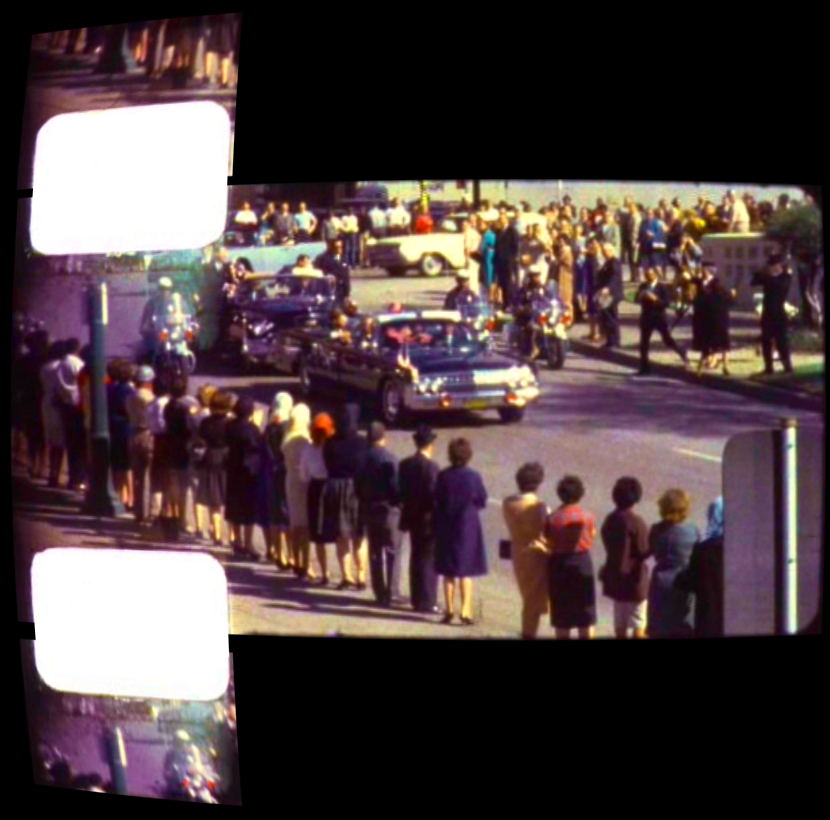 Frame 154 is next, and shows the same scene, but where more of “Varsity” can be seen as it emerges from the corner of Houston and Elm. On both of these frames, notice the sprocket holes and the images shown, appear to be intact: 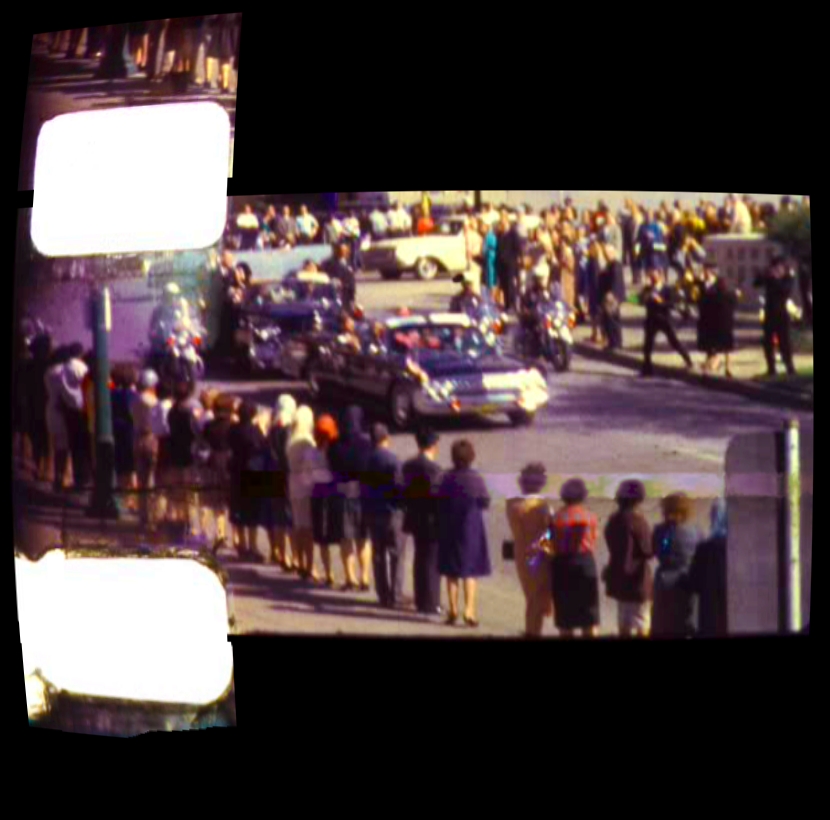 Then we encounter frame Z155: 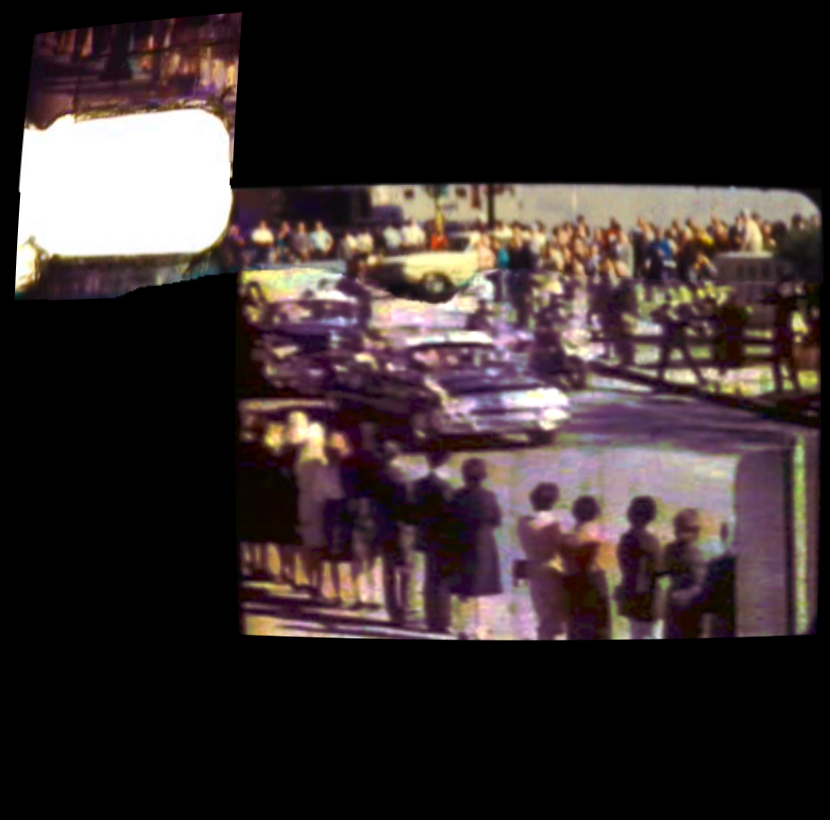 Not only has the image between the sprocket holes been erased, but a very distinct, wave shaped edit line now appears horizontally across the frame. A closeup of this frame reveals how LBJ’s car has been obliterated and distorted from the frame.  Note how the lower left portion of the frame has been deleted. This would have shown LBJ’s car, as we will see in frame Z157.  The dark area seen only in frame Z155, which is below the car, makes it appear to be suspended above the pavement and completely out of sync with the rest of the frame. 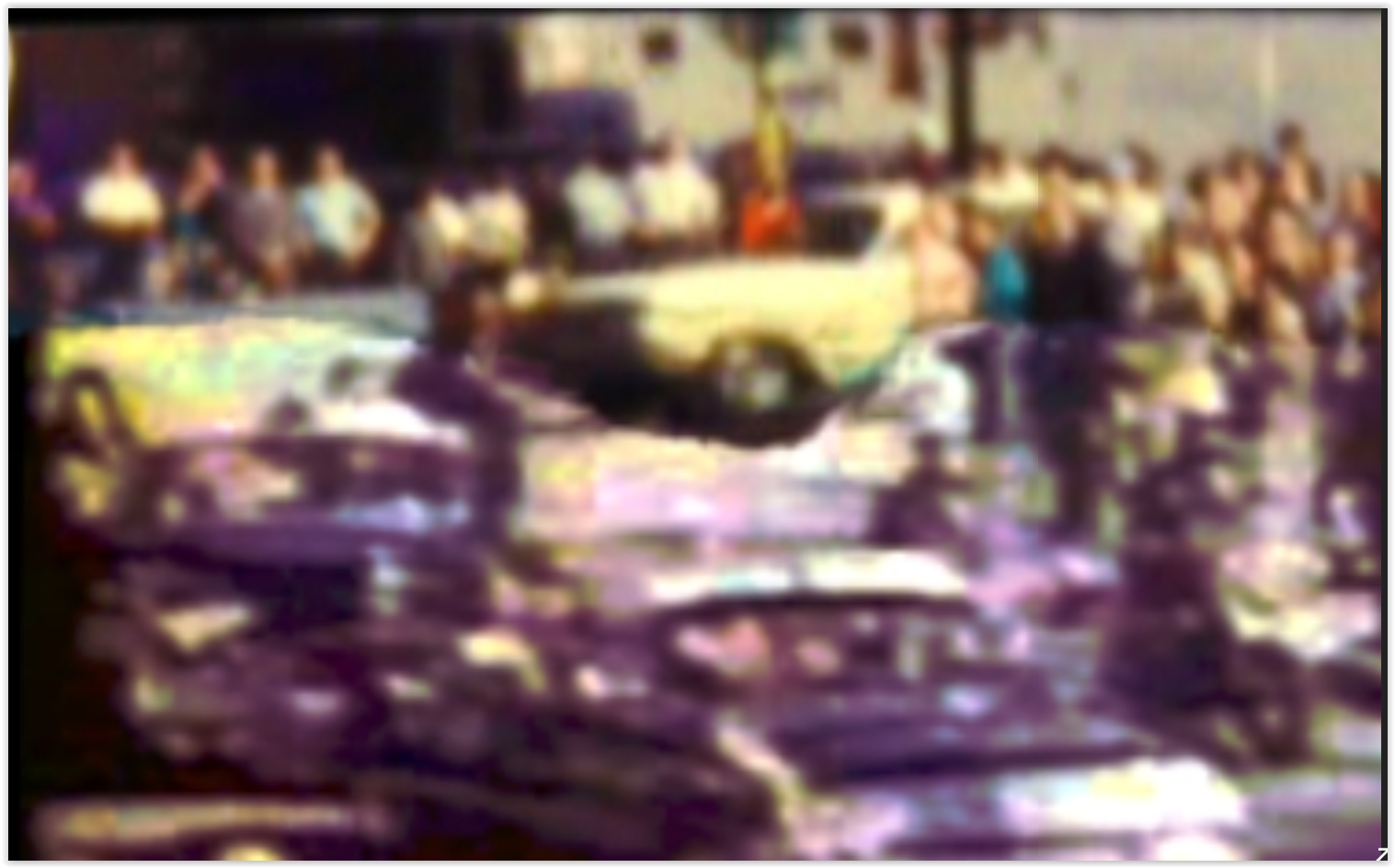 This is a super closeup of “Varsity” in suspended animation: 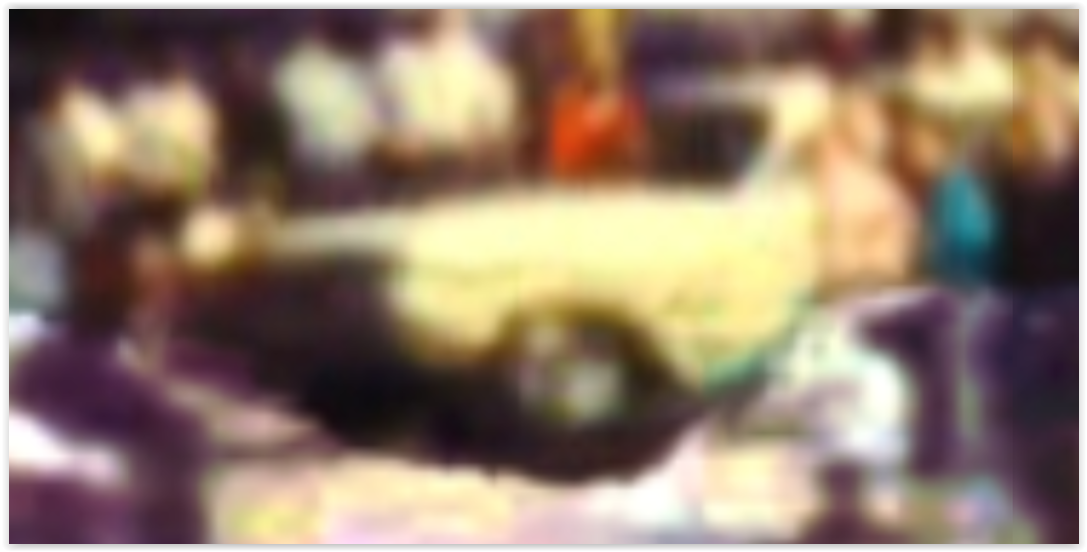 Frame Z156 shows “Varsity” has landed on the pavement again, and shows the complete removal of inter sprocket images, where conveniently LBJ’s car is only half visible: 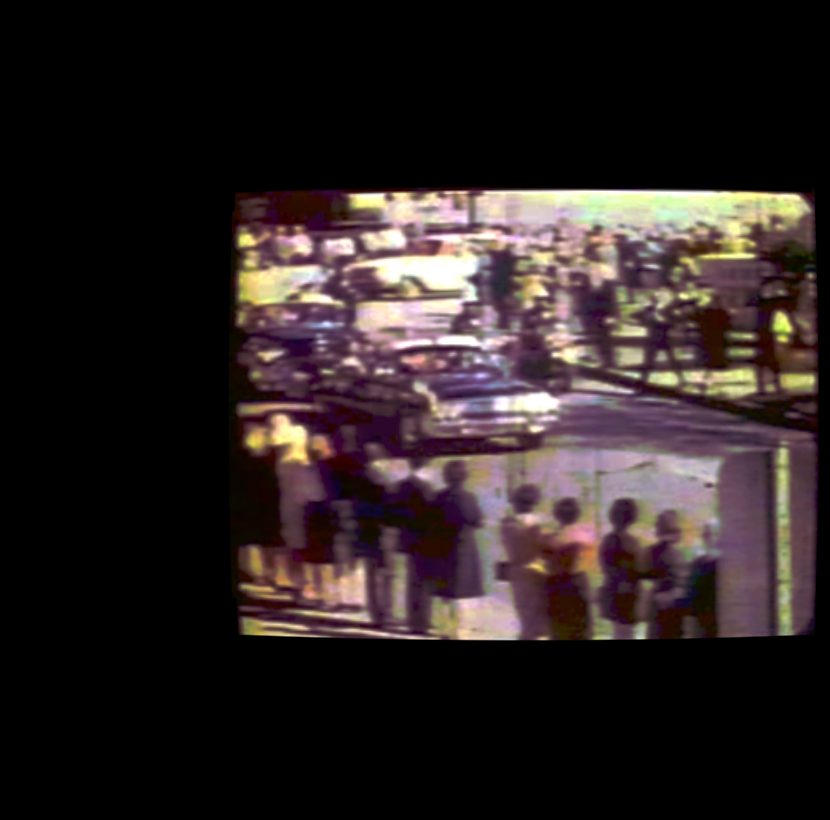 Frame Z157 shows the lower left portion of the frame is has been restored, but not the upper inter sprocket detail at left: 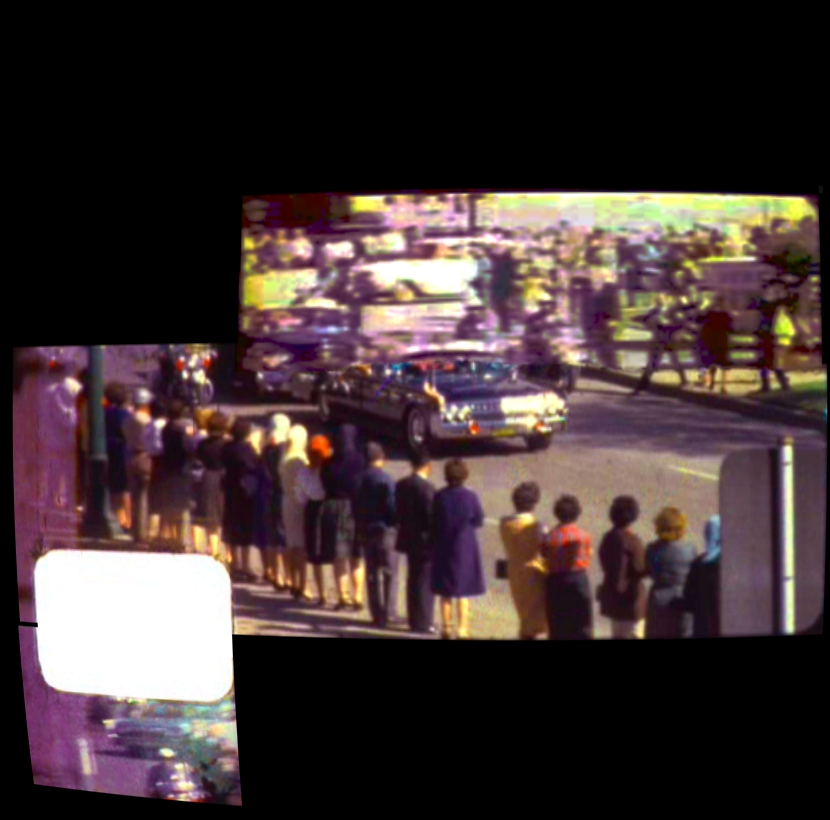 When we zoom into LBJ’s car, this is what we see. An empty void where Johnson should be: 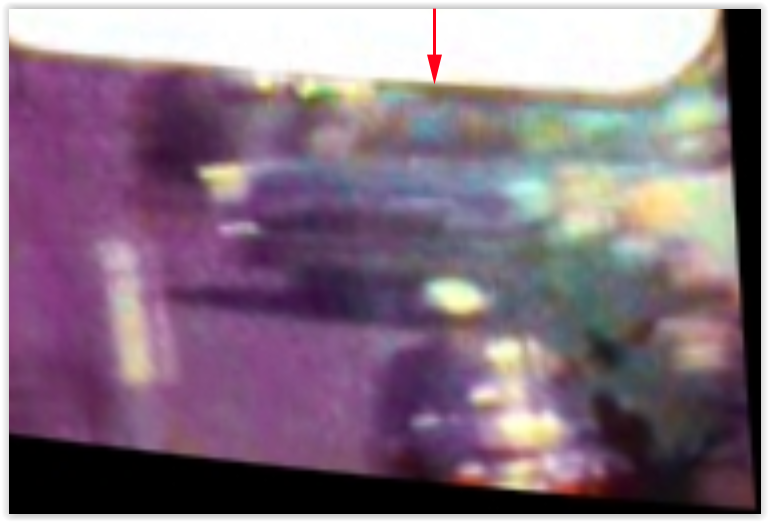 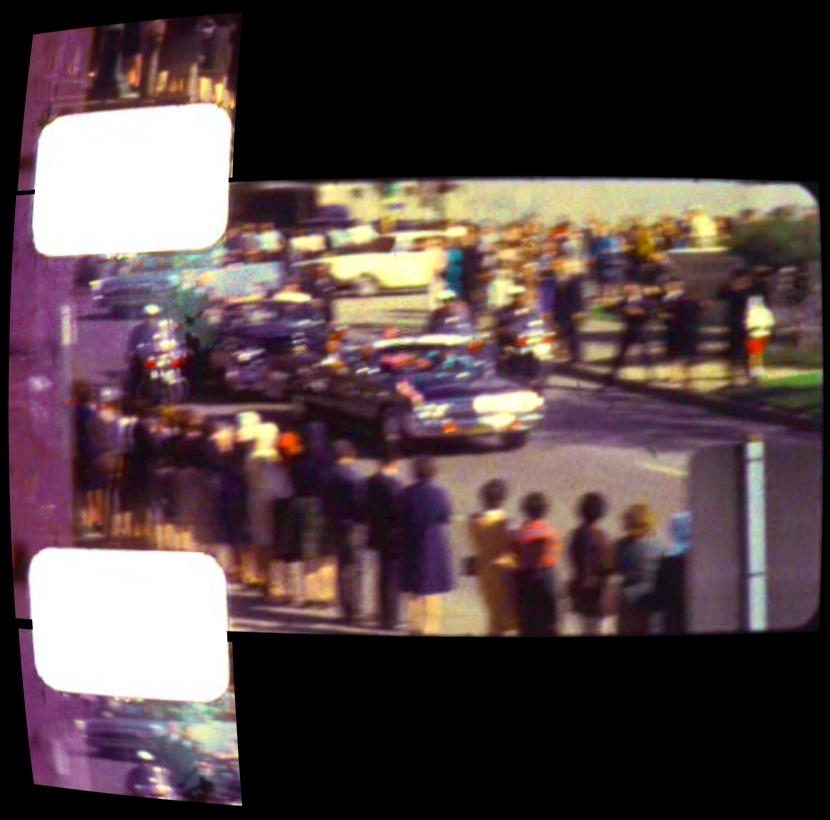 To recapitulate, here is a short animated gif, showing how the frames interact with one another, and how the inter sprocket areas change in an irregular manner .  The gif  stops momentarily at Z155 :

Image expert Dennis Cimino has come up with this study, where he has zoomed into the Altgens6 photograph,  which shows definite obliteration of the heads of the SS agents in the follow up car:

What does this all mean?

Both events cannot be coincidental. The alteration of an individual frame, Z155, with obvious manipulation of adjacent frames before and after, are highly indicative that something very fishy is going on here.  Again, I wish to thank Roy for pointing me in the right direction.