One of the most controversial issues discussed on Internet forums is whether or not LBJ ducked during the JFK assassination, as he was riding only one car behind JFK’s SX-100 limousine.  Rufus Youngblood earned a medal for supposedly jumping over his seat and heroically covering LBJ with his own body to protect the vice president.   Unfortunately, not a single witness saw this happen.  Congressman Ralph Yarborough, who was riding in the same car,  went on record to emphatically refute Youngblood.  He told Jim Marrs (pgs 249-250 Crossfire):

“It just didn’t….It was a small car, Johnson was a big man, tall. His knees were up against his chin as it was.  There was no room for that to happen”

“Yarborough recalled that  both Johnson and Youngblood ducked down as the shooting began and that Youngblood never left the front seat. Yarborough said that Younglood held a small walkie talkie over the back seat of the car’s seat and that he and Johnson both put their ears to the device.  He added: ‘They had it turned down real low.  I couldn’t hear what they were listening to.’ “(page 250, Crossfire)

This is how Beverly Brunson dealt with Youngblood’s heroics:

Here’s an isolation of LBJ’s car, as seen in the Altgens6.  Right away, we notice masking over the individual’s face. 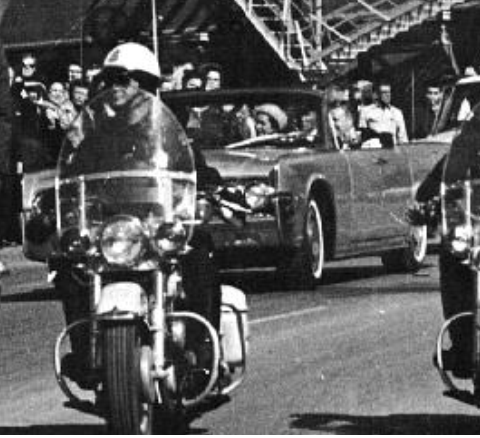 Some Internet devotees cite this image as proof that LBJ did not duck, that he is “clearly” visible in the Altgens6: 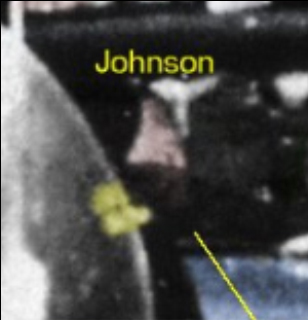 A few years ago, I created these collages, and considered the matter closed: 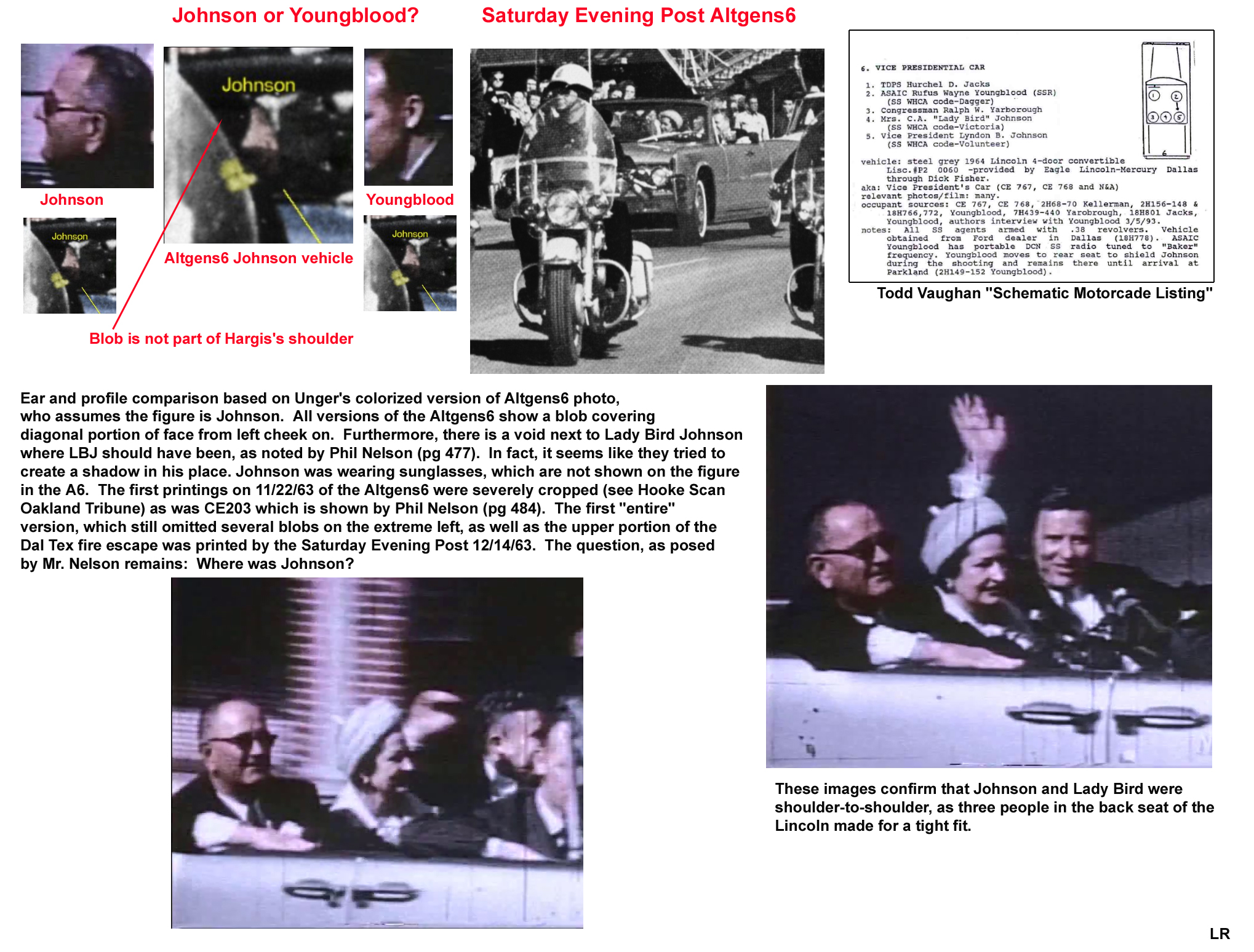 And this one which tracked LBJ in the Zapruder film, as his Lincoln was still on Houston Street. 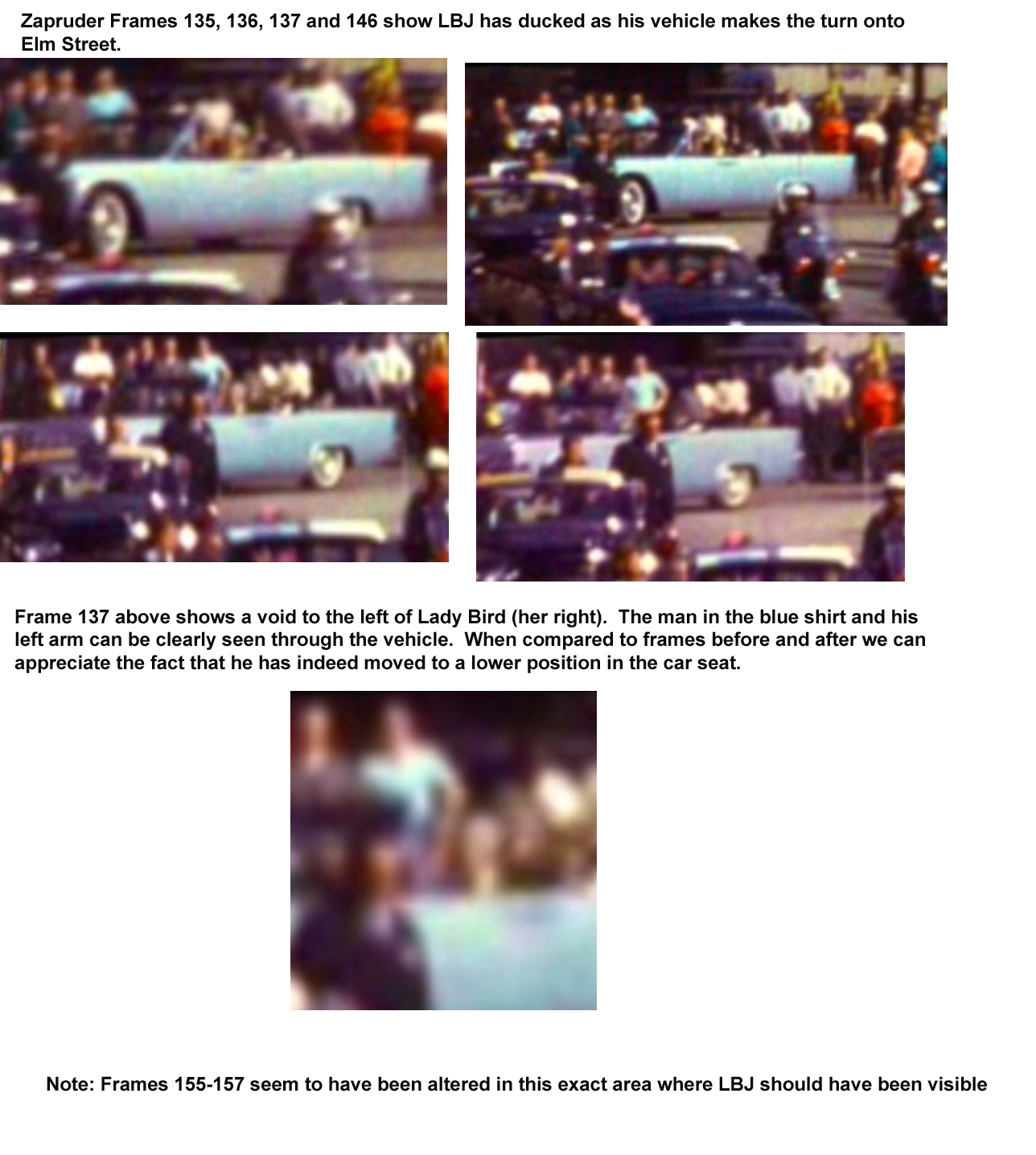 A blowup of frame Z142 shows Lady Bird and Yarborough, but  a void where LBJ should be seen.  Notice how the man in the light blue short-sleeved shirt, who is behind the LBJ Lincoln,  can be seen from the thighs up, including his left arm at his side.

So can Blender help us prove or disprove the “heroic actions” of Youngblood?  Let’s take a look.  Here is a closeup of LBJ’s car, as seen in our Altgens6 Blender rendering: 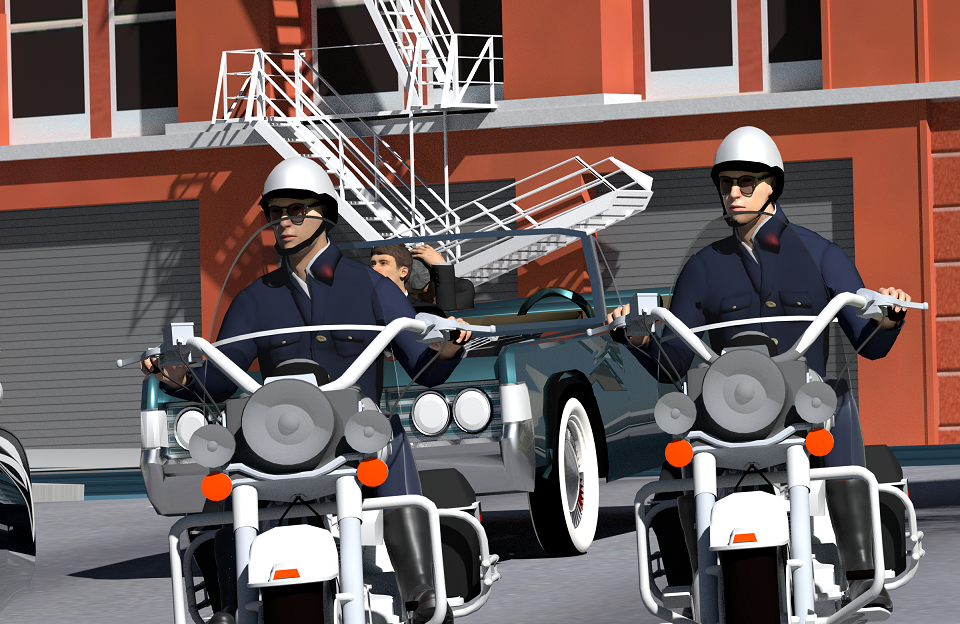 Note that the person seen off of Hargis’s left shoulder is clearly visible with nothing obscuring his upper face. This area is partially opaqued in the Altgens6.  An overhead view of the car reveals the  following: 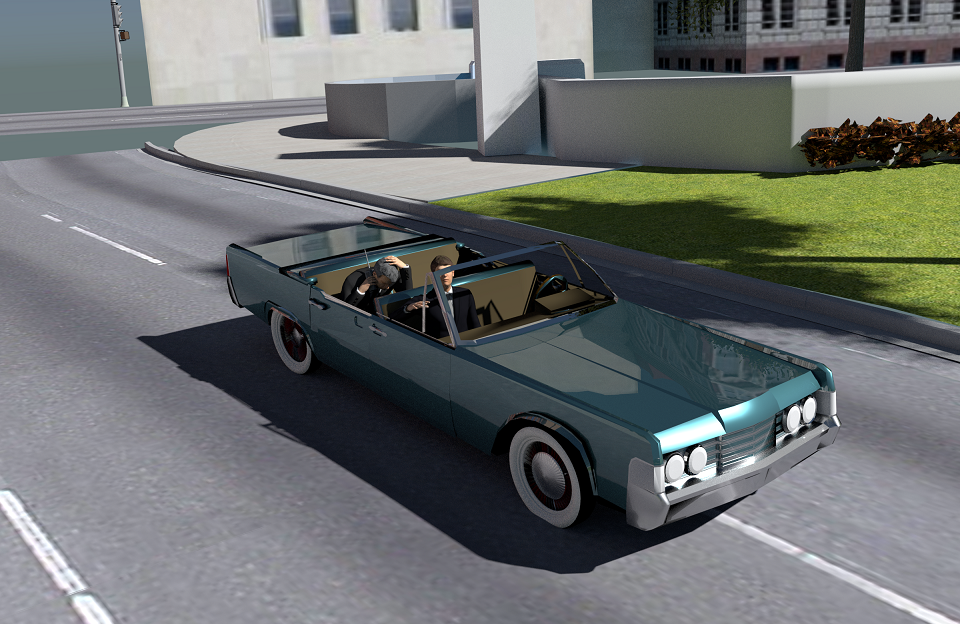 As we examine this 3D rendering, we begin to realize that Yarborough was right – there is little to no space to accomodate Youngblood’s “heroic actions”!

This “less” cropped version of the Altgens6 published on 12/14/63 in The Saturday Evening Post shows a lot more of the photograph’s left side.  A woman is seen pointing some kind of camera in the direction of the motorcade.  According to witness maps of Dealey Plaza, that position was occupied by either Maggie Brown or Ann Donaldson, both of them worked for the Dallas Morning News.  As we examine this area, we note how those who altered the Altgens6, completely airbrushed the camera that the Dallas Morning News women were using to film the motorcade.  In fact, there is an even larger blob covering another woman who is taking pictures or filming next to them and to their right. (and some still insist this photograph has not been altered!):  What could they have been filming? 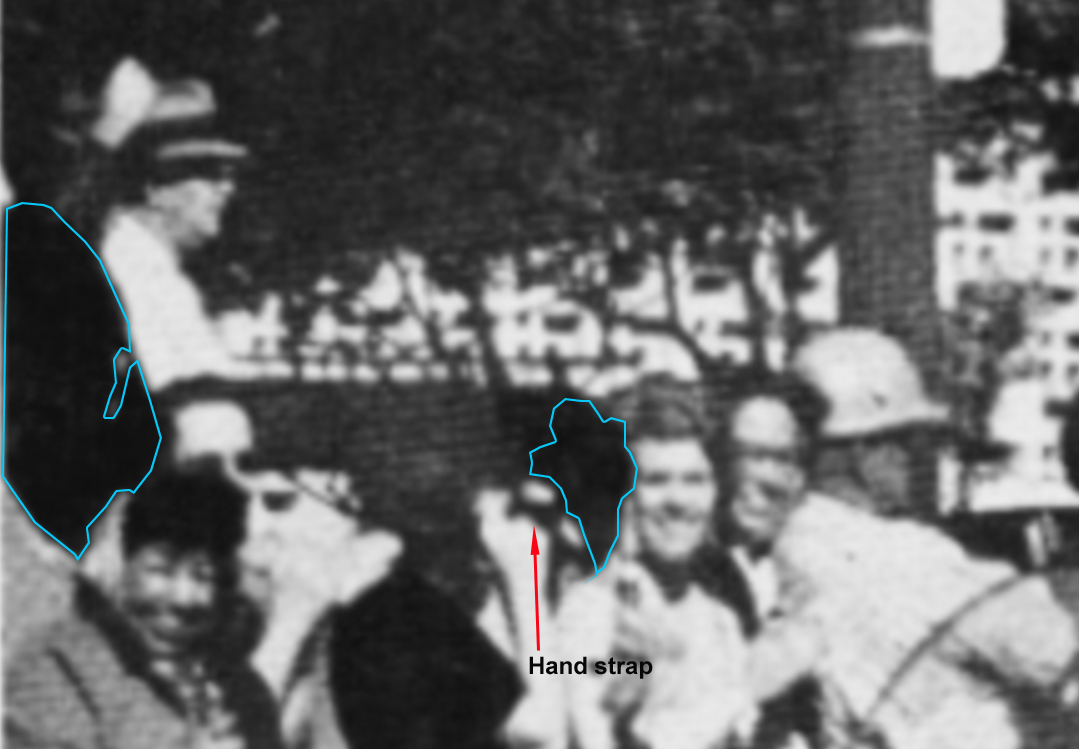 Here is where they are located in the Zapruder film: 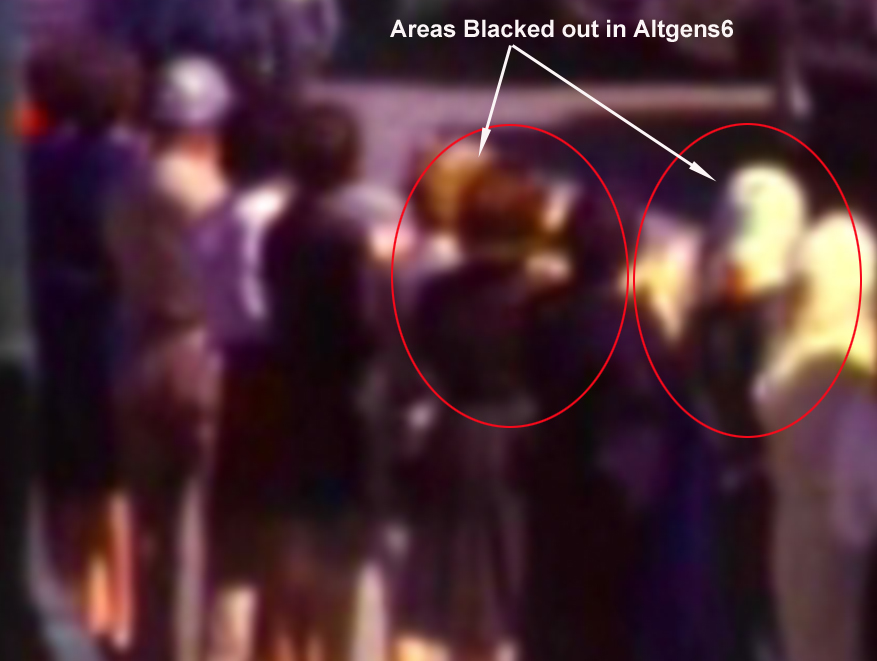 In our Blender scene, this is the perspective from that position on the north curb of Elm Street: 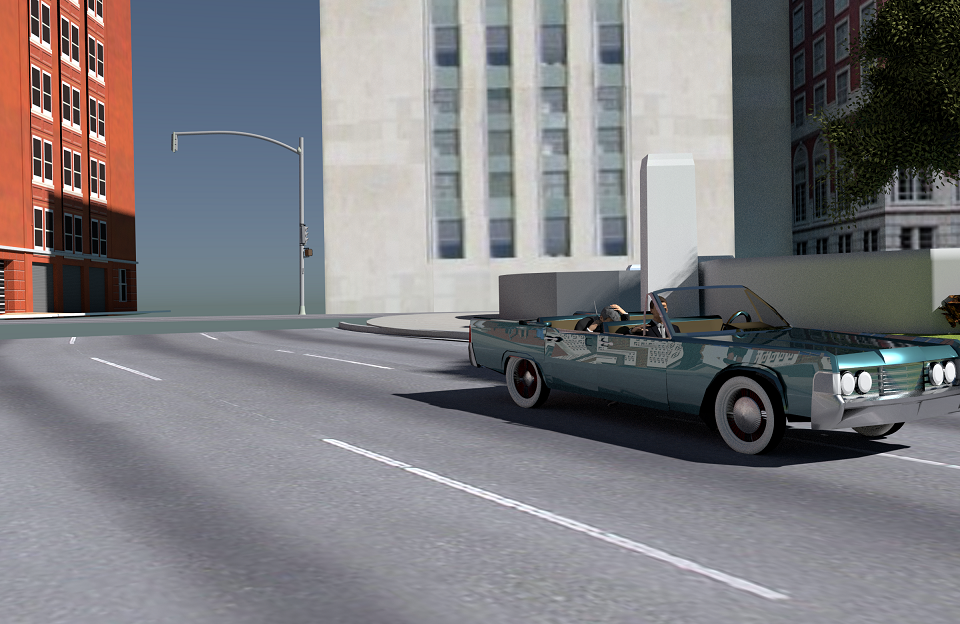 And here is the line of sight from the front passenger seat of LBJ’s car: 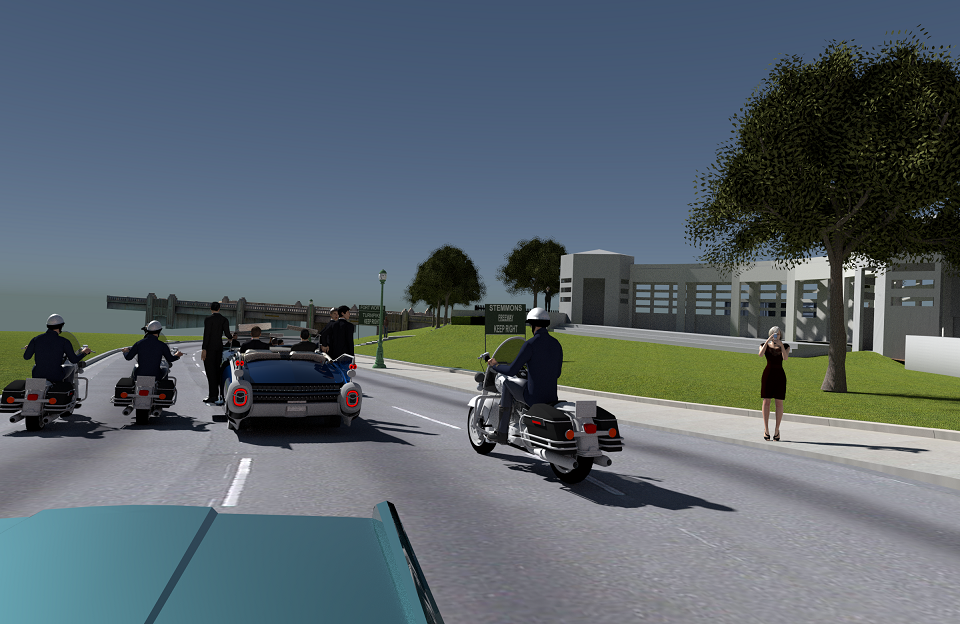 That’s right.  The woman filming had LBJ’s car right in her camera’s viewfinder.  Here is a side view: 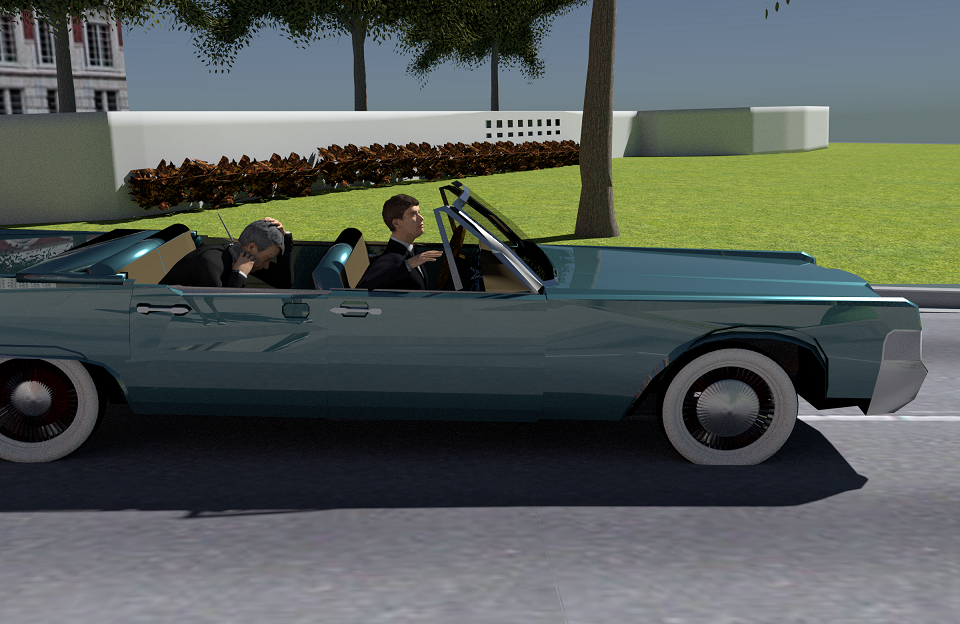 All of this would certainly suggest that LBJ, and perhaps Youngblood, had foreknowledge of what was about to happen on Elm Street.  Hey! And what ever happened to Maggie’s film…..?