On 7/9/17, the History Channel premiered the Amelia Earhart documentary – Amelia Earhart: The Lost Evidence.  Former Executive Assistant FBI Director Shawn Henry stars in this transpacific adventure, as he goes on location to the Marshall Islands in search of evidence that will help corroborate the authenticity of an old photograph found by happenstance by retired U.S. Treasury agent Les Kinney, in which classified ONI  (Officed of Naval Intelligence) documents appear to have been misfiled by the National Archives. 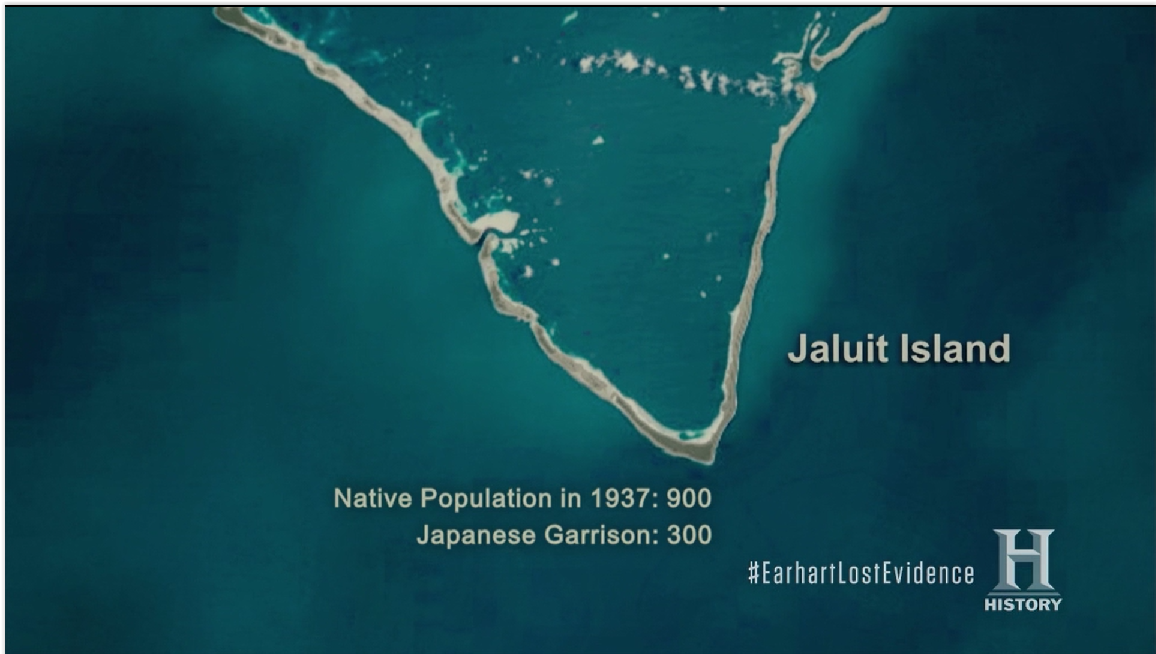 This photo went viral throughout the Internet: 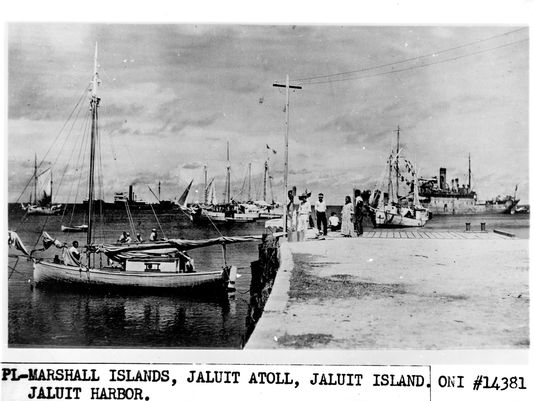 According to Former Executive Assistant FBI Director Shawn Henry, “This could be the biggest government cover-up of all time” 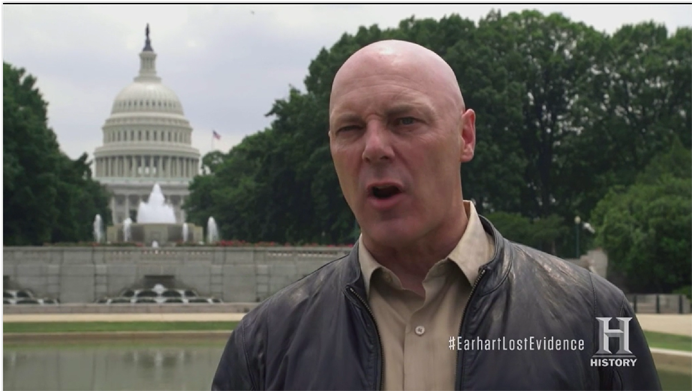 [Author’s note: Really Shawn??? Have you ever heard of how the National Security State (i.e. the government) covered up the assassination of John Kennedy and framed Lee Oswald in the process? A cover up which continues to this very day? (Perhaps Mr. Henry would like to take up that investigation next).]

Henry’s very first order of business consisted in establishing the provenance and authenticity of the photograph in order to eliminate the possibility of it being the result of a hoax or artificial composition. 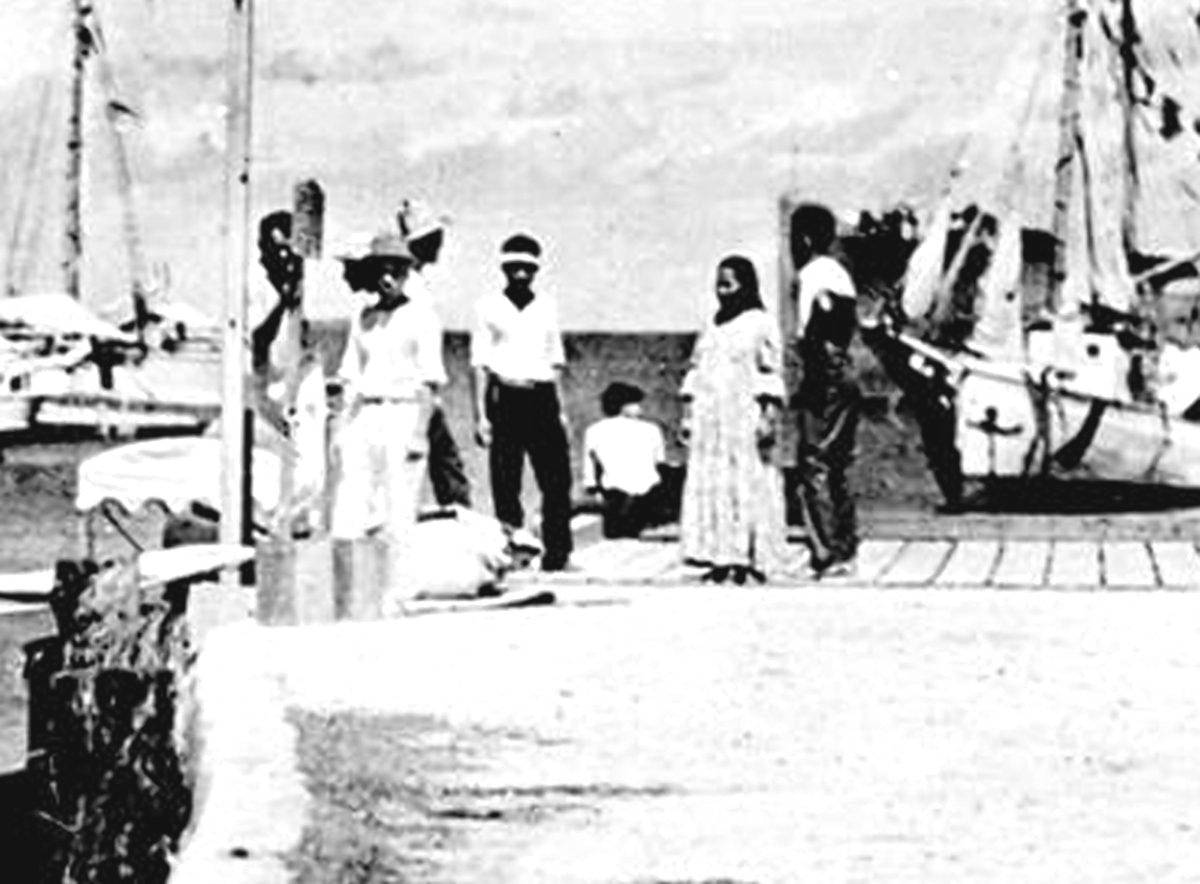 Authenticity of the photograph

After obtaining the photograph from Kinney, Henry visited photographic expert Doug Carner to confirm its authenticity. 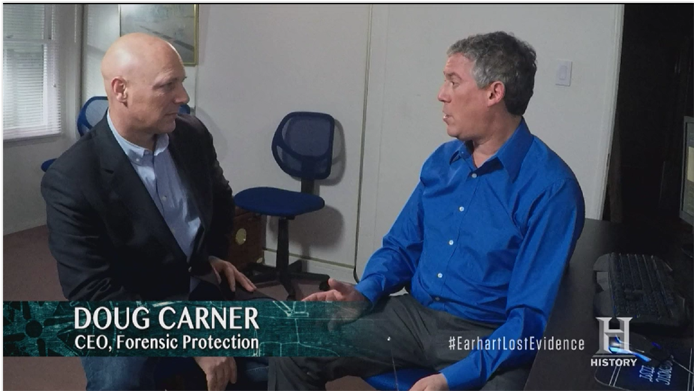 Using a combination of computer analysis and special imaging software which he helped develop, Carner was able to put the photograph through five different tests, which according to  him, confirmed the absolute authenticity thereof. These were: Error Level Analysis, Noise Level Analysis, Principal Component Analysis, Gradient Analysis, and Minimum/Maximum Analysis. The fact that all of these tests showed no significant deviation that would suggest tampering, seemed to validate its authenticity. 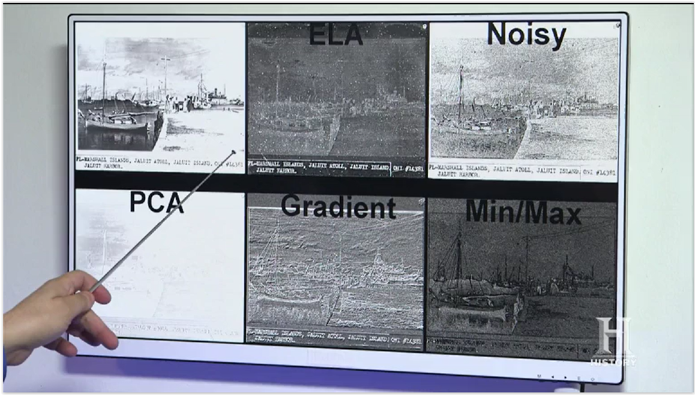 Next, Henry went to see facial recognition expert Kent Gibson, who also put the photograph through a series of tests which will now be discussed. 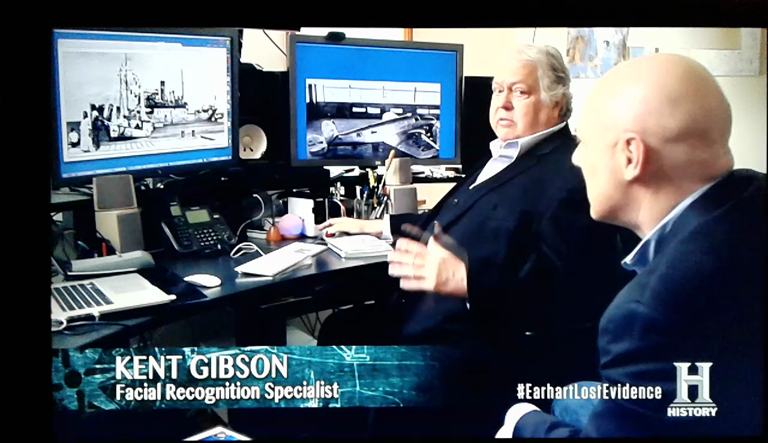 During the program, we are shown via proportional comparisons by Kent Gibson, images which appear to confirm that the person in question seems to have had the same physical characteristics as Earhart: 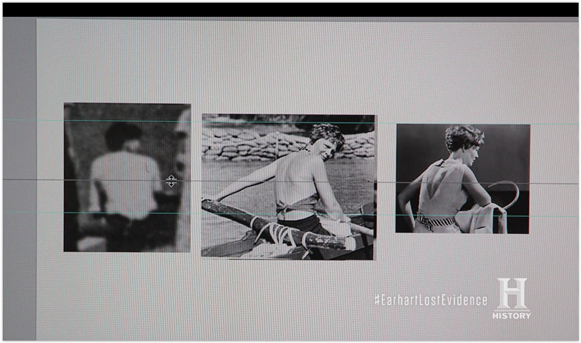 However, the importance of Gibson’s work resides not on Earhart, but on her navigator, Fred Noonan, where Gibson seems to have identified Noonan by the use of forensic facial recognition overlay techniques – exactly the same techniques we have used to identify Lee Oswald as the man in the doorway.

Let’s take a look. Gibson begins by presenting this photograph of Noonan and Earhart.  Amazingly enough, the perspective of Noonan’s head is a little more than ¾ , almost the same as Doorman! : 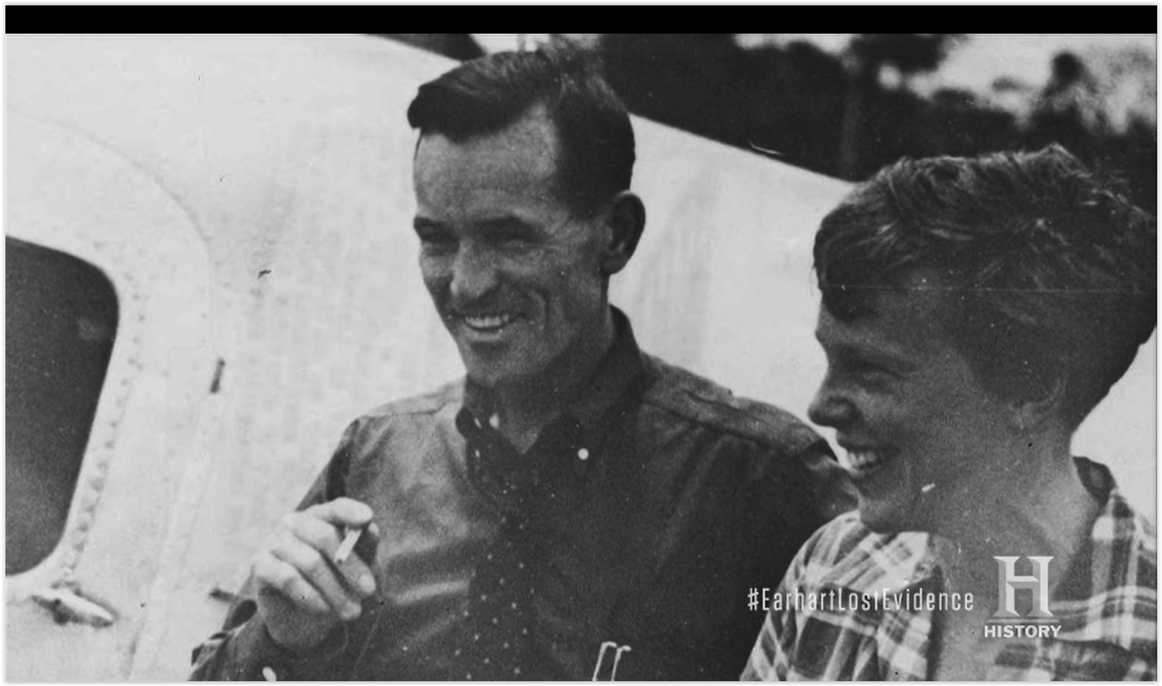 Gibson’s control or Probe image is this one: 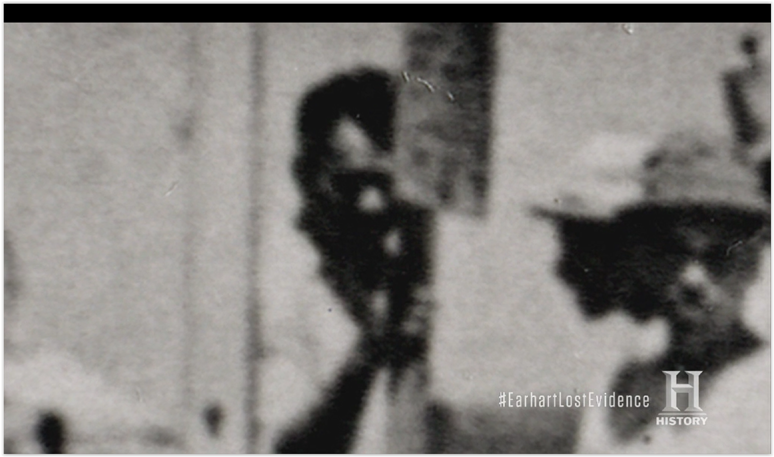 …which we have enlarged: 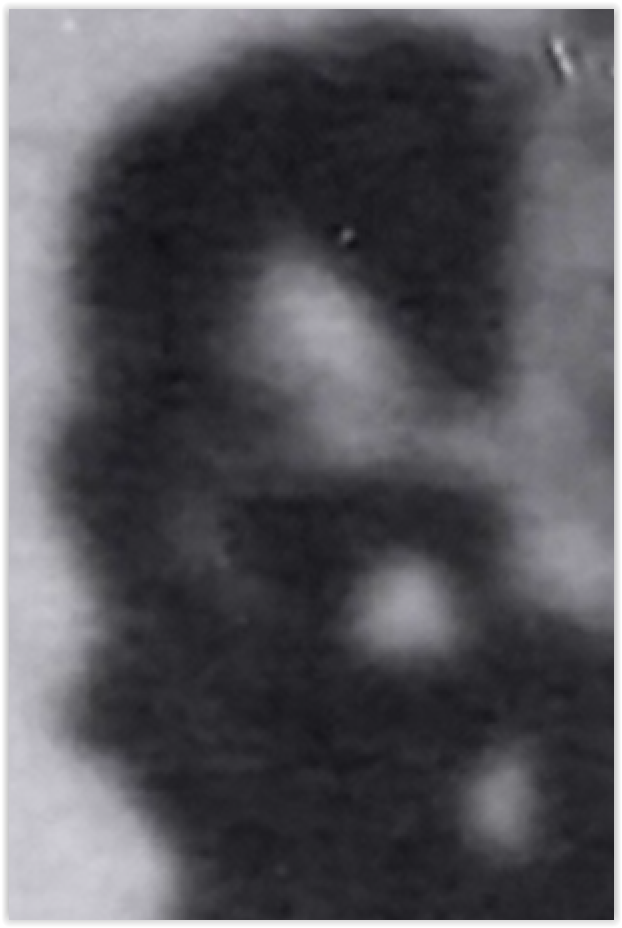 One small caveat – Gibson could not find a photograph with the correct orientation or perspective for testing. The one he found offered the opposite orientation, so in order to use it, it was necessary to flip the image to attain the proper angle: 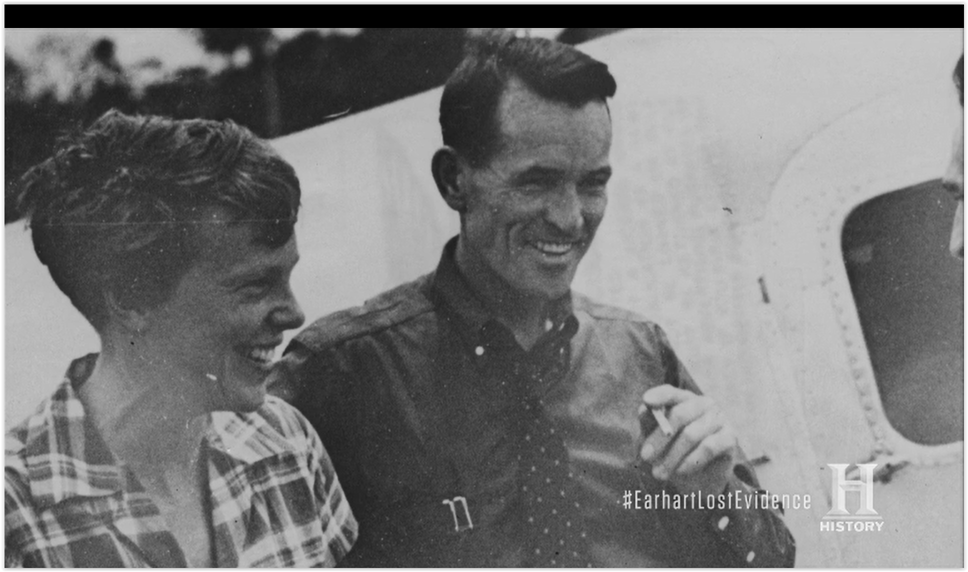 Now that he had the gallery image, and in order to calibrate  methods and validate findings, Gibson needed to first establish the symmetry of Noonan’s face and cranium: 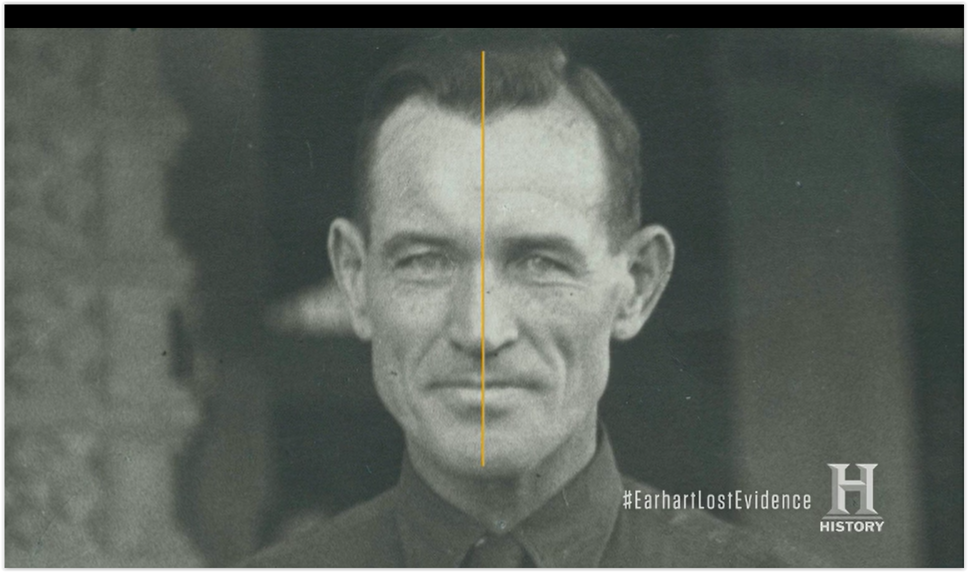 With this test, Gibson proclaimed Noonan a suitable subject, allowing him to use a flipped image for his experimentation. One small deviation by Gibson consists in the fact that he superimposed the probe onto the test, or gallery image, when the norm actually is to do the opposite. Regardless, by manipulating the opacity of the probe image, he was able to scale, tilt and move the overlay, until the main features lined up. In this case the receding hairline, the nose, the brow line, the right temple, and the ear were primary identifiers which seemed to match. The overall contour of the head seemed to match as well.

And here are Gibson’s results: 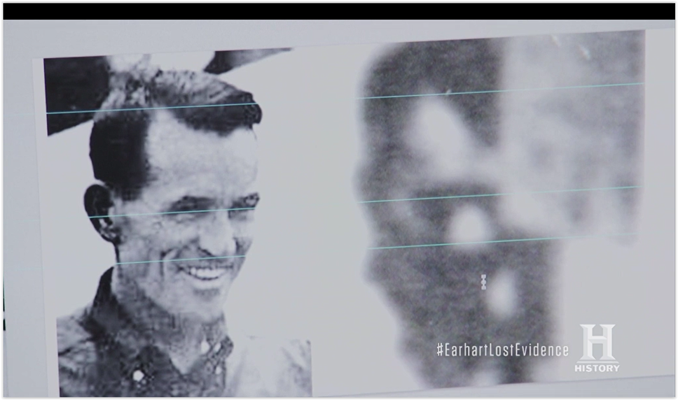 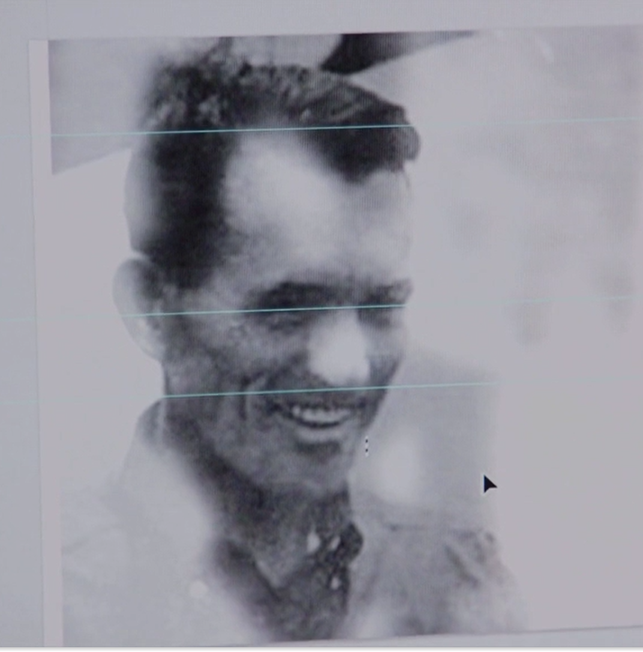 Are you kidding me?! That’s Fred Noonan!  Shawn Henry exclaimed when he was shown this overlay result.

We agree, the features do seem to line up. Here is our analysis using a tinted overlay: 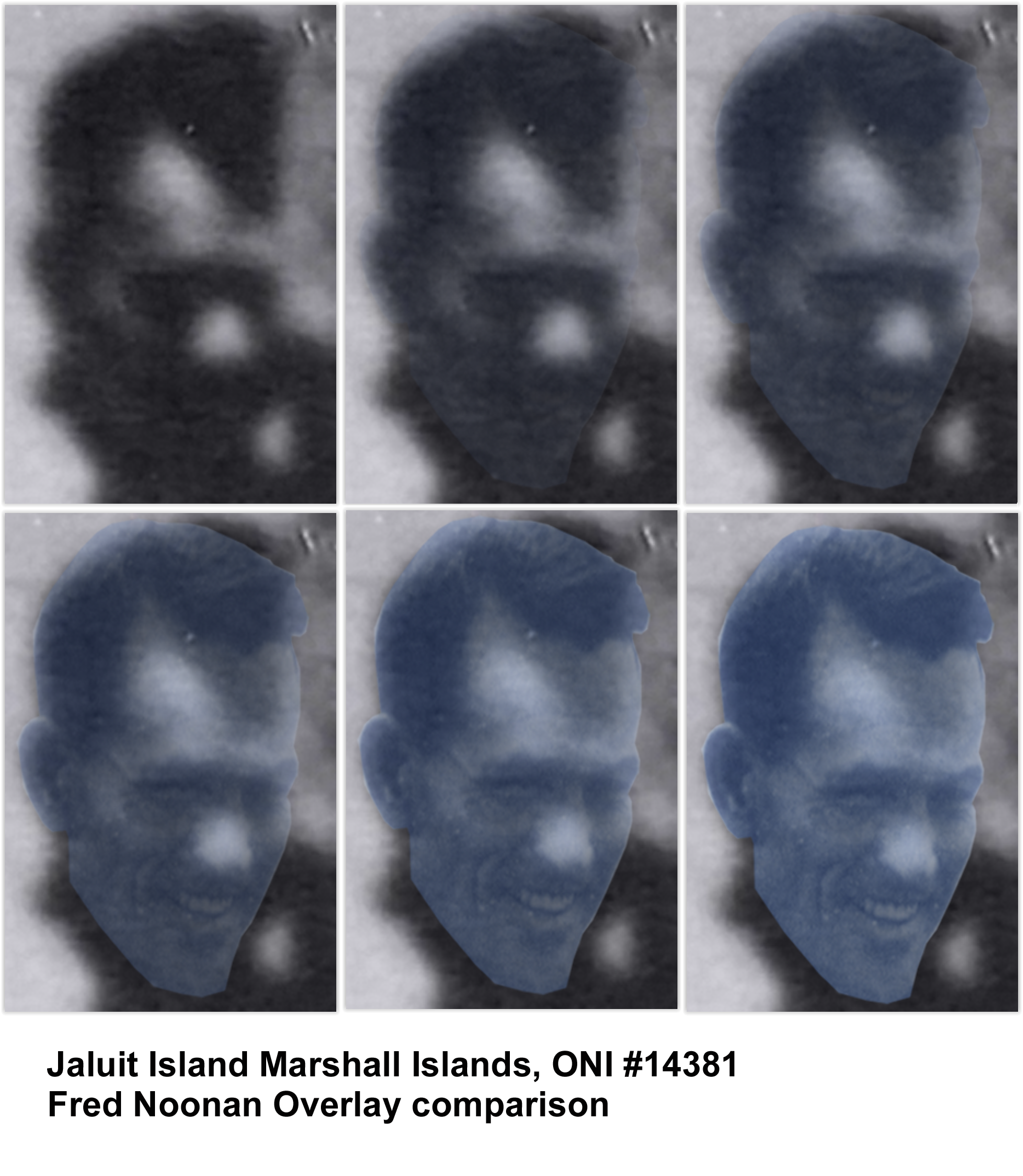 We do not think the mouth should be used as an identifier because that area is in shadows and the probe image does not seem to be smiling, much less showing any teeth. Perioral creases (laugh lines) are not visible on our probe, either. Despite this limitation, there are enough identifiers to allow us to support the conclusions of Gibson and a positive identification of Fred Noonan. Why is this finding so important? Because Gibson’s methodology closely follows the author’s (we published in 2015, also presented in Dallas 11/16) down to the almost exact perspectives of the subjects and the symmetry tests. It lends credence to the fact that the methodology is sound, from which reliable results can be obtained, and most importantly, replicated. 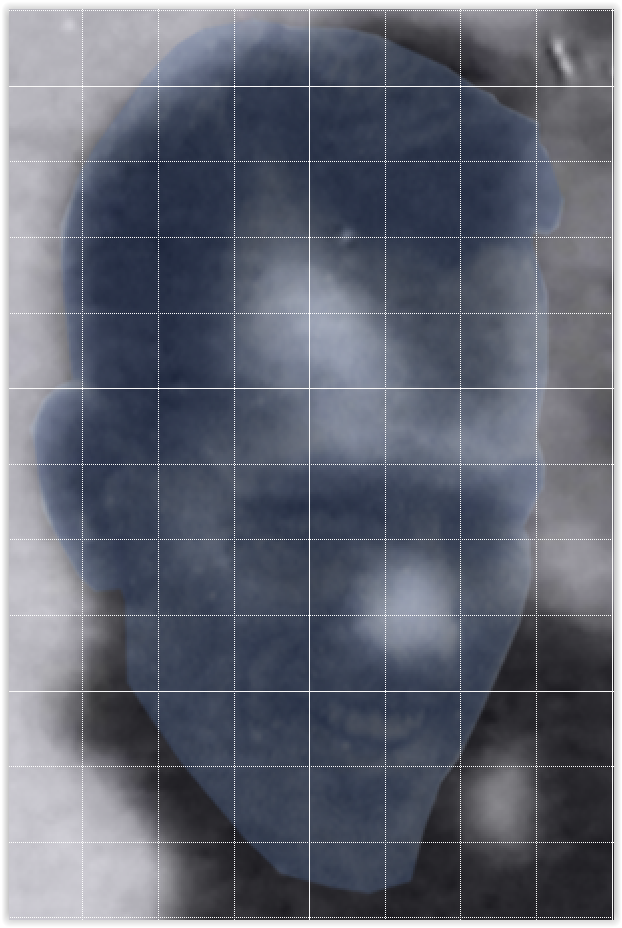 As a matter of comparison, here is our Lee Oswald collage, showing increasing levels of opacity as the overlay goes from 0% to 50%. The difference between the two is that our Lee Oswald overlay collage covers more identifiable areas than the Noonan overlay: 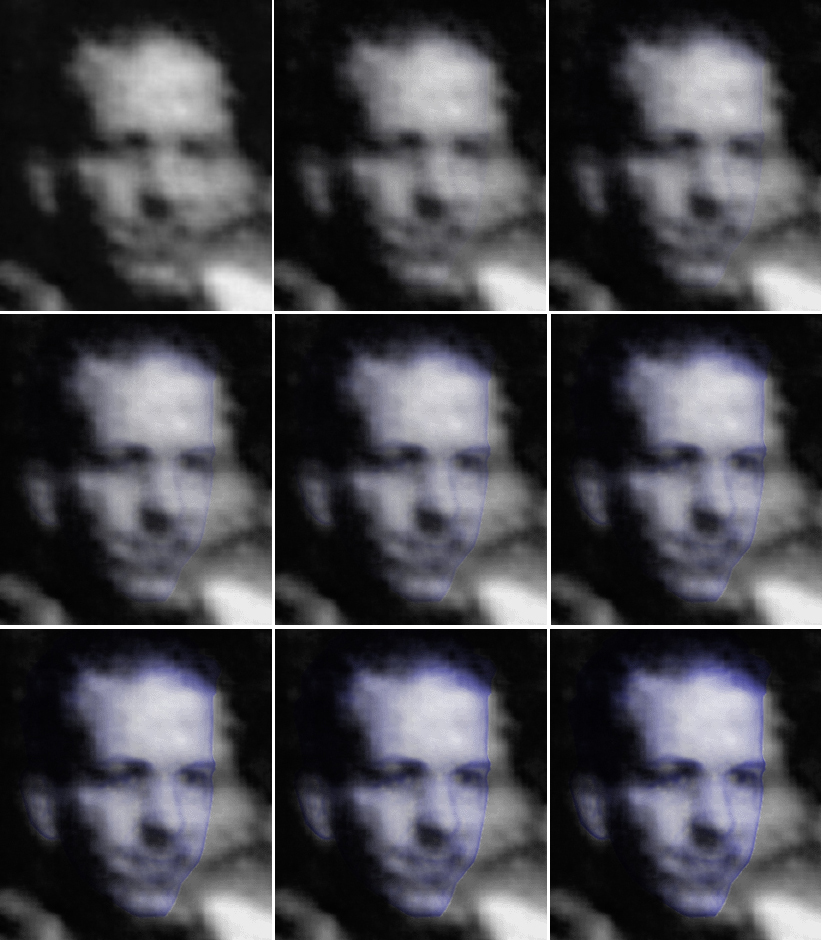 The question that begs to be answered is: Why have the so-called experts not worked on the man in the doorway issue? Could it be possible that doing so would jeopardize their careers, since many of them do contract work for the FBI, Secret Service, Homeland Security, etc? We will leave that up to the reader to make up his/her own mind.