In January 2015 Jim Fetzer and I published new information on Zapruder Frame 343, where I discovered the magnitude of the blowout in the back of the head of JFK, shown here  in shocking detail.  This, of course, complemented Jim’s discovery of the same blowout in frame 374, with the difference being that this one was much closer to Zapruder’s camera.  The image was obtained from a video called The Murder of JFK – A Revisionist History.  Here is an excerpt: 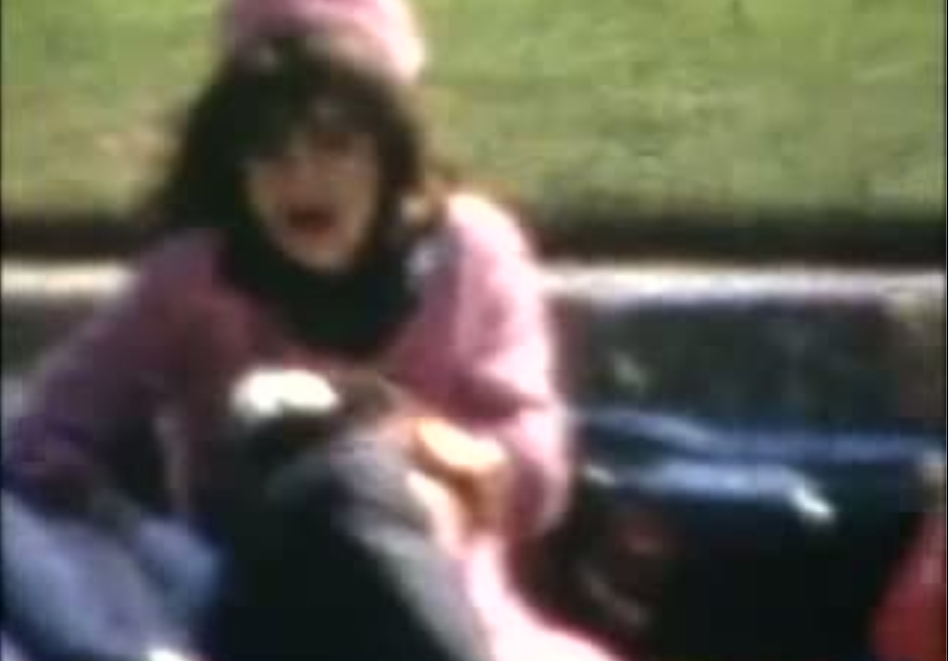 At that time I manually outlined the defect: 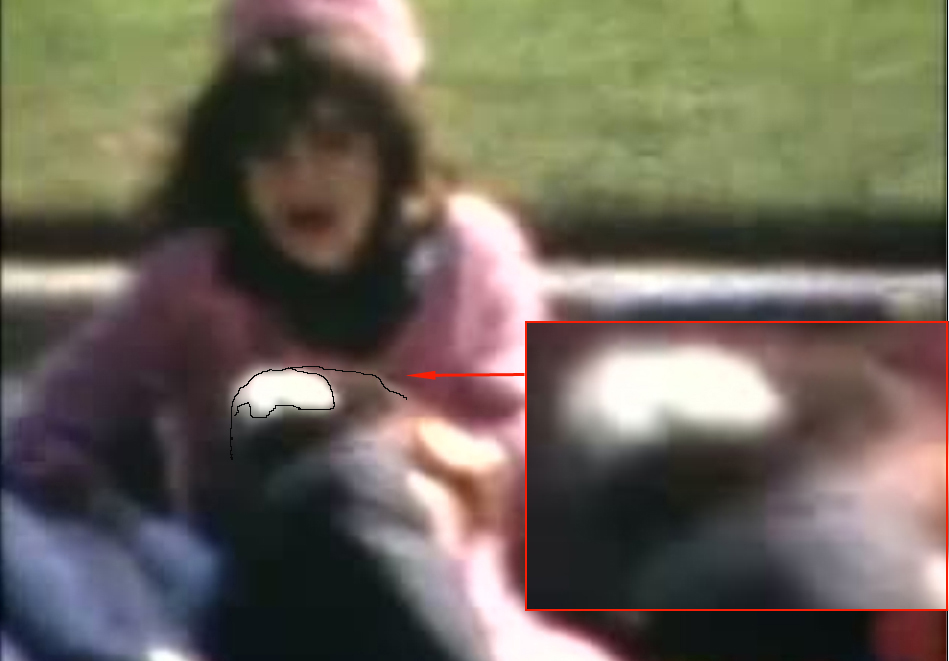 Photoshop has various filters which we can use to enhance and study images.  This one is called the “emboss” filter: 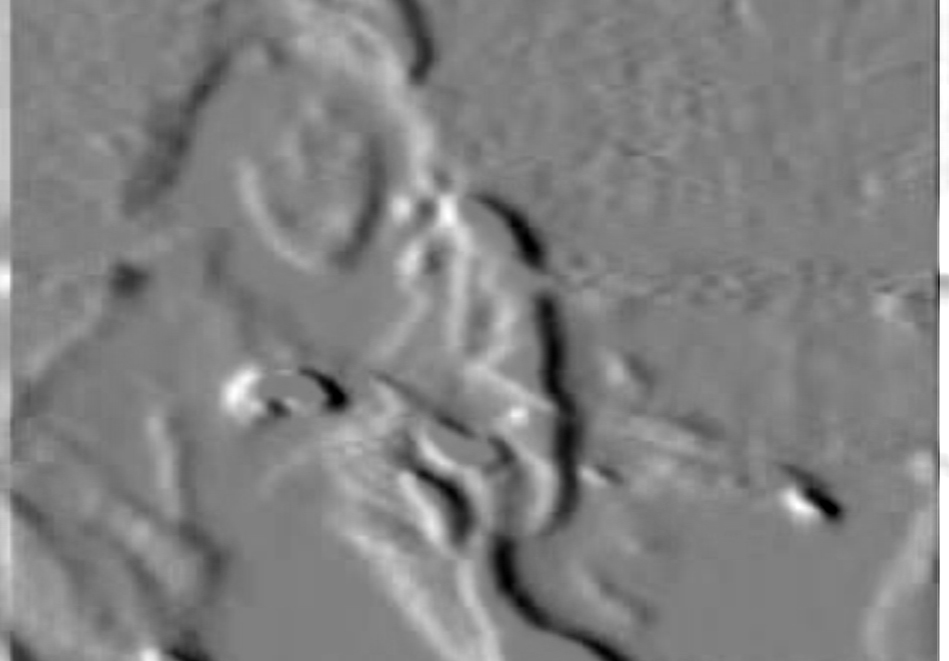 And this filter is called the “find edges” filter: 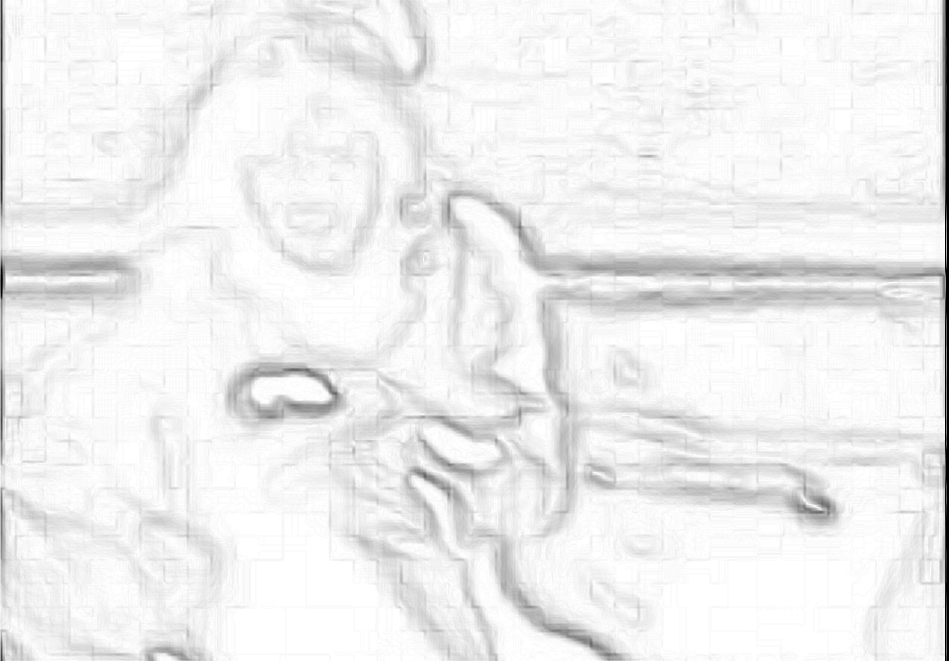 I also worked a little with the image in Blender, extruding the image after I had imported it as a “flat plane”, 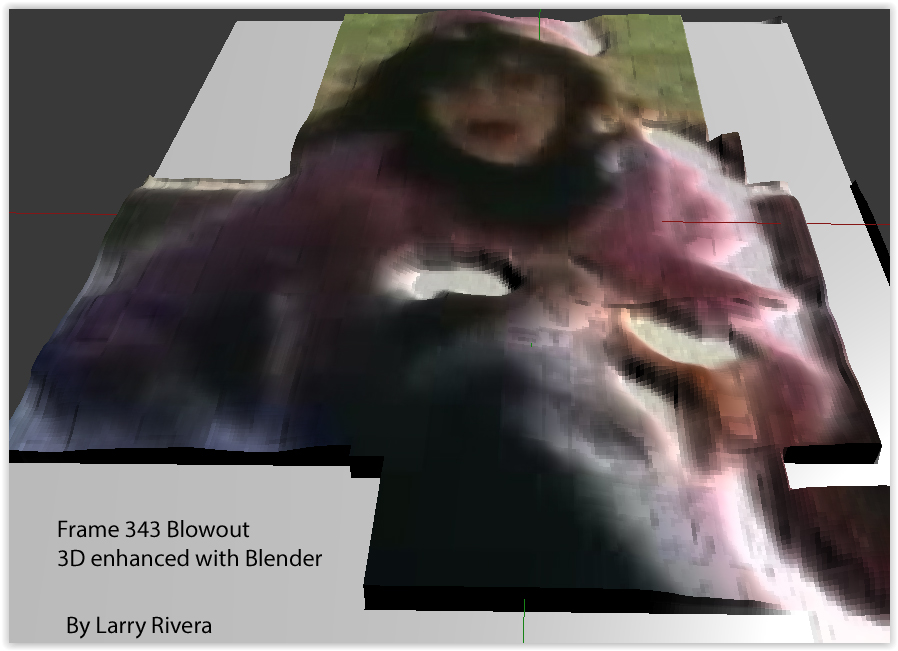 A common tool used in Photoshop to enhance and define the outline of components of a photograph is the Magic Wand tool.  We can define this as Photoshop on autopilot, where the software works independently by identifying changes in pixel patterns.  When we click on the area in question, this is the result: 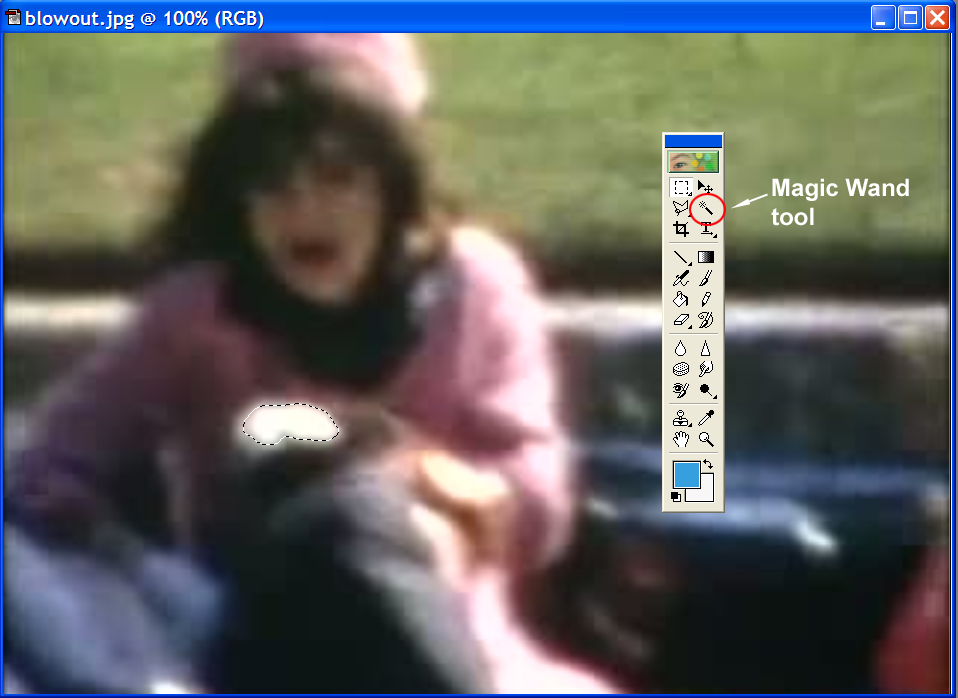 Once we have our outline, we can fill it in by “stroking” the outline: 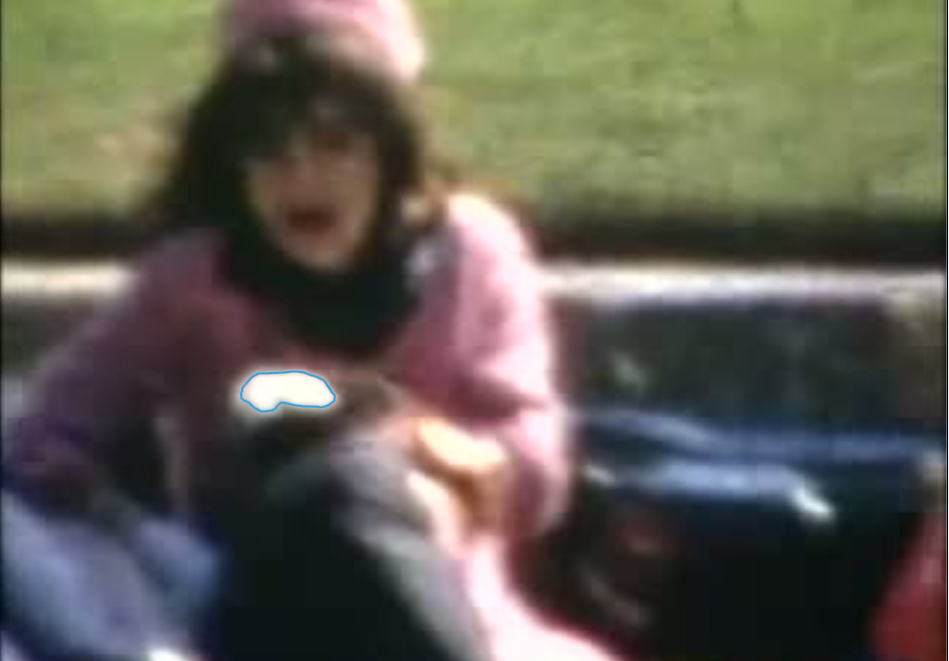 The results closely match the work that was done manually.

Today, however, I figured it would be nice to see what Photoshop could do in the area of gradient map studies of the image.  First, the definition of gradient mapping:

We begin by stripping the image of all color: 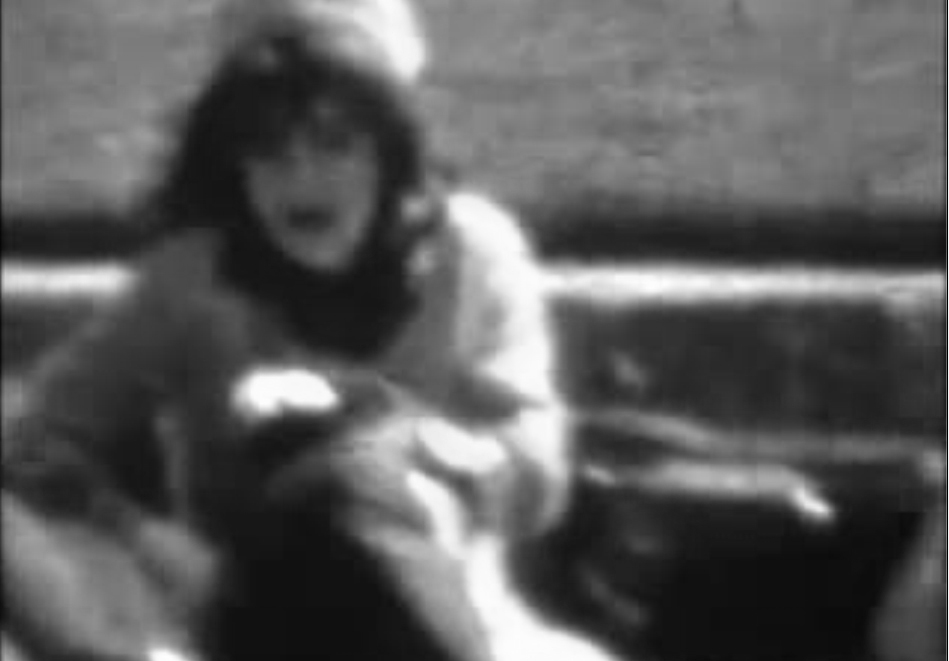 Our first Gradient Map rendering is a positive image: 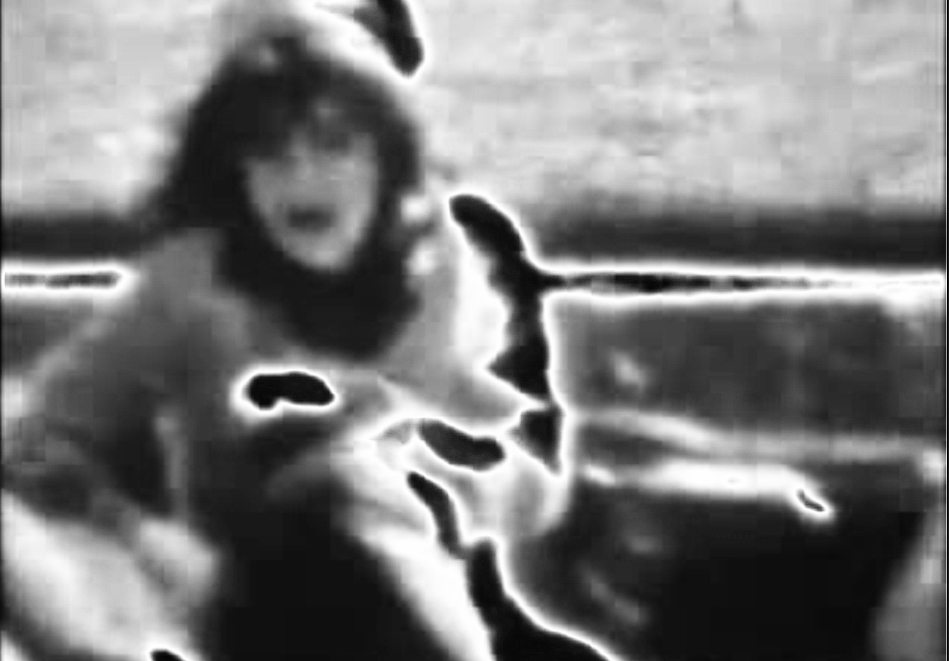 And this one is the negative version of the above: 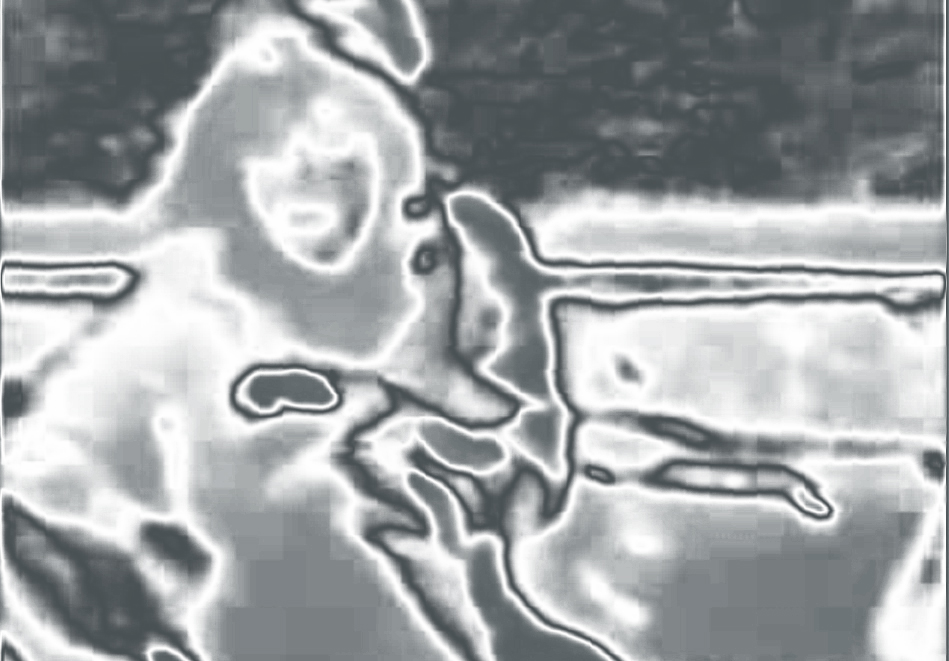 All of these tests confirm the anomaly in the back of what was left of JFK’s head.  There’s just no way to deny it.  You are welcome to right click on any of these images and run the tests yourself.

This post came up on a JFK forum, trying to explain away my research on frame 343:

“I can see the “possibility” of it, but my first impression is that it seems from these frames that Jackie’s left hand is actually on the back of JFK’s head. Watch the motion of his head/body in connection with the motion of her hand. It appears as if she is almost pushing him forward as she is moving to the trunk”

Fair enough – No one is infallible, and the best part of research and publishing your work, is  being able to react in a scholarly manner to someone who is in disagreement, and provide  documentation in support of your thesis. Let’s begin with Jackie’s suppressed Warren Commission testimony.

Jackie Kennedy’s Warren Commission testimony was a joke. It covered all of three pages (WC5H178).  On page 180, right when she was describing JFK’s massive head wound, the Warren Commission decided to suppress her testimony with this notation: [Reference to wounds deleted]

In 1972, this suppressed testimony was finally released.  Serious JFK researchers picked up on it immediately, realizing the importance of what she said. This is how J. Gary Shaw and Larry Ray Harris dealt with it in their 1976 book “Cover Up” : 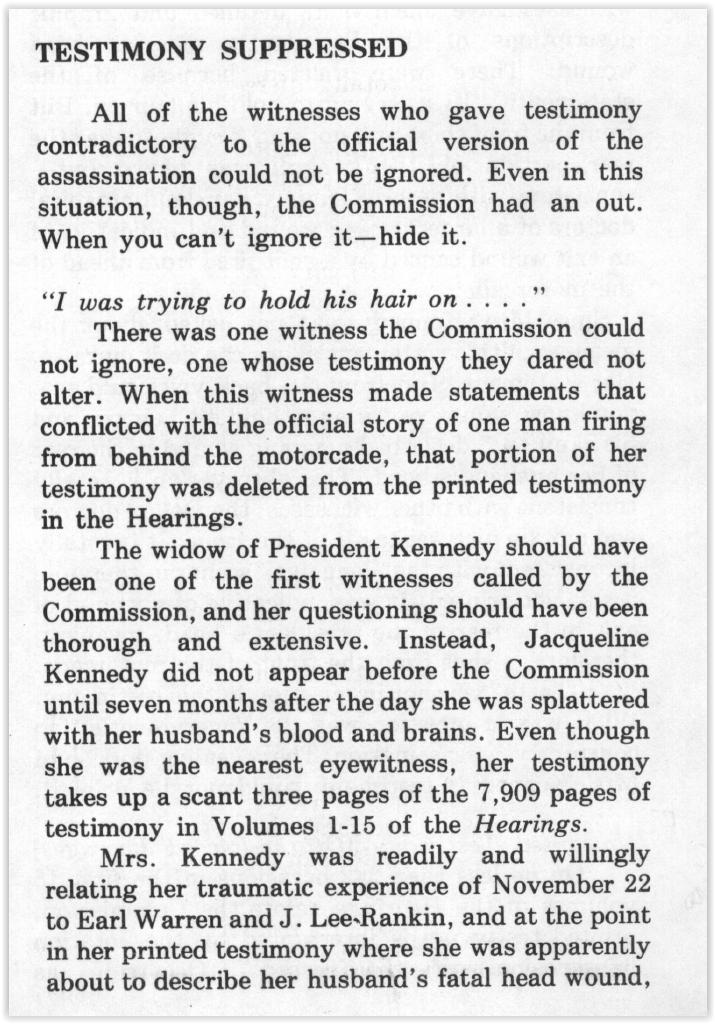 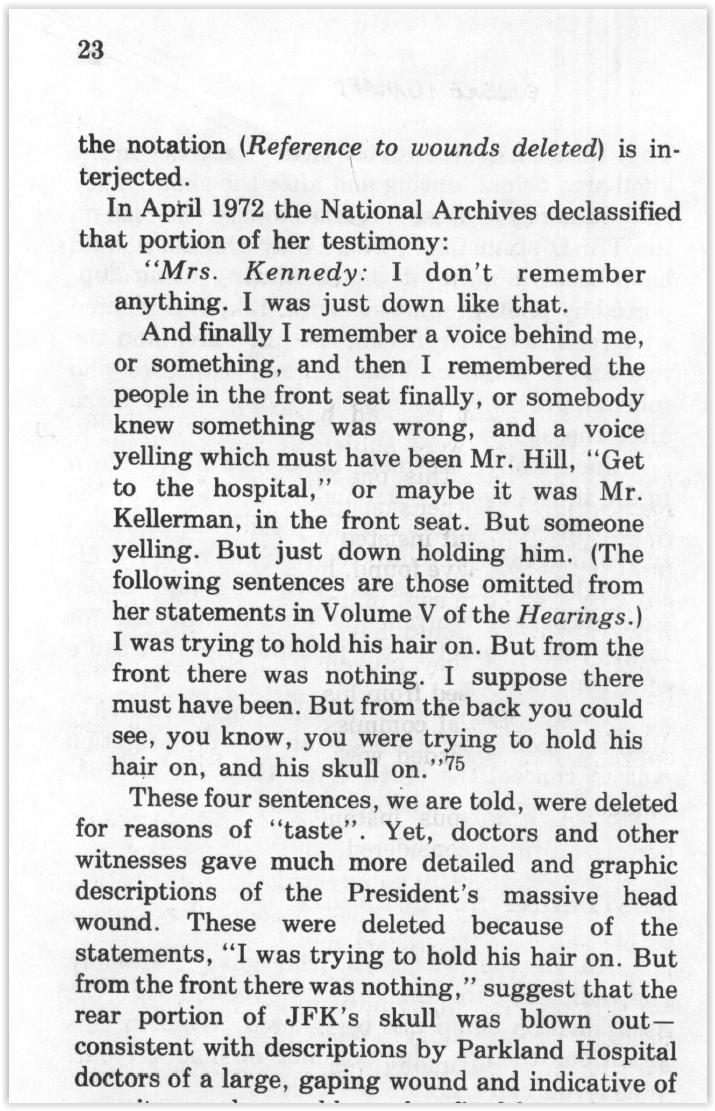 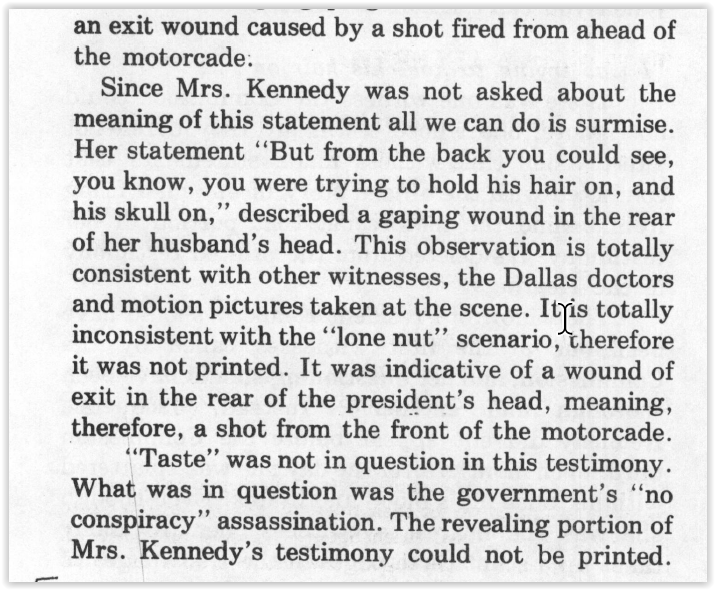 In 2001, Mark Sobel wrote this great article in the JFK journal Assassination Chronicles, (Vol 7 #2) where he deciphered the actual stenographer’s tape, which left absolutely no doubt about what Jackie said: 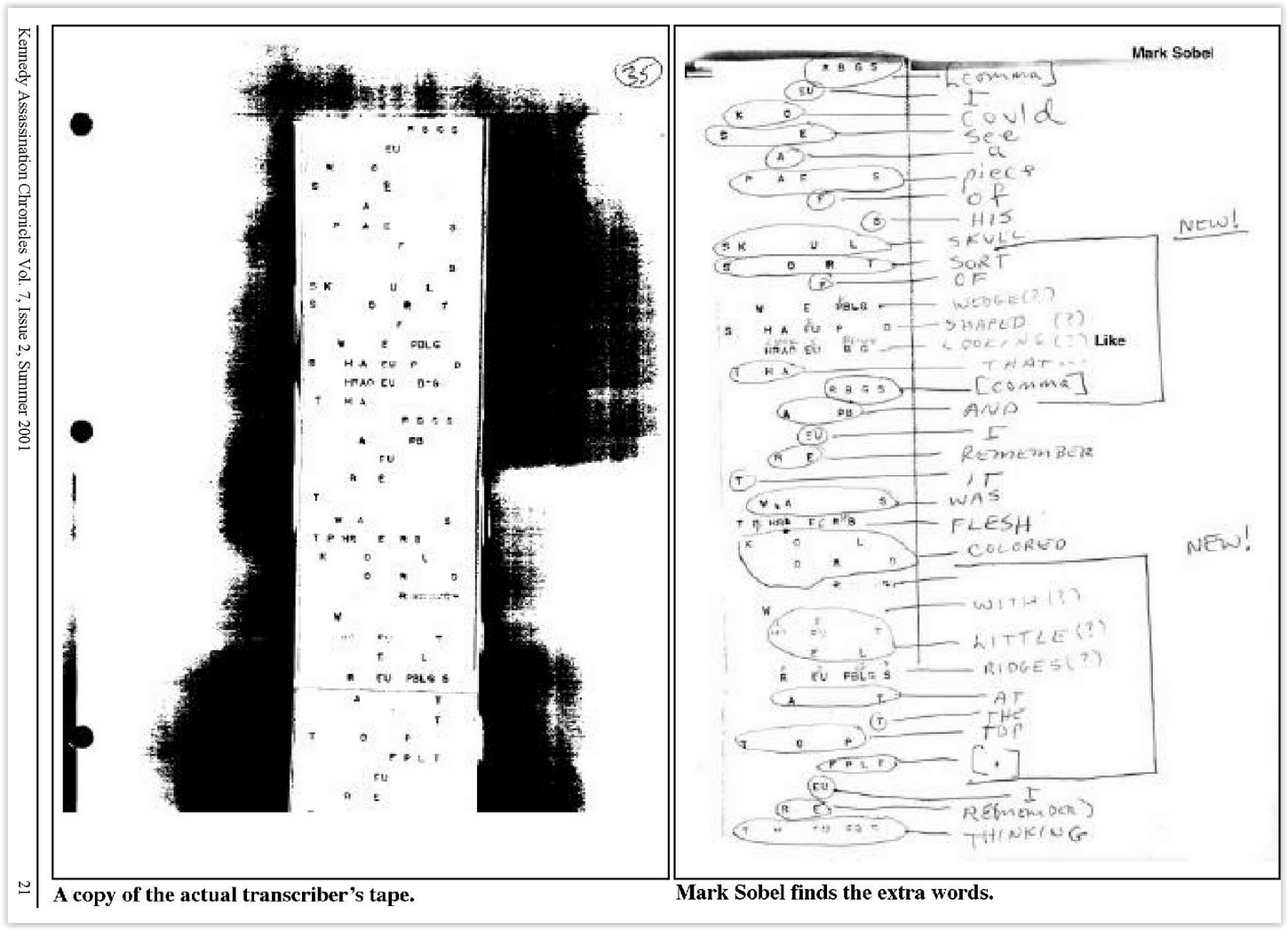 So I decided to look for more evidence of the blowout in frames adjacent to Z343. Here are two which show her white glove, “growing” out of JFK’s skull. Notice the wrap around of the head, where again, her white glove provides the perfect background as noted above. 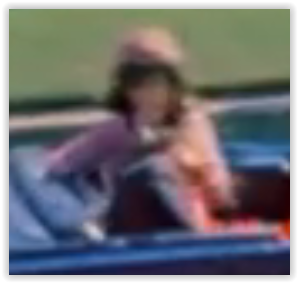 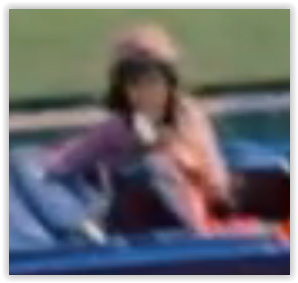 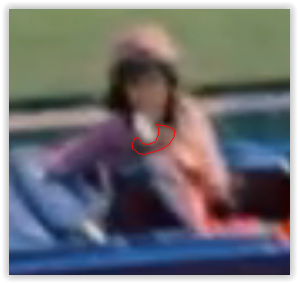