Orestes Peña was a Cuban exile barkeeper in the French Quarter in downtown New Orleans at the time of the JFK assassination. He ran a bar and hotel, the Havana Bar on Decatur.  Harold Weisberg drew heavily on his  personal relationship with Peña for his book “Oswald in New  Orleans”. 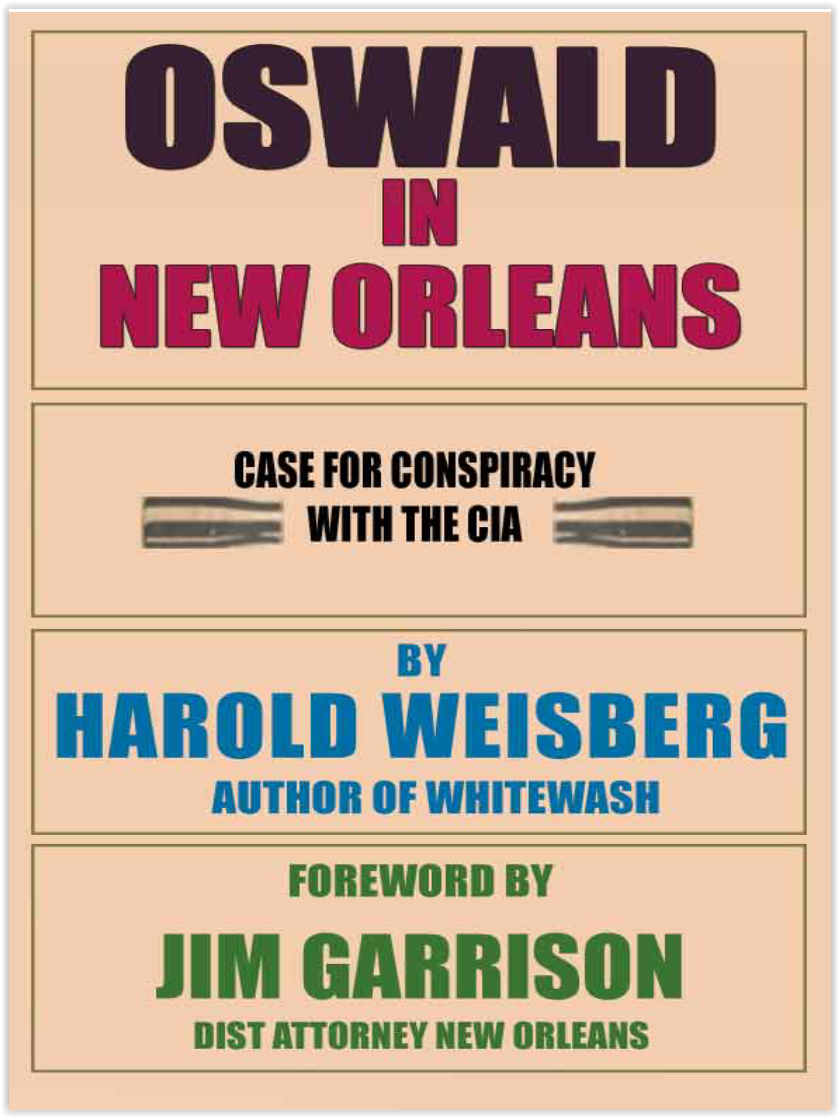 Peña first contacted Weisberg via an unsolicited letter on March 26, 1967, (OINO pg 135) after reading his book “Whitewash” (1966), and maintained contact with him for some time thereafter.   Peña is also the person who actually bailed out Carlos Bringuier from jail the day he and Lee Oswald were “arrested” in that fracas down on Canal Street on August 9, 1963. This might seem off topic, however, I have maintained on and off contact with Carlos since March 2013.  At that time, he  told me in a phone conversation that “Castro killed Kennedy” (“Rivera, a Kennedy lo mató Fidel Castro”) but refused to engage me in any debate or discussion about why he thinks that to be the case.  Bringuier  wrote a book on Lee Oswald, “Red Friday“, which was once reviewed by renowned OIC Senior Member, Professor and author David Wrone:

Late afternoon on Friday, November 22, 1963, Bringuier called the news media to state that he thought Lee Oswald was either FBI or CIA, and that Lee was trying to infiltrate his group, the DRE, AKA AMSPELL.  This is how the newspapers in New Orleans reported it: 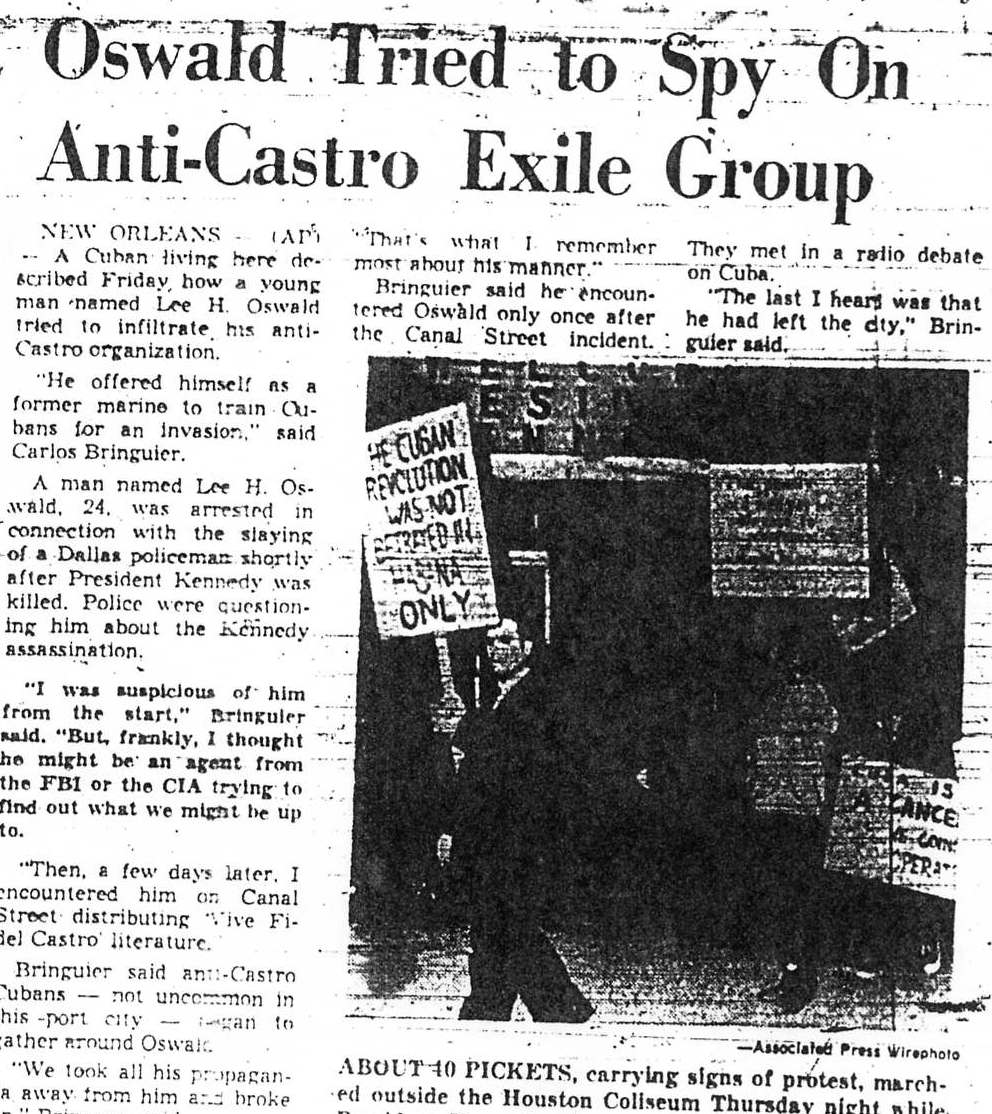 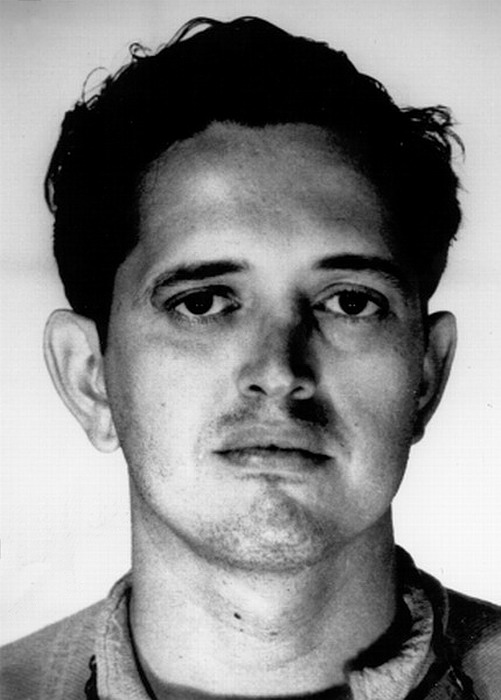 In November 2014, while in New Orleans, and in the company of Jim Fetzer and Gary King, I called Carlos and left  voice and text messages  on his phone in the hope of obtaining an interview, but was unsuccessful, and never obtained a response.  He keeps me on his mailing list, however, and at times sends information on how great Cuba was  before the Castro revolution, about how many T.V.’s, radios and cars existed per capita at the time, as well as other outdated nonsense.  Carlos contributes to a website here with some of his writings http://amigospais-guaracabuya.org/#bringuier . The reader can plug this into translate.google.com to appreciate Carlos’s insights and how his mind works.  One time, Carlos emailed that he had sued Harold Weisberg and won the lawsuit, which is doubtful. In fact, Harold went to New Orleans  in the hope that Bringuier would  serve him, because he was anxious to counter sue and draw him into discovery phase of whichever lawsuit Bringuier’s lawyers could bring against him.  But enough about Carlos.

In the very latest ARRB/National Archives document release, a very rare and long- sought after HSCA document was quietly released –  the testimony of Orestes Peña: 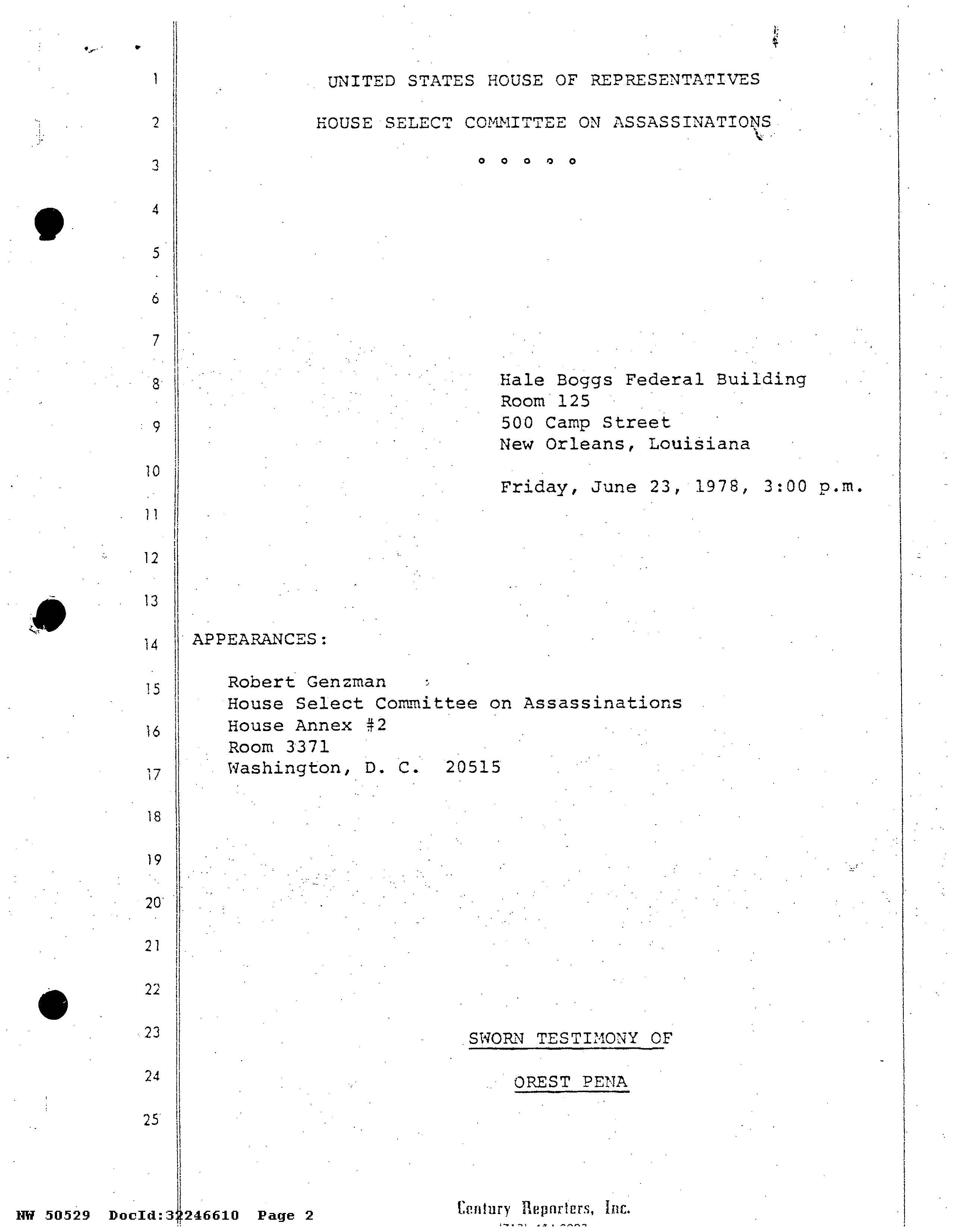 If you really want to know what went down in New Orleans that summer, this is the place to start. You will also understand why this document was suppressed for so long. 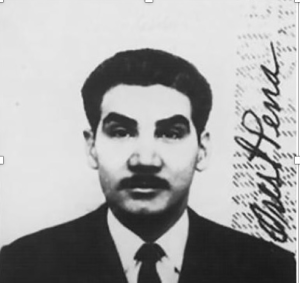 Orestes Peña appears to be one of the unsung heroes in the JFK assassination saga.  This man was feared by those who covered up the “Crime of the Century” because Peña, as a barkeeper, knew what was really going on in New Orleans at all times.  Everyone knows that when people drink, they tend to talk too much, and that is exactly what Peña was privy to.  He never deviated from his story, even after receiving a beating which landed him in the hospital.

It is beyond the scope of this post to cover the vast amount of information revealed by Orestes, so I will summarize below: 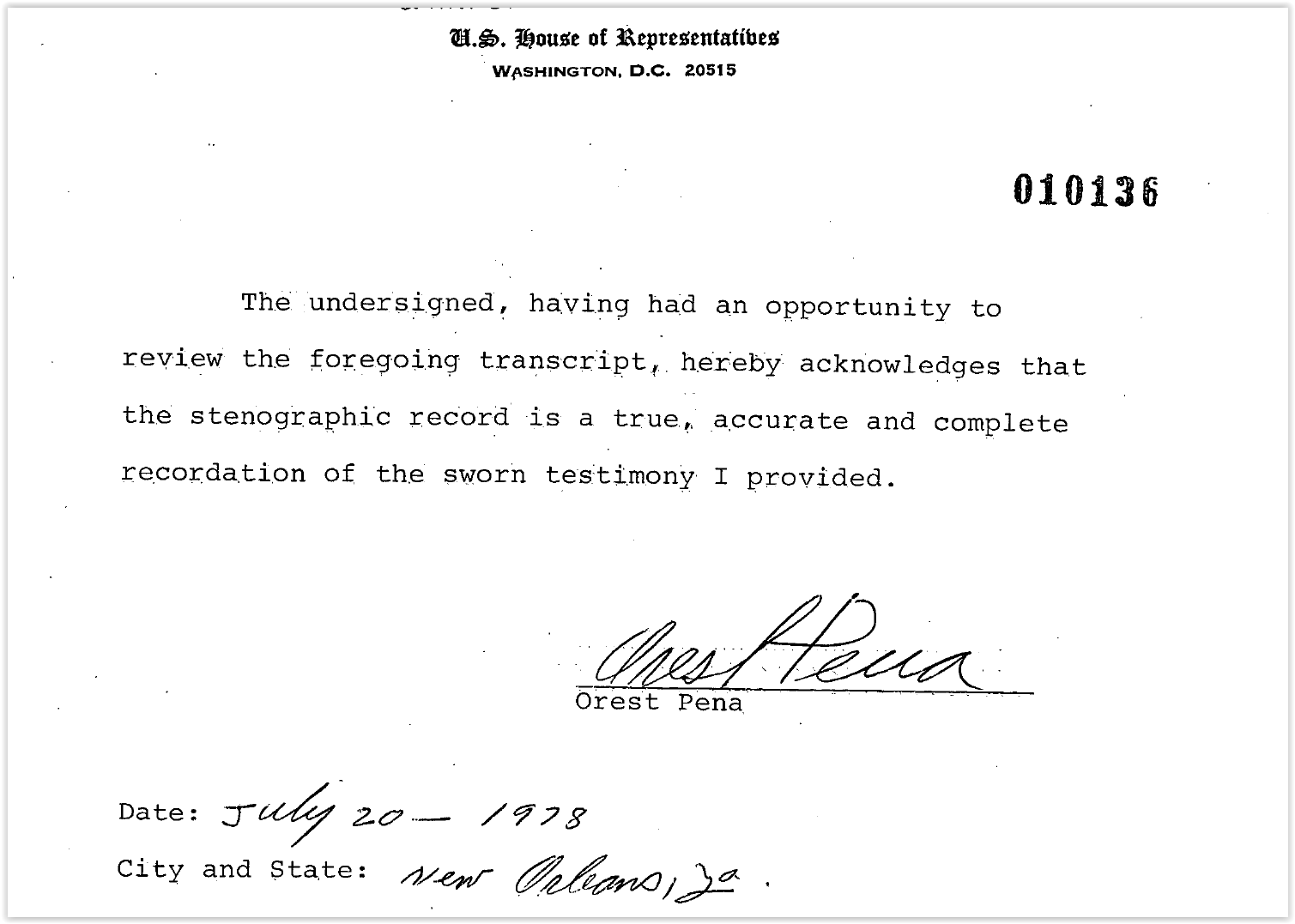 Peña’s testimony reveals “another agency” which he worked for and refused to identify.  Jim Garrison puzzled over Peñas exotic and frequent travels during this key period.  Perhaps this document provides indirect confirmation of a connection to this “other agency”. 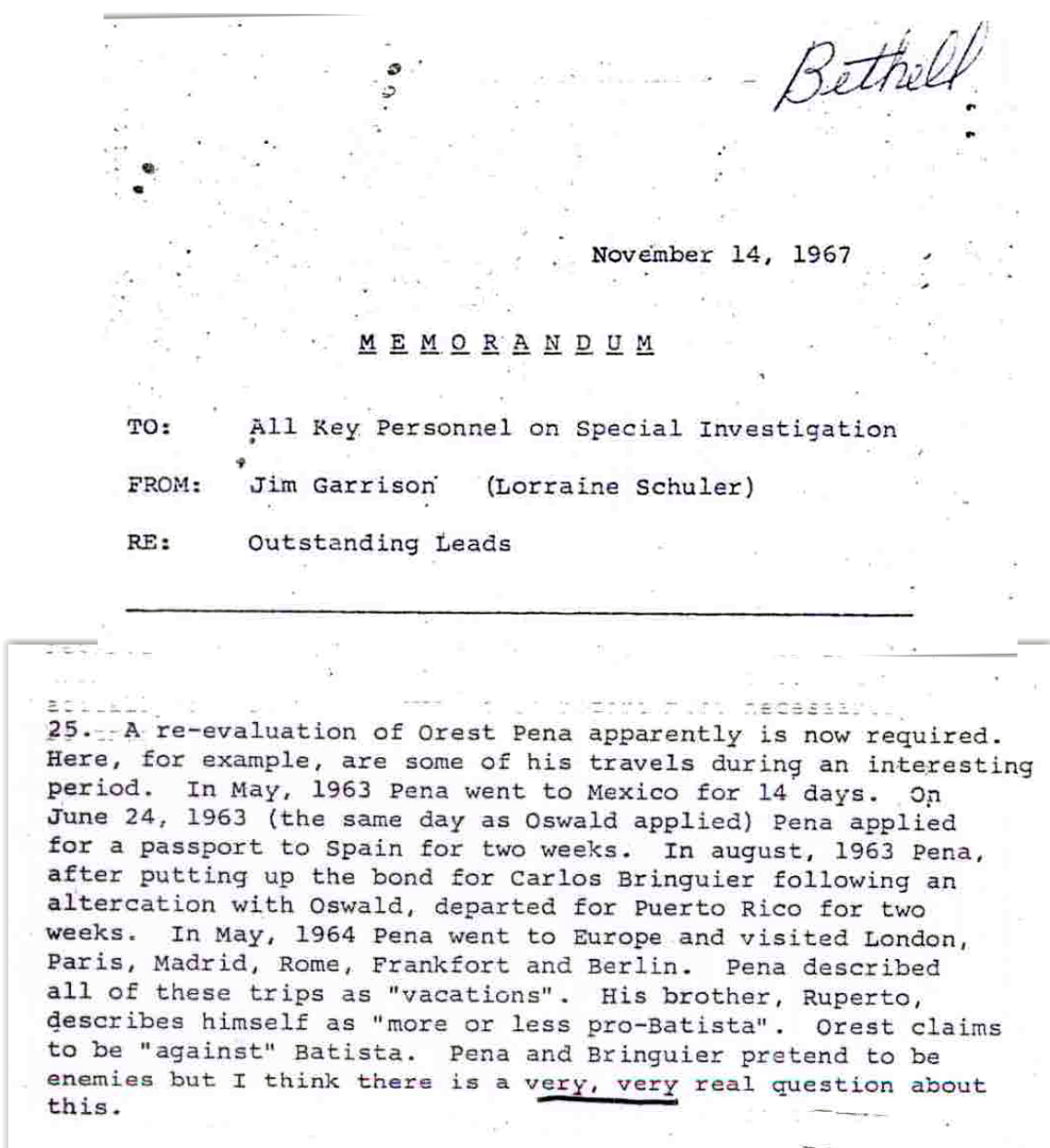 Which leads one to wonder  what kind of falling out he might have had to provoke his ire with the FBI and De Brueys.  More grist for the mill.

Finally, De Brueys bolted out of New Orleans for Washington D.C.,  when Jim Garrison tried to serve him with a subpoena to testify before a grand jury for the Clay Shaw trial. 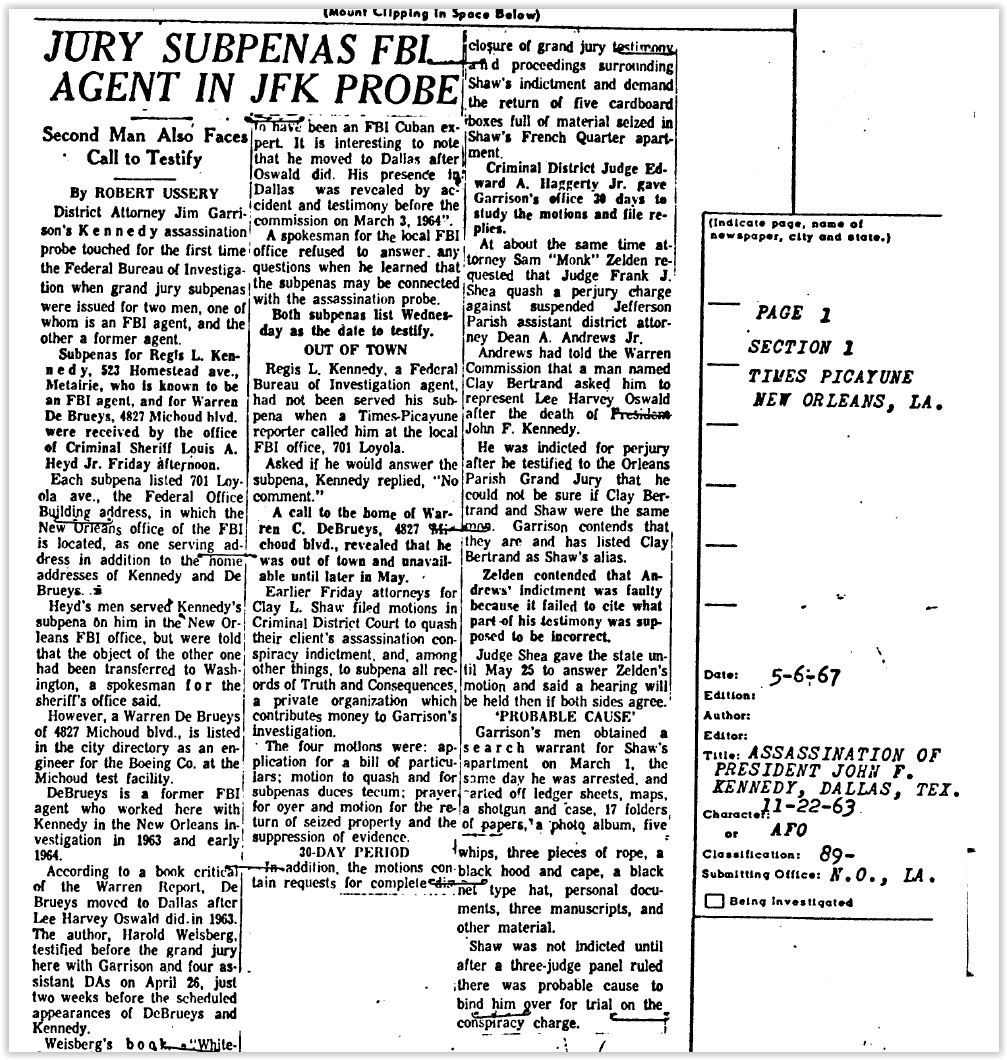 De Brueys ignored the citation and later bounced around South America for some time, even serving as SAIC in San Juan, Puerto Rico in 1974-75.  Great places to stay out reach of those who wanted him to say what he knew about Peña, Oswald, and what happened in New Orleans that summer.