Officially, LIRING-3’s relationship with the CIA lasted from May 27, 1966 to 29 August 1969.  His travels and assignments took him to several different Latin American countries – Guatemala, Honduras, El Salvador, Panama, all the way down to Venezuela, always reporting back to Wallace Rowton.  Rowton first met Carlos Jurado Delmar at an art exhibition where Jurado was exhibiting his paintings. Initially, Rowton disguised his approach as a businessman who wished to continue to do business with Cuba through back channels in Mexico, inasmuch as trade embargoes against Cuba were in place and growing in scope.  As the relationship matured, however, and Jurado and Rowton became familiar with each other, the veil of secrecy was lifted and Jurado became fully aware of who he was really working for.  Rowton shifted his attention to obtain intelligence on guerilla organizations whose proliferation needed to be held in check or halted. Here is a memo that illustrates the importance of LIRING-3: 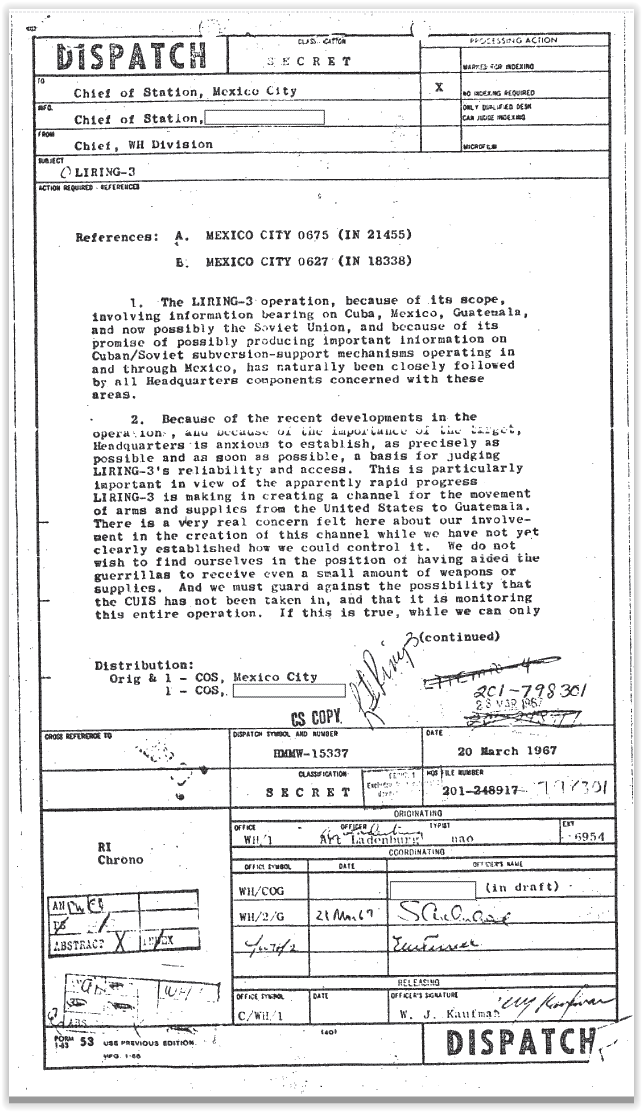 Every Boris has his Natasha and LIRING-3 was no different.  The new documents reveal the identity of LIRING-4, who happened to be LIRING-3’s wife. Miriam Chichay was Cuban-Chinese and worked at the Cuban Consulate well after the assassination, 1965-66. She met LIRING-3 while he was living in Cuba in 1961-1964. Miriam accompanied Jurado the very first day that Rowton pitched him, and was privy to all of LIRING-3’s activities.  The couple was easy pickings for Rowton.  He described the meager conditions in which they lived, the ragged and simple clothing they were wearing, and the overall lack of basic necessities which they could ill afford at the time. Jurado made ends meet by selling his art whenever he could, and giving art lessons to anybody who was willing to pay a couple of pesos.   Miriam was still a Cuban national and was a perfect asset to go back and forth to Cuba as an informant for Rowton without drawing any undue attention.  In this manner, Rowton appears to have divided their responsibilities – LIRING-3 was now to work with Central American guerillas, and LIRING-4 was to continue to travel back and forth to Cuba and report back to Rowton.  He could not have planned it any better.

On numerous occasions, Rowton is described in cables as being “TDY”, which in military parlance is known as “Temporary Duty”.  Montreal Canada, Brazil, Europe, the U.S. are but a few of the countries and cities frequented by Rowton.  He always ended up in Mexico City, however, scheduling meetings with LIRING-3 and his wife in restaurants, galleries, and other public places. As mentioned in our previous post, Rowton also paid for and maintained a safe house for  Carlos Jurado, AKA LIRING-3.

Guatemala was a very important commodity for U.S. interests. In 1954 the CIA promoted the ouster of democratically elected President Jacobo Arbenz, who had introduced land reform which distributed land parcels among peasants on a scale never seen before in Guatemala. U.S. companies such as United Fruit were obviously calling for U.S. intervention, and the CIA was more than happy to oblige. David Atlee Phillips, the propaganda specialist, later boasted how easy it had been to drive Arbenz out of Guatemala. Arbenz would later die in exile in 1971.

In our previous post, we presented documents which described the cloak and dagger antics of the Jurado-Rowton relationship.  Eventually, Rowton convinced Jurado to venture into the Guatemala jungle to meet insurgents and report back on what he could find out.  This cable shows how LIRING-3 was able to penetrate these groups and even position himself as an alternate supplier of arms to the FAR (Fuerzas Armadas Rebeldes): 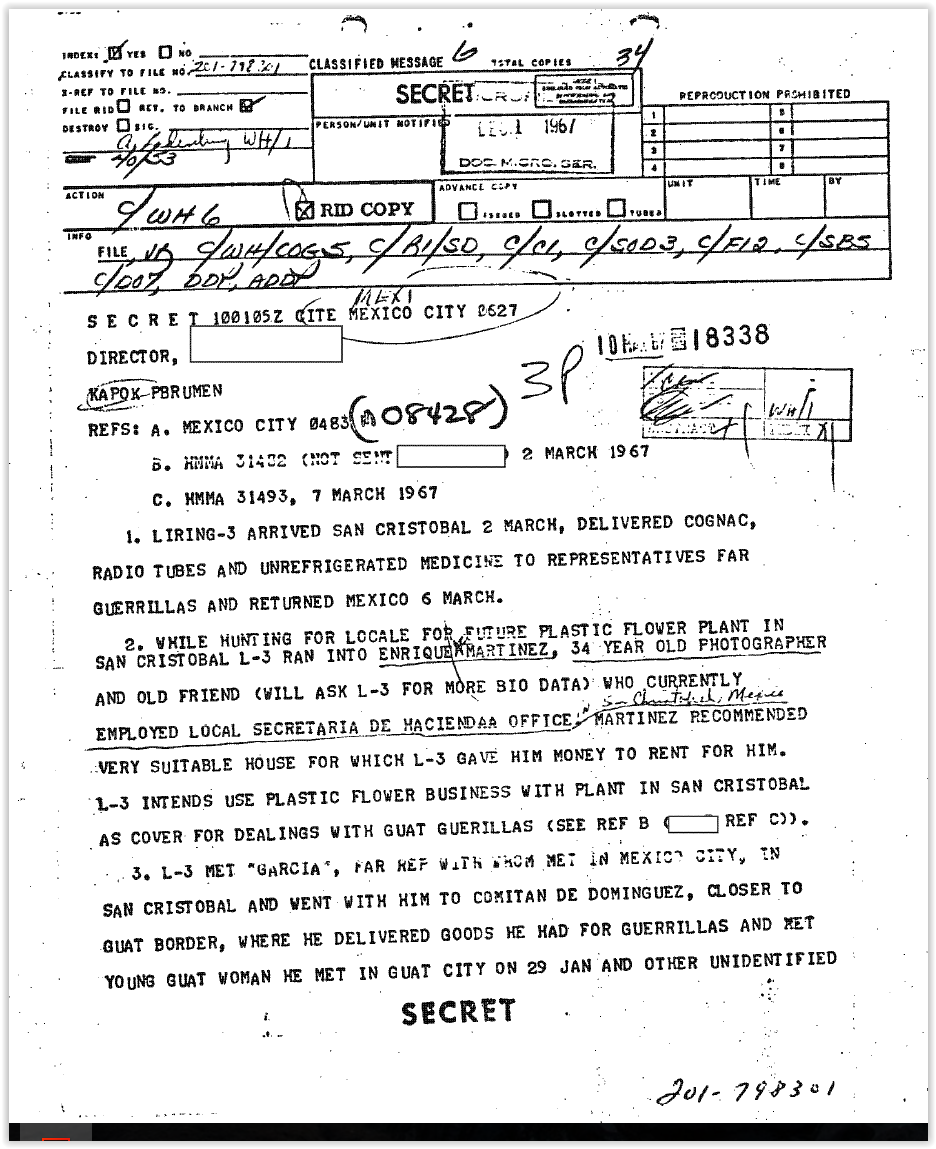 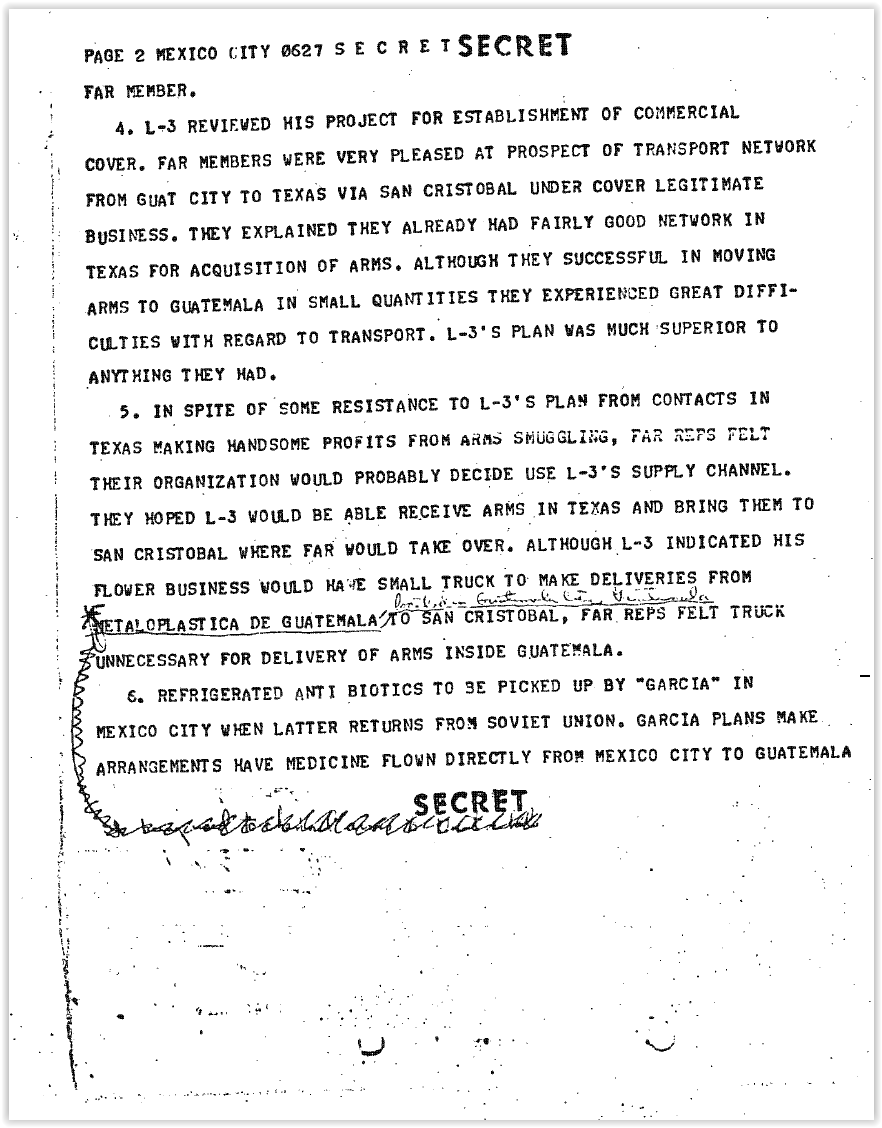 Note: A curious reference to “refrigerated antibiotics” keeps popping up throughout LIRING-3/Wallace Rowton Guatemala FAR reports (see #6 above). In other instances, they talk about “radio tubes and antibiotics”. This cannot be a coincidence.  “Radio tubes” and “antibiotics” has to be some kind of code. 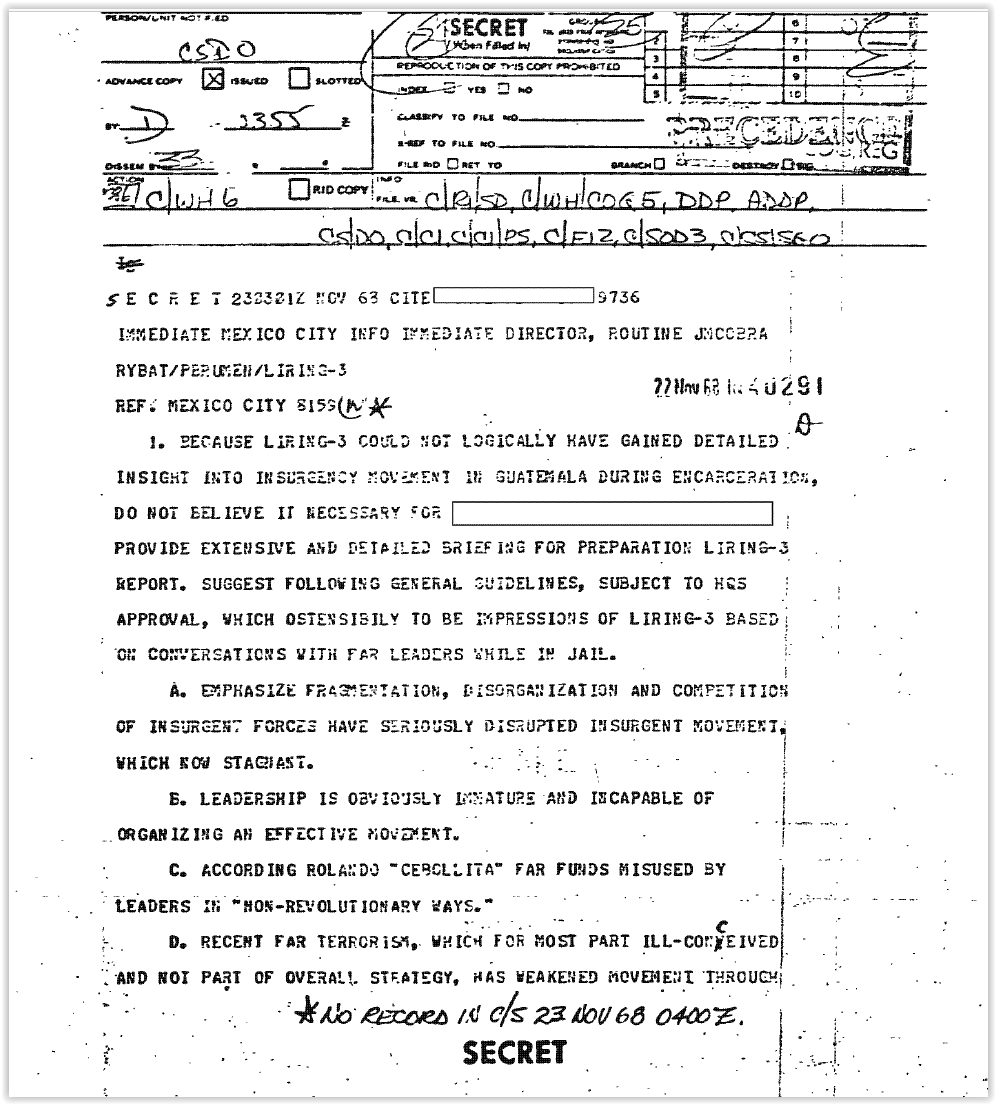 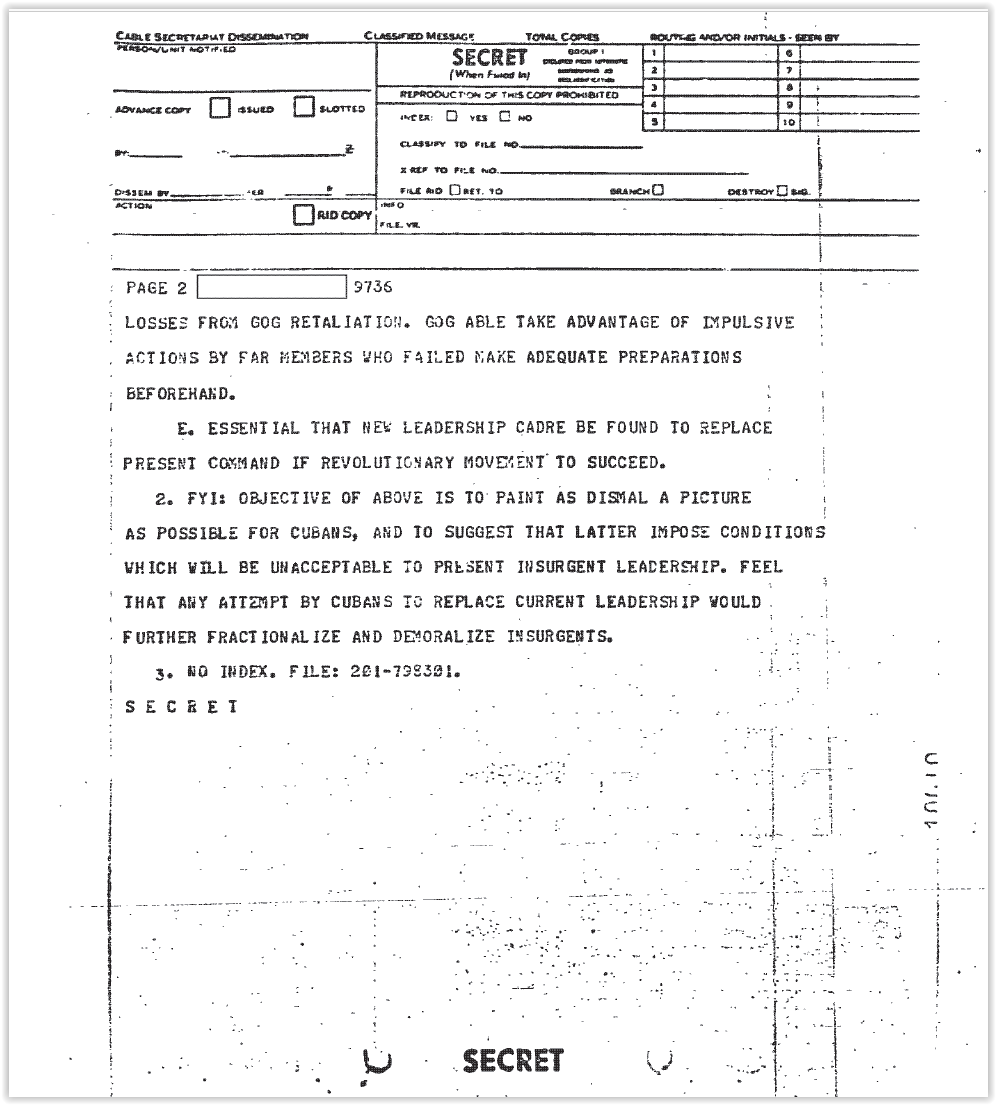 Eventually, LIRING-3 ended up in jail in Guatemala. The Guatemala army arrested Jurado and Carlos Perzabal, a University of Mexico professor on April 13, 1968.  This contemporary Spanish magazine ran a full-page story on Jurado Delmar’s predicament: 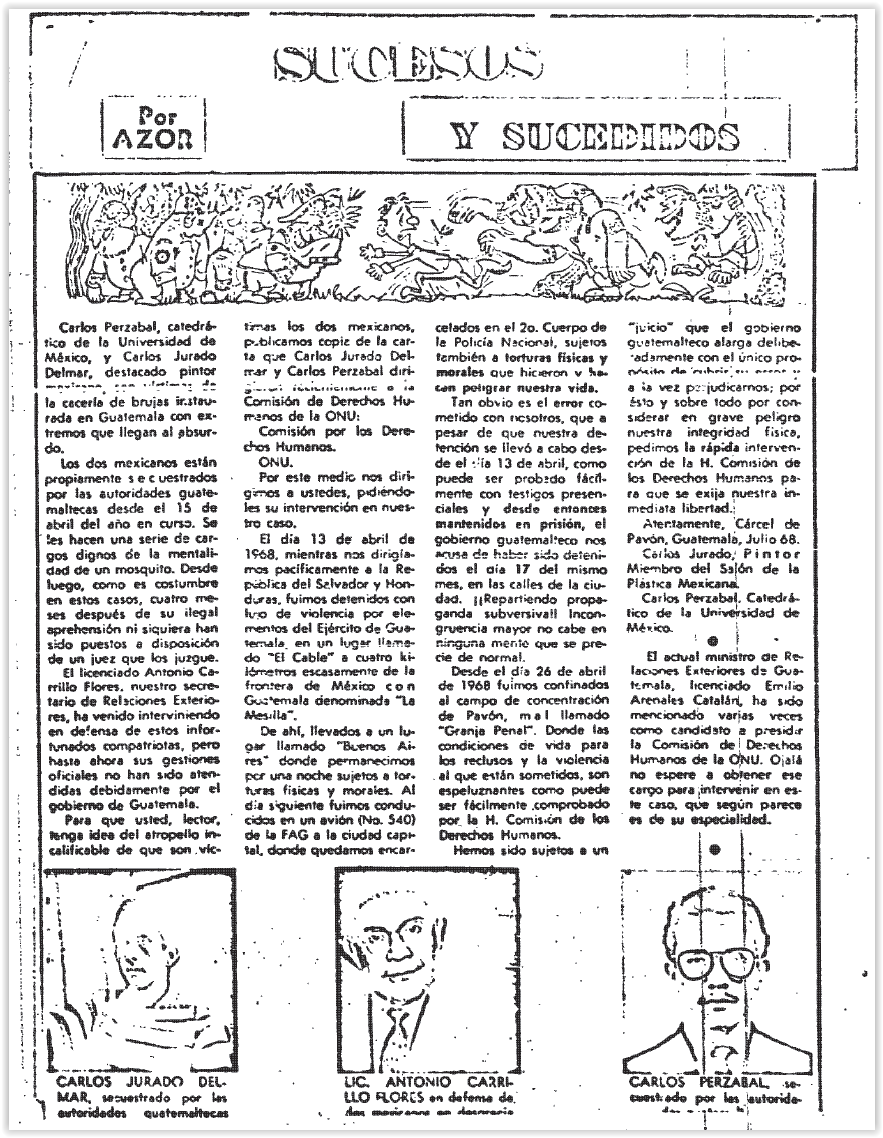 The author begins by calling their incarceration a witch hunt, (cacería de brujas) and actually ridicules the Guatemalan government for holding Jurado and Perzabal in jail for 6 months.  According to the article, it was not just any jail. It was a notorious “concentration camp” called “Granja Penal” (Penal Farm), which in the past had been denounced before the Human Rights Commission.  It also says here that during their odyssey, they were submitted to both mental and physical torture.  This, according to the article, because of the distribution of  “subversive propaganda”, four days after their initial arrest!  This is clearly an example of how the Mexican media defended Jurado and Perzabal, not knowing the true nature of Jurado’s forays into Guatemala. Had they known that Jurado was a spy, surely the tone of the news story would have been entirely different, if reported at all.

Miriam was worried sick, and she kept pressuring Rowton to do something for Jurado.  Rowton appears to have used Jurado’s predicament to pressure Chichay to go back to Cuba (PBRUMEN) on intelligence missions. This cold-blooded memo by Win Scott (Willard C. Curtis) describes the attitude of the Mexico City Station regarding LIRING-3 and LIRING-4. 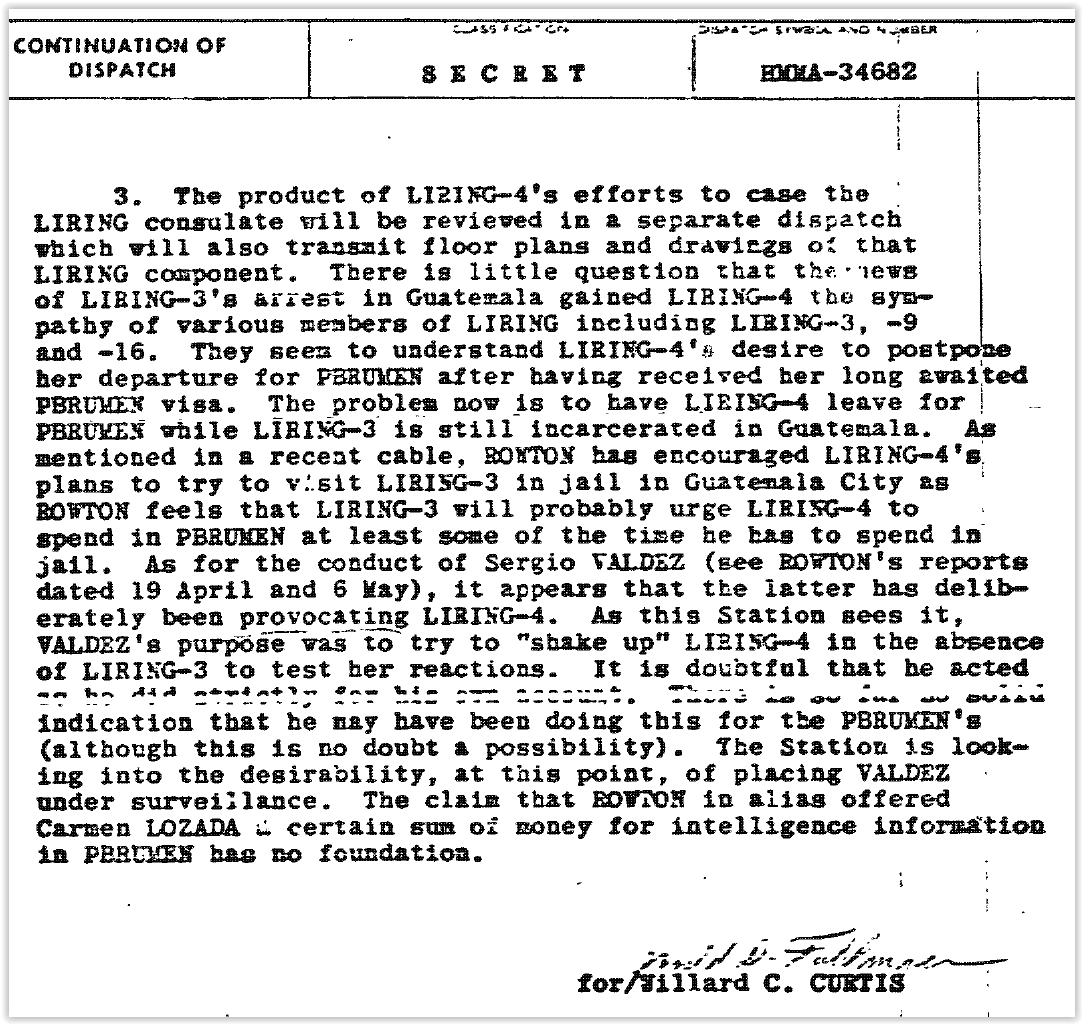 The LIRING station later helped her travel to Guatemala to see her husband in jail.  Jurado was released in October of 1968.

LIRING-3 eventually was dismissed after he terminated contact with his agency handlers. 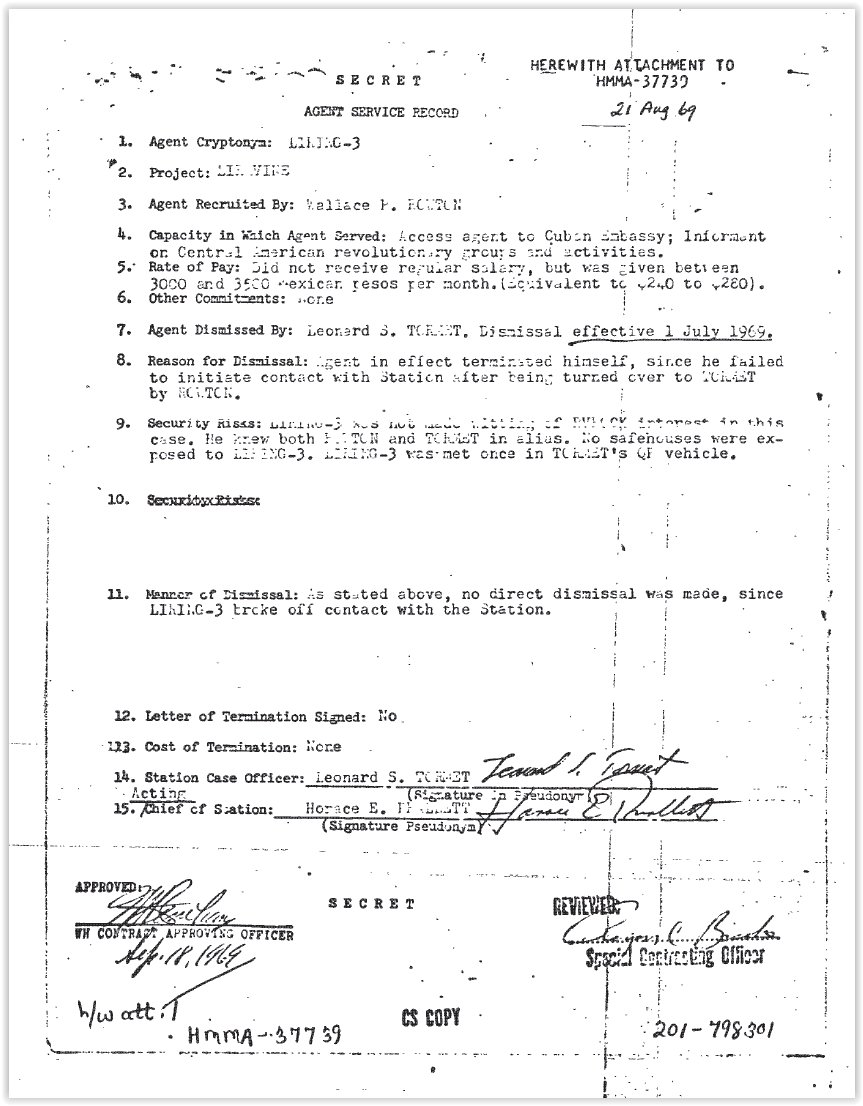 But who exactly was Wallace B. Rowton?? Even though some might consider this speculation, there is one individual who jumps out at us – David Atlee Phillips.  His familiarity with Guatemala, Cuba, Mexico, Dominican Republic, Chile – where he studied and learned Spanish,  and other Latin American countries make him a primary suspect.  Let’s review his “rap sheet”. Notice the “TDY” reference at the bottom of the page. That appears to be our wild card: 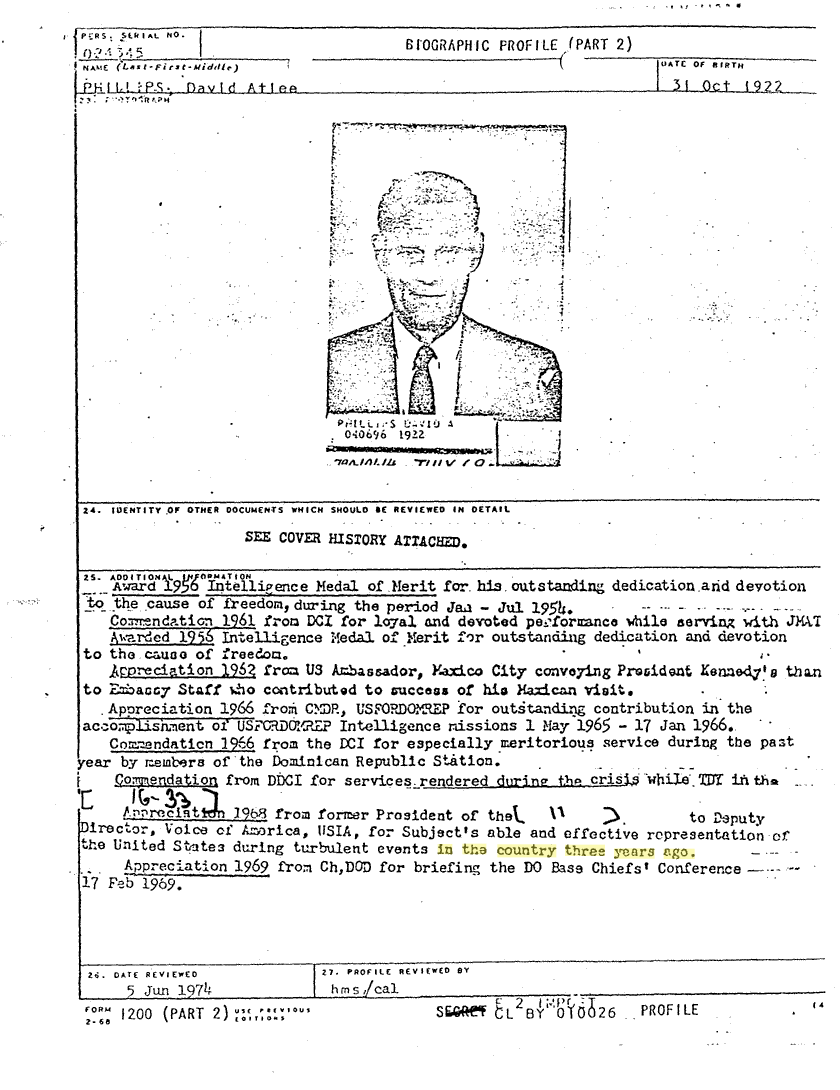 How often was Phillips on TDY? Check out this document from his days in Cuba in 1959: 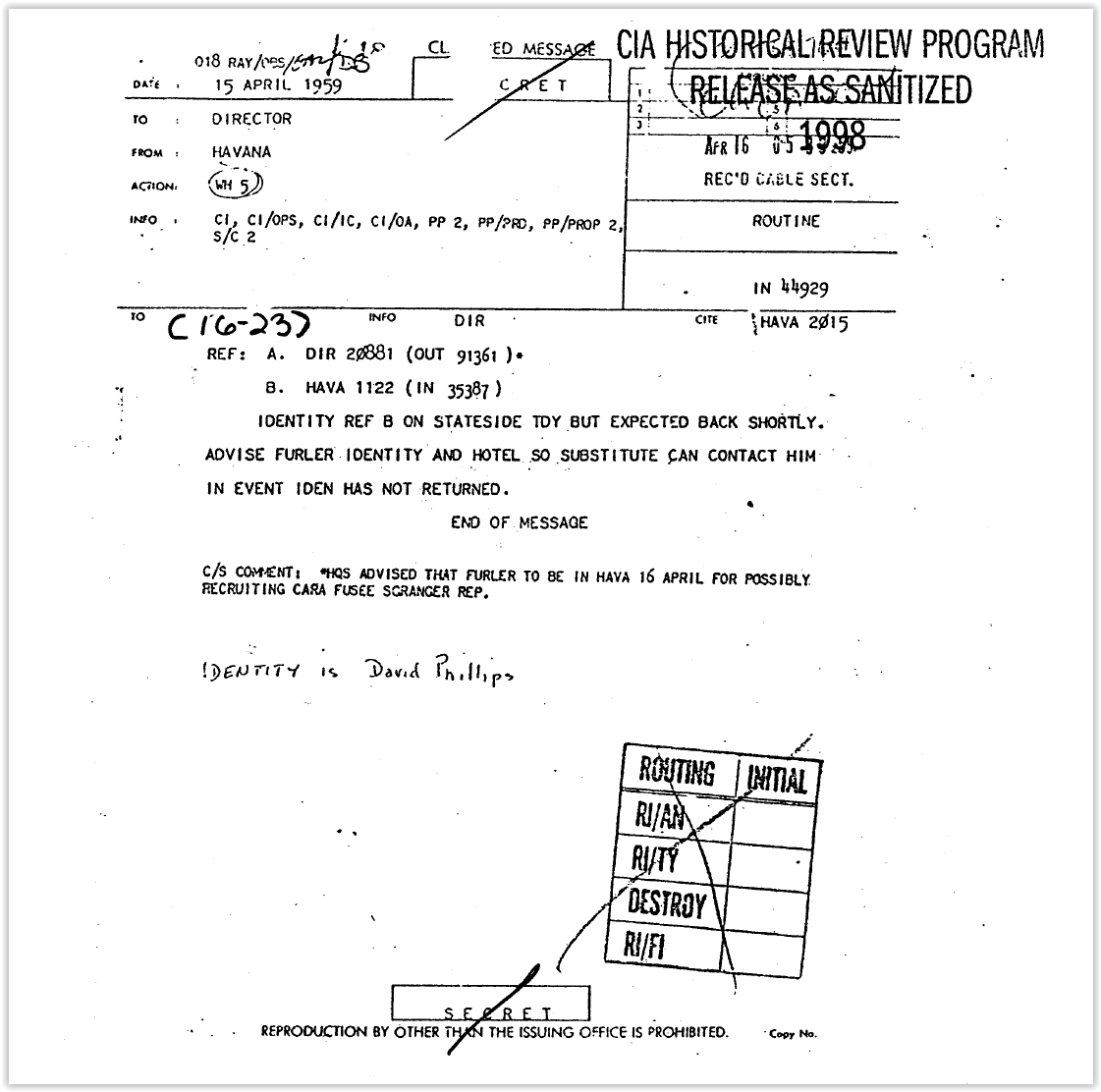 The second page of his biographic profile shows a chronology of his assignments: 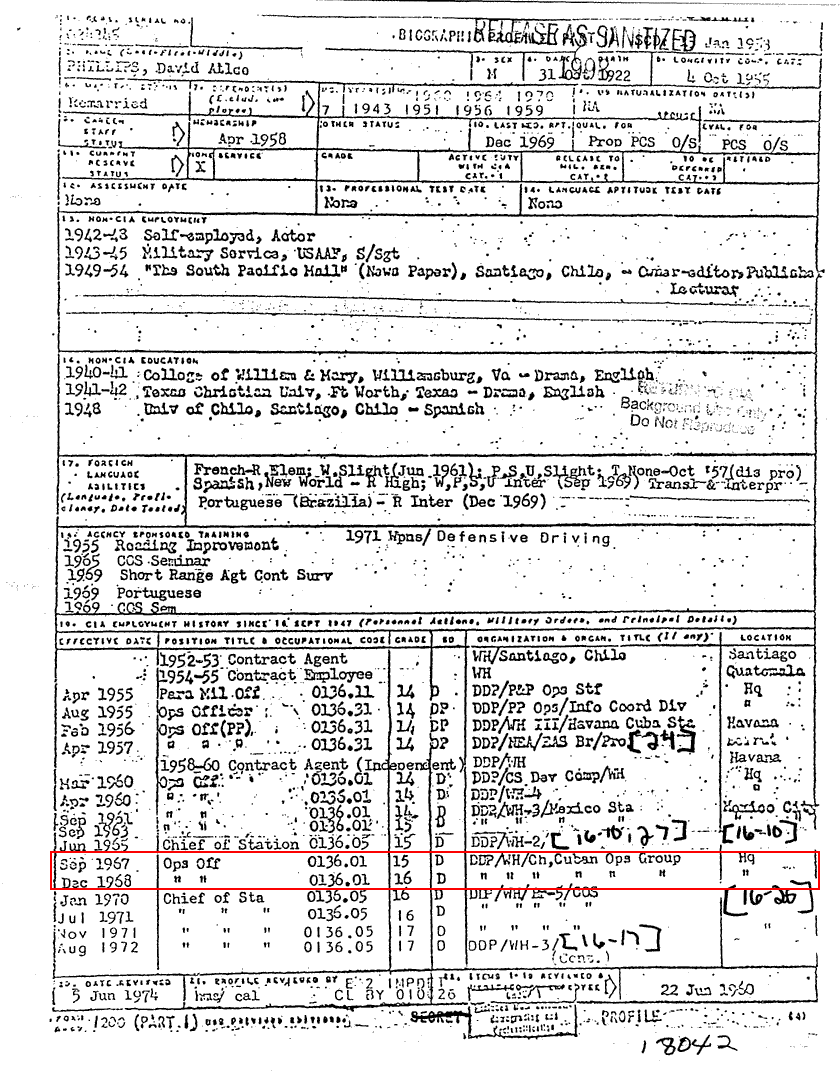 The peak years in which Rowton was handling Jurado show the following entries for September 1967-December 1968:

Was Wallace B. Rowton David Atlee Phillips?  There certainly is enough circumstantial evidence to suggest this to be the case, and the TDY option suggests that Phillips could have been overseeing LIRING-3 and LIRING-4 in 1967-68 from his official assignment at “Hq”, however, I admit this should be the subject of further investigation.

Returning to our assessment of LIRING-3’s credibility regarding the supposed Durán/Oswald affair, are you, the reader of this post, really convinced that Sylvia Durán went to bed with Lee Oswald??  Sylvia was married and had a three-and-a-half-year-old daughter named Patricia (104-10015-10357) .  When exactly was she supposed to have Lee over for an affair? (multiple times, according to official documents) Is LIRING-3 a credible source, four years after the fact, while being run by Wallace Rowton?  I will leave that up to you to decide, however, when the HSCA came looking for Jurado Delmar, AKA LIRING-3, in 1978, this was the result:

Jurado Delmar WAS NOT born in Cuba, he was a bona fide Mexican national (see documents cited in the previous post), AND he continued working for the CIA until 29 August 1969! This is pure deception, proving there was no way the HSCA was ever going to speak to Carlos Jurado Delmar, AKA LIRING-3, about Lee Oswald’s alleged love affair with Sylvia Durán.