In our previous post we offered an intimate and personal account written by Sylvia Durán in 1978 which described the abuse she endured at the hands of the Mexican police on behalf of U.S. intelligence agencies, as a result of her casual encounters with a “Lee Harvey Oswald” at the Cuban Consulate on September 27 and 28, 1963. Before we continue, it is worth noting that there is ample evidence of Lee Oswald being impersonated in the months and weeks before the assassination. The Bolton Ford incident, the Irving Shooting range incident, the Ralph Leon Yates incident, the Emerson Varner Price incident, the Robert Vinson incident are but a few that come to mind. Some of these involved an individual who made a point of attracting attention to himself, which later would be easy to recall or report by witnesses.

In her statement, she described how the Mexican police wanted her to admit she had several amorous trysts with a “Lee Oswald”, after she helped the man fill out and file paperwork for a transit visa to Cuba which would eventually land “Oswald” back in the Soviet Union. Her description of the man she met was at odds with the physical characteristics of the real Lee Oswald.  We were supposed to accept the allegations that she would immediately go to bed a few times with this stranger, who she described as short, unkempt, ungainly, loud, boisterous, rude, and belligerent.   Moreover, Consul General Eusebio Azcue had to threaten this man with forceful expulsion from the Consulate if he did not vacate the premises immediately. This individual did not speak any Spanish, period. Obviously not the same man Judyth Baker describes in her book Me and Lee, where she writes: “He said he could get around in Cuba with his eyes closed, though he needed to work on his Spanish.”  (pg 141)  Later, Azcue would state that the man killed in the basement of City Hall on 11/24/63 was not the one who he interacted with on that occasion.

The “Edwin Lopez-Dan Hardway HSCA report” , also known as “The Lopez Report” was suppressed for many years.  There is good reason for that. In this report, Lopez and Hardway set forth, in detail, their review of classified documents at the CIA, which could not conclusively prove that Lee had even been to Mexico City, let alone had sex with Sylvia Durán. For example, on page 369 of the Lopez Report: “During that interview, Mr. Azcue alleged that the man Jack Ruby shot in the Dallas Police Station was not the same individual who had visited the Cuban Consulate in 1963” (Footnote reference 783 – HSCA Interview of Eusebio Azcue April 1,1978 pp 12-21 JFK Doc # 007005 See p 205) Was Sylvia’s account accurate? When we compare, we find that just about all of her allegations are also confirmed by Lopez/Hardway in their 411 page report, which she could not have possibly had access to in 1978! But Lopez and Hardway went further in their investigation and determined that the Elena Garro de Paz allegation of Lee being invited with two other “beatnik” looking guys by Durán to a “twist party” was also of dubious credibility (See pgs 373-74). Wasn’t Oswald supposed to have been a loner? (Note: Elena Garro de Paz deserves a blog post all to herself which will be forthcoming) Enough for an introduction.

For the observance of the 50th anniversary of the Warren Report, the AARC celebrated a conference in Bethesda, Maryland, where Lopez and Hardway shared some of their experiences working for the HSCA and Robert Blakey, specifically, the Lee Oswald-Mexico City angle of the assassination investigation. 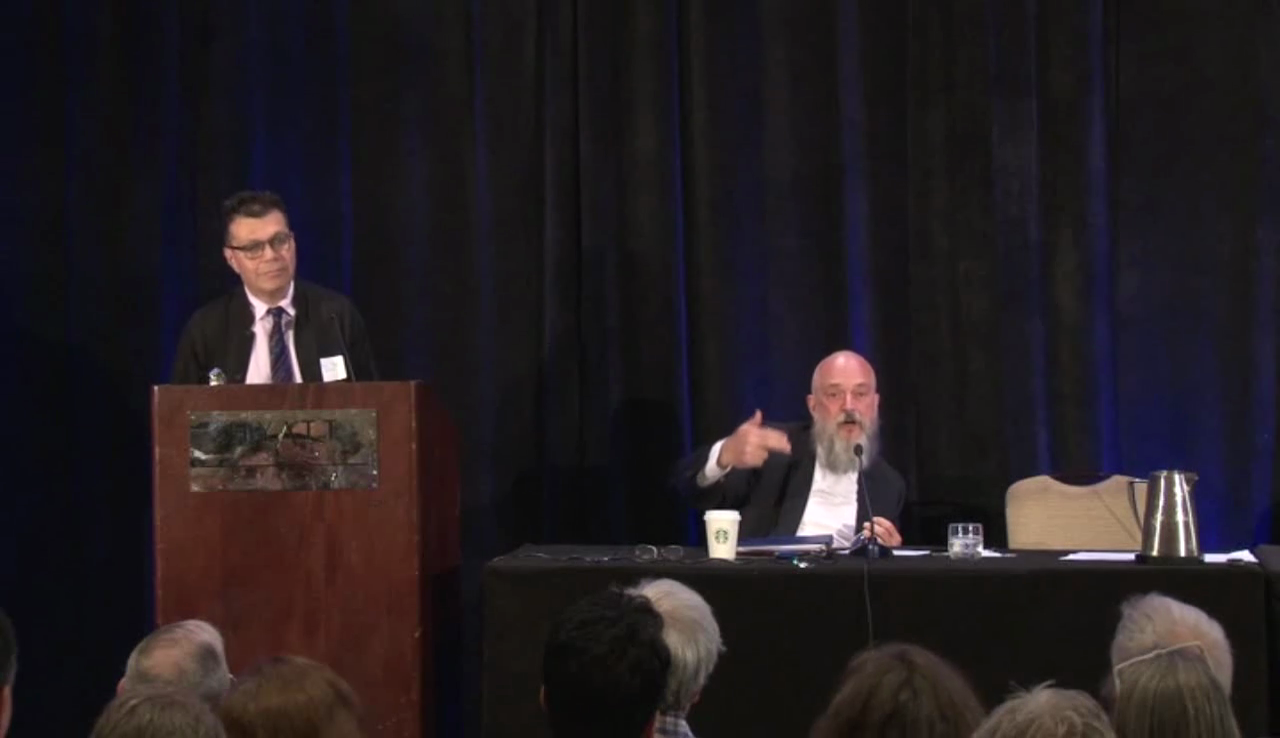 Fresh out of law school and looking every bit the hippie type, Lopez and Hardway spent 18 months at Langley. At one point, they were even supplied with an office there. They were not allowed to photocopy any documents, only take notes, and these had to be verified by a baby sitter who monitored their every move. Here is a sample of the form required by the CIA whenever classified material was reviewed on their premises: 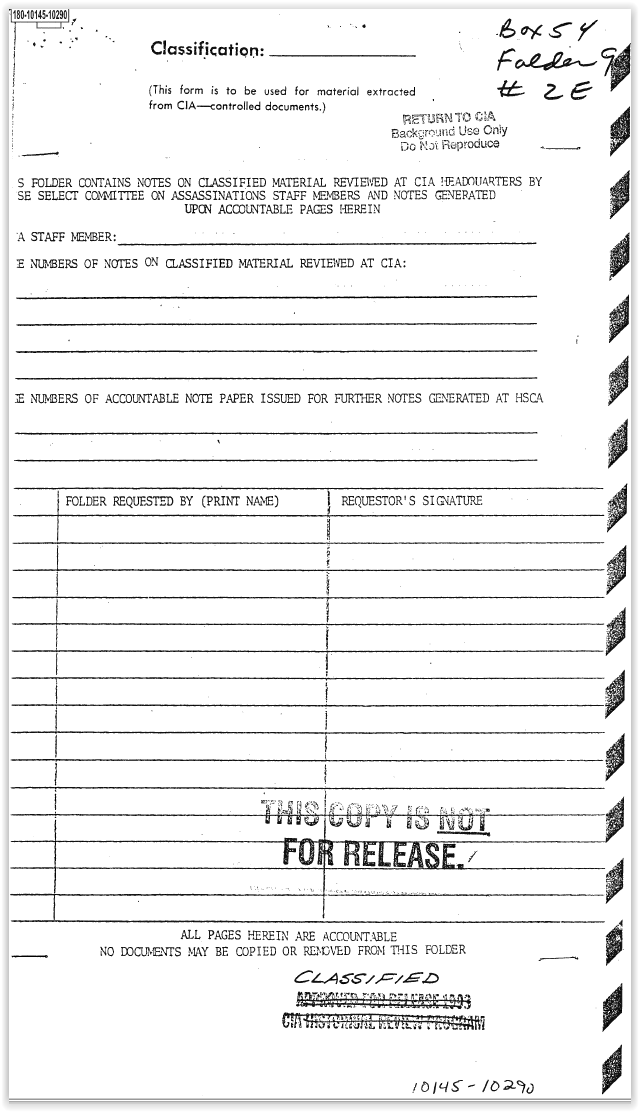 With a report containing 1,240 footnotes cited from primary source material, this has to be considered a staggering achievement, perhaps the most important in JFK research history. At one point, Hardway described how some documents were inadvertently produced by the CIA, which only served to whet their appetite for more information and investigation. They knew they were on to something.

Lopez and Hardway discovered documents that mentioned a CIA asset with the “crypt” LIRING-3 (pg 362).  “The Mexico City Station did not hear about the Oswald-Duran “affair” until July 1967 when a CIA asset, LIRING/3 reported it.” (footnote 863)  This is hard to believe, because the alleged Durán/Oswald affair was all over the Mexican newspapers at the time, as it was rumored that  a “confession” had been beaten out of Sylvia by the Mexican police.  One would assume the Mexico City Station monitored all media in Mexico. Here is the document: 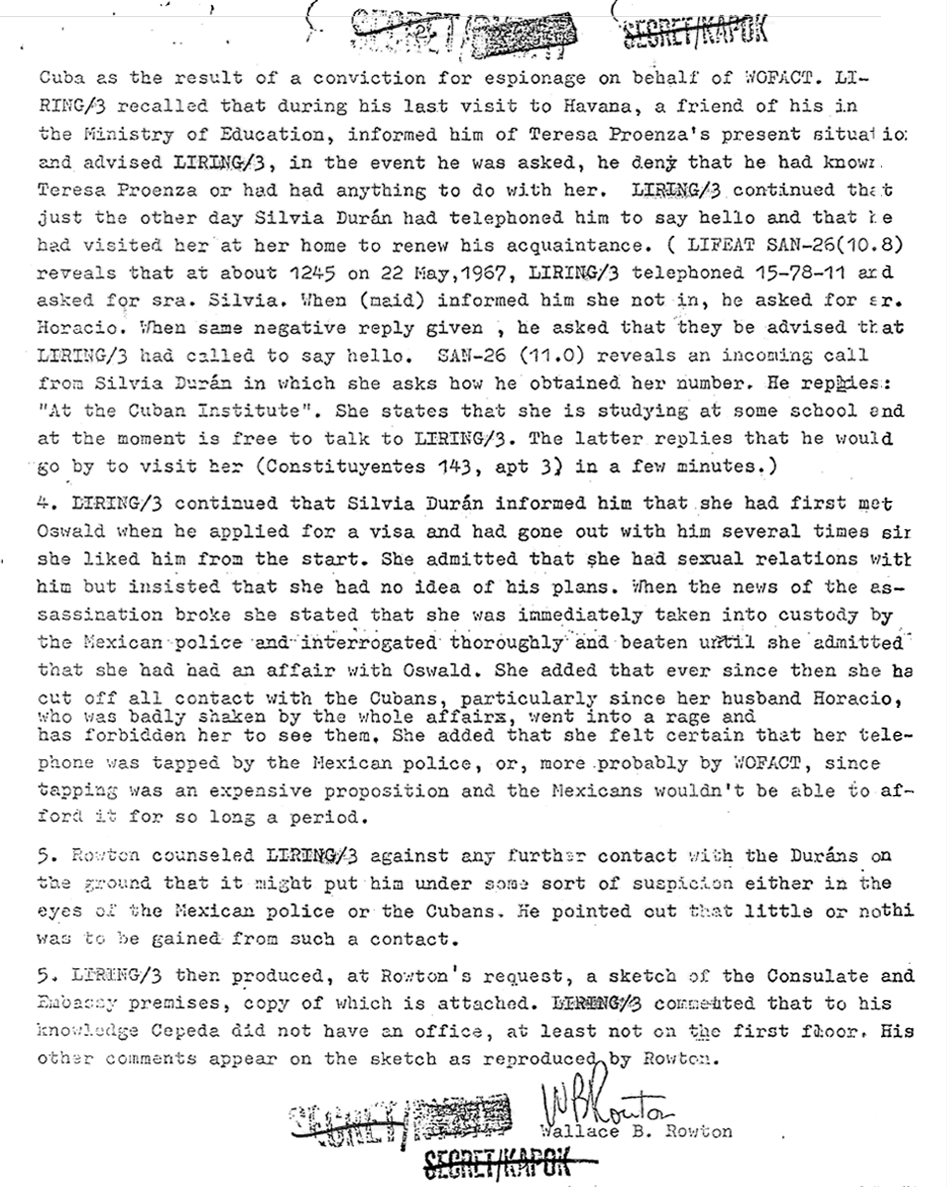 The allegations contained here are nothing but pure hearsay, and would  never be admitted in a court of law.  The net result, however, is that Rowton has thus inserted LIRING-3 into the JFK assassination saga.  His identity is Carlos Jurado Delmar and he deserves our utmost scrutiny, as well as his handler “Wallace B. Rowton”. 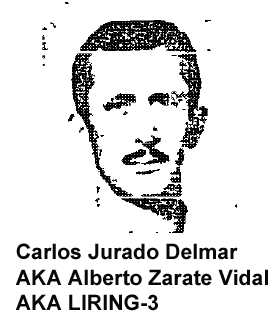 Jurado Delmar’s 201 file number was 201-798301, and his handler during most of his time as a CIA asset was one Wallace Rowton, an obvious pseudonym. According to the new documents, Jurado was born in Mexico City, and came from a middle class family. Here is Rowton’s bio report on LIRING-3: 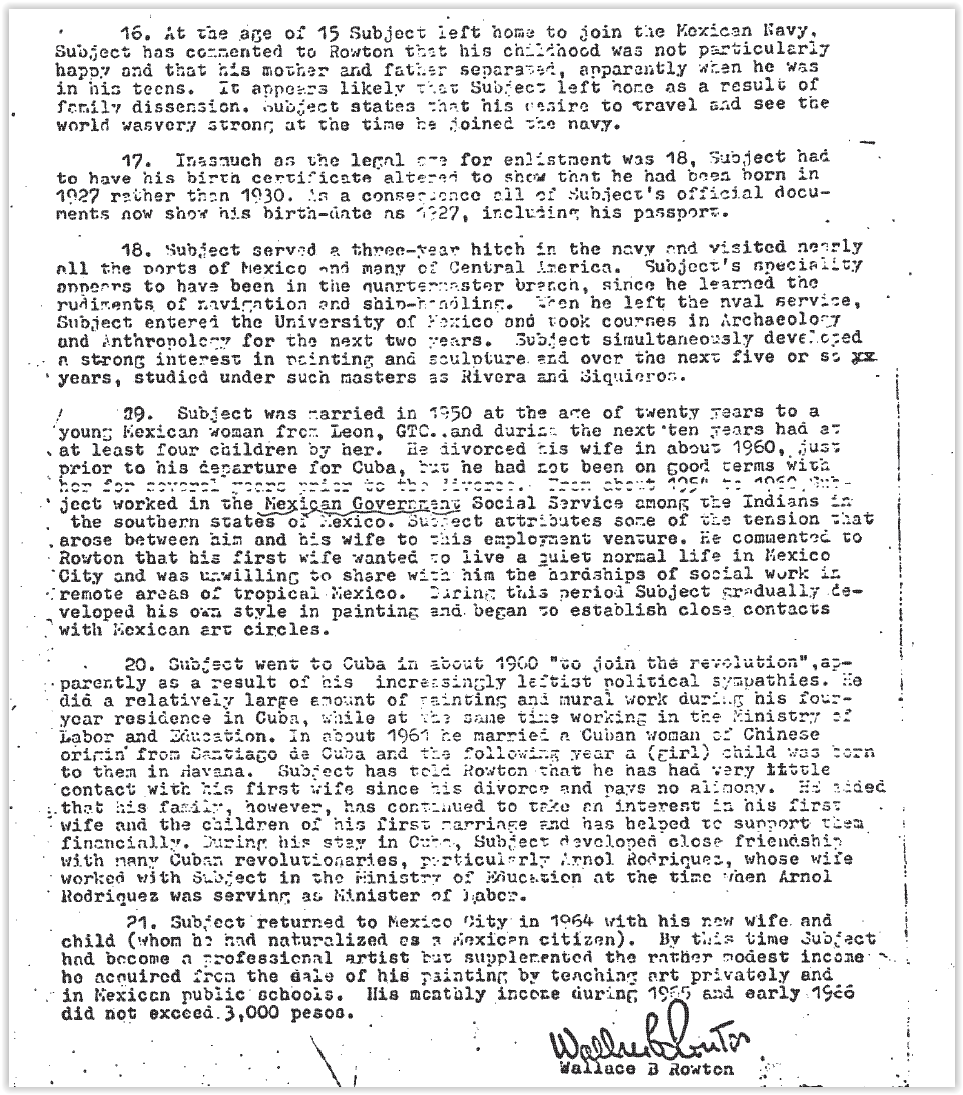 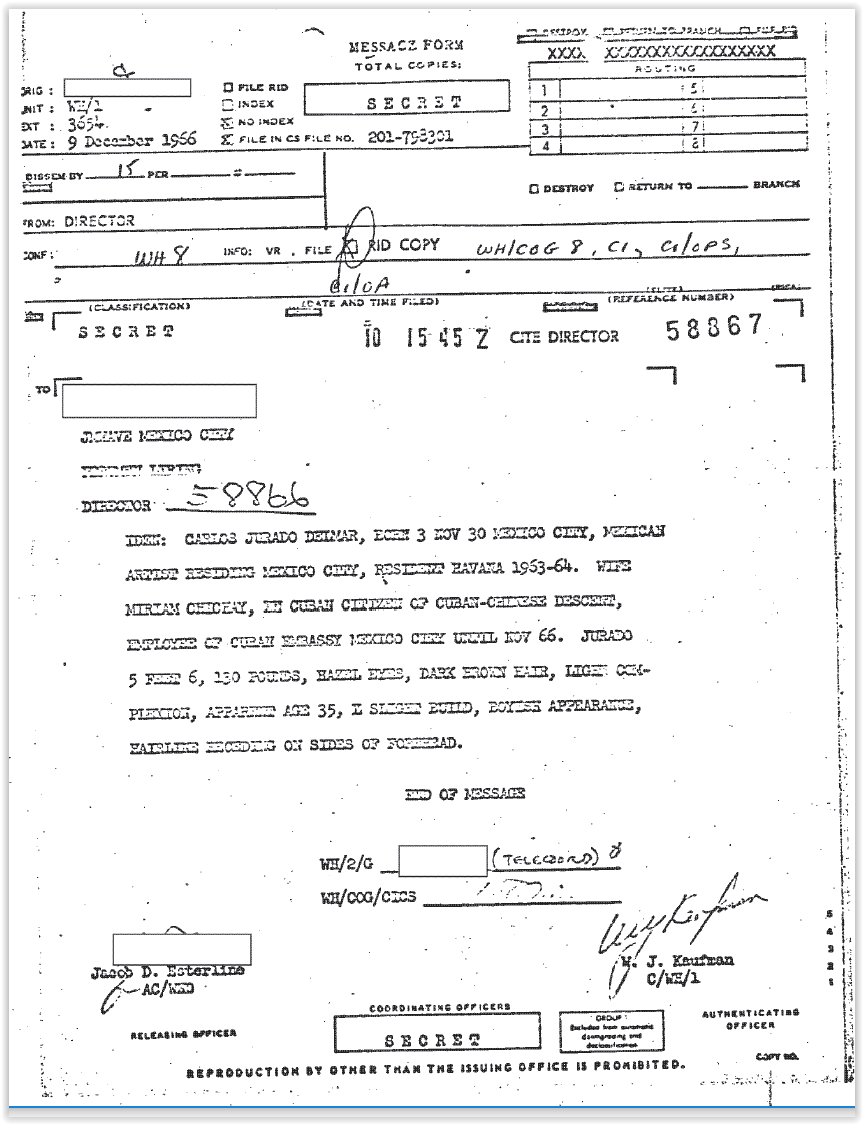 So, what exactly was the LIRING project?  The latest release of documents offer a trove of information on LIRING-3, in fact, so much that it could redefine what happened in Mexico City. 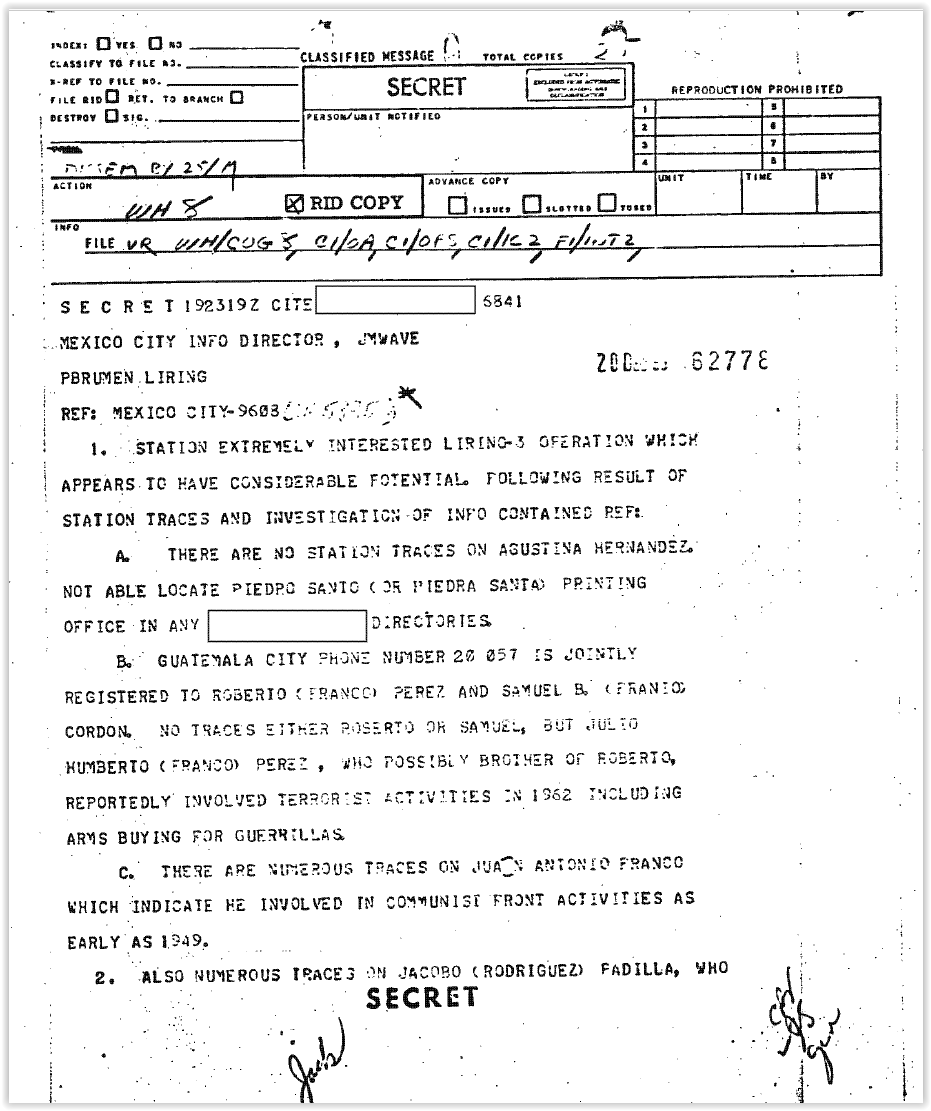 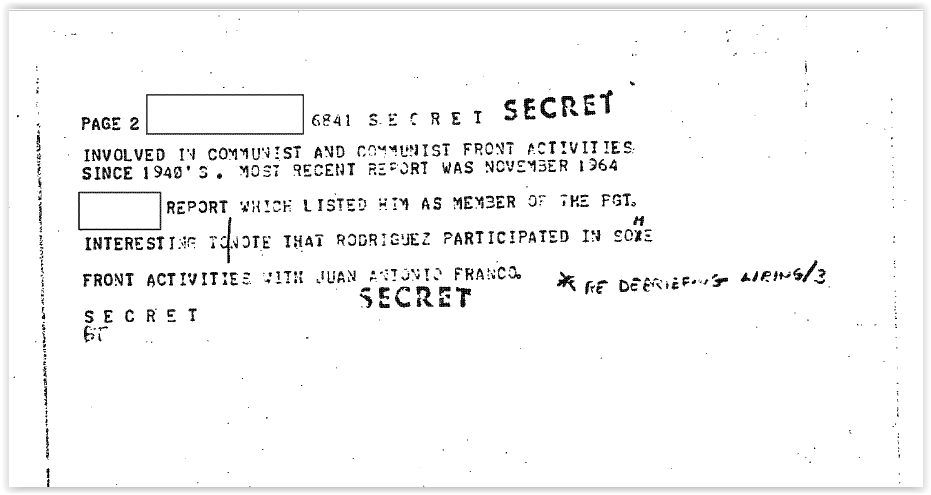 According to the new documents released, the LIRING project was an operation that recruited Mexican nationals to infiltrate and disrupt Communist/Socialist organizations in Central and South America (the old “domino” theory).   One of these organizations, of keen interest to the CIA, was the FAR, Fuerzas Armadas Rebeldes in Guatemala, which promoted the Marxist-Leninist philosophies and threatened to follow in the footsteps of the Cuban Revolution. 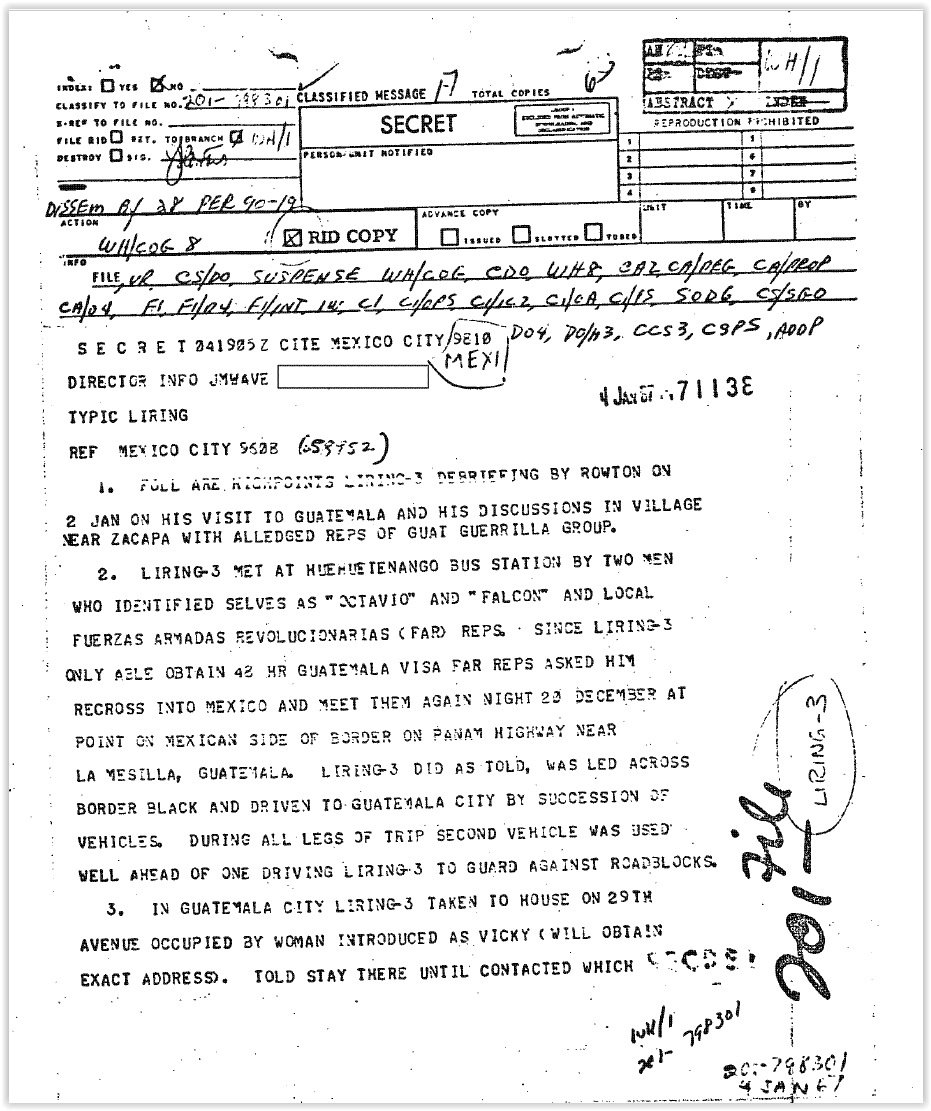 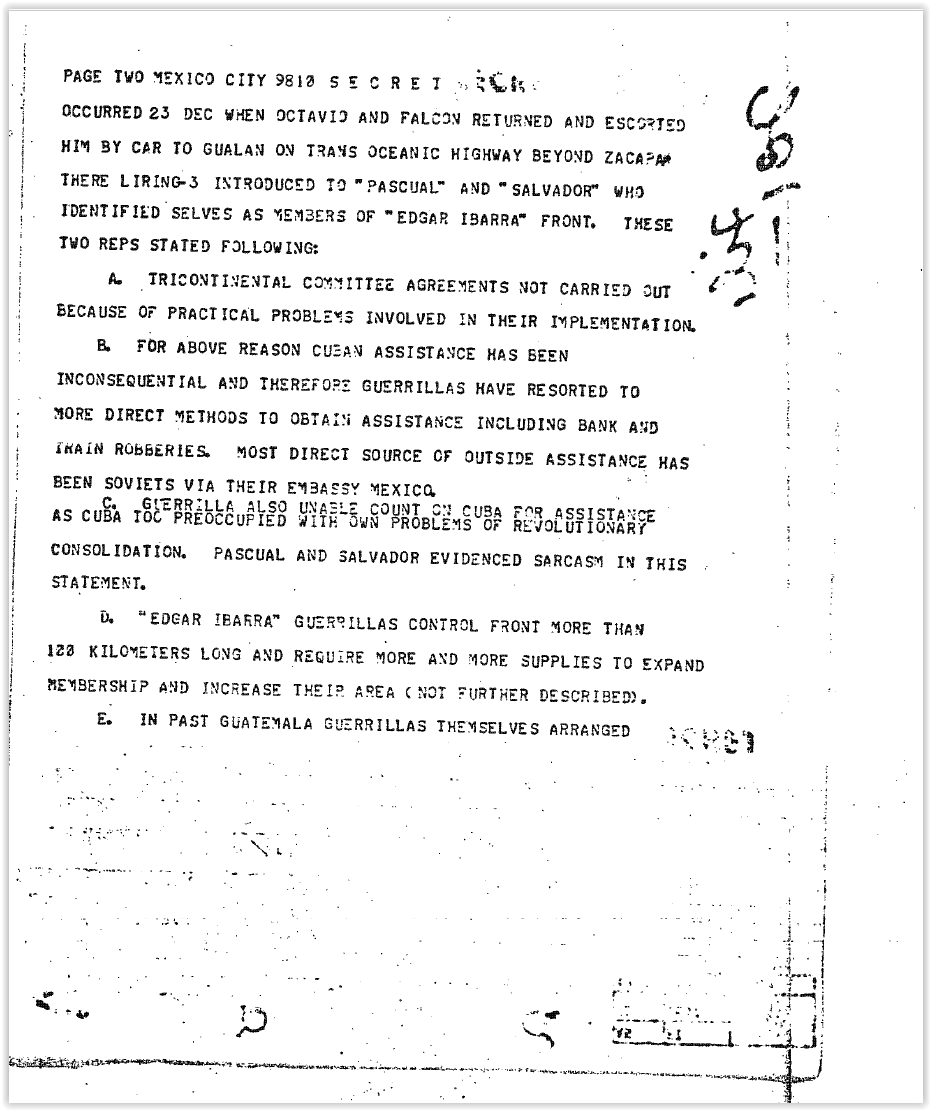 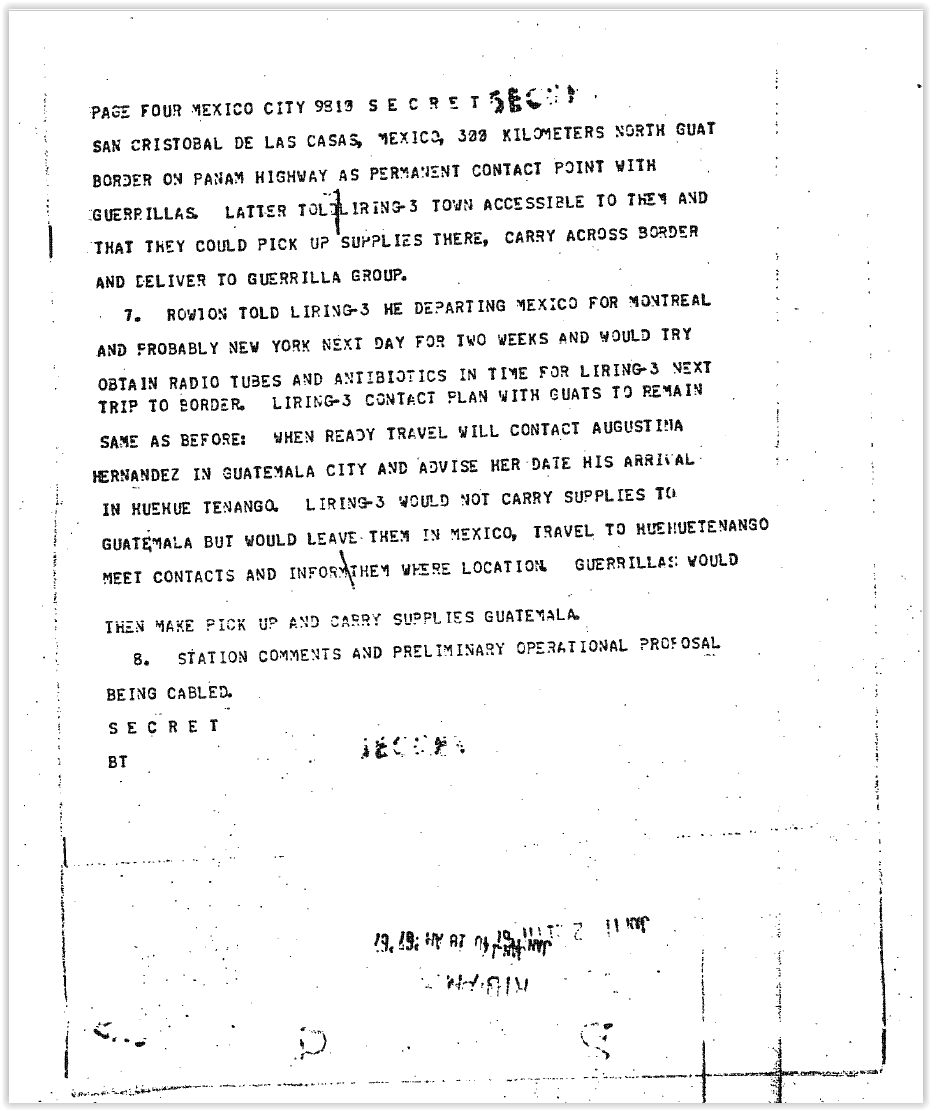 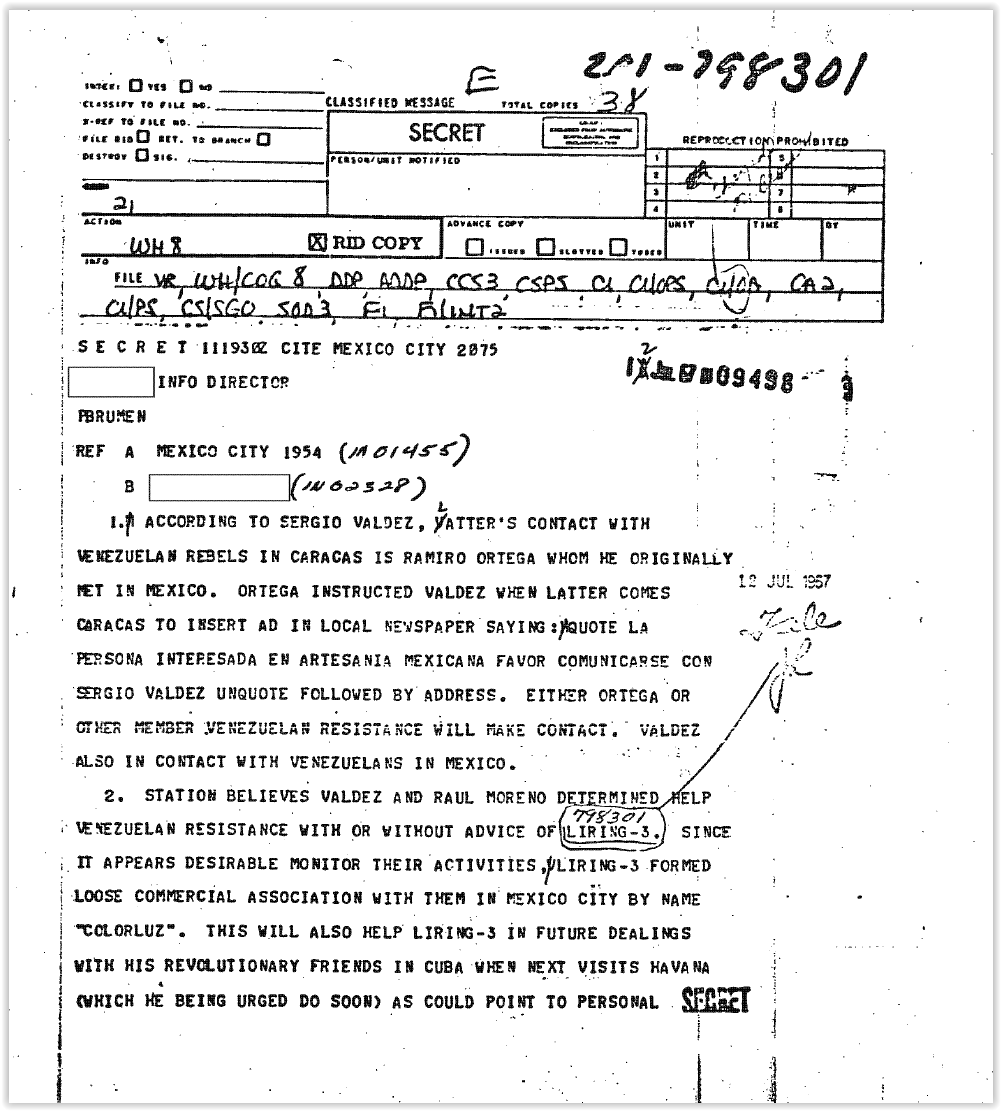 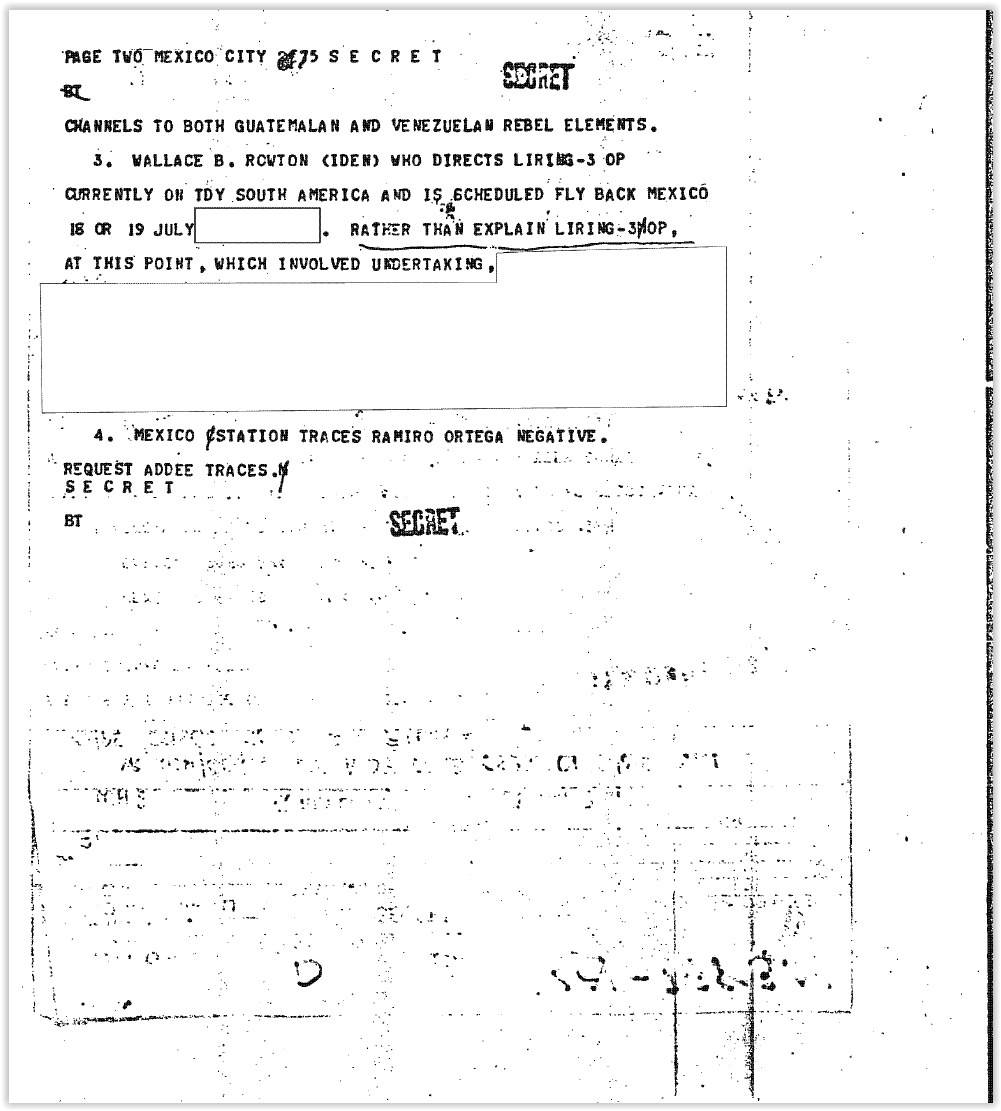 The most important goal of the operation, however, was to travel back and  forth between Mexico and  Cuba for the purpose of gathering all kinds of intelligence for the CIA: 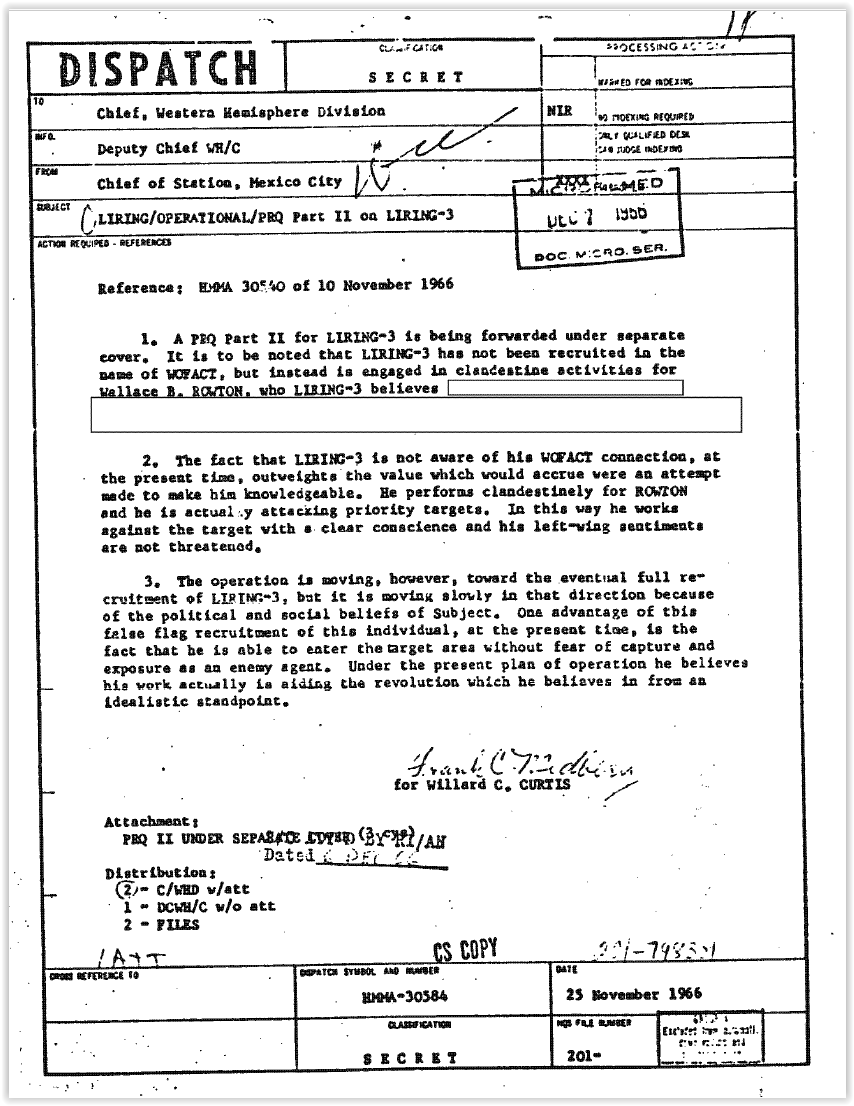 Notice above the introduction of a new crypt: “WOFACT” which means “CIA” 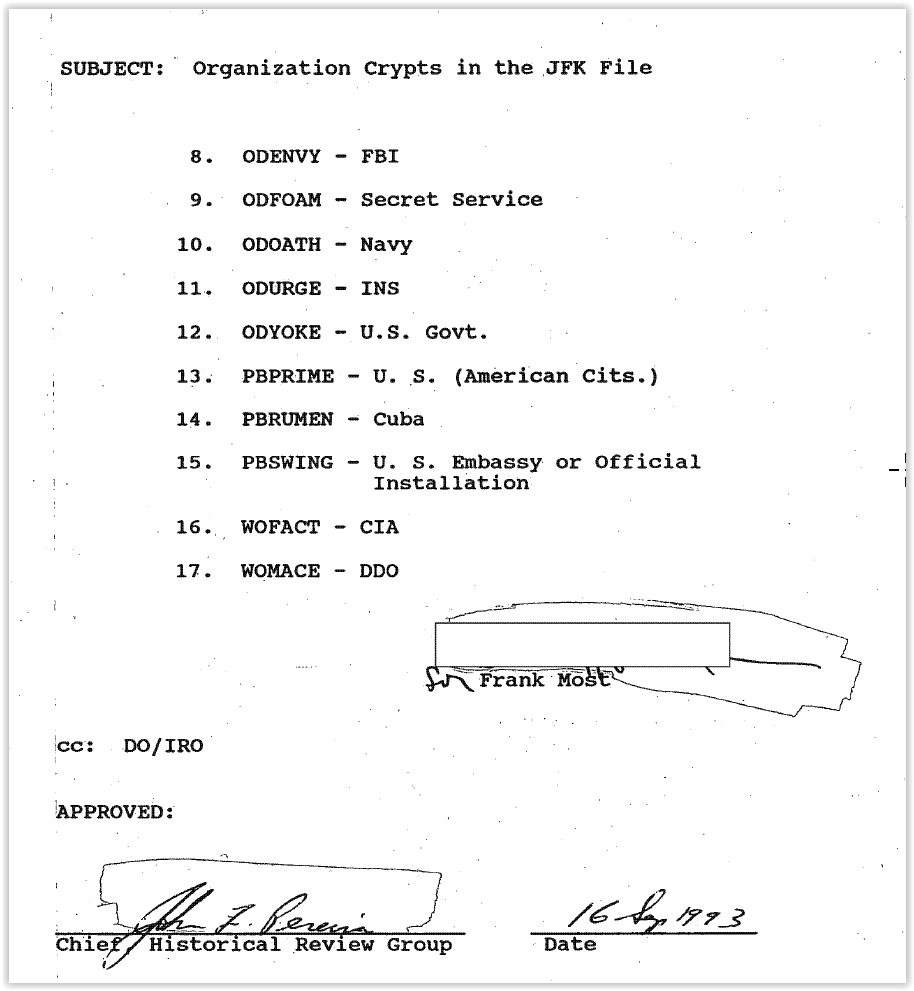 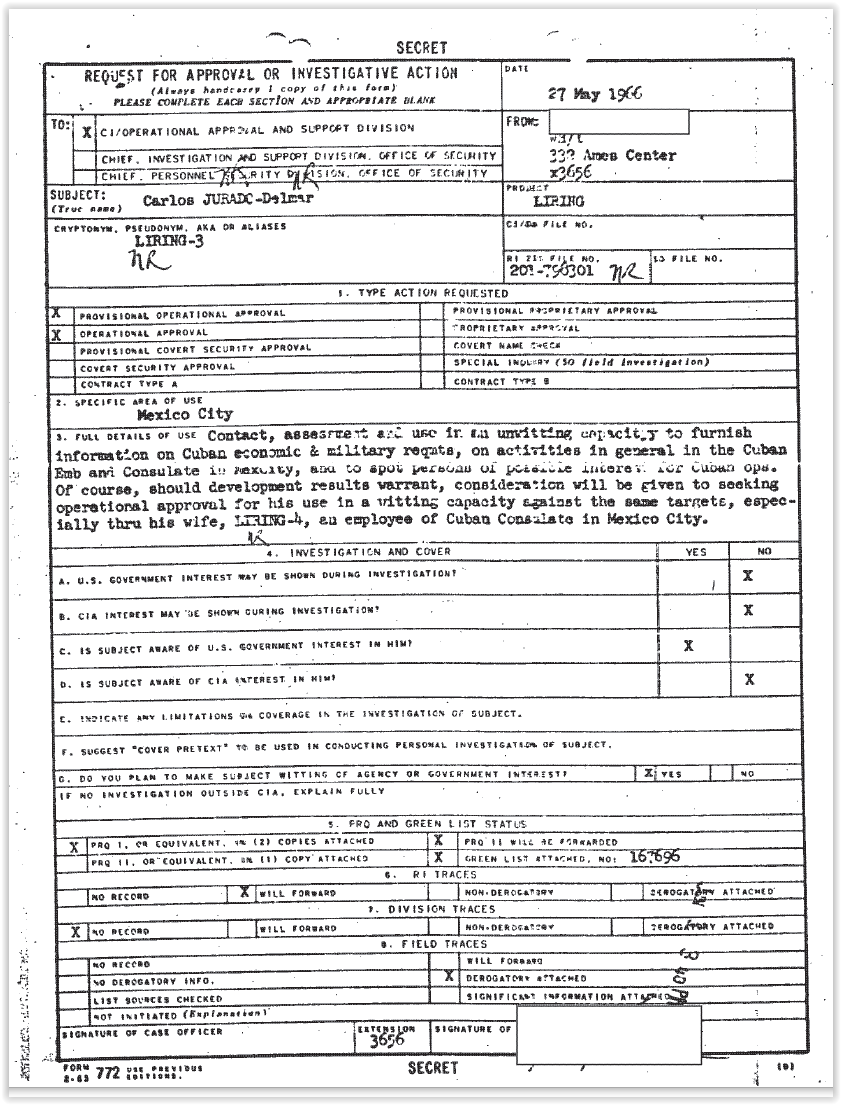 Here is a typical Havana report: 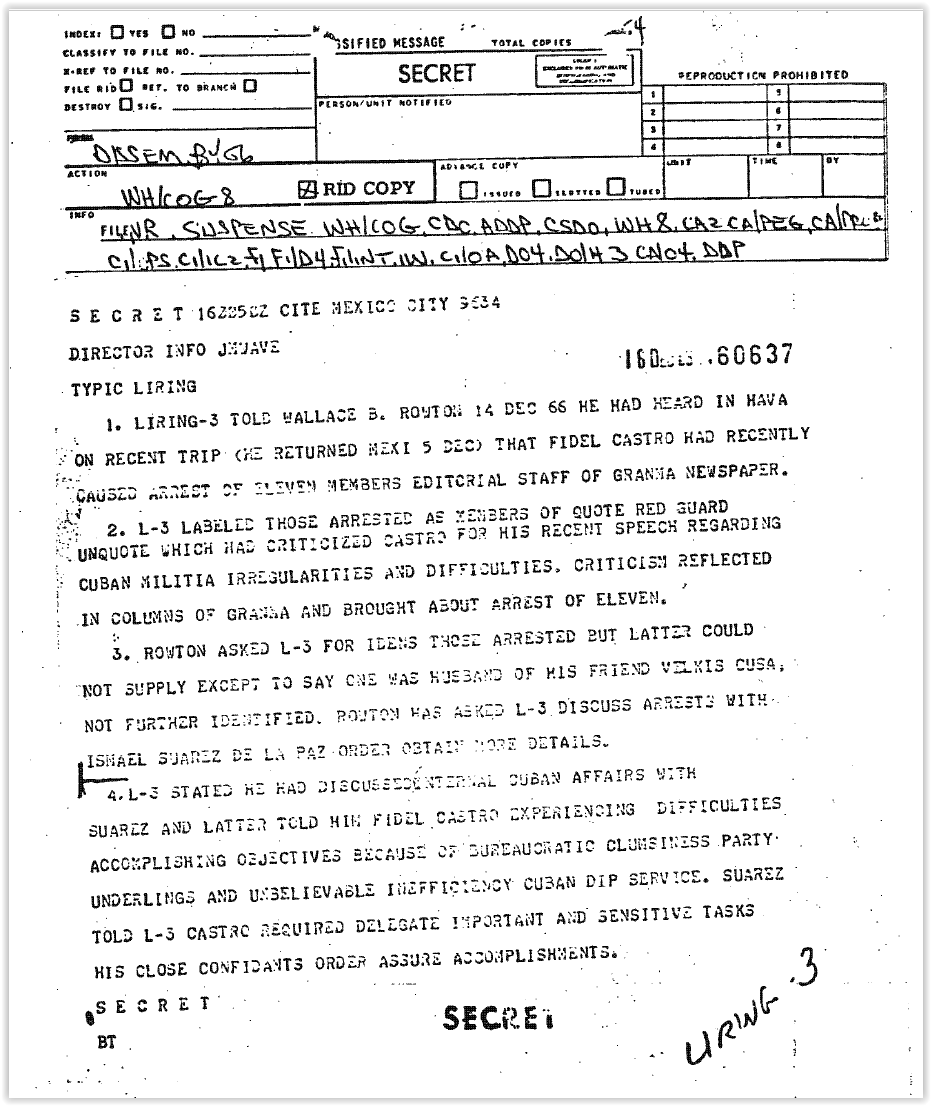 The Jurado-Rowton relationship is only now being studied in depth, and some of the revelations offer an intimate view of  asset-handler interaction on a day-to-day basis. A prime example  of the control exerted by the CIA over Jurado Delmar can be seen in this forged driver’s license obtained by Jurado Delmar in the state of Coahuila, with the intervention of a corrupt judge, who was also “helping him obtain a false passport”: 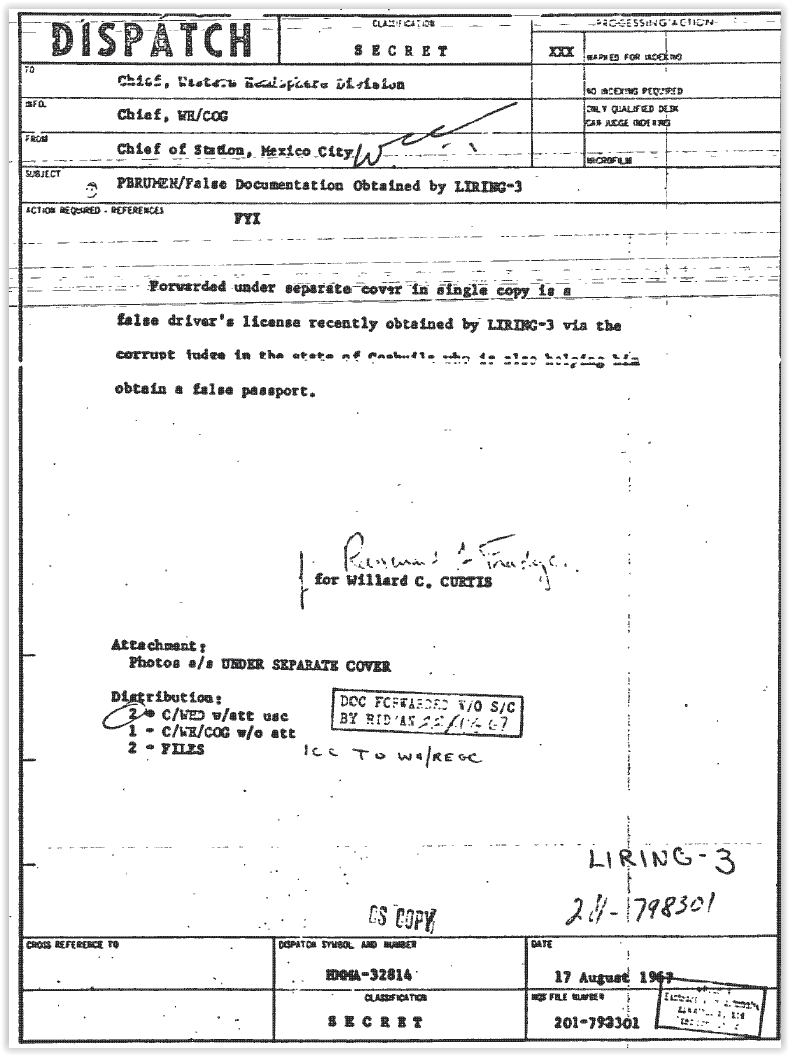 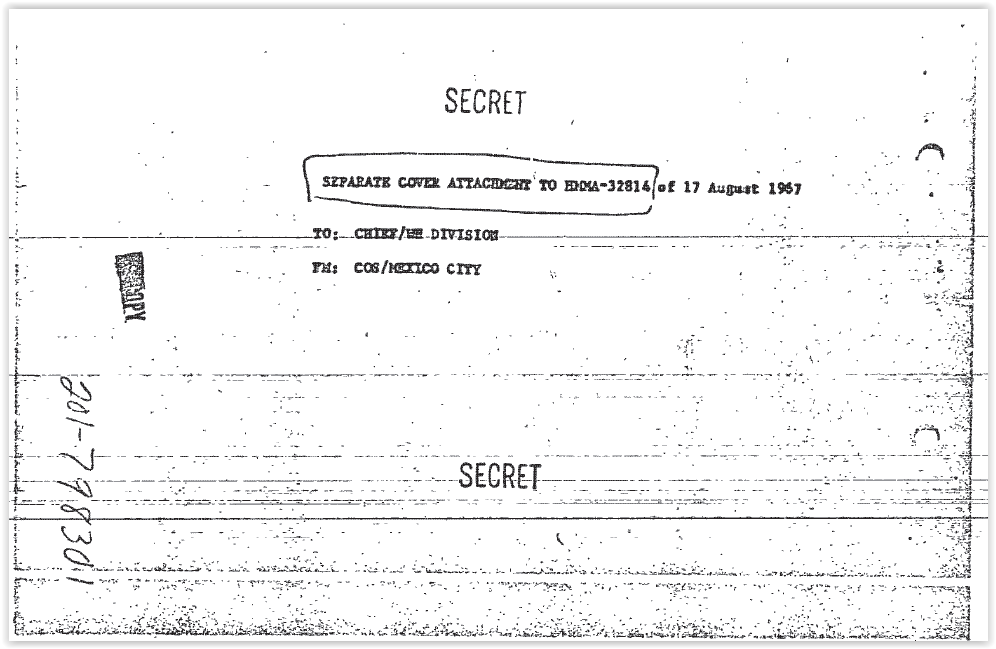 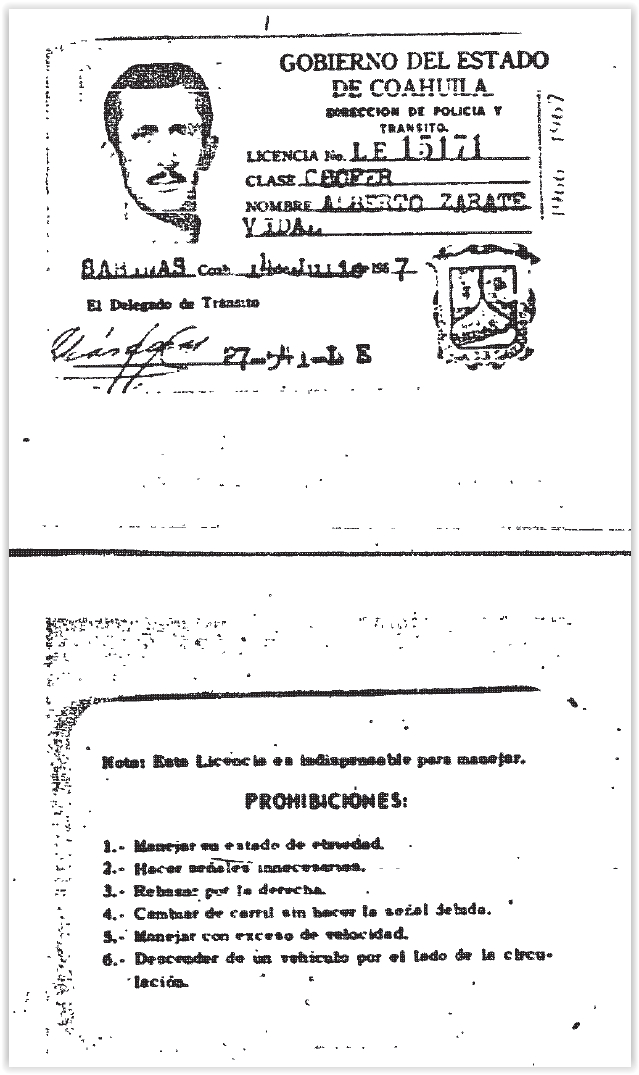 This passage extracted from an evaluation of LIRING-3 was written by Rowton himself in 1969. Rowton, by the way, refers to himself in the 3rd person:

The following is extremely relevant, because it reveals how far Jurado Delmar AKA LIRING-3, would go to please his masters:

“Subject has shown no reluctance to exploit his friends, and even his wife, to be of specific service to Rowton and has, on numerous occasions, volunteered to do so with Rowtons’s approval.”

Could it be possible that his remarks regarding the supposed Sylvia Durán/Lee Oswald affair was an assignment given to LIRING-3 by Wallace Rowton? If so, why did Rowton wait four years after the assassination to defame, smear, and slander Durán’s character? In fact, with Rowton in complete control of all reports on LIRING-3 contact, did he even have to consult him to drop that into his report?

Rowton had arranged to rent an apartment which would be used as a safe house for LIRING-3 clandestine meetings.  Instead, Jurado began using this apartment to bring in women for sexual escapades, a fact that was confirmed by electronic surveillance of the apartment. According to Rowton, this could also be used to blackmail Jurado: 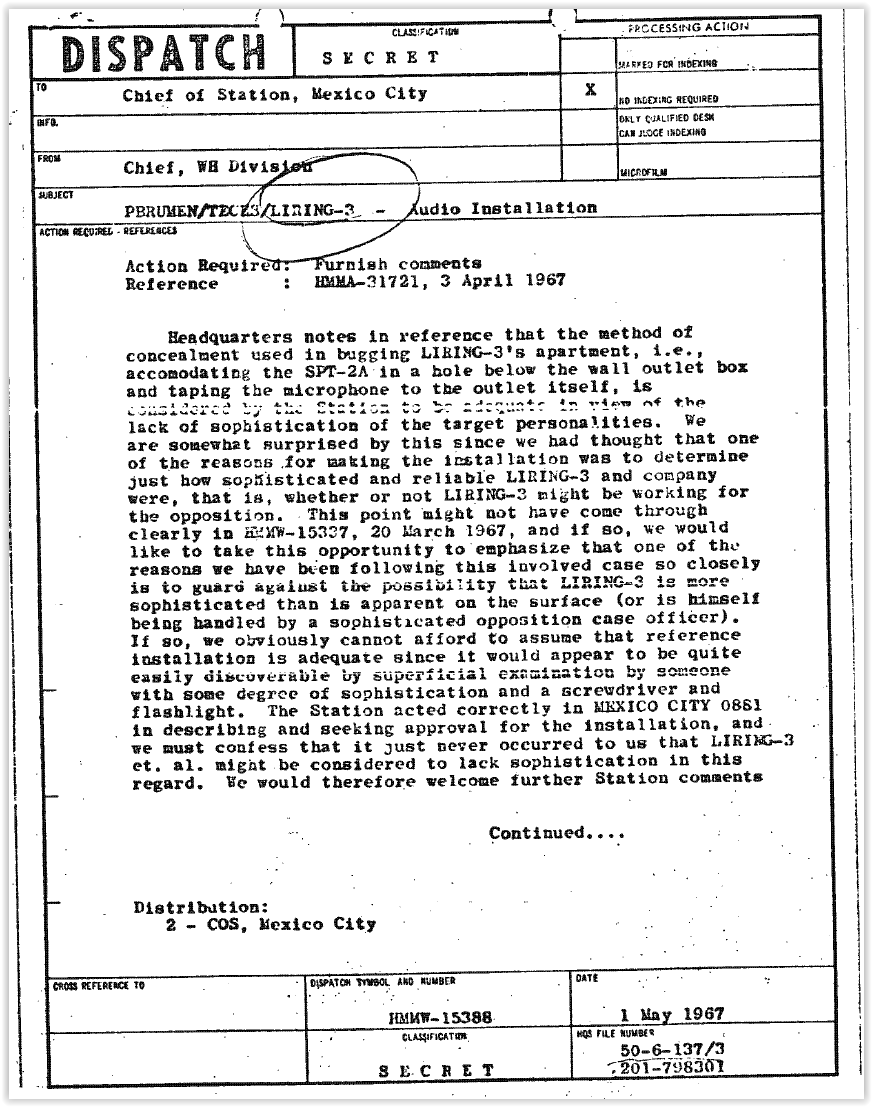 This one shows the extreme distrust of the Chief of Station, Mexico City, one Mr. Willard C. Curtis, regarding the LIRING-3 affair. The reason for bugging Jurado Delmar’s safe house was entirely due to their fear of Jurado being a double agent: 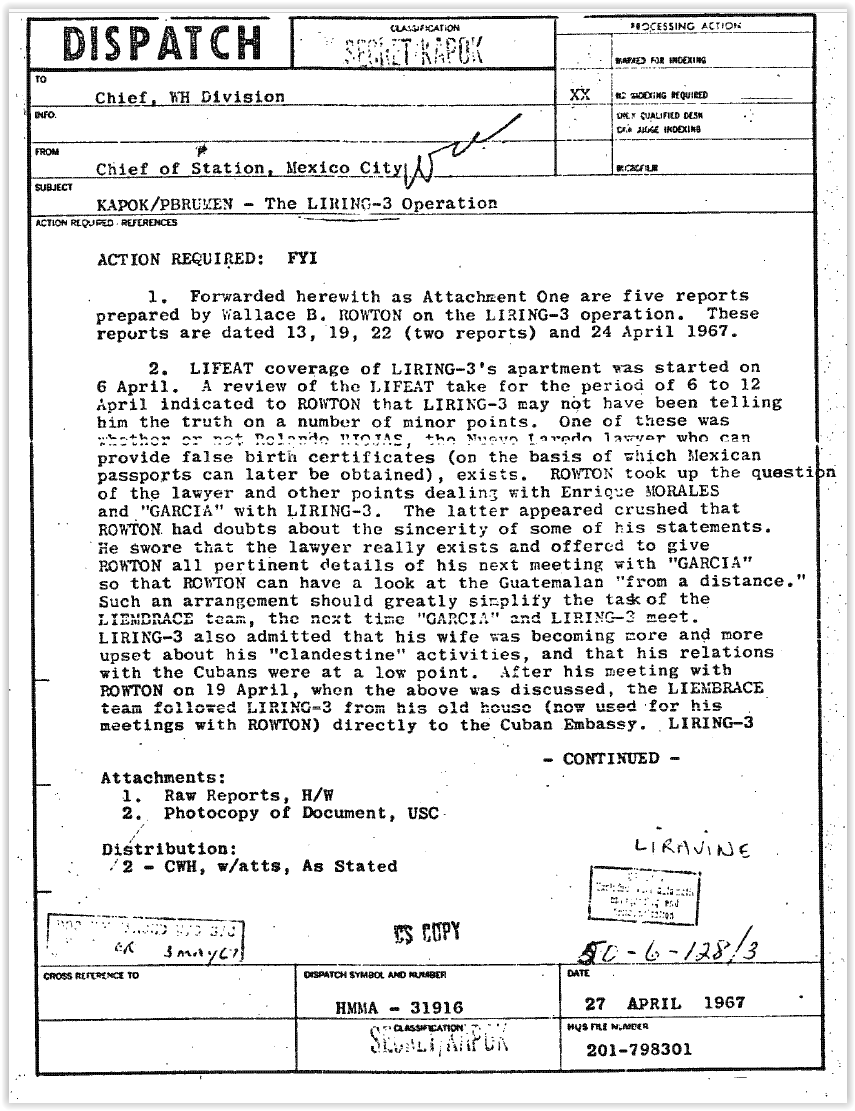 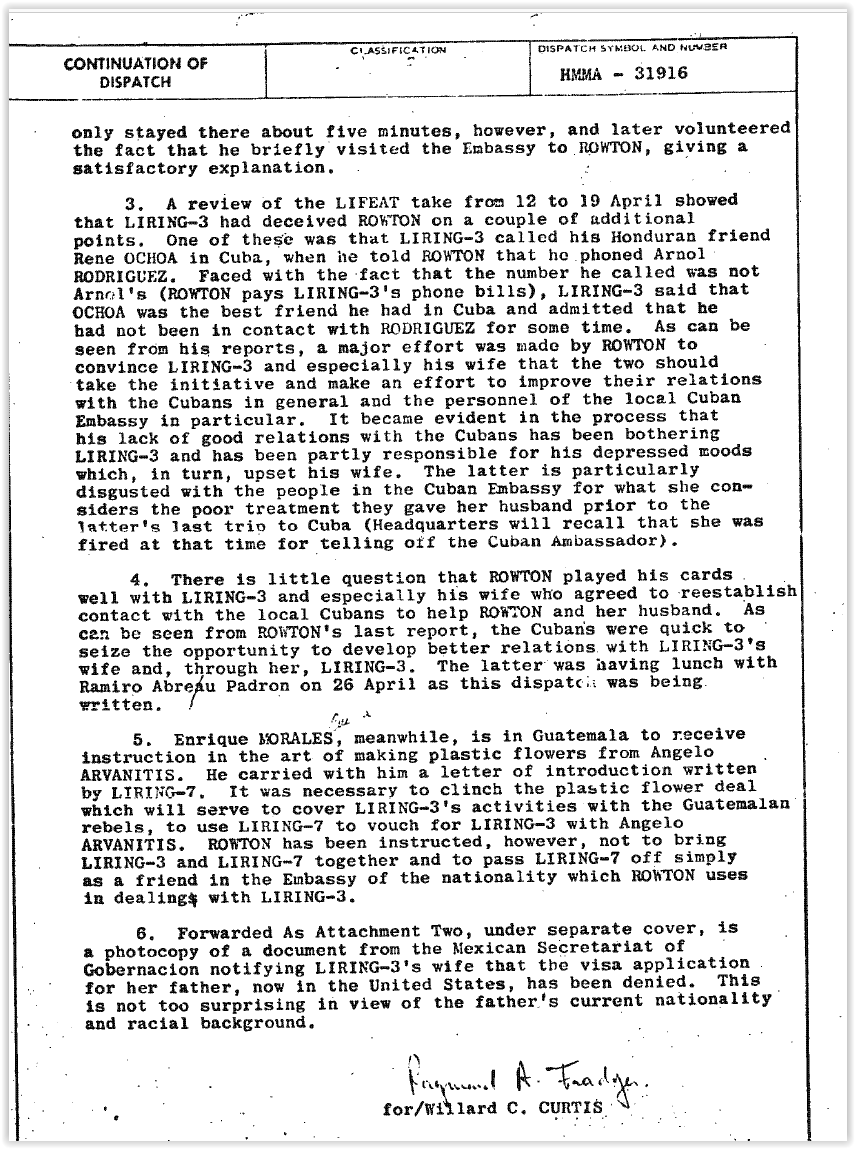 The next document shows information contained in a memo,  again, written by “Chief of Station” in Mexico City, Willard C. Curtis.  At first glance, one would say – Aha! There’s your smoking gun! – documented proof that Sylvia Durán slept around with many different men: 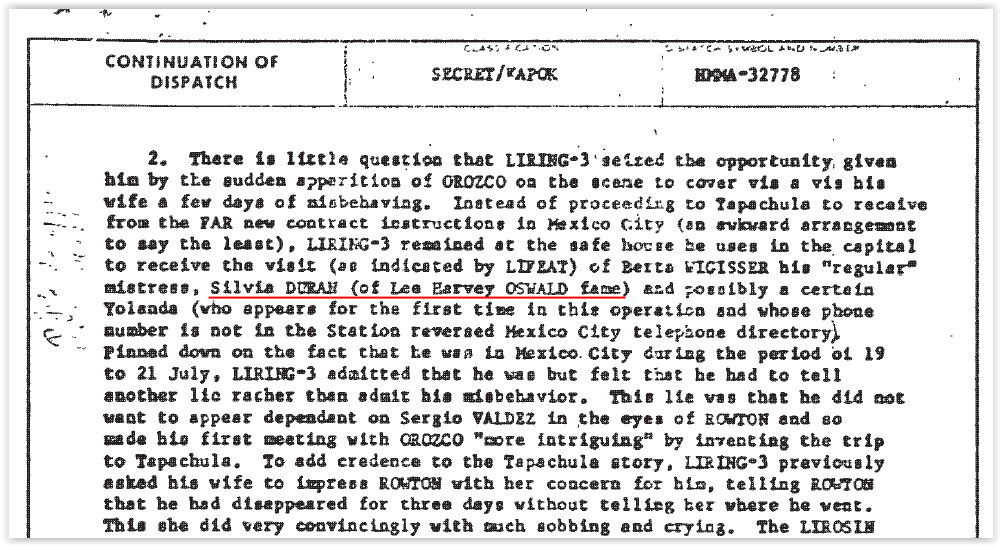 If Carlos Jurado Delmar’s (LIRING-3) safe house apartment was bugged and under surveillance, would it not have behooved his handlers to make sure photographs or tape recordings were preserved to document Durán’s promiscuity? The documents cited above show a high degree of sophistication in the art of electronic surveillance. Where is Sylvia??

The report is not signed by Curtis, but by a surrogate, one “Raymond A. Fadger” (could be Fudger). 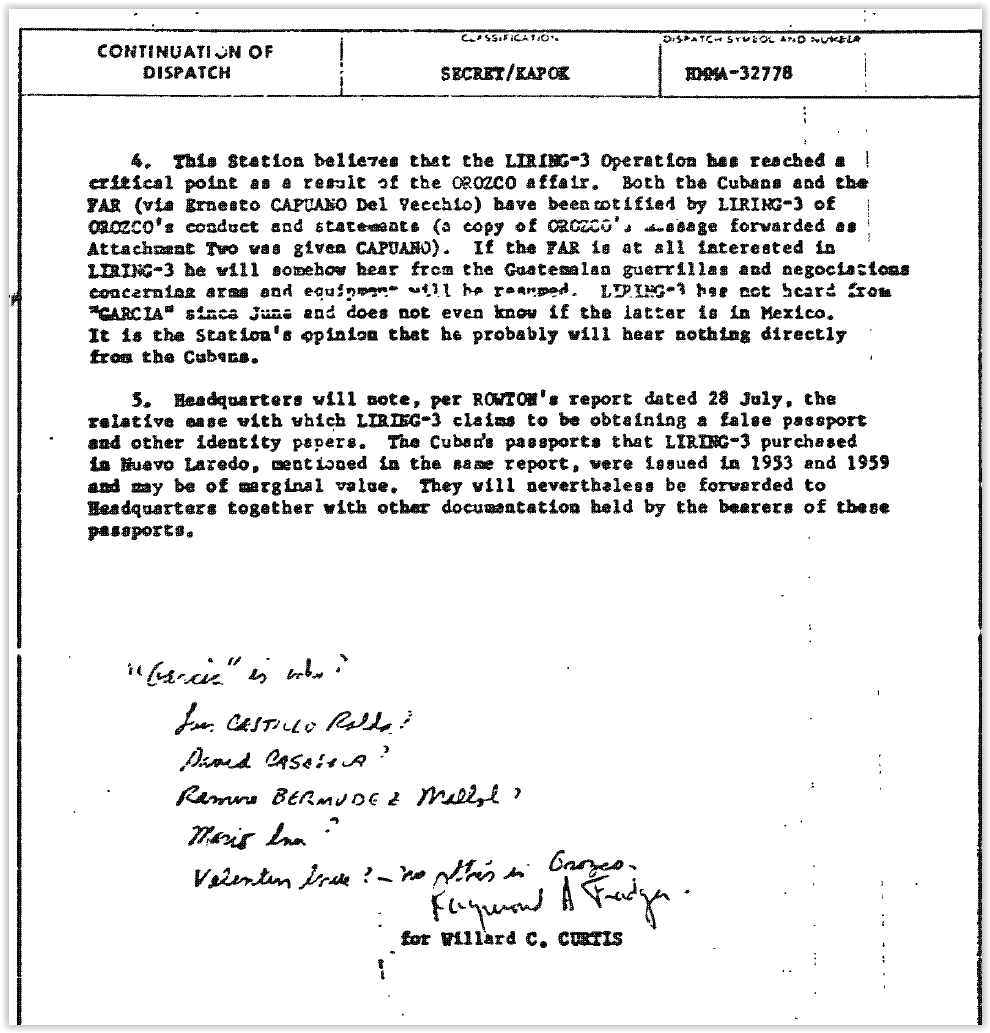 And who did the pseudonym  Willard C. Curtis belong to? According to Jefferson Morley, and reported by John Newman and Bill Simpich at AARCLibrary.com, he is none other than Winston Scott!

The compartmentalization and separation is obvious here, not to mention plausible deniability. This report  clearly was intended to provide more documented “proof” that Sylvia Durán was a whore. Some might argue and speculate that Durán was an agent who used sex as a means of obtaining information. This, however, has never been proven. The inclusion of the phrase “of Lee Harvey Oswald fame”, was intended to support LIRING-3’s allegations covered  in the original document  which started this post.  It is obvious that Winston Scott, CIA Mexico City Station Chief, refused to stick out his neck in support of the Durán-Oswald alleged affair, refusing to sign this report, even in the name of his pseudonym, Willard C. Curtis.