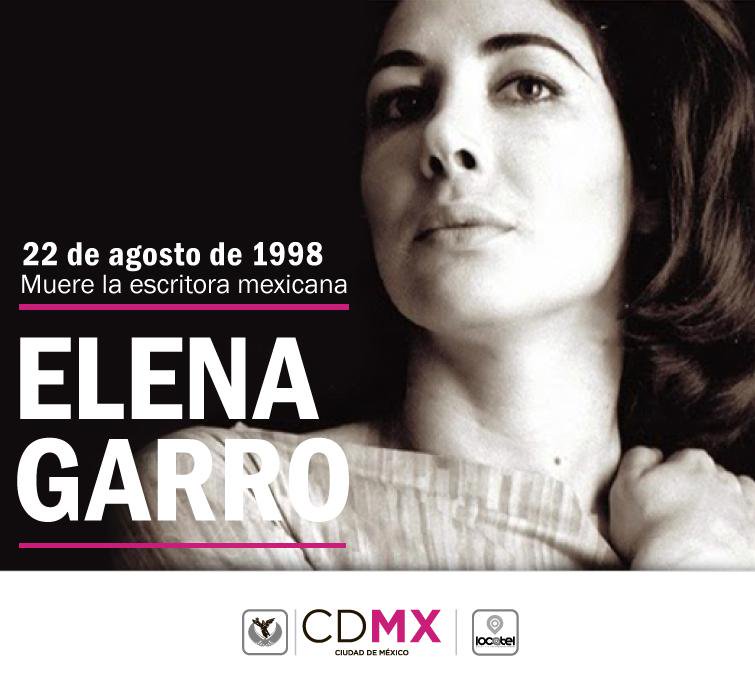 In my first LIRING-3 (Carlos Jurado Delmar) blog post, I wrote that Elena Garro de Paz deserved a post all to herself, due to her involvement in the Sylvia Durán affair. 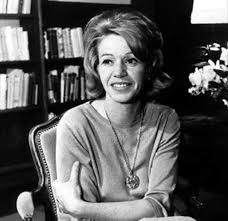 While perusing the latest ARRB document release dated 04/17/18, I have found a heretofore  unredacted and unreleased, very important document cited by the Lopez (and Hardway) Report  – it will be discussed at the end of this article.  As previously noted, the Lopez Report is truly a gargantuan accomplishment, given the extreme surveillance Dan and Eddy were under, while trying to extricate and interpret documents at Langley for the HSCA.  The reader will recall that they were not allowed to photocopy documents, only take notes, and  even these were inspected by babysitters before Lopez and Hardway were allowed to leave the premises. Here is a sample of these notes: 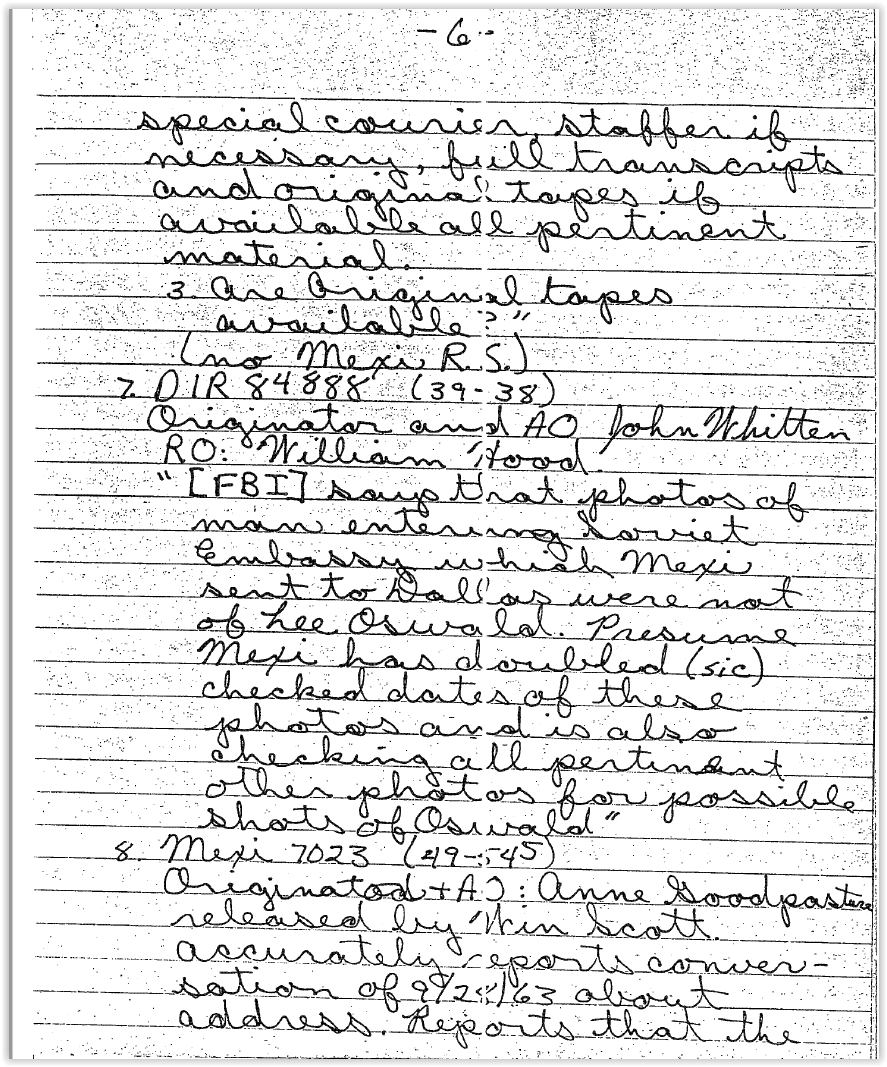 Elena Garro de Paz (1916-1998), was one of the most popular and enigmatic Mexican journalists, novelists, playwrights, and poets of her time. She married Literary Nobel Laureate Octavio Paz in 1937, with whom she maintained a love-hate relationship, and remained married to Paz until their divorce in 1959.

Due to her incendiary articles, many in Mexico still blame her for supposedly instigating the Tlatelolco massacre of 1968 , which is considered one of the worst modern day massacres ever.  Even today, the Mexican government refuses to release documents pertaining to the massacre on the grounds of “national security”. (sound famliar?)

Elena Garro de Paz was also the cousin of Sylvia Tirado de Durán’s husband, Horacio Durán, as well as his siblings Rubén, and Lydia Durán.  Rumor has it that she hated Sylvia.  The Duráns were thoroughly worked over and intimidated by Mexican authorities after the assassination, in fact, Sylvia wrote in her personal account, that Horacio’s jaw was dislocated as a result of the beating he received.

So how is Garro de Paz inserted into the JFK assassination saga?

Besides the LIRING-3 fiasco as the source of a supposed Durán-Oswald love affair, Garro de Paz emerged as the second “corroborating” source of that supposed affair.  An extremely rare memorandum dated 12/25/65 about a meeting held on 12/10/65, authored by U.S. Embassy Political Officer Charles William Thomas, and cited in books and articles, especially in the Lopez Report, documented a supposed encounter that Garro de Paz had with a “Lee Harvey Oswald” at the time of Oswald’s supposed visit to Mexico City.  I briefly described this encounter at a party which was attended by three American “beatnick” looking fellas in the first LIRING-3 post, however, I did not show the actual memorandum because it was not at www.maryferrell.org – I found it at the Harold Weisberg Hood College JFK document repository, buried among other FBI documents.  Here is a portion it: 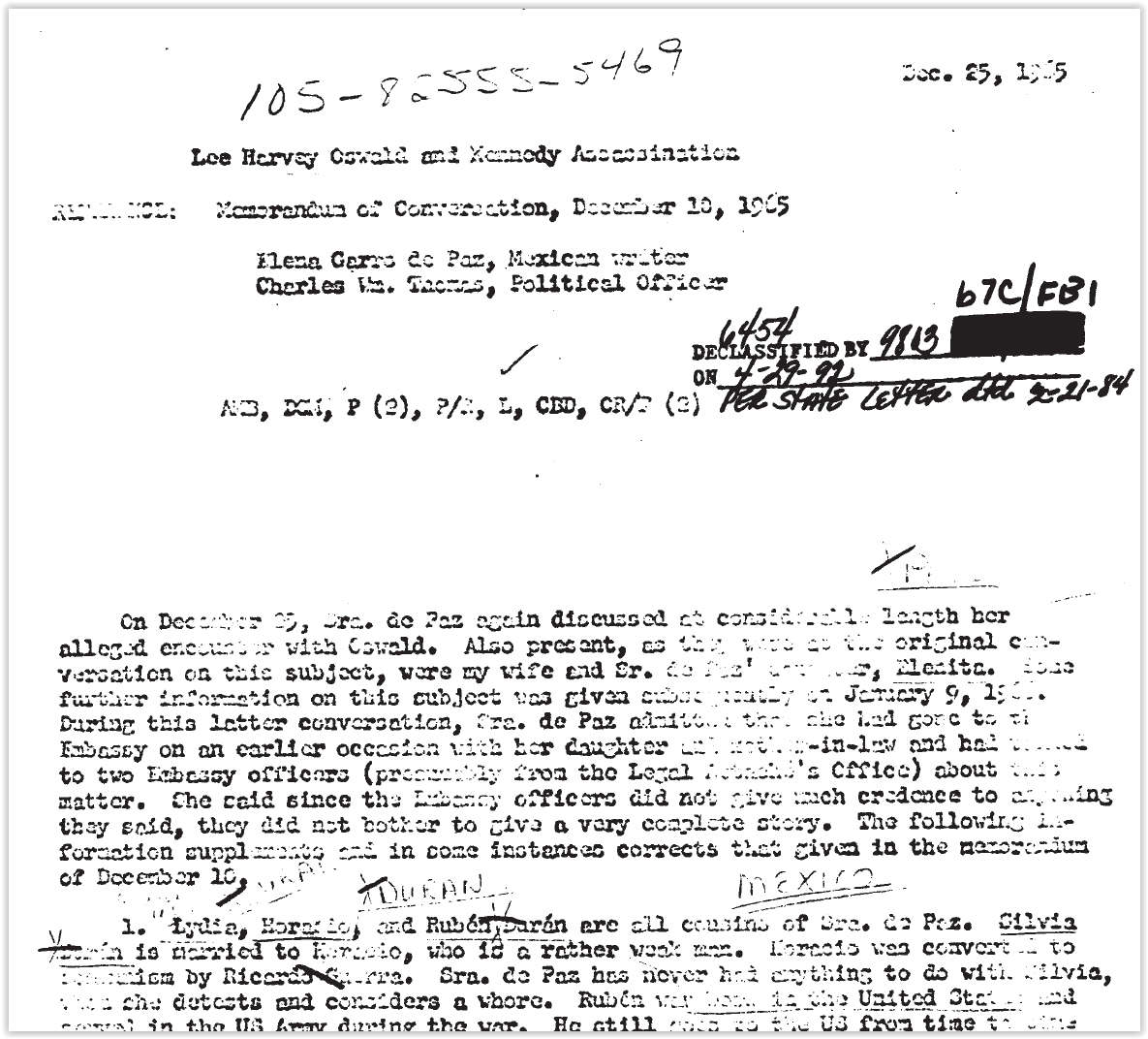 The memo also mentions how Garro de Paz, accompanied by her daughter Helena Paz, allegedly went into the Cuban Embassy gates on  Saturday, 23 November, 1963, making a spectacle of themselves by yelling “Fidel Asesino!!” among other barbarities and insults:

Memos cited in the Lopez Report

A Memorandum which has no way of being traced back to the author is known as a “blind memorandum”. That is how Lopez and Hardway describe these in the bibliography of their report. The Weisberg file shown above contains this additional document regarding Garro de Paz. It is from “Director” to “Legal Attaché”, Mexico City in response to cable of 12/17/65, also shown below. Notice at bottom left, how no one in the upper hierarchy of the FBI acknowledged receiving, much less reading the memo: 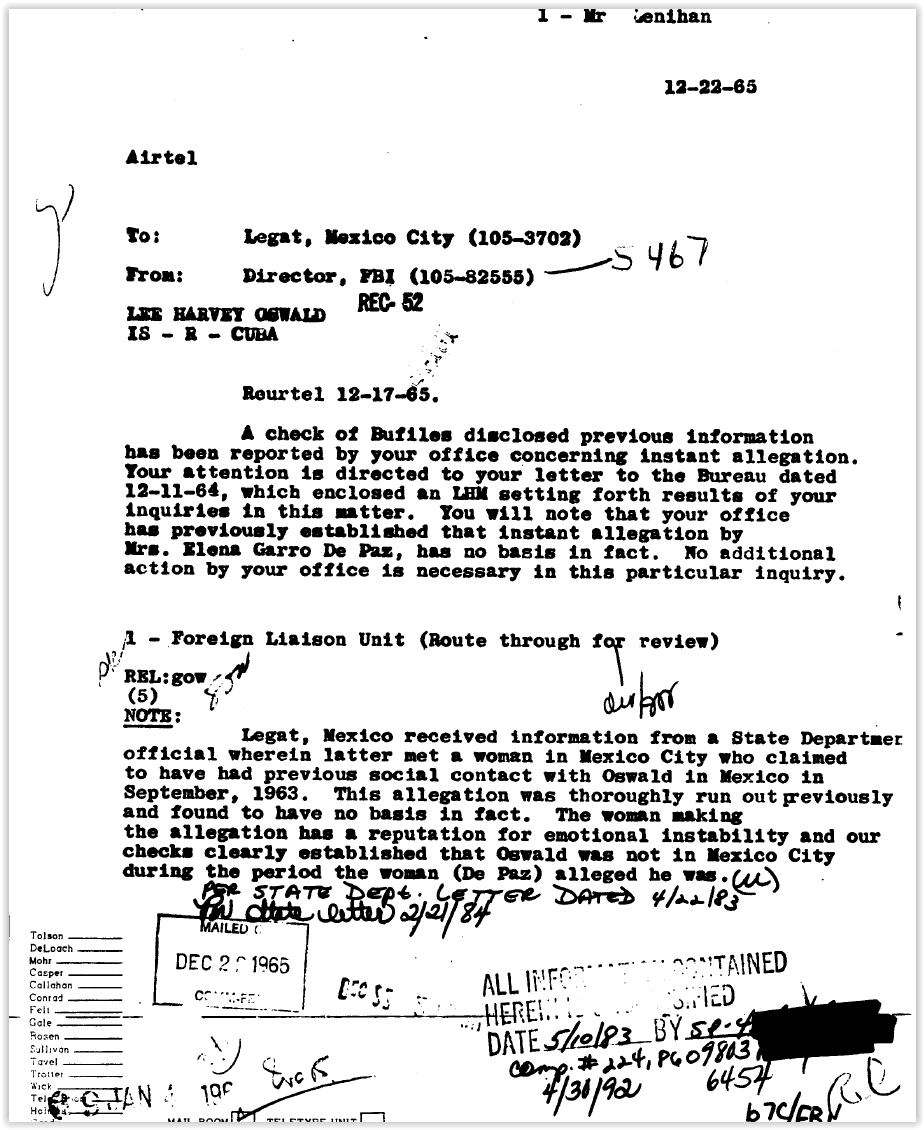 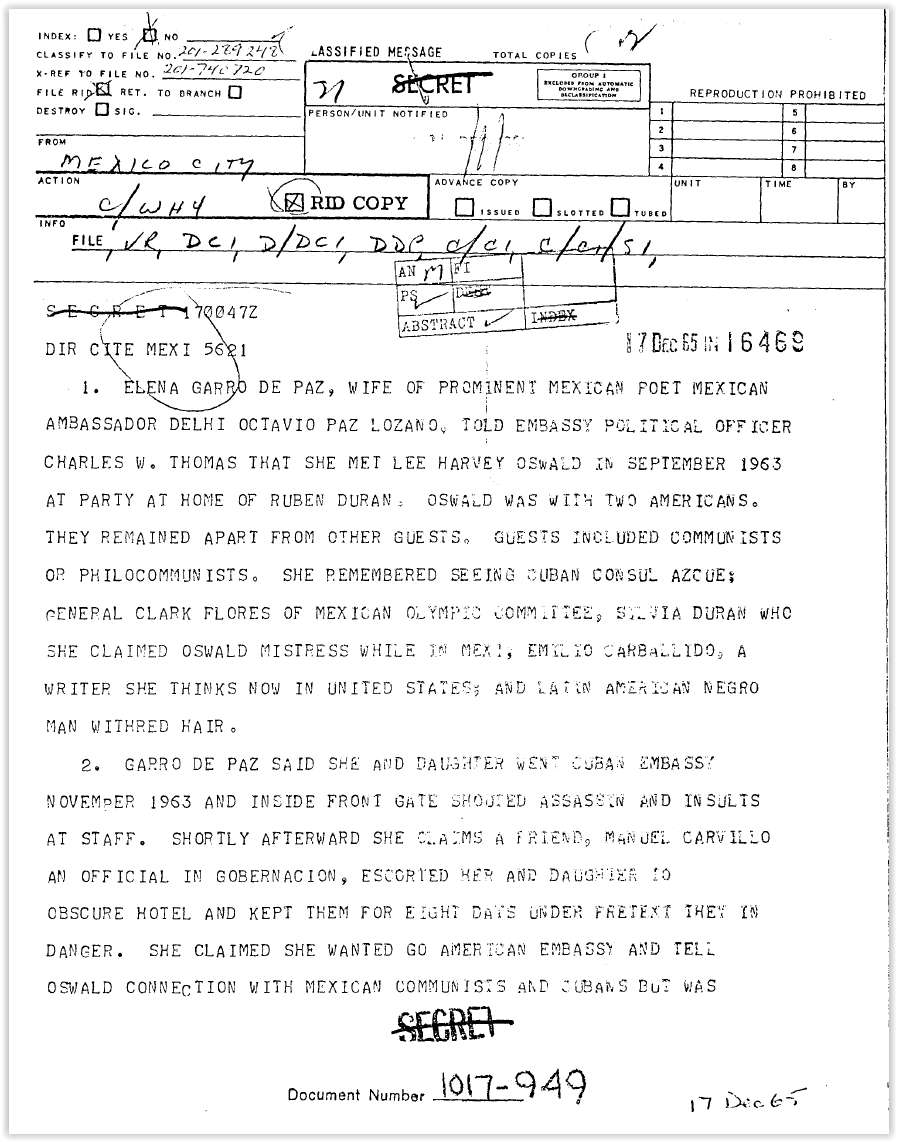 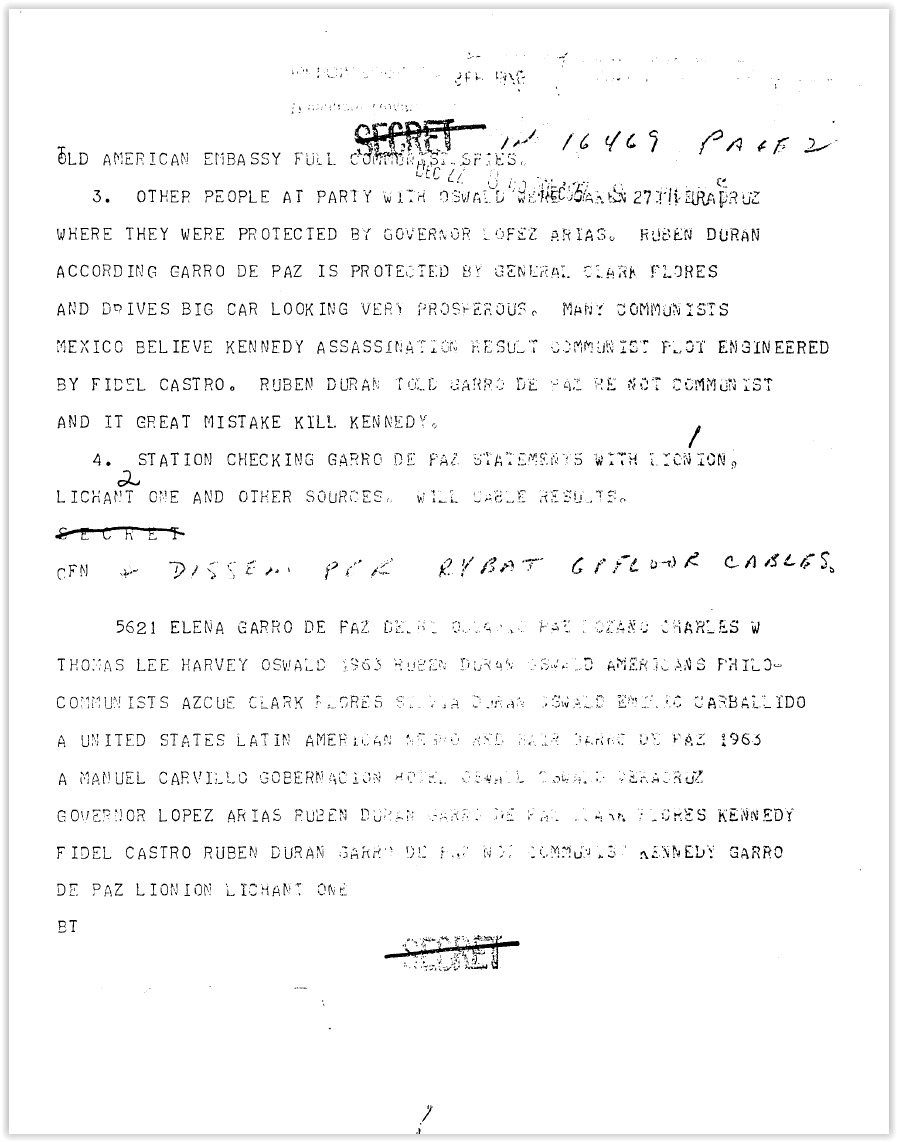 On 30 September, 1969, an FBI-CIA liaison memo was written by someone who decided to set the record straight about the supposed sighting of Oswald in Mexico City by Garro de Paz.  The first incarnation of this memo was heavily redacted. Again, the heading is from “Director” to “Legal Attaché” in Mexico City. Here is the memo:

Why the anonymity of these memos? Why would no one acknowledge them? Regarding the 9/30/69 memo, why the redactions when it was first released? The information contained here completely demolishes Garro de Paz’s credibility, hence the notion that Lee had an affair with Sylvia Durán, and that the FBI knew this to be the case!

The memo is obviously written by the Legal Attaché officer in Mexico City of the U.S. Embassy. 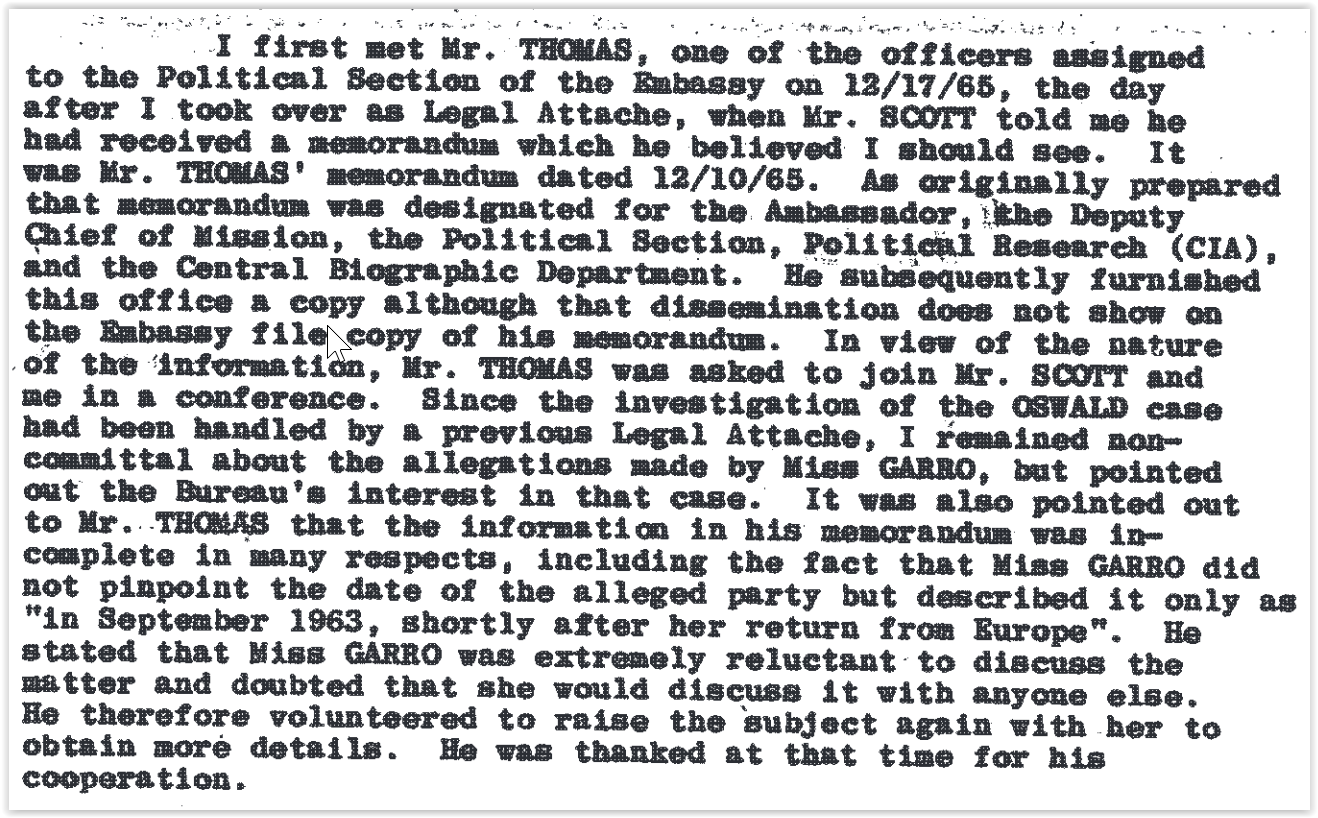 I searched for these memos, and voilà, here they are – the author of the 9/30/69 memo is former head of the U.S. Embassy Legal Ataché in Mexico City, Nathan Ferris. 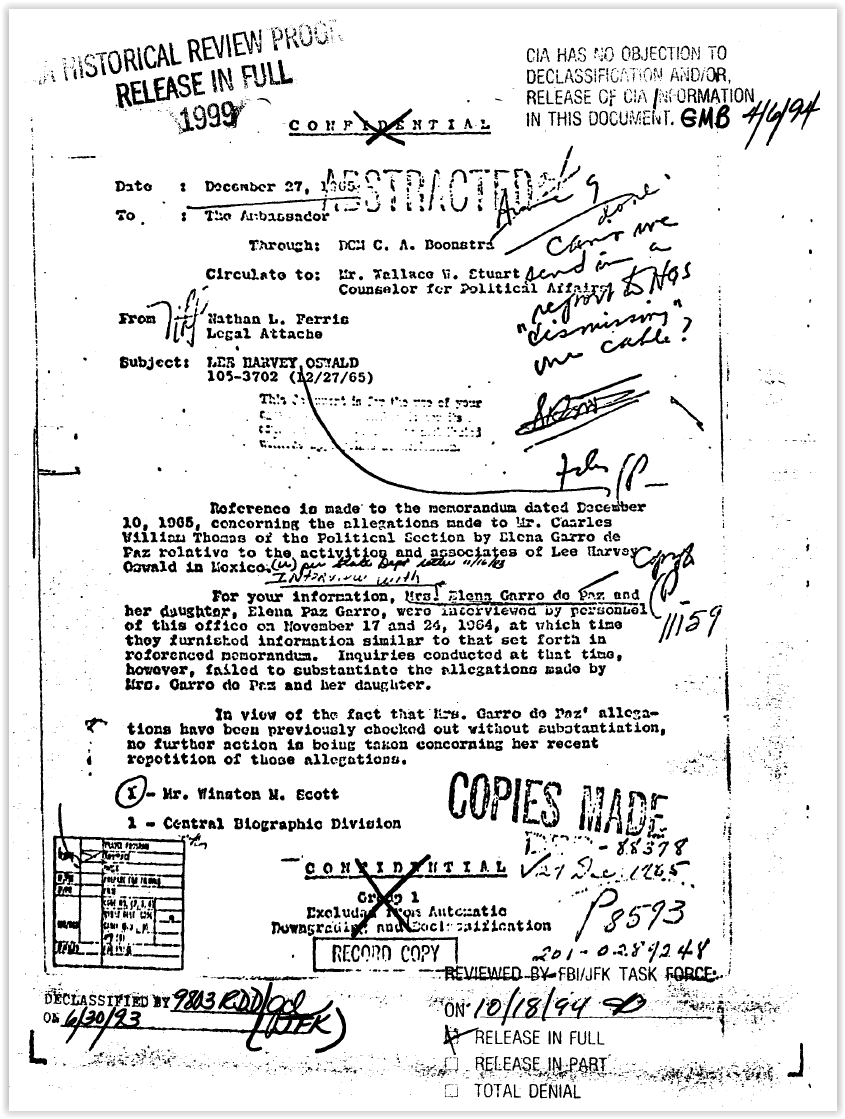 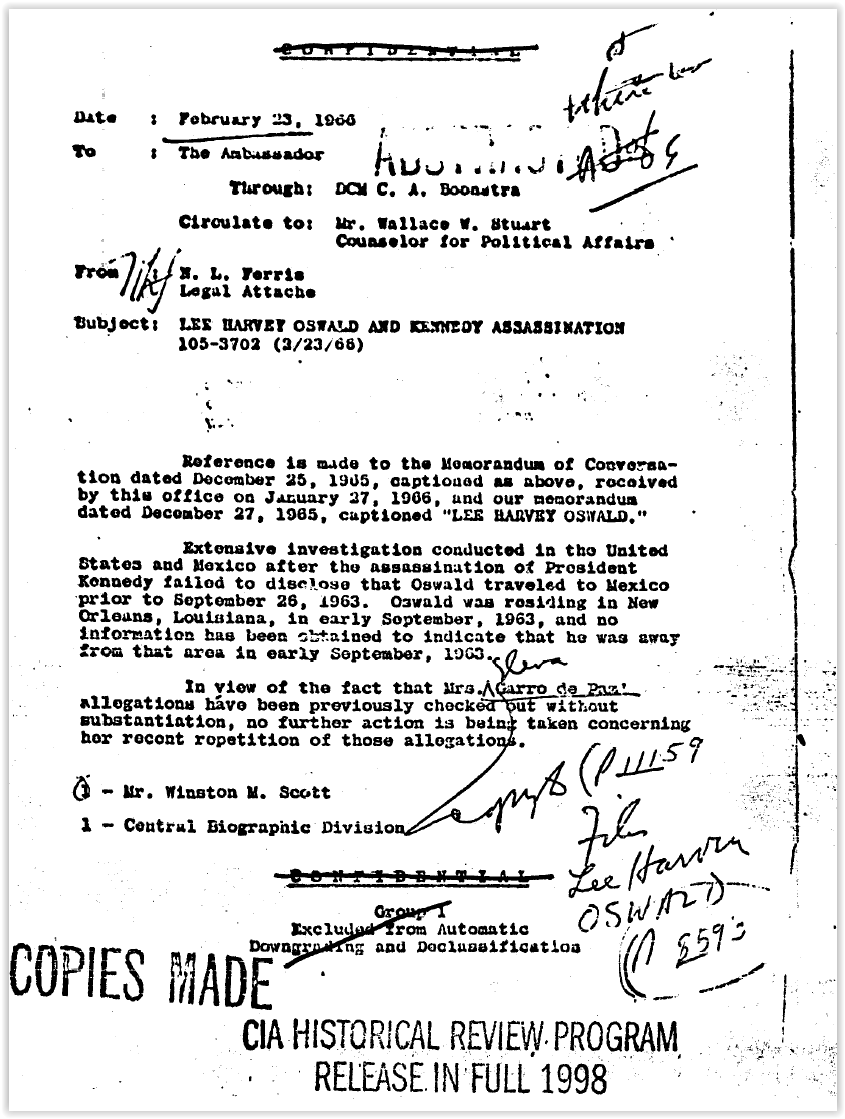 One of the most important revelations of this memo has nothing to do with Garro de Paz or Sylvia Duran. Consider the redacted vs. unredacted version of the final paragraphs of the memorandum: 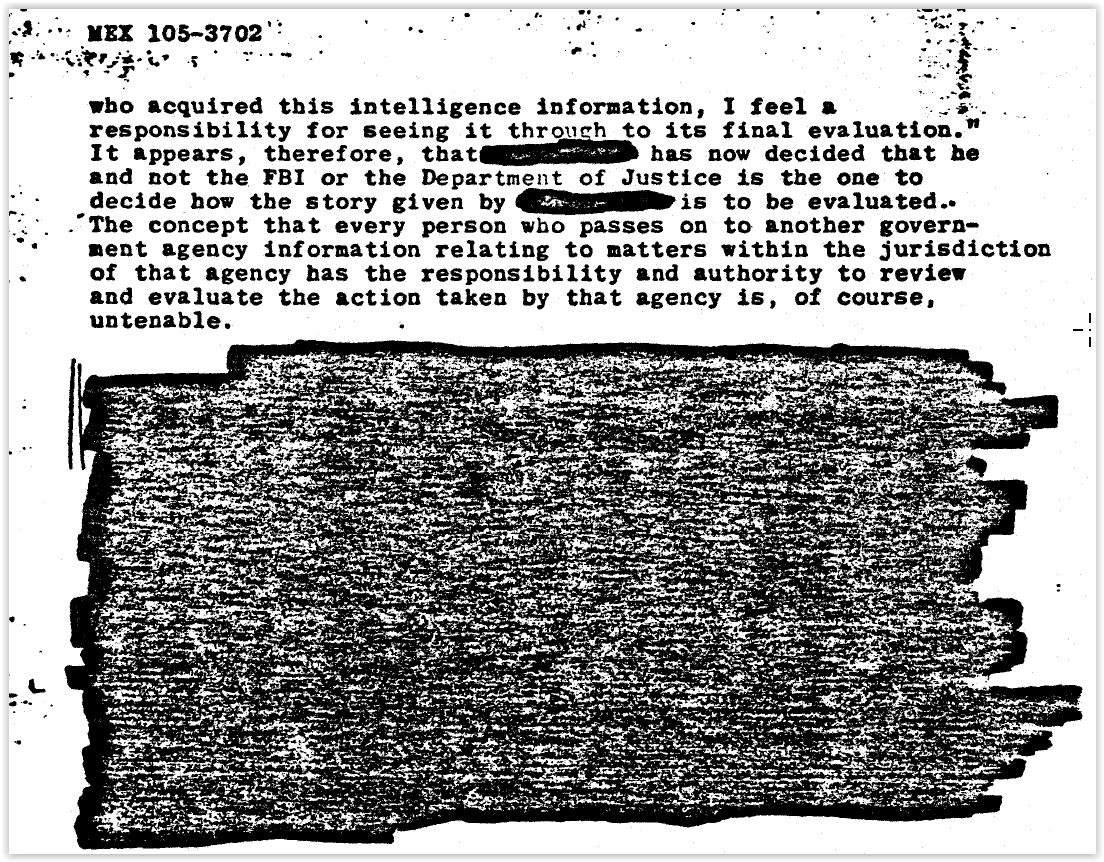 The CIA’s control over the Mexican government here is unprecedented, and explains how and why Sylvia Durán and her husband Horacio underwent the abuse they did at the hands of the Mexican authorities on behalf of the Deep State.

To summarize the timing of communications from CIA and FBI regarding Elena Garro de Paz:

These clearly indicate some kind of arm twisting went on here.  The reactions are obvious when examined from a chronological point of view.

Finally, as mentioned above,  the memos shown in this post were the basis of the Lopez Report which concluded that there was no evidence of a Durán-Oswald affair: 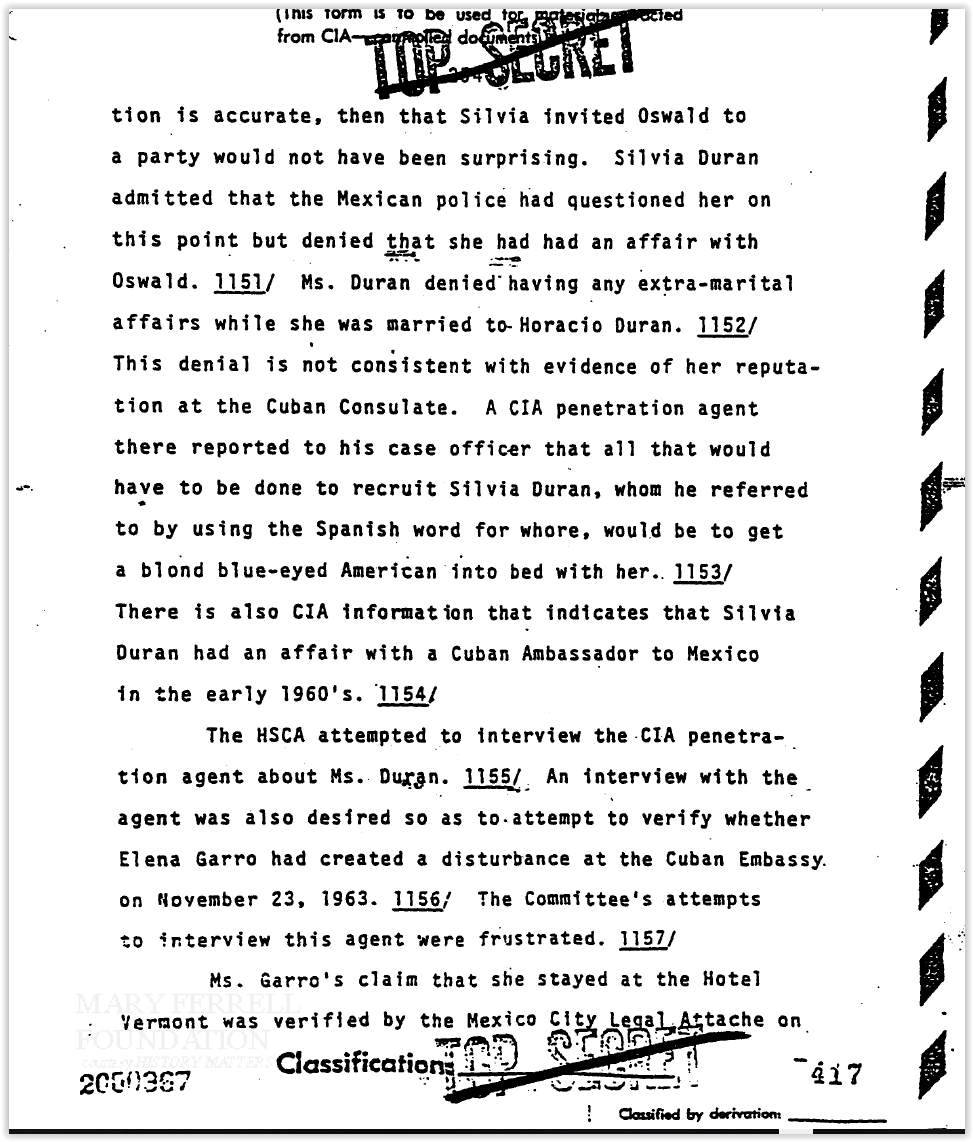 When Lopez tried to track down this “CIA penetration agent” who spread the rumor of Durán’s promiscuity, of course he was unsuccessful in doing so.  Was this “penetration agent” Carlos Jurado Delmar, AKA LIRING-3? I would bet the farm.