Background on the Blahut case

On June 23, 1978,  HSCA staffers detected a breach of security involving the JFK autopsy photographs and CIA agent Regis Blahut.  This is nothing new – The Washington Post reported the case a year later as follows: 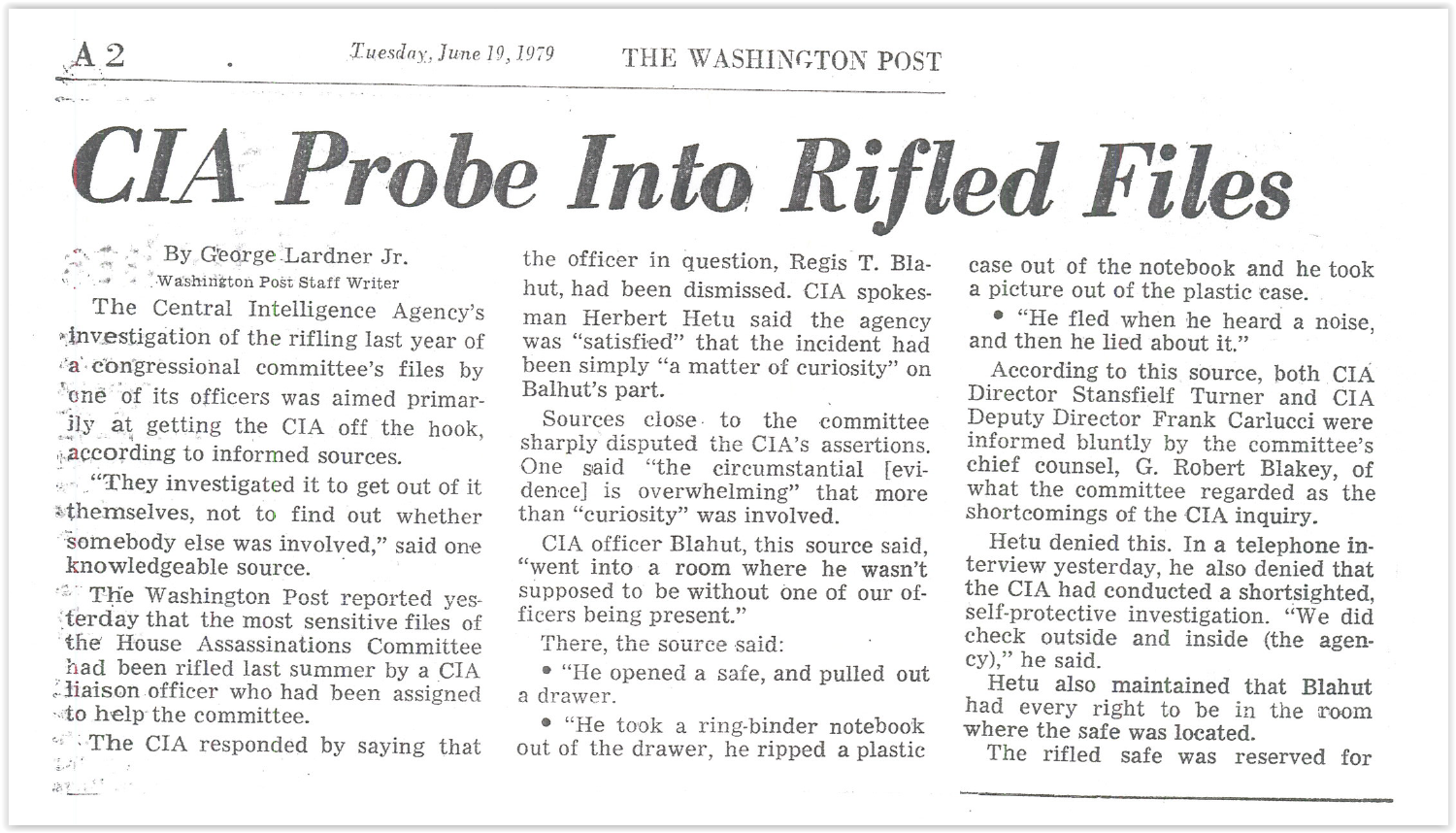 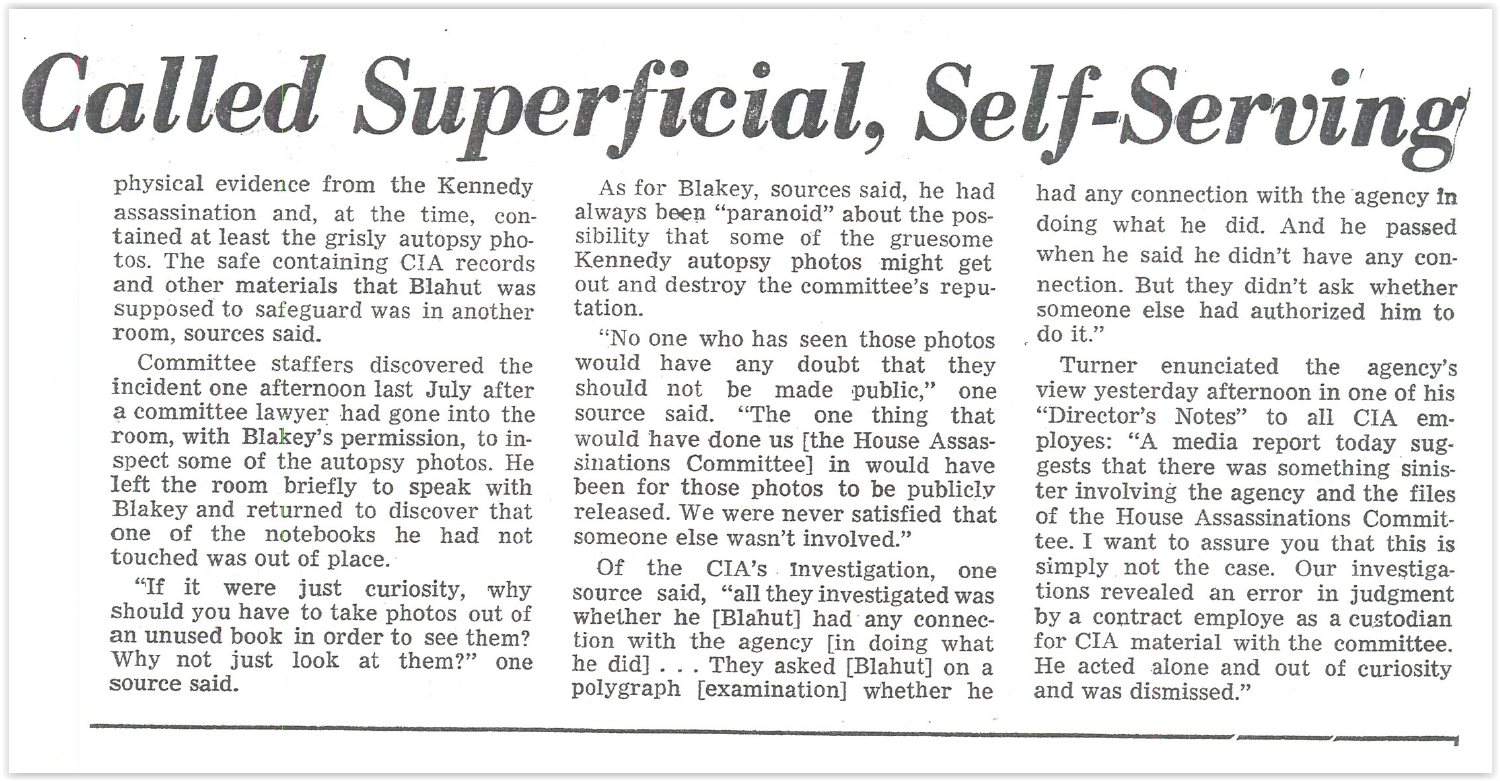 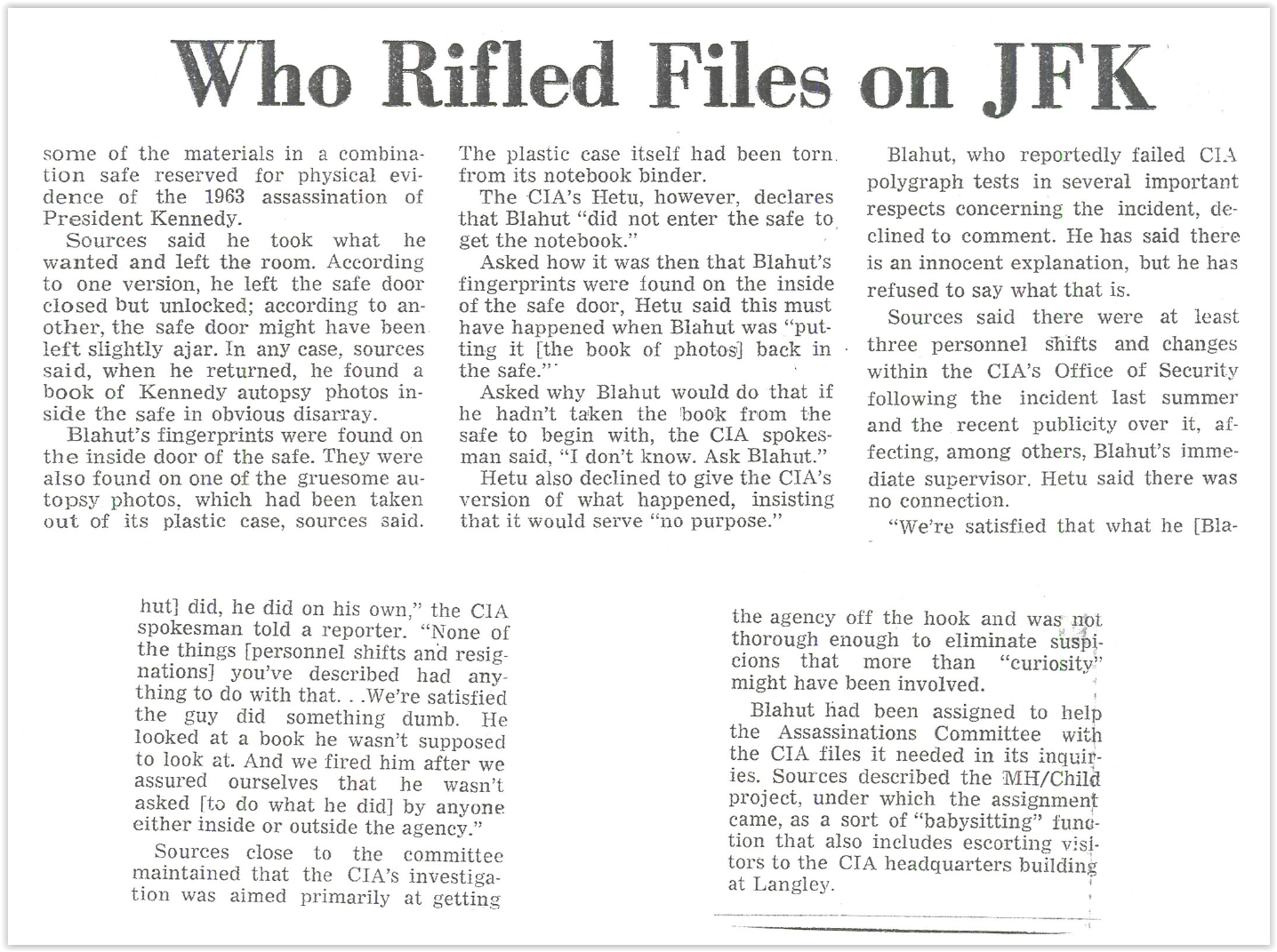 Very few researchers have posted information or thoroughly investigated the Regis Blahut case. This one is at www.whokilledjfk.net .

JFK researcher Anthony Frank tried to start a discussion on the Education Forum about the Blahut case and was unceremoniously ignored by the brilliant minds that populate that forum.

What’s in the new documents

The new documents reveal how HSCA staffers were livid about Blahut’s intrusion, and recommended a full investigation, even if it meant going up the ladder of command at Langley.  Director of Security for the HSCA Robert Morrison wrote this July 10, 1978 memo to Chief Counsel Robert Blakey regarding tampering of JFK autopsy  photographs: 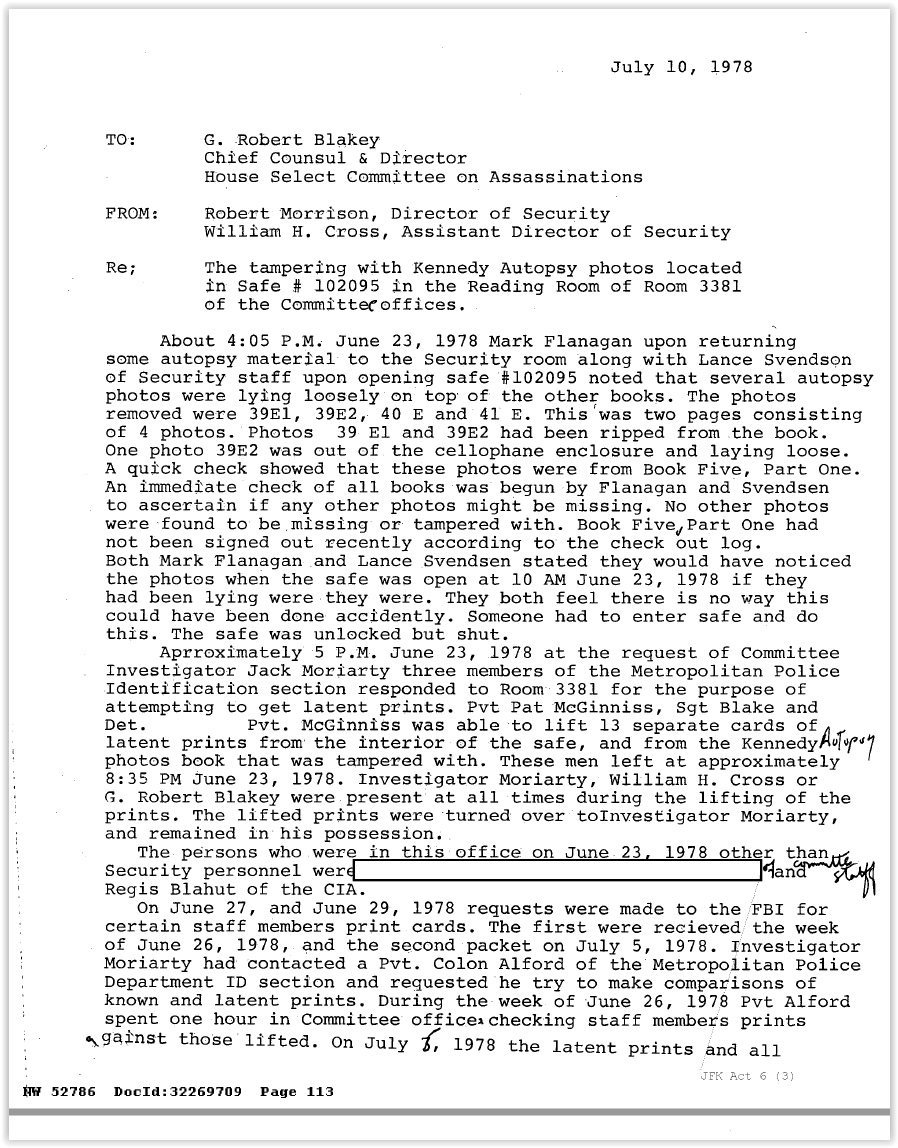 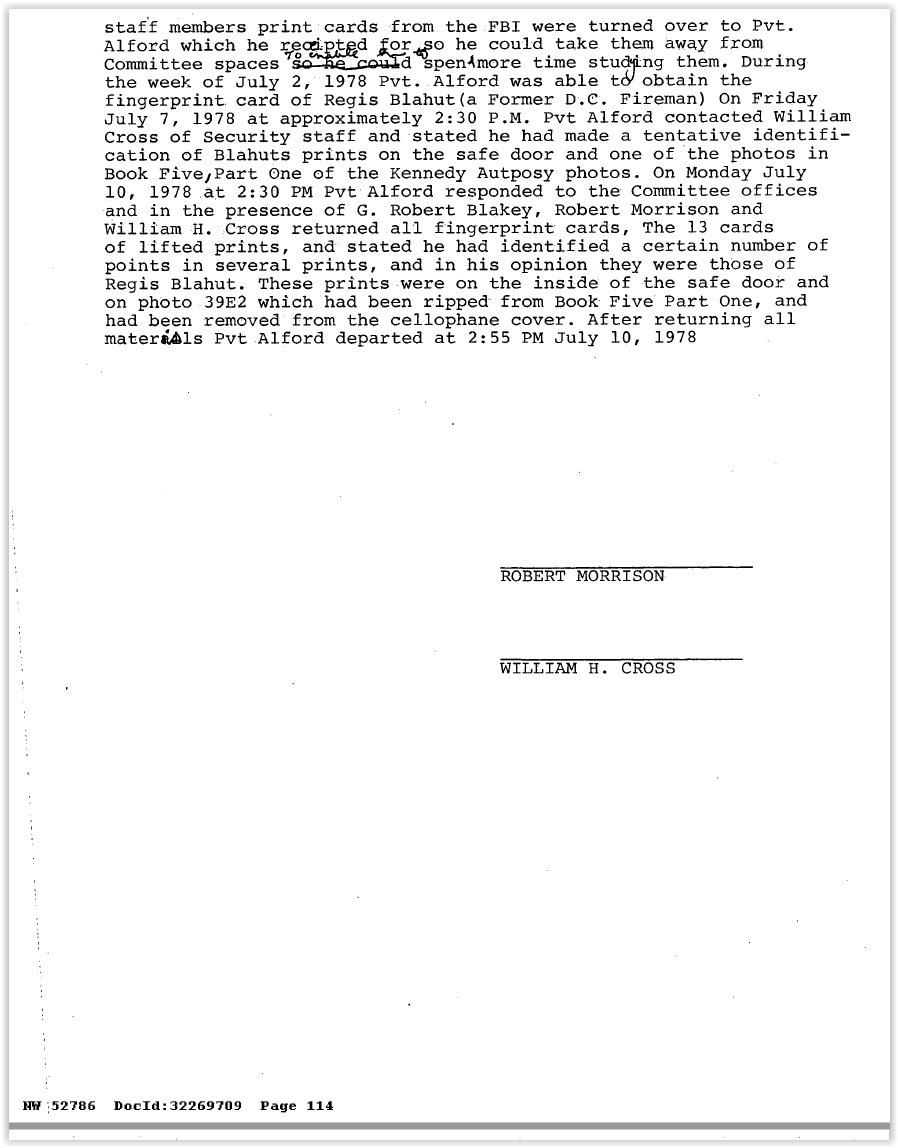 The third page of the memo speaks for itself, notice the handwritten add on: 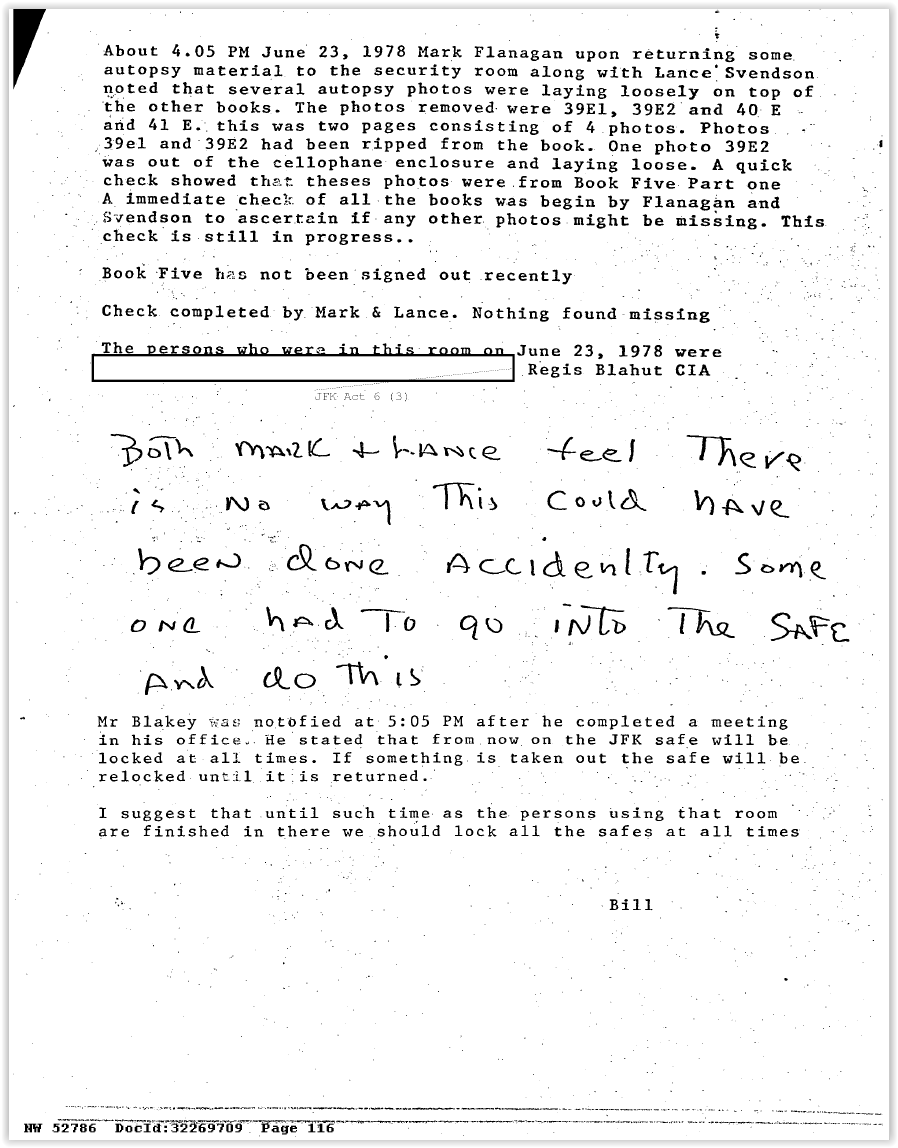 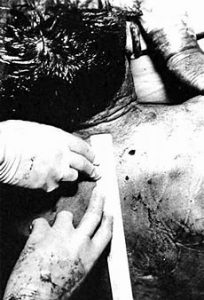 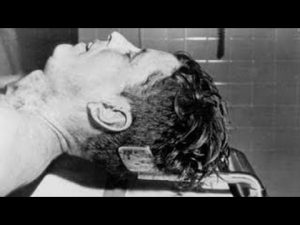 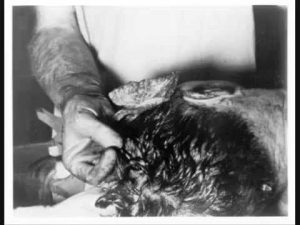 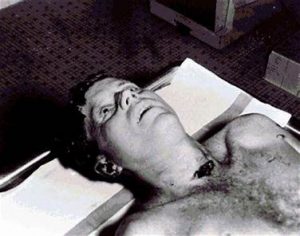 It appears from the content of these new documents, that HSCA staffers were pretty pissed off about the actions of Regis Blahut, and wanted to pursue the case to its ultimate consequences.

This incident was considered by HSCA Chairman Louis Stokes  to be  of sufficient importance that  he should send HSCA Chief Counsel Robert Blakey to meet in person with CIA Director Admiral Stansfield Turner.  This was unprecedented – DCI’s never met with committee underlings –  and Turner made sure his top lieutenants Fred Hitz and DDCI Carlucci were present for this meeting.  Here is the Outside Contact Report that summarizes the meeting: 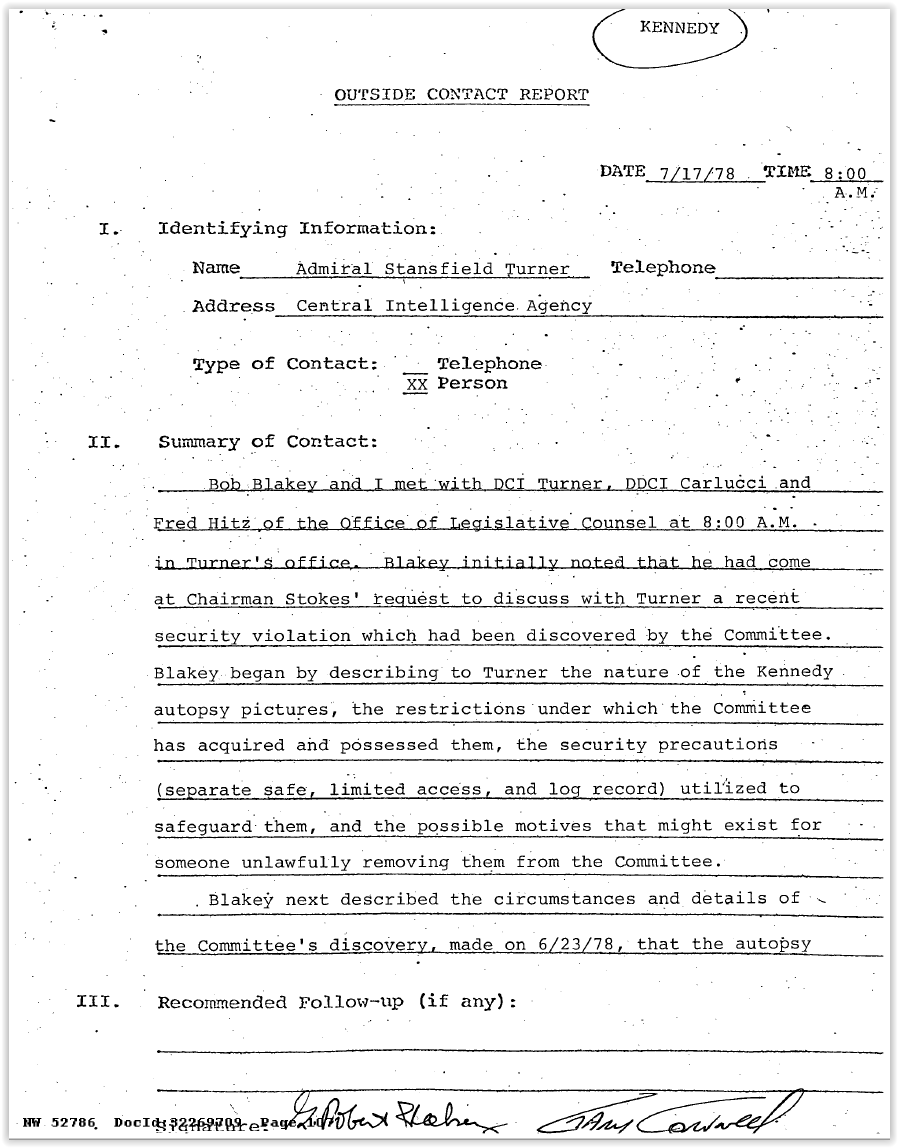 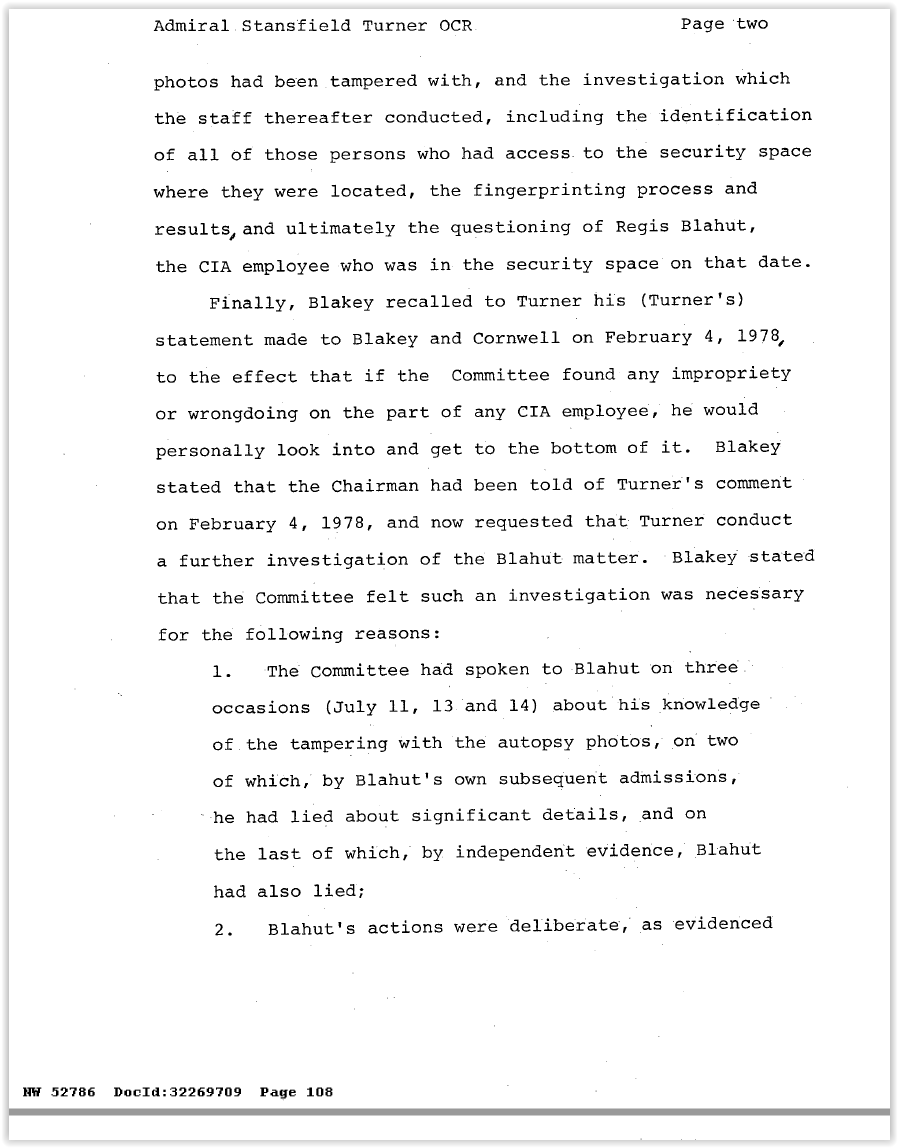 #4 below: Blahut lied after consulting and speaking with his superiors at the Agency 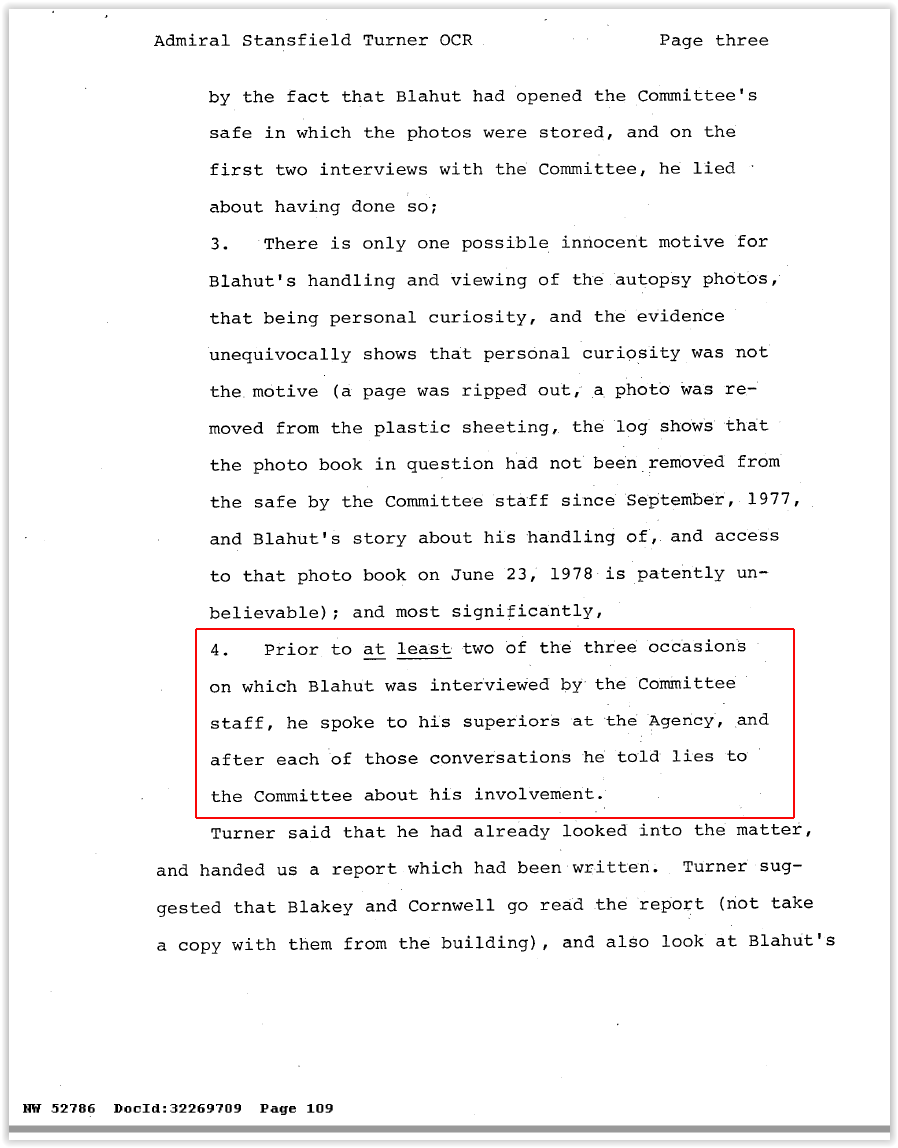 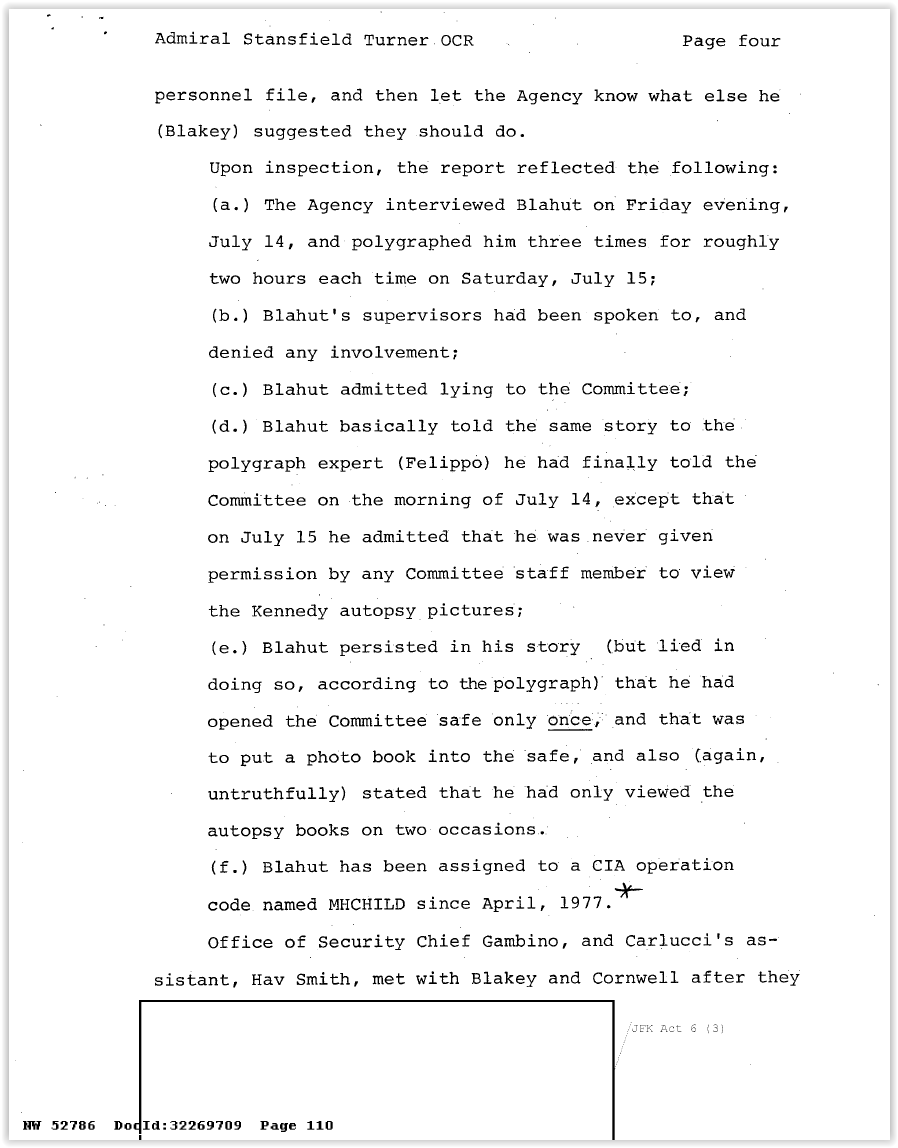 “99% sure final report would show no involvement in the tampering on the part of the agency.”

“Buy a pig in a poke” =[Something whose true value is concealed or unknown, especially something offered for sale.]

Blakey stated: “Full interviews of all of Blahut’s supervisors should be conducted, and written reports made.  In addition Blakey stated that new polygraphs should be taken…” 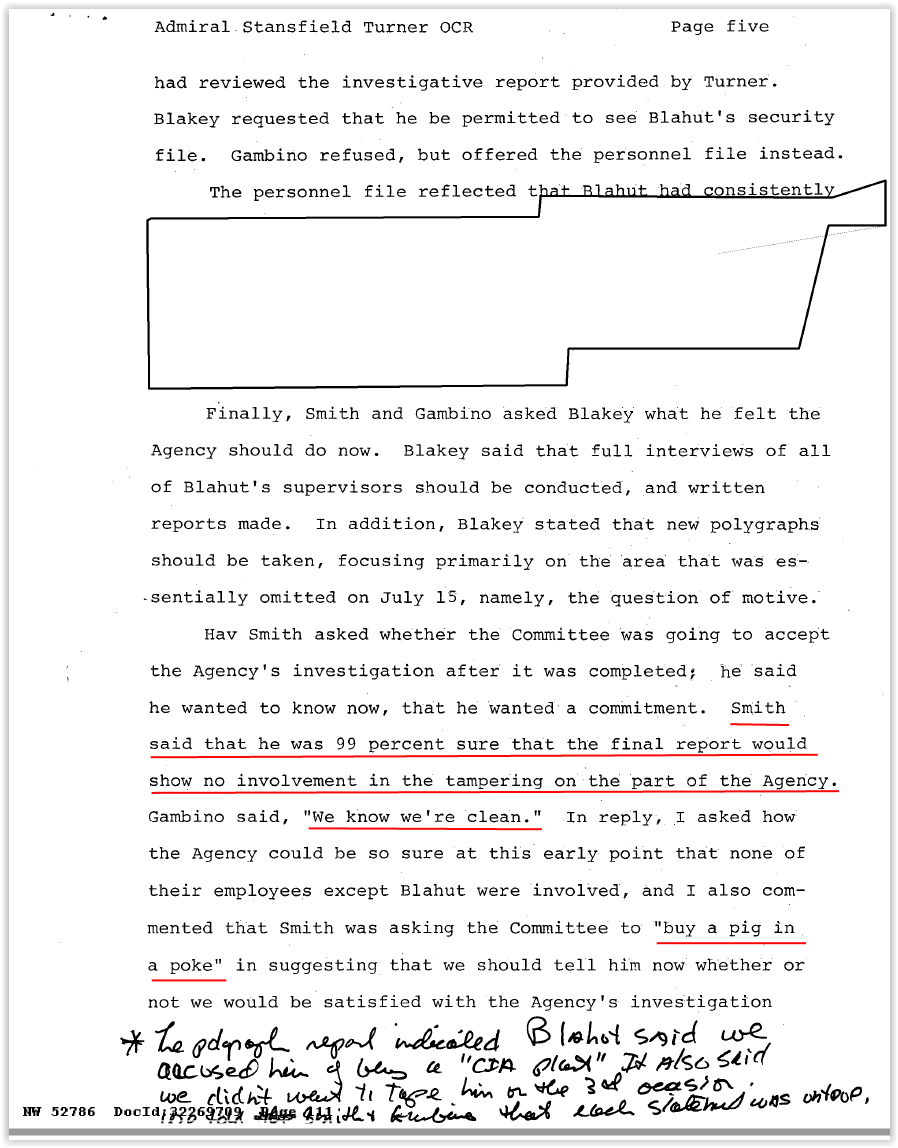 “General understanding that Blakey’s suggestions would be followed” 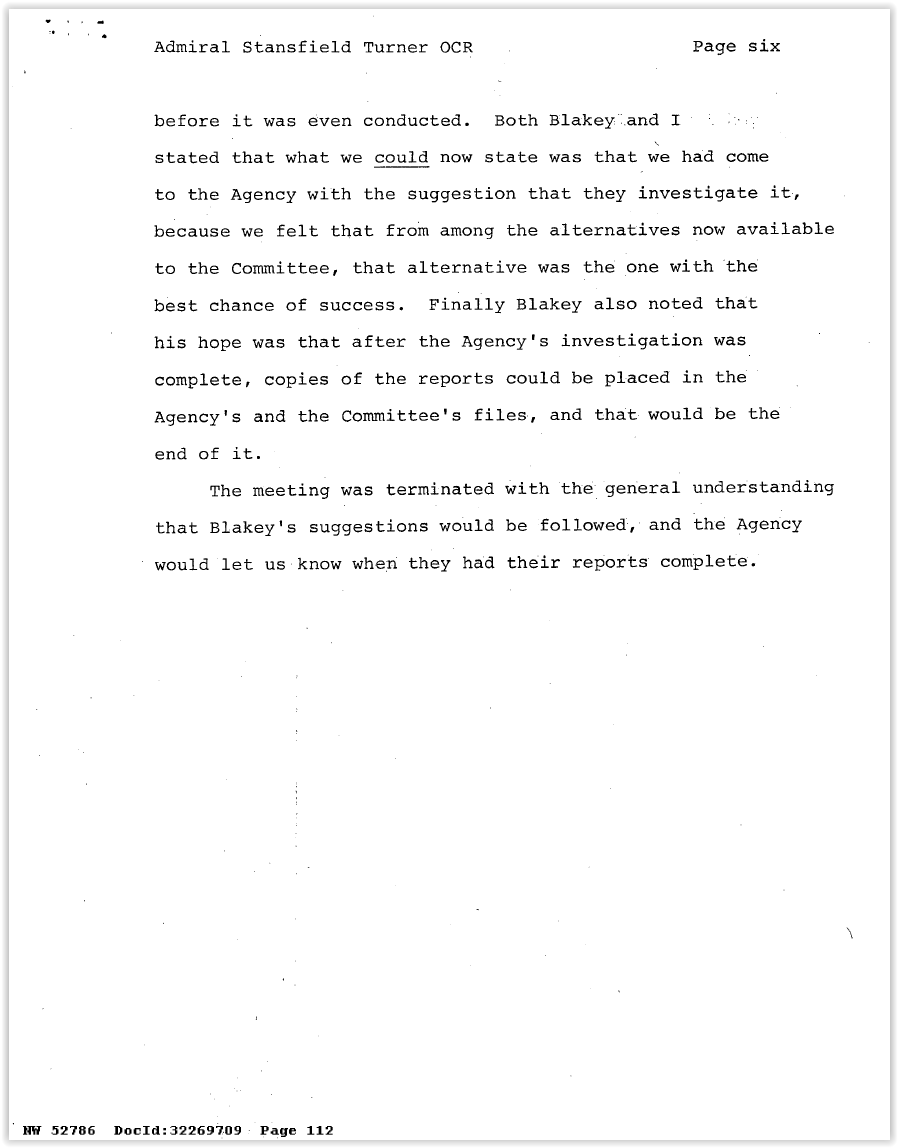 Were Blakey’s  recommendations followed??? Did Louis Stokes follow up to make sure they were??