The early women in JFK

Sylvia Meagher, Shirley Martin, Lillie Castellanos, Maggie Field, Mae Brussell, Mary Ferrell, Dorothy Kilgallen – all of them first generation JFK assassination critics, researchers,  investigators and authors.  Women were very well represented in this field and made incredible contributions that helped advance the case in its early stages, when very little information was available and at a time when the FBI, CIA and Warren Commission were controlling what the public could have access to.

That is how I begin Part 5 of my book, The JFK Horsemen dedicating 63 pages to this extraordinary JFK assassination investigator.  Beverly has never been included or considered worthy of being among the first generation women investigators mentioned here.  Yet 50 years after her short investigative career ended, a new generation of JFK researchers is revisiting her work and realizing it is time for Ms. Brunson to take her place among the greats.  A poet by vocation, she used her ability to write to put together a series of papers that to this day must be considered among the best of her time.  Here is an excerpt of one of her letters to Harold Weisberg:

Yes,  Ms. Brunson used a lot of reasoning trying to topple the opposition and the metaphor of Queen Hecate fits her well.  So much so, that her JFK investigations came to an abrupt halt in the midst of her very best work, and I will come back to that.  Unfortunately, Weisberg appeared to not take her work very serious, and opted instead to file her papers and correspondence away, in the hope that others, perhaps in the distant future, would be interested in revisiting them.  That time has now finally arrived.  Beverly’s interest and passion for the case is best expressed in this passage:

“You will, I trust, forgive me for sending you so much and at my own will. This case has come apart. I eat and sleep it.  And I think the time is crucial.  I have acquired a number of gray hairs, my first, these last two months, but I am not ashamed of them.”  – Beverly Brunson,  28 March, 1968

Ms. Brunson investigated many aspects of the assassination and was one hundred percent convinced the photographic record that remained in the JFK assassination case was tainted and could not be trusted.  This is precisely where Weisberg differed, because he considered this evidence to be authentic.  Brunson was in possession of a copy of the 26 volumes of the Warren Commission and she dissected each and every one of them.  No detail escaped her keen eye.  Bear in mind that she had no access to any film, only still images of the Zapruder film published in the Warren Commission (black and white) and Life Magazine (color) and other magazines and early  books of the time.  She studied the early classics like Meagher’s Accessories after the Fact, Thompson’s Six Seconds in Dallas, Lane’s Rush to Judgement, and especially Whitewash 1 and 2 by Weisberg.  I go into a lot of detail in the book, but here is a quick synopsis of her best contributions. Some have already been covered in this blog in the past: 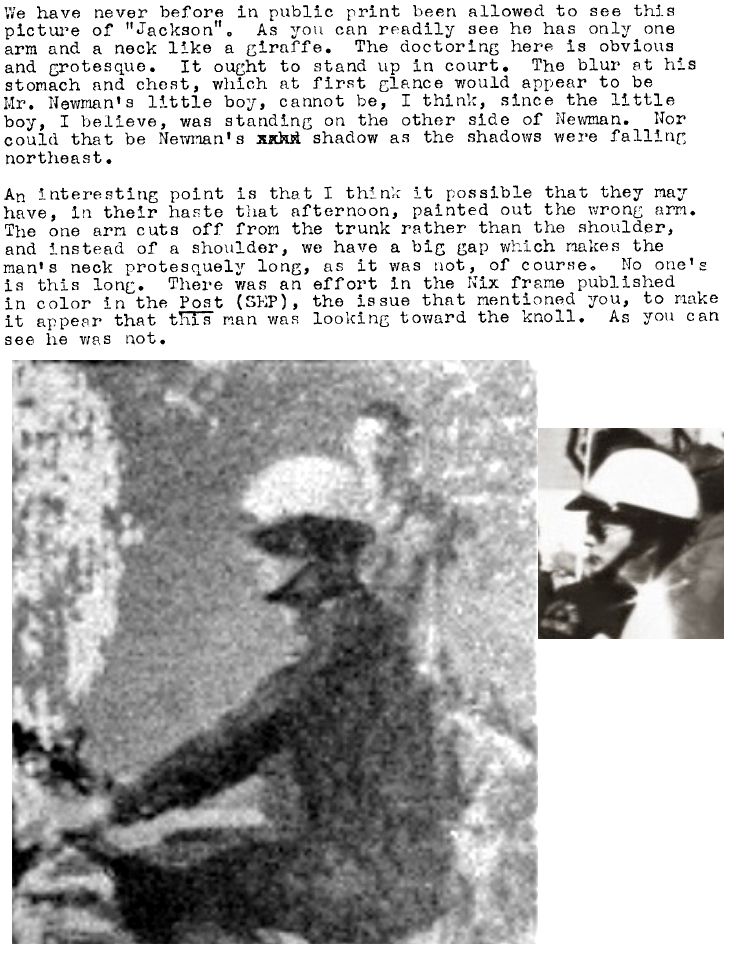 Was Brunson discovering new information on the JFK assassination? First off, she was positive her mail exchanges with Weisberg were being opened, the exact term in intelligence jargon seen in our previous post is “flaps and seals”.

On September 5, 1967 Beverly made the short 8 mile drive to neighboring Joplin MO., to meet up with a young woman, presumably to exchange JFK research information and perhaps track down a lead.  She carried in her purse pages upon pages of her research and correspondence with Weisberg. (One of the letters she had with her was correspondence with Richard Sprague regarding the motorcycle escorts.) This person was a slim, short haired young woman Beverly had never met. After a couple of drinks, Brunson found herself a few hours later being pulled out of her car by five “irate” cops who told her they had been chasing her for the past hour and a half, where she had been driving on the wrong side of the road, with headlights turned off, speeding and running red lights, and causing a minor accident. She had been cut in her leg and had a nasty knot in the middle of her forehead. The last thing she remembered was that the woman had been driving Brunson’s car before she blacked out. The woman turned out to be a friend of one of the arresting officers and the policemen examined the JFK documents and correspondence that she had in her purse with amusement, while commenting what a nut she was. She was never charged with anything because the doctor who treated her advised the police she was not drunk. (Brunson letter 9/13/67) Weisberg was convinced Beverly had been drugged and was lucky to be alive, and thought that if this ever was to happen to anyone, it would have been him!  One day I told Vince Salandria about this incident and he was dumbfounded, wondering why it did not happen to him.

As a result of this incident, Beverly Brunson’s JFK investigative activities shortly thereafter came to a screeching halt.  If she was intimidated enough to abandon her JFK research, we will never know. Her enthusiasm and dedication, however, during the two years covered in the Weisberg documents leads me to conclude that she was years ahead of her contemporaries, and many of her theories are being proven correct 50 years later.