The Netflix documentary “Who killed Malcolm X” portrays the Newark African American community as a hermetic one in which the identities of the killers of Malcolm X was widely known, but access to information regarding the assassination was never possible due to a sort of “omerta” which existed in the community. Omerta in the sense that: “(as practiced by the Mafia) a code of silence about criminal activity and a refusal to give evidence to authorities.” Several senior members of the Nation of Islam interviewed by Abdur-Rahman Muhammad tried to discourage him from investigating the Newark angle of the assassination, urging him to  “leave it alone”, “that’s not something that we talk about”, and another warned not to disturb dry dung lying in the street for the obvious reasons. Thus, the viewer is left with the impression that the identification and prosecution of four members of NOI Mosque 25 in Newark who got away with murdering Malcolm X was an issue that was best relegated to history books and left undisturbed.

On 29 May 1980, New Jersey Congressman William J. Hughes (2nd Congressional District), reacting to pressure from his “constituents”, sent a letter to then FBI Director William H. Webster asking to reopen the Malcolm X assassination investigation.  The letter cited new evidence that had come to light, which the petitioners were willing to divulge, presumably in a formal setting. These letters, including the FBI reply were found buried in the FBI digital vault which keeps copies of heavily redacted Malcolm X documents covering virtually his entire adult public life up until his assassination, including coverage of the trial which sent three NOI members to jail for life.

But Congressman Hughes district DID NOT INCLUDE NEWARK.  As noted above, he was Congressman for the 2nd district which includes Atlantic City in southern New Jersey as shown in these two images. Newark belongs to the 10th Congressional district: 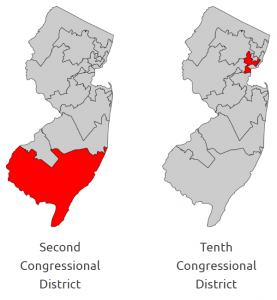 In 1980, Peter Rodino, of Watergate fame, was Congressman for the 10th district of New Jersey, which included Newark.  He was one of the longest-serving Congressmen in U.S. history, serving from 1949 to 1989. So why was Congressman William J. Hughes in New Jersey’s Second District taking up this petition, which had nothing to do with his constituents? Did Rodino flat out refuse to petition the FBI in the manner that Hughes did? Why did these Newark witnesses find it necessary to travel all the way to South New Jersey (or Capitol Hill in D.C.) to interact with a Congressman who was not even their official representative?

From document malcolmx19.pdf page 123 we find this: 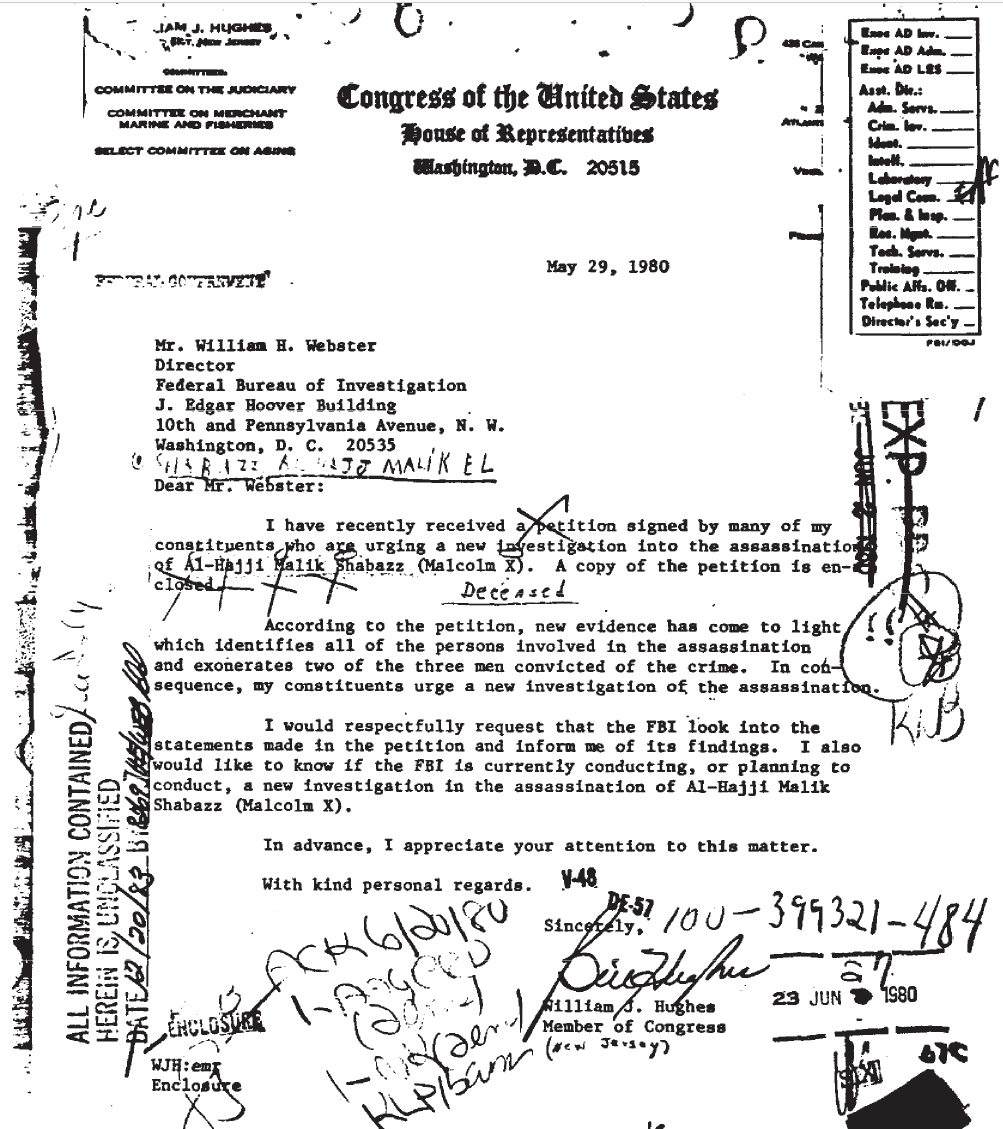 Congressman Hughes’s letter was very specific and proffered the following:

“According to the petition, new evidence has come to light which identifies all of the persons involved in the assassination and exonerates two of the three men convicted of the crime.”

The petition laid out that those who signed it knew who the assassins of Malcolm X were and wanted the full exoneration of Norman Butler and Thomas Johnson, who spent over 20 years in jail for a murder they allegedly did not commit.  There was no ambiguity whatsoever in Hughes’s letter and petition.  Moreover, individual statements were included in the petition:

“I would respectfully request that the FBI look into the statements made in the petition and inform me of its findings.”

Eventually, it was learned that the following men were involved but were never brought to justice: Benjamin Thomas, Leon Davis, William X Bradley, and Wilbur McKinley.

Any honest law enforcement agency would have and should have jumped all over the opportunity to follow new leads and perhaps even solve this heinous crime.  It appears from Hughes’s letter that the perpetrators were being offered on a silver platter, however, once the petition reached the FBI, the names of the petitioners were erased and redacted! The statements mentioned above are not included in the petition and appear to have been removed. 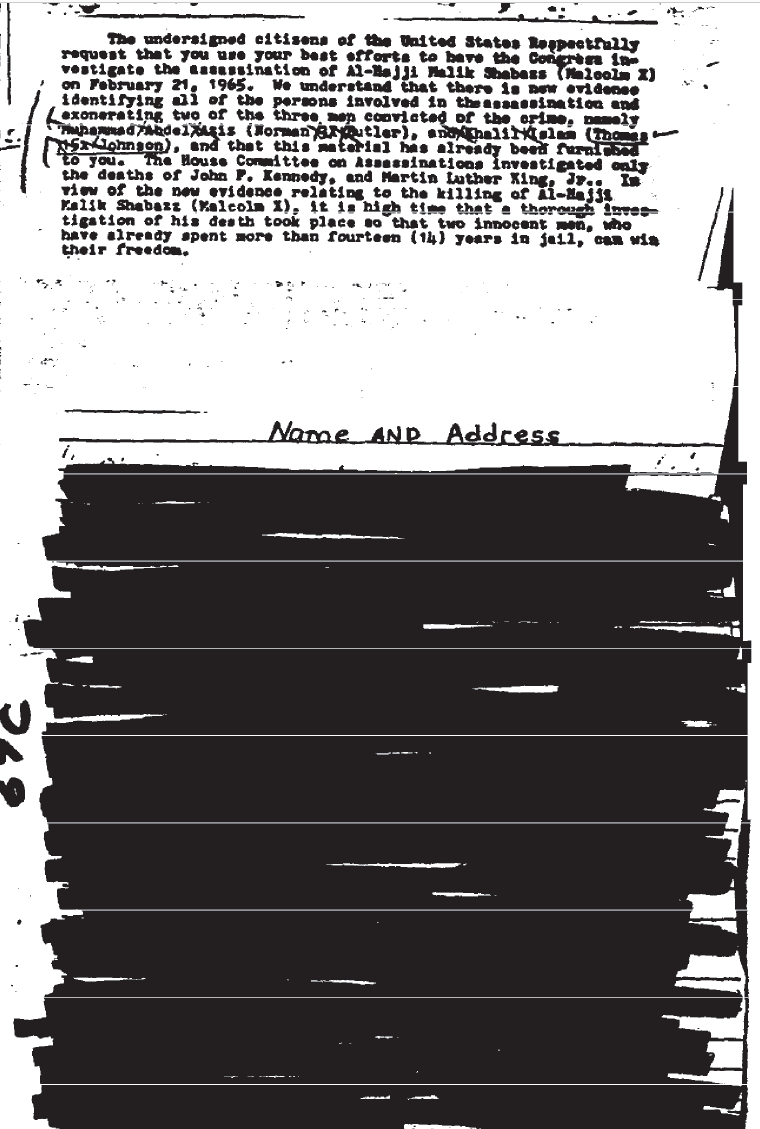 The reply by the FBI dated 20 June 1980 is absolutely nothing short of astounding, where not only is the buck passed on to meaningless agencies but clearly ignores the main argument of Hughes’s letter regarding new evidence coming to light and offers this ridiculous statement:

“A review of records of the FBI and CRD, USDJ, fails to reveal any information that the FBI has investigated or been requested to investigate, the assassination of Al-Haggi Malik Shabazz (Malcolm X).”

Congressman Hughes was not asking for information that the FBI might have had – he was offering new information from people who knew the identity of the other four killers of Malcolm X!!!!! The FBI systematically put this one to bed by ignoring the main arguments of the petitioners. 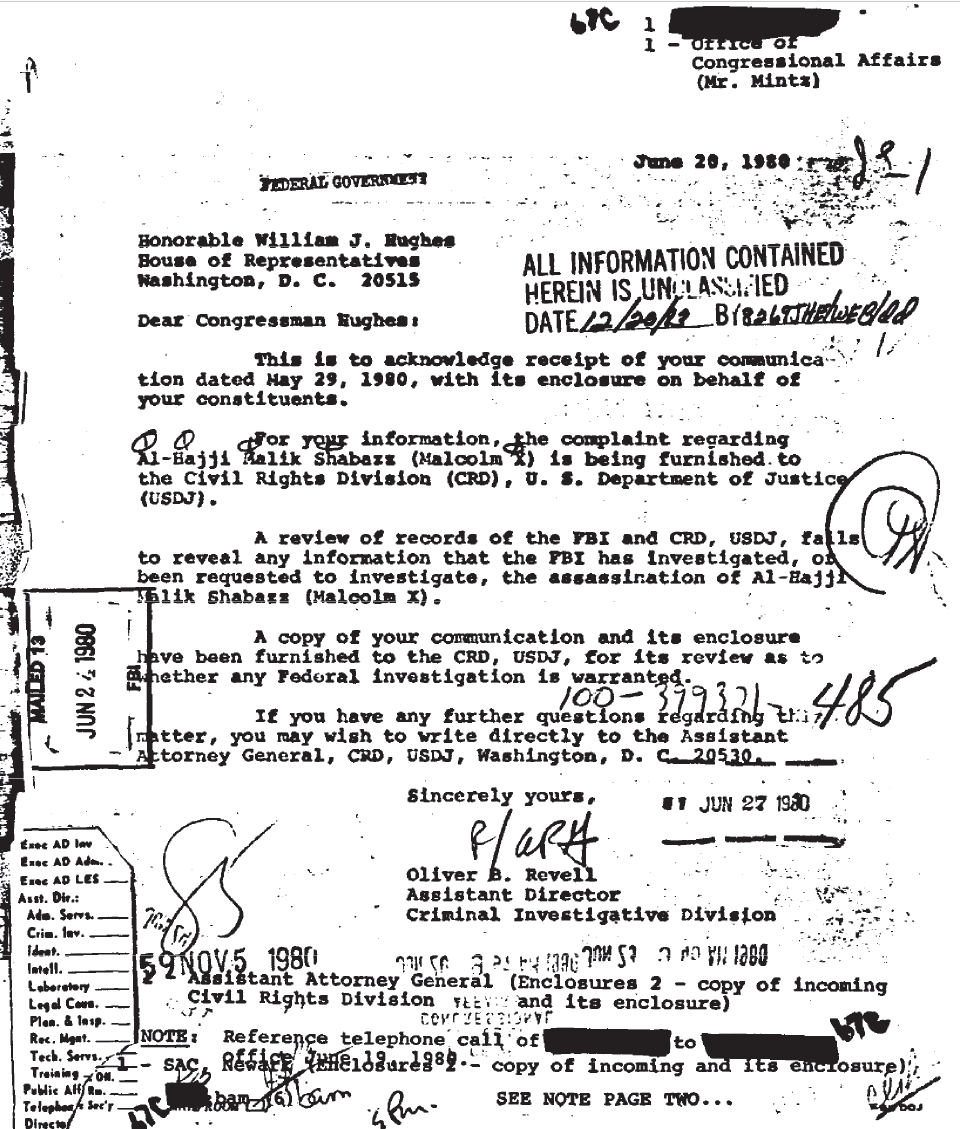 This letter by Assistant Director Oliver B. Revell abuses the basic rights of U.S. citizens who organize and utilize the proper mechanism of contacting their representatives in Congress to elicit a response from agencies that they help finance and operate with their tax dollars.  Furthermore, the lack of action by Congressman Rodino raises serious questions about this entire affair. 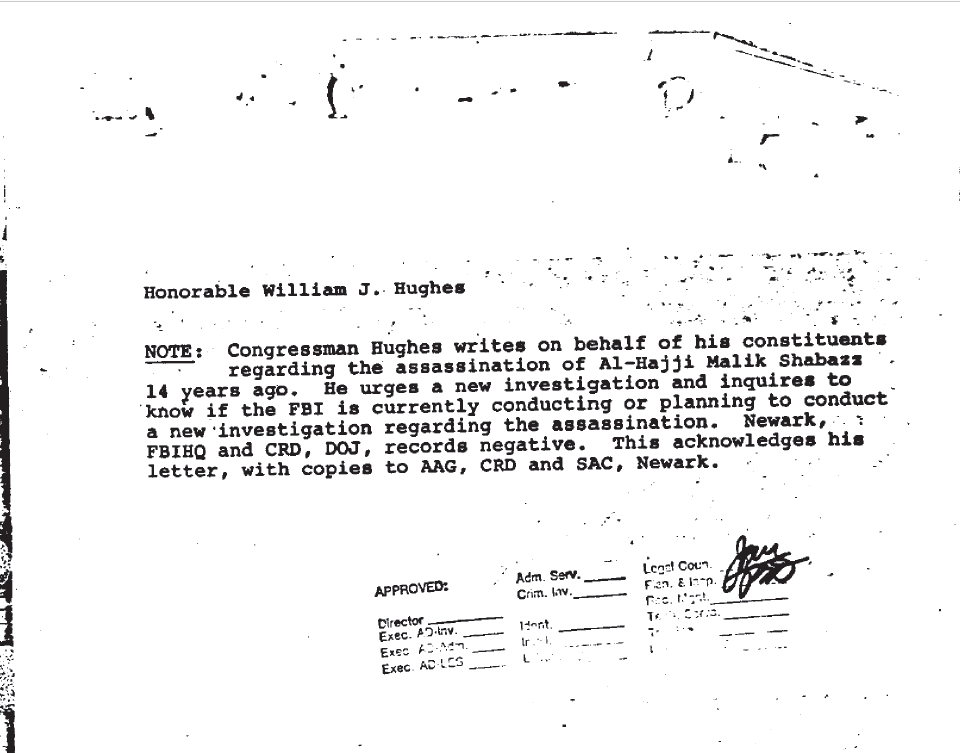 As mentioned in the previous post of this blog, eventually it was learned that nine FBI informants were present during the Malcolm X assassination.  The evidence also appears to indicate that “Shotgun man” William X Bradley (Al Mustafa Shabazz), more than likely was an FBI operative who was allowed to escape the premises of the Audubon Ballroom and appears to have been protected “by the state” throughout his life.

Finally, Congressman Rodino’s apparent refusal to go to bat for his Newark constituents adds another layer of mystery to the Malcolm X assassination saga.