While doing research about three years ago, I ran across this memorandum from FBI Agent Leo Gauthier to FBI associate director Nicholas P. Callahan.  You can download the memo here:

BIRTH OF THE SINGLE BULLET THEORY

Why is this memo so darn important?

Let’s break this down.   This memo tells us about a meeting that was celebrated January 27, 1964,  just a little more than two months after the assassination.  According to the memo, the purpose of the meeting was to view the Zapruder and Nix films, and try to figure out the shot scenario that killed JFK.

Roll Call – Representing the FBI were Leo Gauthier and Special Agent Lyndal Shanyfelt, who was the FBI’s resident photographic “expert”.   Harold Weisberg had his “yellow eye” on Shanyfelt.  He believed this guy was as crooked as could be, and that he was one of the architects of the photographic deception prevalent in the JFK record.   You can view some of Harold’s work on Shanyfelt here:  http://jfk.hood.edu/Collection/Weisberg%20Subject%20Index%20Files/S%20Disk/Shaneyfelt%20Lyndal%20L/   Harold even had him deposed for his Civil Suit CA-75-226 of 3/29/77  http://jfk.hood.edu/Collection/Weisberg%20Subject%20Index%20Files/S%20Disk/Shaneyfelt%20Lyndal%20L%20Deposition%20in%20CA%2075-226%2003-29-77/  That’s right, it took Weisberg almost 14 years to get this guy to answer questions in a legal setting.  He went as far as flat out calling him a liar.

And in this corner…. 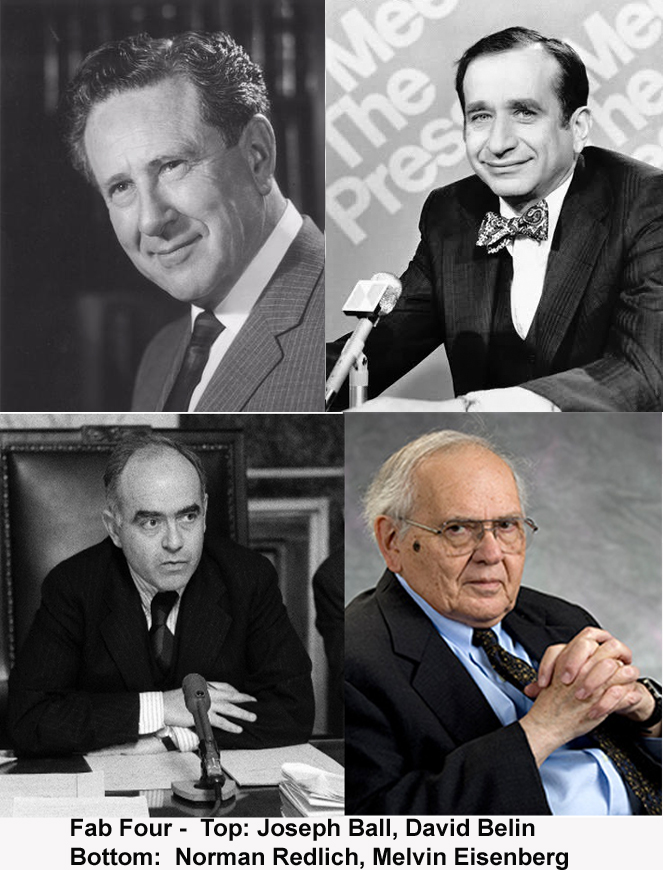 “As with Watergate, numerous lawyers were involved with the Warren Commission; in neither case did these lawyers act as lawyers. Rather, they participated in a cover-up and acted as accessories in serious crimes.” – Howard Roffman, Presumed Guilty ©1976

Who wouldn’t have loved to have been a fly on the wall for this one!  These guys spent EIGHT AND A HALF HOURS in the same room trying to pound this square peg into a round hole!  They must have reeked of B.O. and coffee!    By definition, the FBI and Secret Service were (are) law enforcement officers who were (are) duly trained in the use of firearms and the effects of gunfire and ammunition.   The Warren Commission lawyers, on the other hand, must have known absolutely nothing about ballistics! Their expertise in weaponry consisted of words, oratory, and documents.  Yet, on the second page of this memorandum, we encounter this incredible passage:

A “personal remark made on the spur of the moment”

It is abundantly clear that the FBI and Secret Service scoffed at the idea of one bullet going through Kennedy and causing five different wounds to John Connally.  As “one unidentified Warren Commission staff member” quietly spoke about an “outside” possibility of this having been the case, Gauthier and Kelly characterized this scenario as “ridiculous”, where any bullet would have gone “wild” in its trajectory.  Never mind that Connally had more bullet fragments in him than could have come off of CE399.  Was Gauthier subtly telling us who was really responsible for making up the SBT? Perhaps to document this charade for posterity?  Bear in mind that Arlen Specter, who was later credited with creating the Single Bullet Theory,  was not even at this meeting! (at least not officially) This “personal remark”, made by an unnamed assistant counsel, happens to be the “theory” which was seared into history by the Warren Commission!

But wait! Was there anyone in the Warren Commission who was interested in the truth?  You bet – this one is even better!  See Zapruder viewing by Eisenberg, page 67 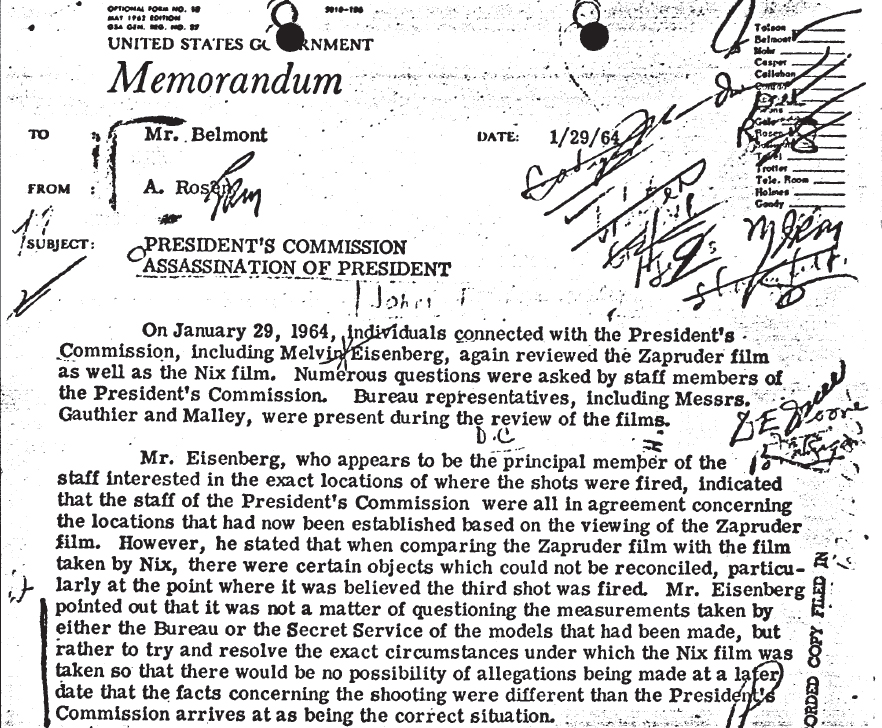 Eisenberg apparently was unconvinced and suspicious of what his cohorts were trying to scheme (they succeeded).   Two days later, 1/29/64, he was brought in for a second viewing of the films.  This memo shows how the FBI reacted to Eisenberg’s reluctance to go along with the SBT.  It was kicked up the chain of command, so let’s briefly identify the players:

Alan Rosen – Assistant Director, FBI, and author of the memo.

For this meeting, Shanyfelt was replaced with Jim Malley, and the result was reported up the ladder to Belmont via Rosen, with Belmont having Hoover’s ear as his top lieutenant.   The reader should immediately notice the compartmentalization shown here by the FBI, not unlike the Paul Cicero character played by Paul Sorvino in the mafia movie “Good Fellas”.

Returning to our discussion of the passage shown above, it tells us all we need to know.  “Eisenberg…appeared to be the principal member of the staff interested in the exact locations of where the shots were fired“.     Eisenberg appears to have been quite troubled by how Earl Warren and Alfred Goldberg were trying to re-write history, and  somebody made sure it was documented.   But there is another important issue which is raised by this memo.  Eisenberg rightfully pointed out discrepancies between the Z and Nix films.: “there were certain objects which could not be reconciled, particularly at the point where it was believed the third shot was fired.”  (note: despite all the tampering to both films, even today, we are able to discern inconsistencies between the two.) So as early as January 1964, the Warren Commission attorneys working for Earl Warren knew that the truth was being suppressed.   With the exception of Eisenberg, they appear to have actively participated in covering up the assassination of John Kennedy.  And, of course, the Single Bullet Theory  later found its official sponsor in Arlen Specter, whose pact with the devil enabled him to rise all the way to the top as a U.S. Senator for Pennsylvania.

But what does this say about the Secret Service and the FBI, both of whom sat idly and allowed Ball, Redlich, and Belin to propose and endorse this abomination?   Clearly, in this case, politics did not make strange bedfellows – partners in crime did.