[Author’s note: This material was presented this weekend, 4-7 April 2019, at the JFK Historical Group Conference ]

This past February, I literally stumbled across a Journal/Diary/Calendar of someone very important in the April 26, 2018 document dump of ARRB documents.  (To date, this has been the latest document release).

The pdf file lacked the proper cover page which would have identified it.  It appears to never have been examined and classified accordingly by the ARRB, and had merely been tagged with NARA number 104-10306-10000. Furthermore, it was not properly indexed, which is why it flew under the radar at Maryferrell.org.  Another reason the file was practically impossible to find has to do with the format of the entries, which are in cursive writing or script.  The only way to find it would have been by opening and reading each of the close to 20,000 files which were released – the proverbial needle in the haystack.

The journal consists of 97 pages which cover roughly 102 days of the year 1963.  It reveals a life of privilege and exclusivity, of black tie affairs and banquets, private jets and golf courses, and most importantly, access and interaction with those in control of the United States Government, intelligence agencies and the military.

A careful study and cross referencing of other memorandum has allowed the identification of Director of Central Intelligence John McCone as the owner and author of the journal. The document also reveals the frequency with which he met with underlings and lieutenants, as well as other people involved in private meetings with President Kennedy, shedding light on the identities of this so very important inner circle of decision makers. 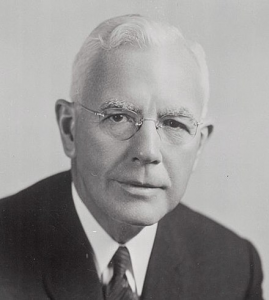 There are numerous entries which describe meetings with “The President”.  Let’s begin with this one dated 19 July 1963: 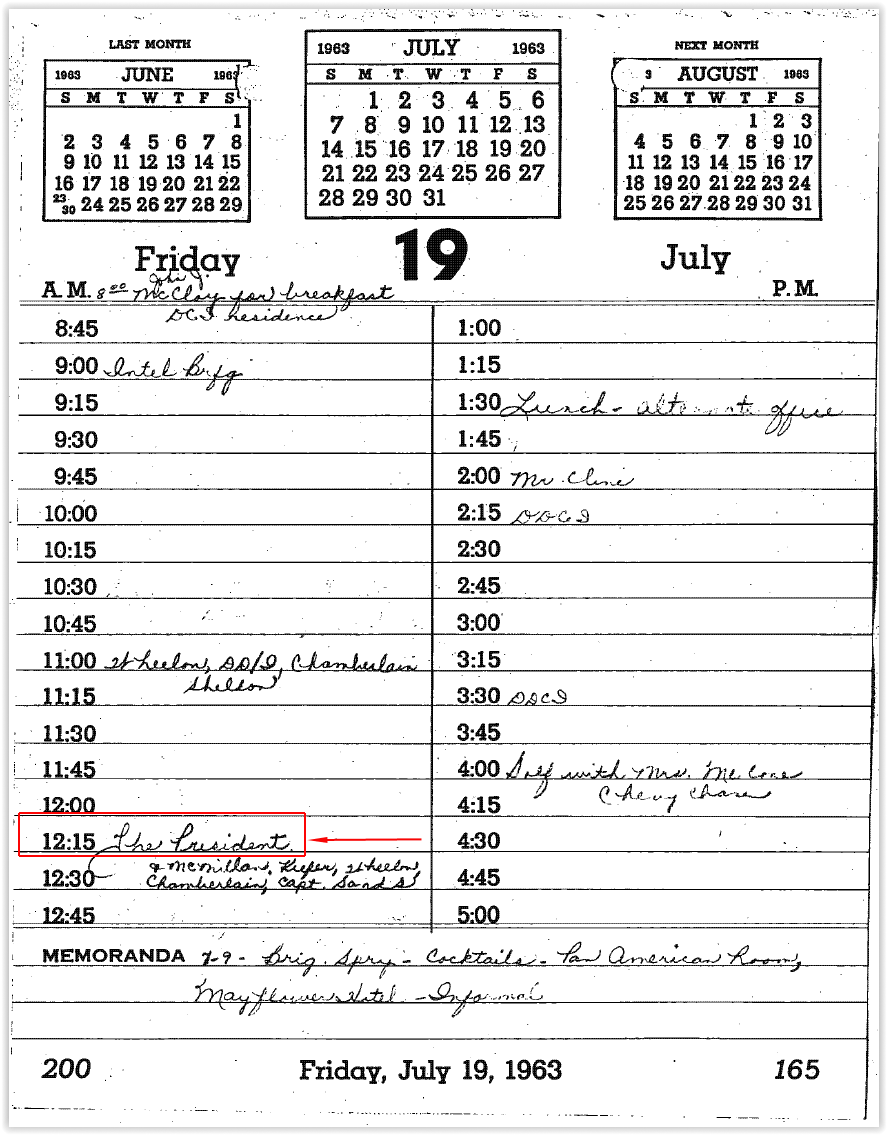 This 19 July 1963 meeting at 12:15PM with the President was documented by a “MEMORANDUM FOR THE RECORD” found in McCone’s papers, also recently released:

The subject matter of these meetings puts the reader right in the middle of the tug of war being played out by the Soviet Union and the United States over Cuba which could have resulted in a thermonuclear event. Not surprisingly, the other topics covered in these meetings have to do with South Vietnam policy.  This one, just one week before the coup of 1 November 1963.

Here is the MEMORANDUM FOR THE RECORD which documents this 25 October 1963 meeting with the President which included John McCone, McGeorge Bundy, Robert Kennedy and Robert McNamara. 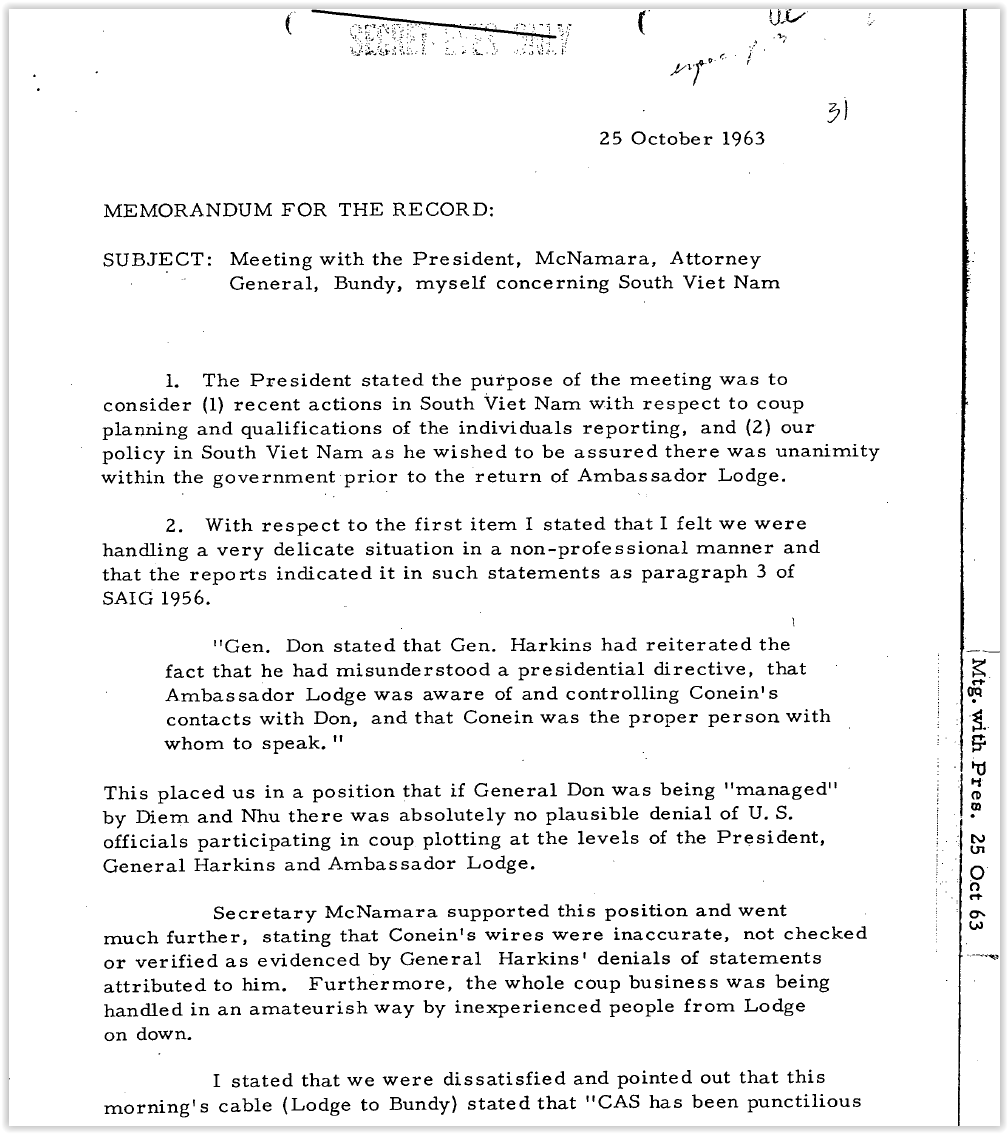 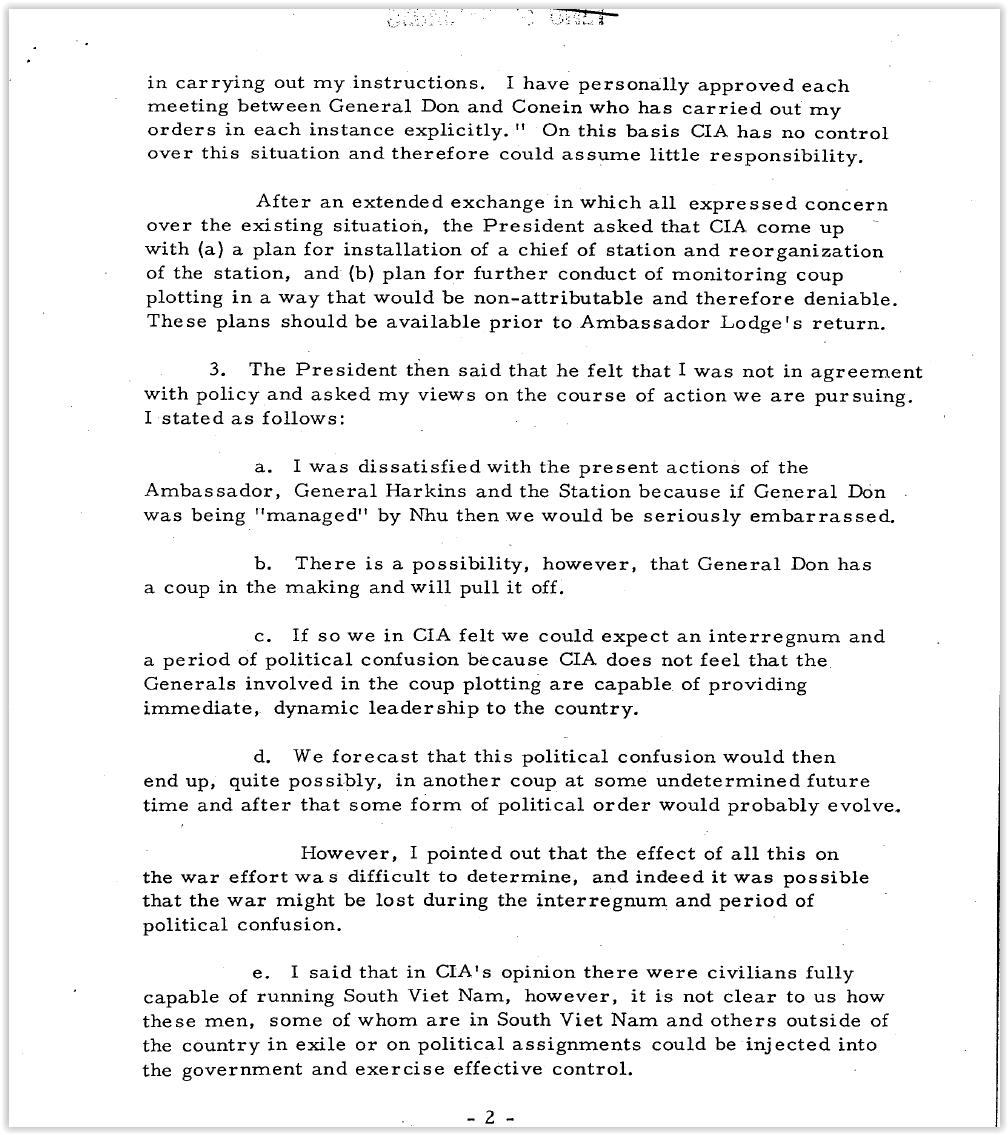 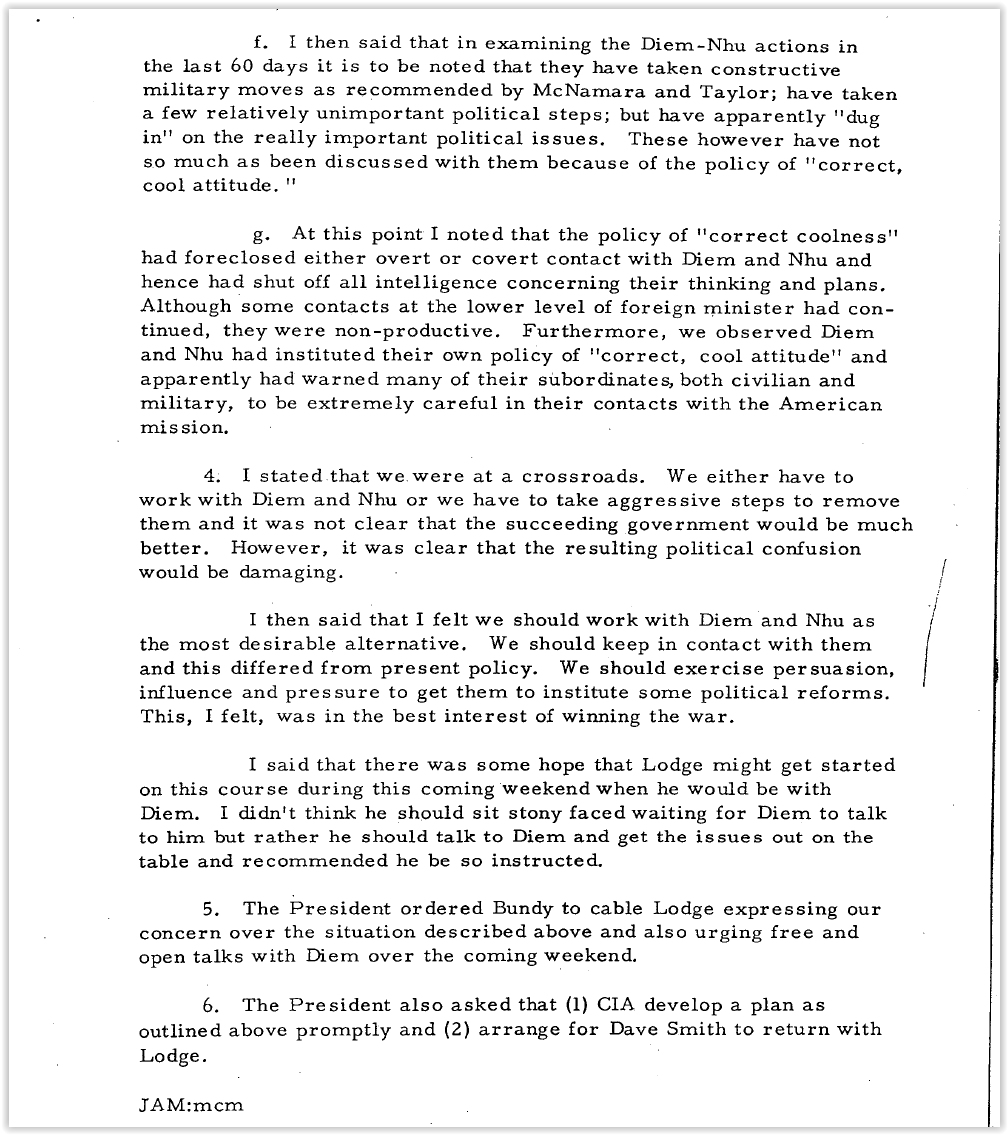 Not surprisingly, the month of November 1963 is missing 16 days. 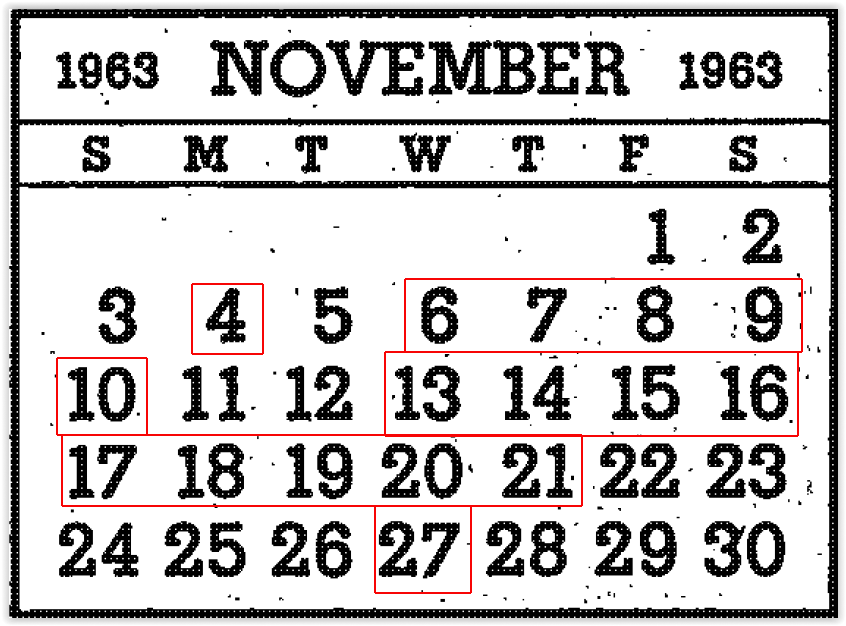 Leading up to 22 November 1963,  these are the entries in John McCone’s journal: 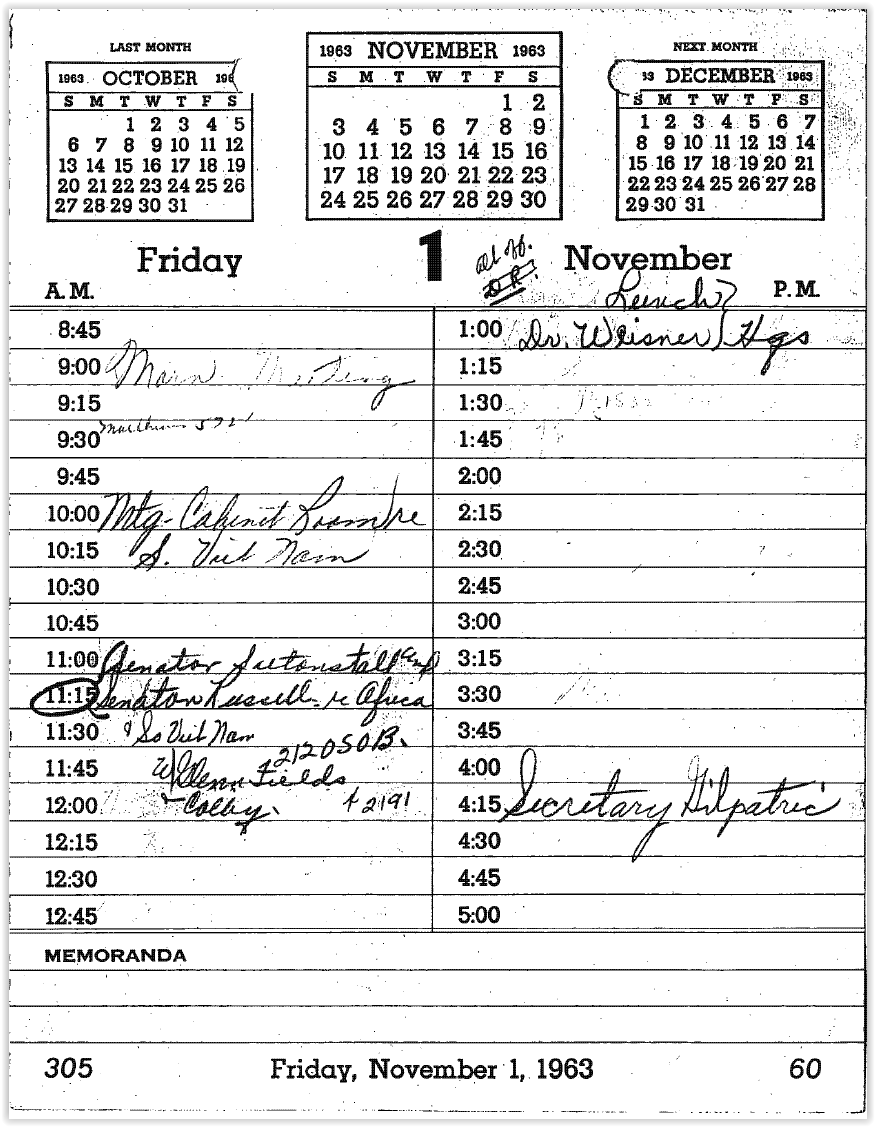 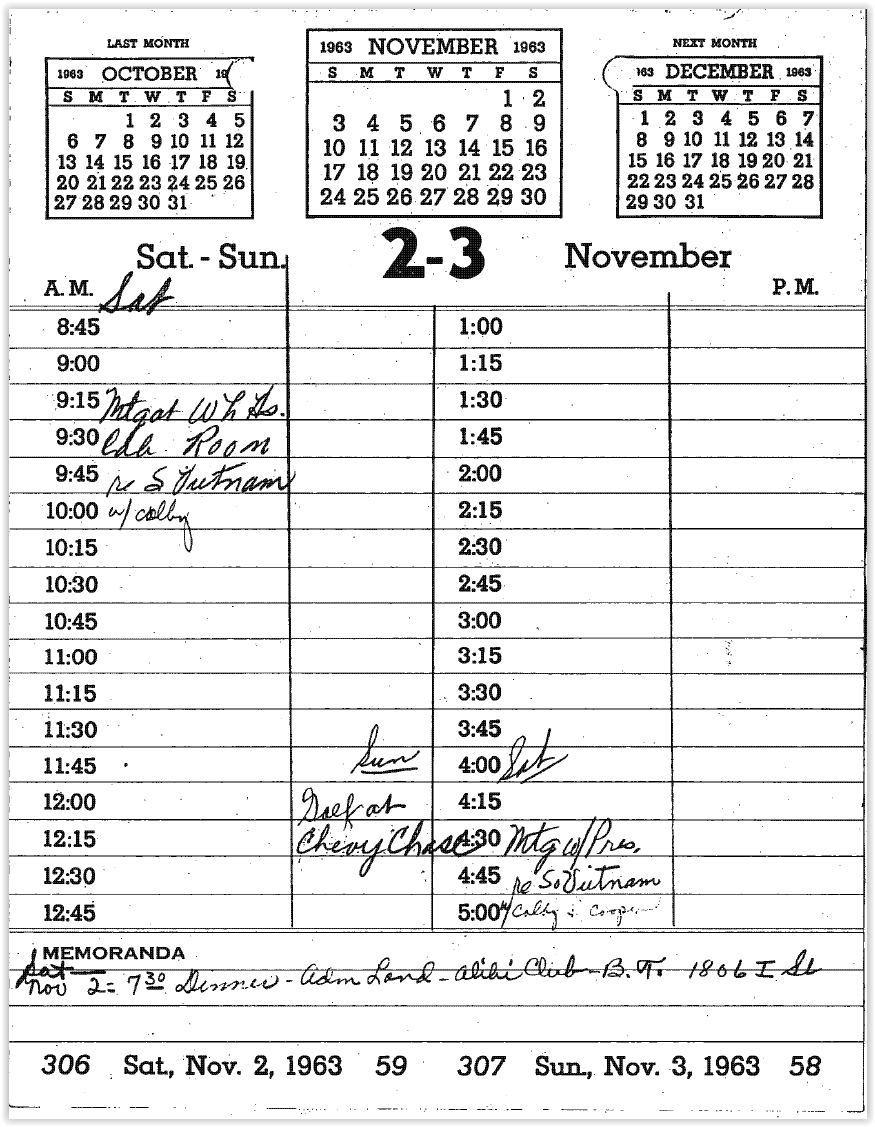 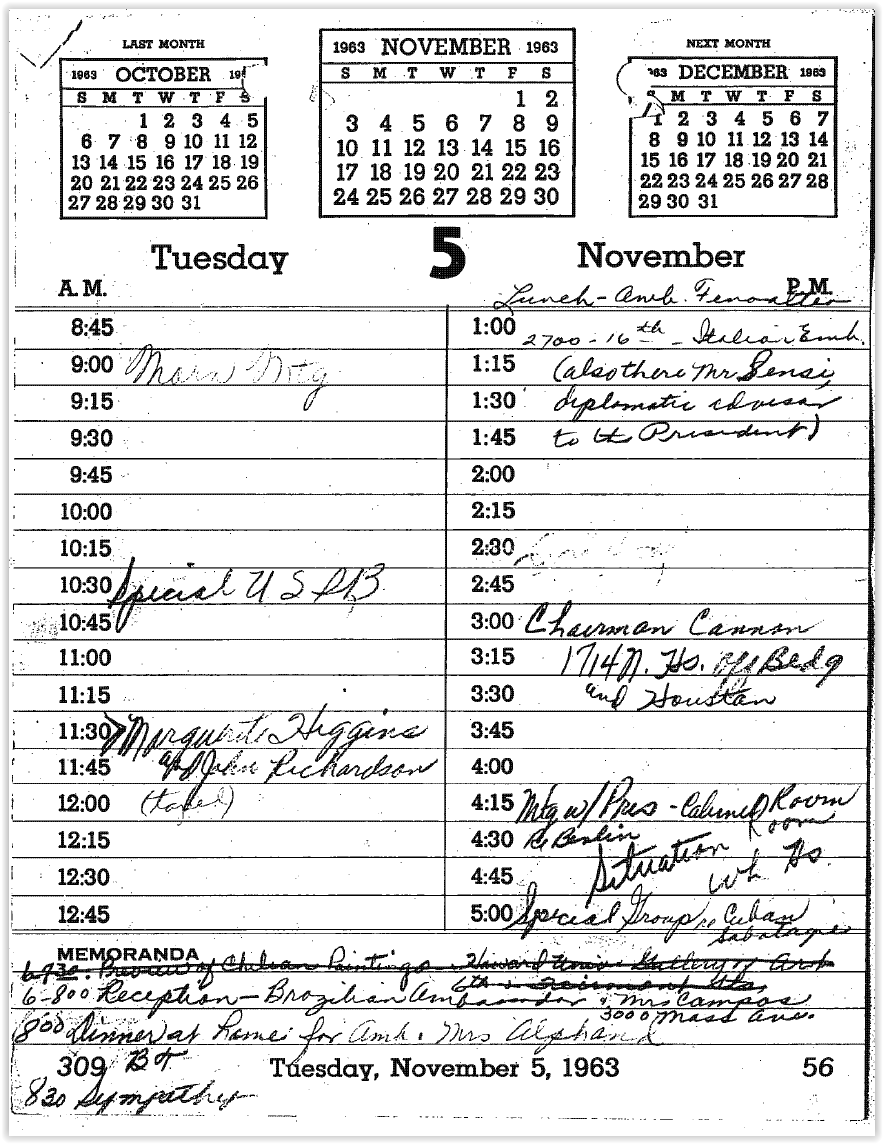 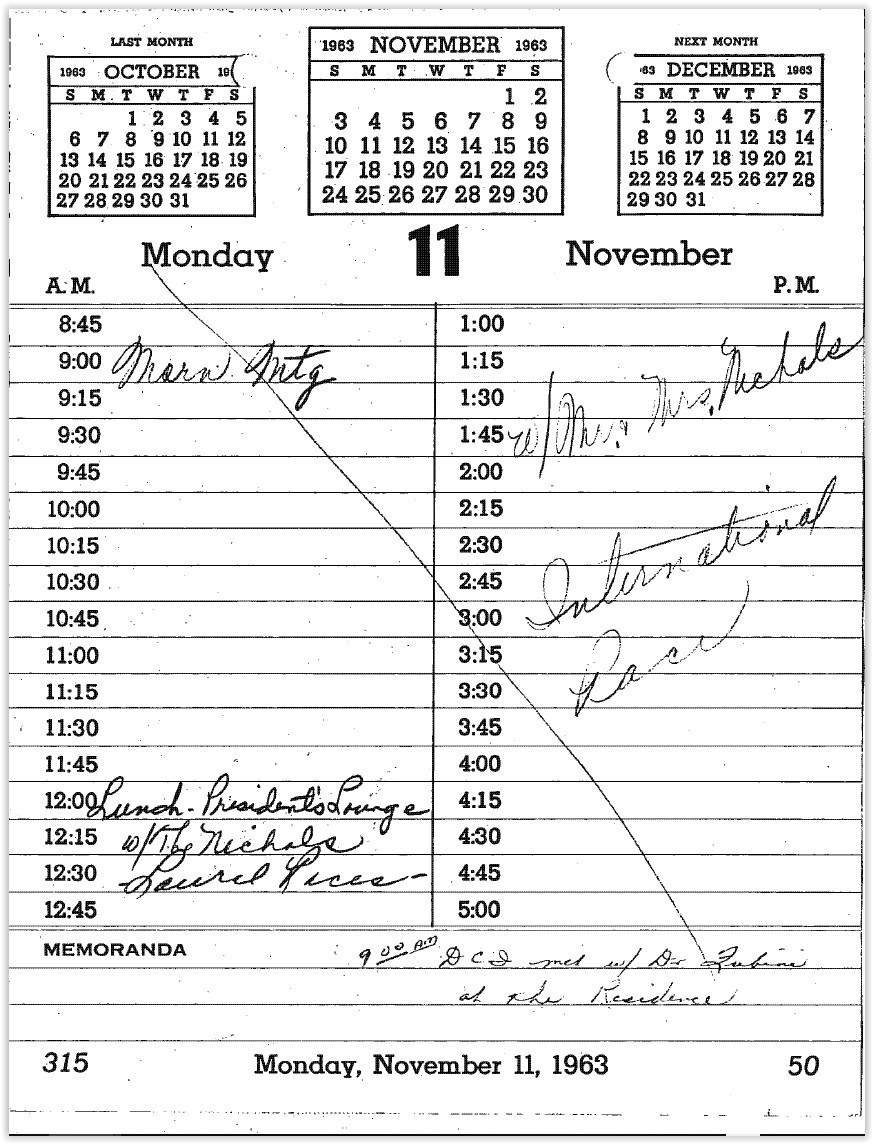 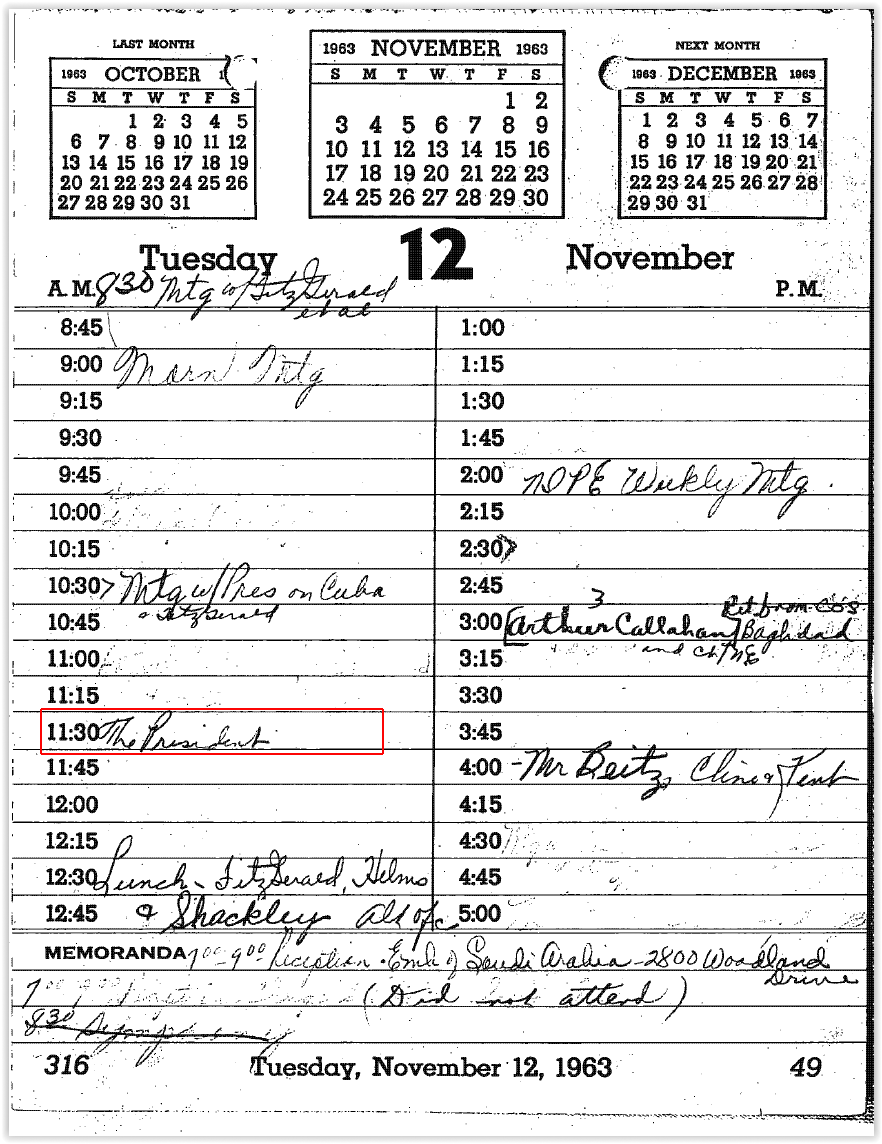 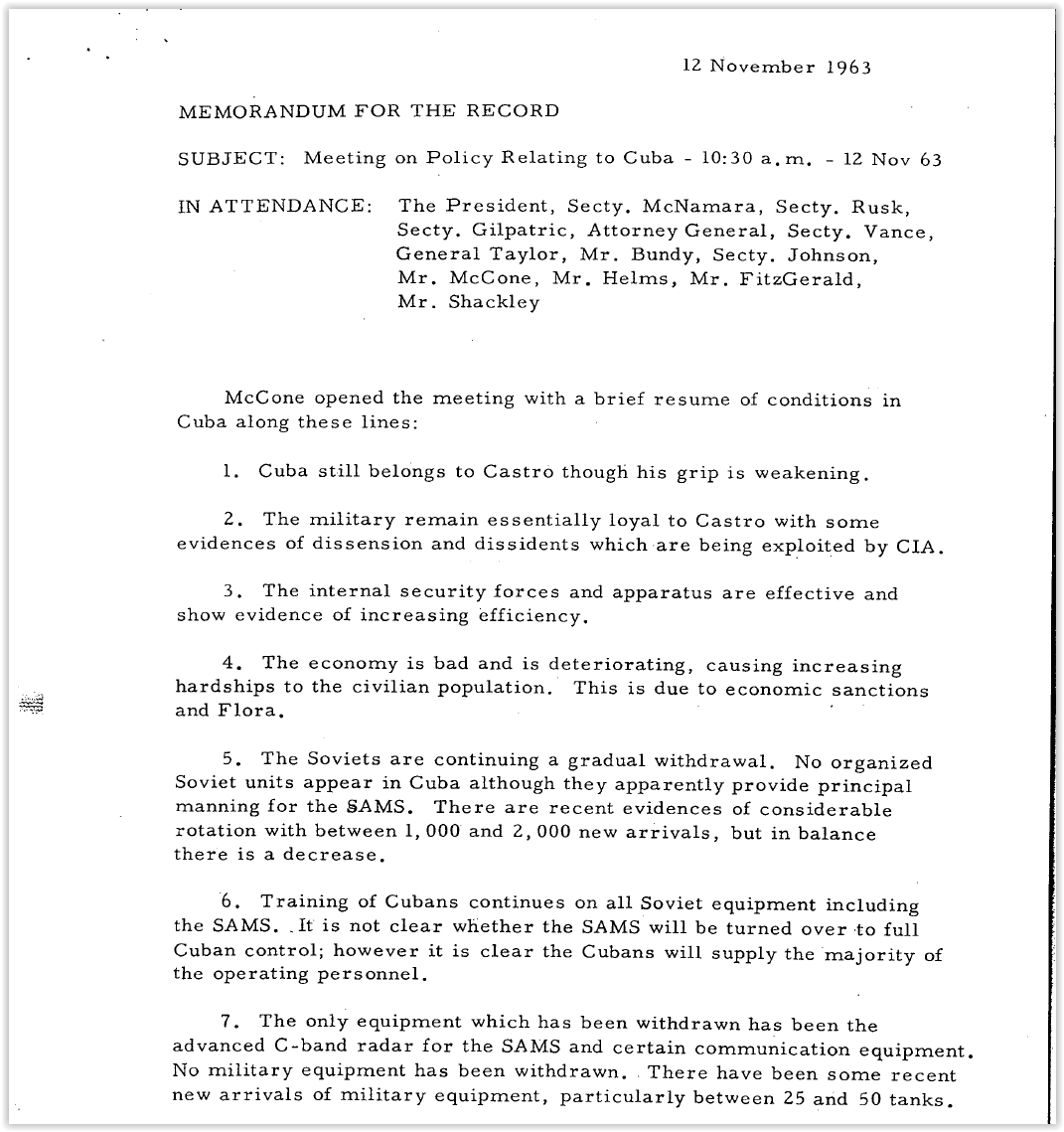 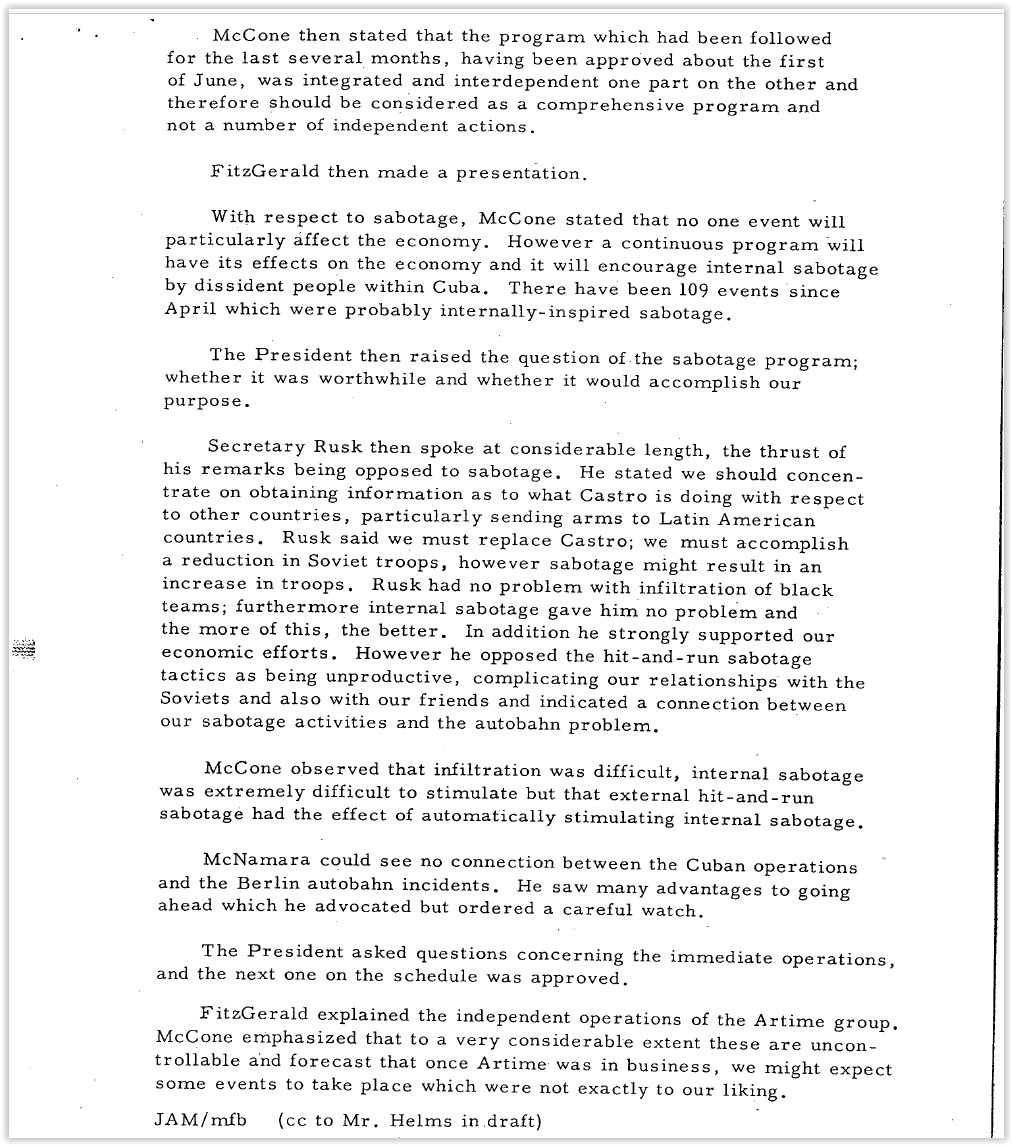 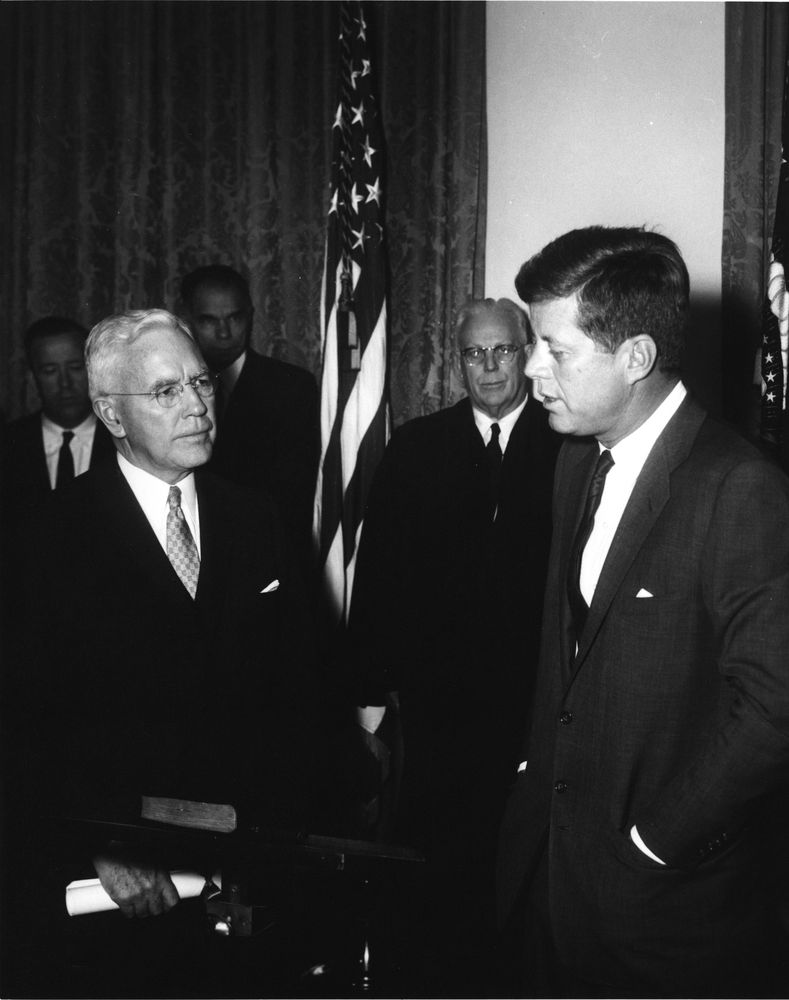 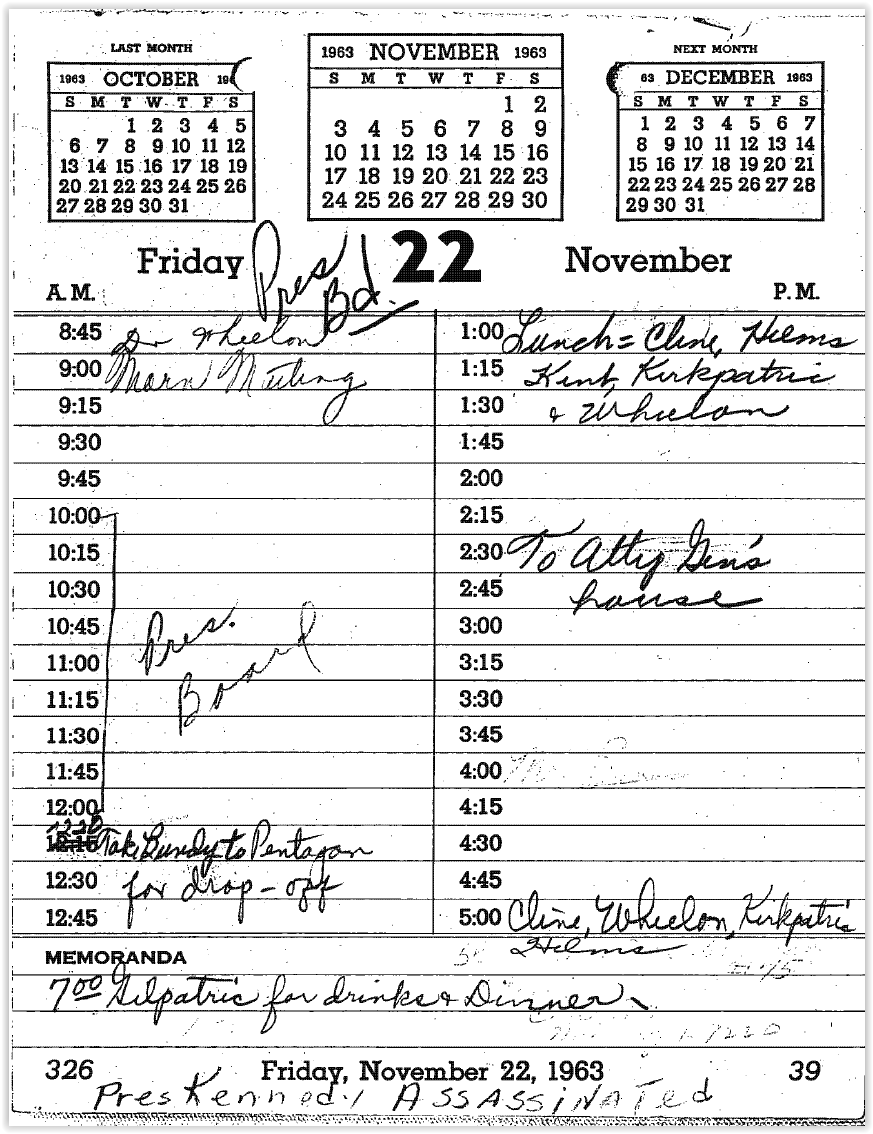 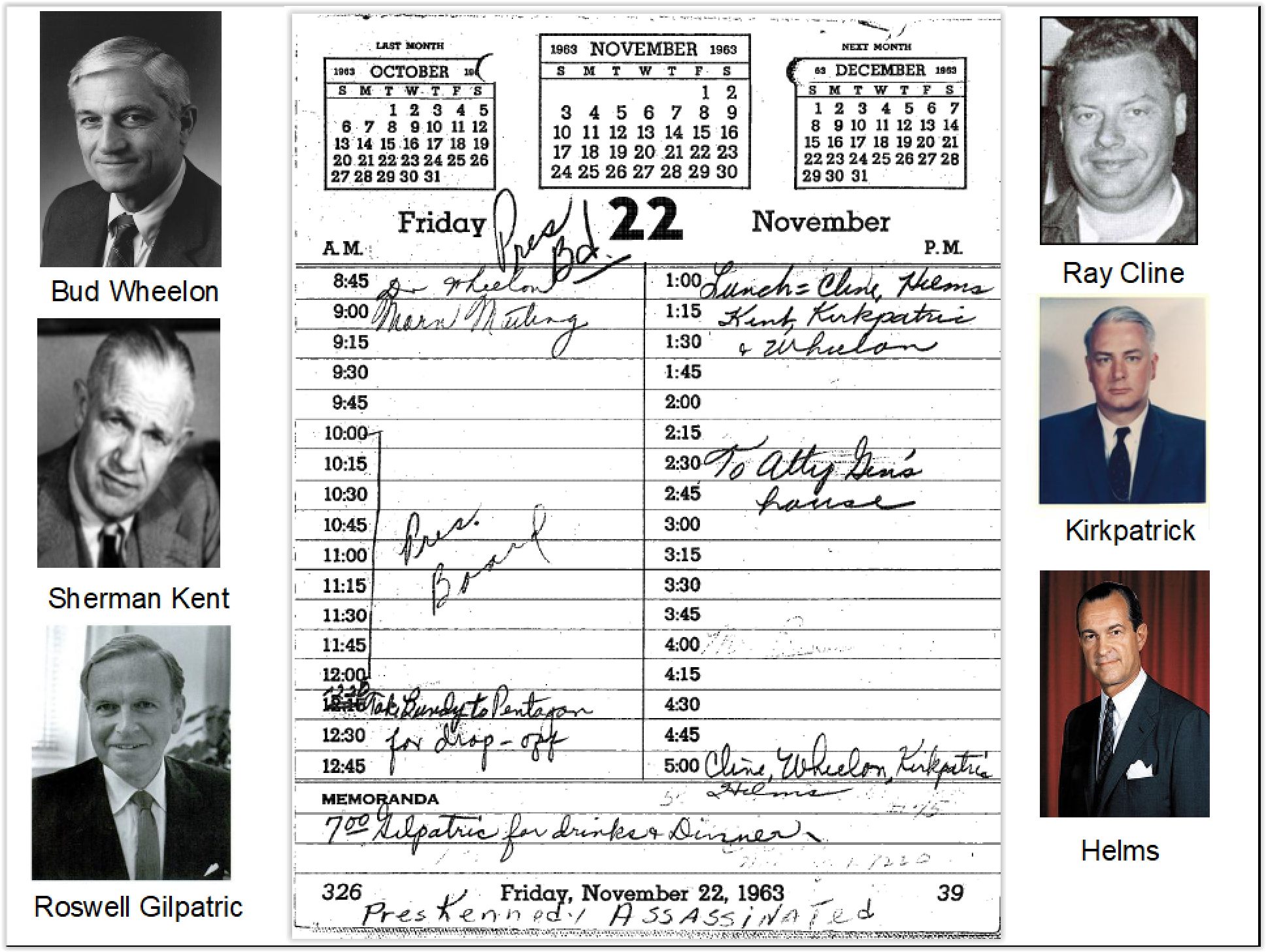 Who were these guys? (Note: these are from various sources on the Internet)

Bud Wheelon: Wheelon began working at the CIA in 1962, serving as its first deputy director for science and technology. He was promoted to director the following year, a post he held until 1966. During his tenure, Wheelon was responsible for the agency’s high-altitude U-2 reconnaissance operations—including flights during the Cuban Missile Crisis—and for the development of the U-2’s successors, the A-12 Oxcart and the SR-71 Blackbird. He also led the development of the first spy satellites, code-named “Corona” but better known as the “Keyhole” series, which took high-resolution photographs on specially made 70-millimeter film that was parachuted back to Earth to be processed.

Roswell Gilpatric: was a prominent New York City corporate attorney and government official who served as Deputy Secretary of Defense from 1961–64, when he played a pivotal role in the high-stake strategies of the Cuban Missile Crisis, advising President John F. Kennedy as well as Robert McNamara and McGeorge Bundy on dealing with the Russian nuclear missile threat. Gilpatric later served as Chairman of the Task Force on Nuclear Proliferation in 1964.  Here is a brief history: 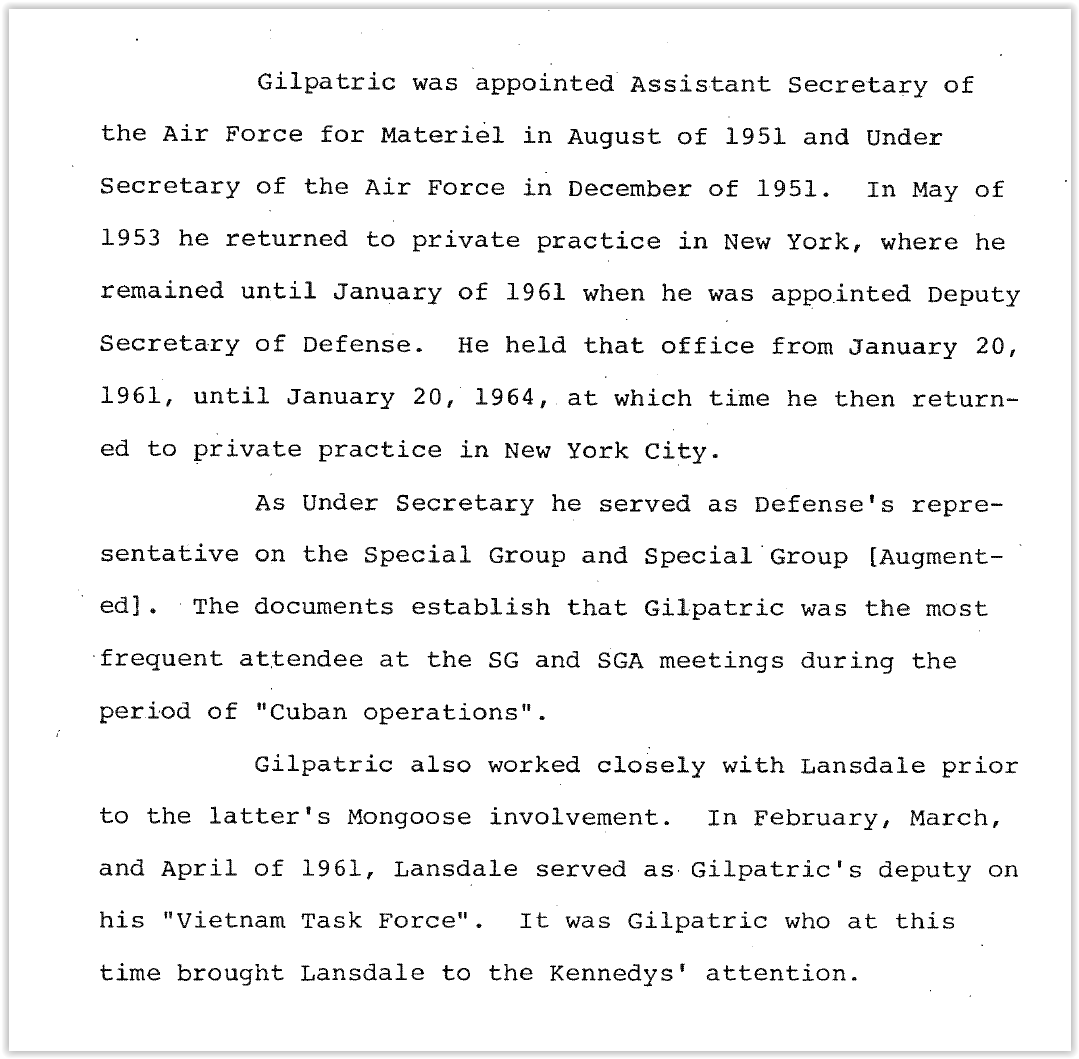 Ray Cline: Ray Steiner Cline was born in 1919. He studied at Harvard University before joining the Office of Strategic Services during the Second World War. In 1944 he was appointed as Chief of Current Intelligence. Later he was sent to China where he worked with John K. Singlaub, Richard Helms, E. Howard Hunt, Mitchell WerBell, Paul Helliwell, Robert Emmett Johnson and Lucien Conein. Others working in China at that time included Tommy Corcoran, Whiting Willauer and William Pawley.

In 1946 Cline was assigned to the Operations Division of the War Department General Staff to write its history. Cline joined the Central Intelligence Bureau in 1949 and eventually became Chief of the Office of National Estimates. He also served in Britain (1951-53) under Brigadier General Thomas Betts. Cline became Chief of station in Taiwan in 1957. A post he held for over four years.

In 1962 Cline was appointed as Deputy Director for Intelligence for the CIA. He became disillusioned with Lyndon B. Johnson and he requested a move from Washington. In 1966 Richard Helms managed to arrange for Clines to become Special Coordinator and Adviser to the Ambassador in the U.S. Embassy in Bonn. From 1969 until his retirement in 1973, he was Director of the Bureau of Intelligence and Research at the Department of State during the Richard Nixon administration.

Cline played an important role in the forming of right-wing organizations such as the World Anti-Communist League and its U.S. chapter, the U.S. Council for World Freedom.

Lyman Kirkpatrick: A veteran of the Office of Strategic Services (OSS), Kirkpatrick joined CIA when it was created in 1947. He served as a division chief and as executive assistant to a very demanding CIA Director, Walter Bedell Smith. Kirkpatrick was a man with a privileged past and a bright future—until he contracted polio while on a tour of Asia. He had played football at Princeton and survived air raids and artillery and machine-gun fire during World War II. He was, in his own words, “disdainful of the damage that could be done by a disease.” As the 36-year-old intelligence officer lay, helpless, in his hospital bed, he felt almost overwhelmed by the lack of knowledge about what his new future held for him.

On his return to work, Kirkpatrick found that the career path he had set for himself was now blocked—less because of his own self-doubt than the doubts of others about his ability to handle the workload. Although he wouldn’t be able to advance in the clandestine service as he originally intended, the Agency did accommodate his disability, and he retained posts at the top of the CIA hierarchy for the next 12 years.

His performance earned him the National Civil Service Award and the President’s Award for Distinguished Federal Civilian Service. In tribute to his willingness to take independent and sometimes unpopular stances, his staff nicknamed him “Hell on Wheels.” He had an incredible impact on the evolution of the Agency.

Richard Helms: Future DCI. During the Kennedy presidency, Dulles selected Helms to testify before Congress on Soviet-made forgeries. Following the 1961 Bay of Pigs fiasco, President Kennedy appointed John McCone as the new DCI, and Helms then became the DDP. Helms was assigned to manage the CIA’s role in Kennedy’s multi-agency effort to dislodge Castro. During the Cuban Missile Crisis, while McCone sat with the President and his cabinet at the White House, Helms in the background supported McCone’s significant contributions to the strategic discussions. After the 1963 coup in South Vietnam, Helms was privy to Kennedy’s anguish over the killing of President Diem. A month later Kennedy was assassinated. Helms eventually worked to manage the CIA’s complicated response during its subsequent investigation by the Warren Commission.

So what was McCone up to on 22 November 1963??? It says here that he began the day seeing Assistant Director/Scientific intelligence Albert “Bud” Wheelon at 8:45AM. At 9AM, he had his usual morning meeting. From 10AM to 12PM noon he attended a “President’s Board” (President’s Board of Consultants on Foreign Intelligence) meeting. At 12:20, (11:20AM Dallas time) he drove McGeorge Bundy to the Pentagon for drop-off. 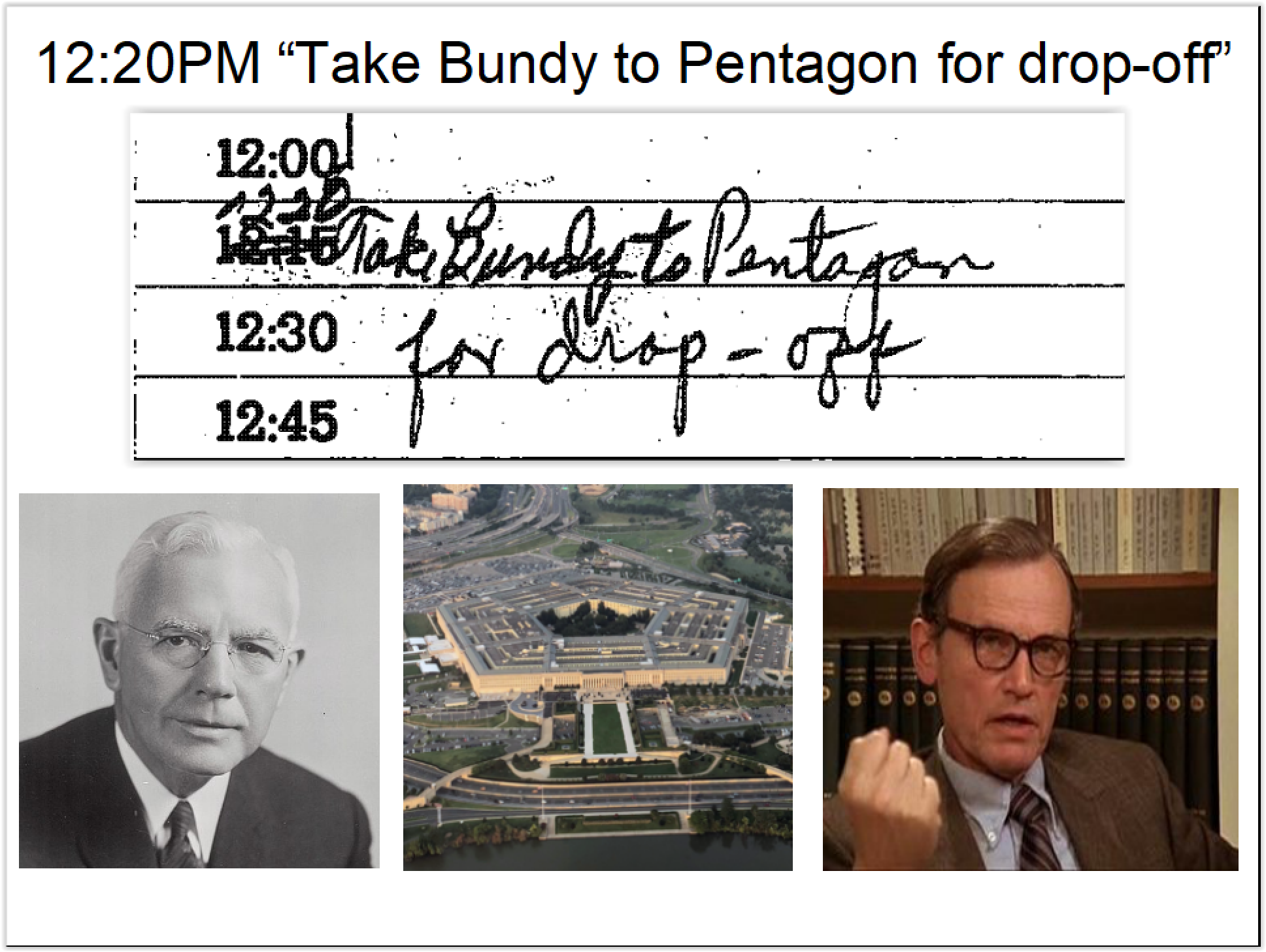 Then, at 1PM (12PM Dallas time), he had lunch with Deputy Director of Intelligence Ray Cline, Richard Helms, “Bud” Wheelon,  Sherman Kent, and CIA Inspector General Lyman Kirkpatrick. At 2:30 PM (1:30PM Dallas time) he visited Robert Kennedy at his house to offer his condolences over the assassination of his brother. While the nation and world were still trying to understand the events of the day, he had another meeting at 5PM with Ray Cline, Bud Wheelon, Lyman Kirkpatrick and Richard Helms. Finally, at 7PM he met Deputy Secretary of Defense Roswell Gilpatric for drinks and dinner! 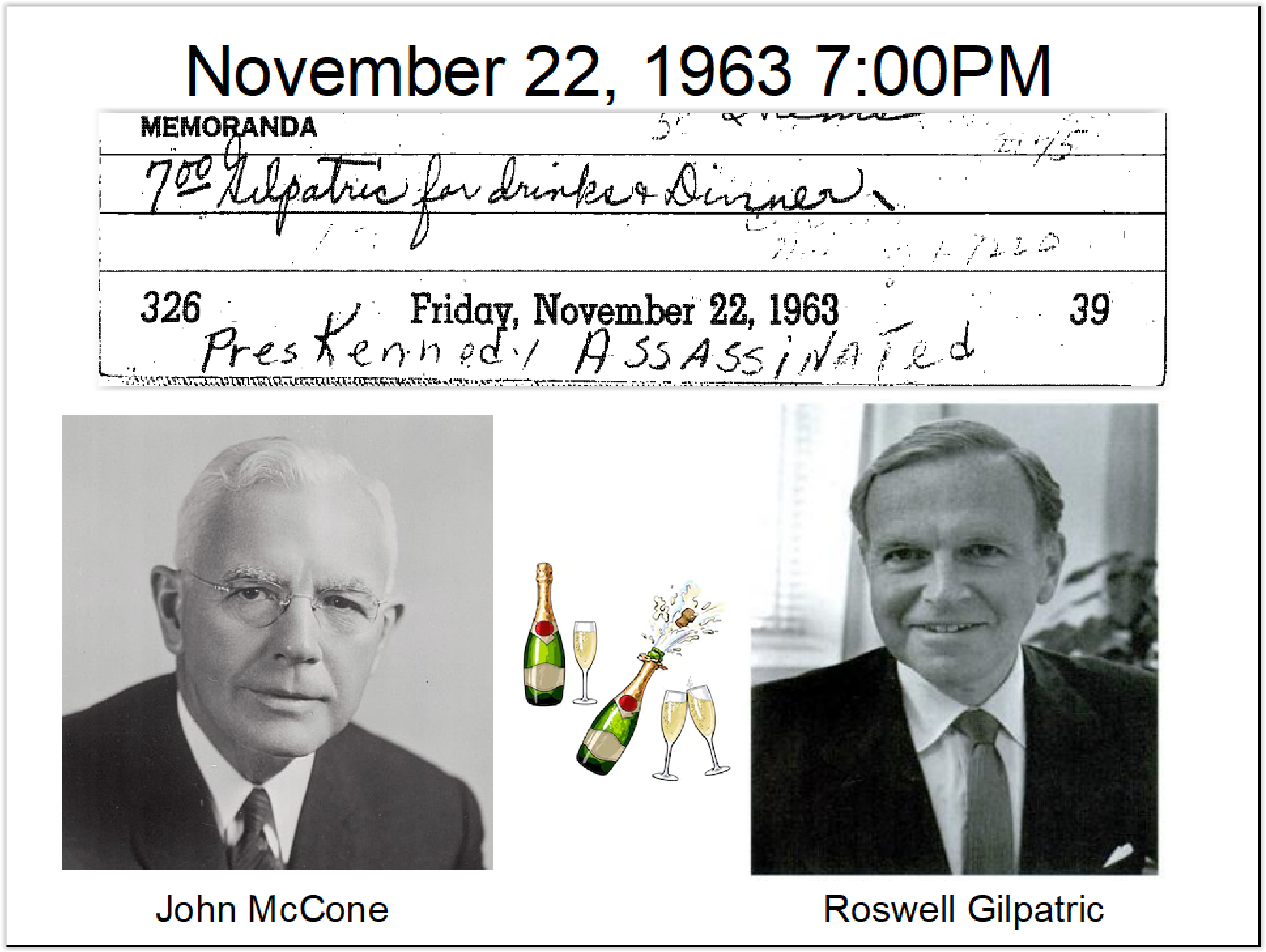 The weekend of the assassination also contains interesting entries which are also supported by MEMORANDUMS FOR THE RECORD documents: 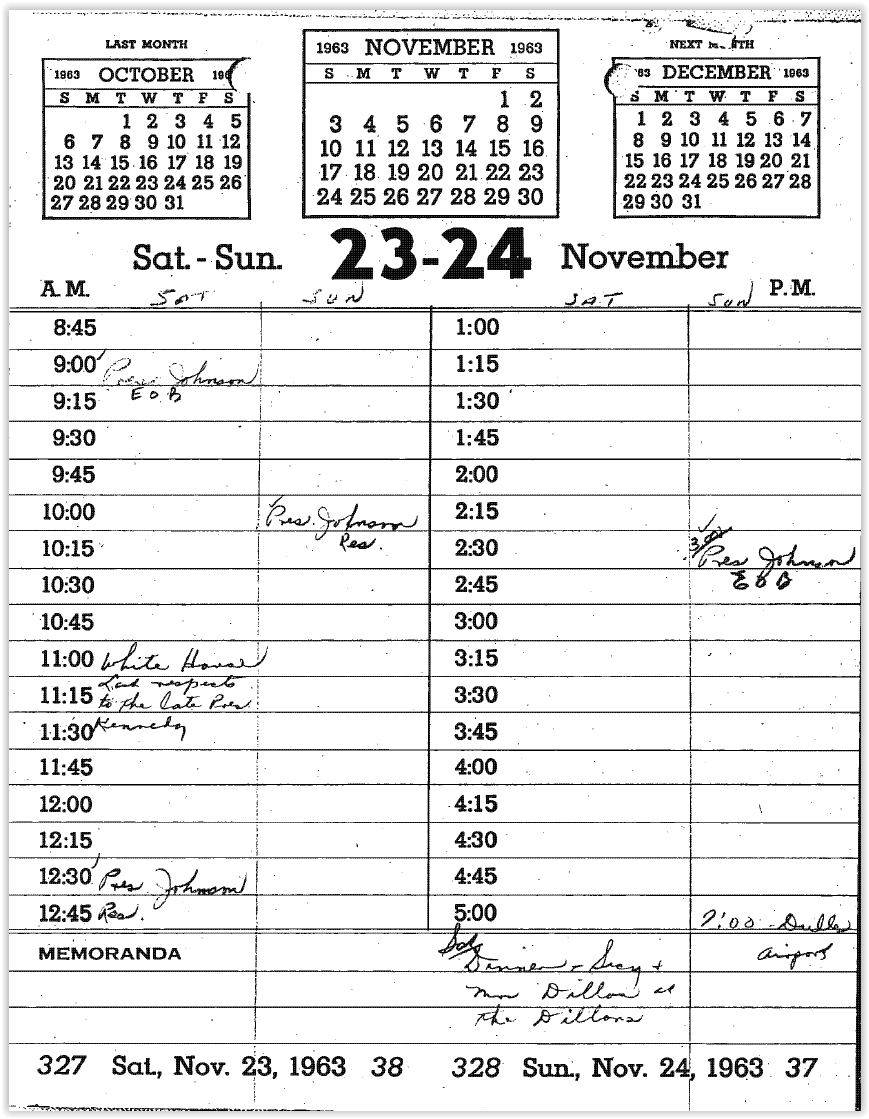 This one reveals how close LJB and McCone had actually been in the past: 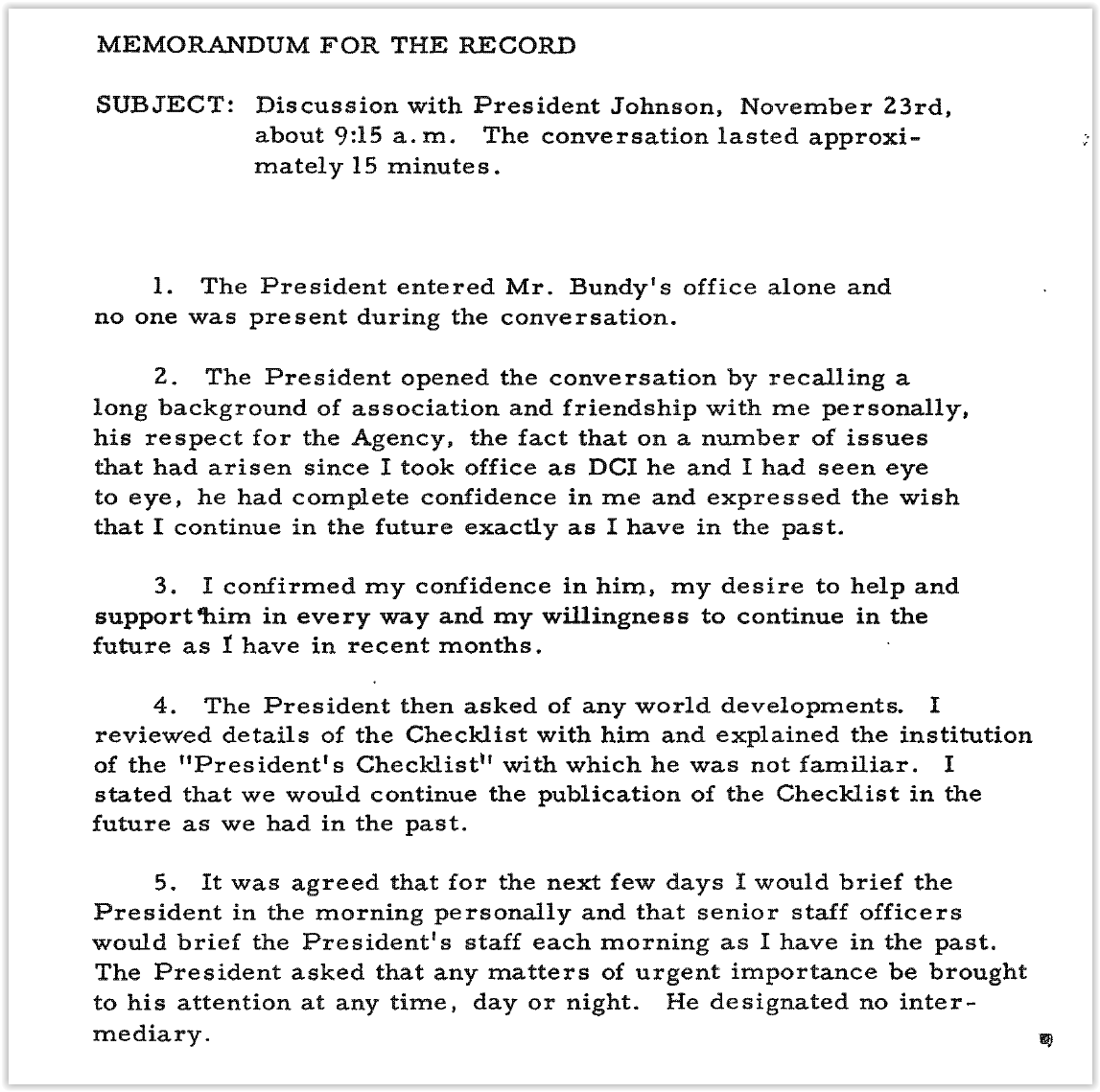 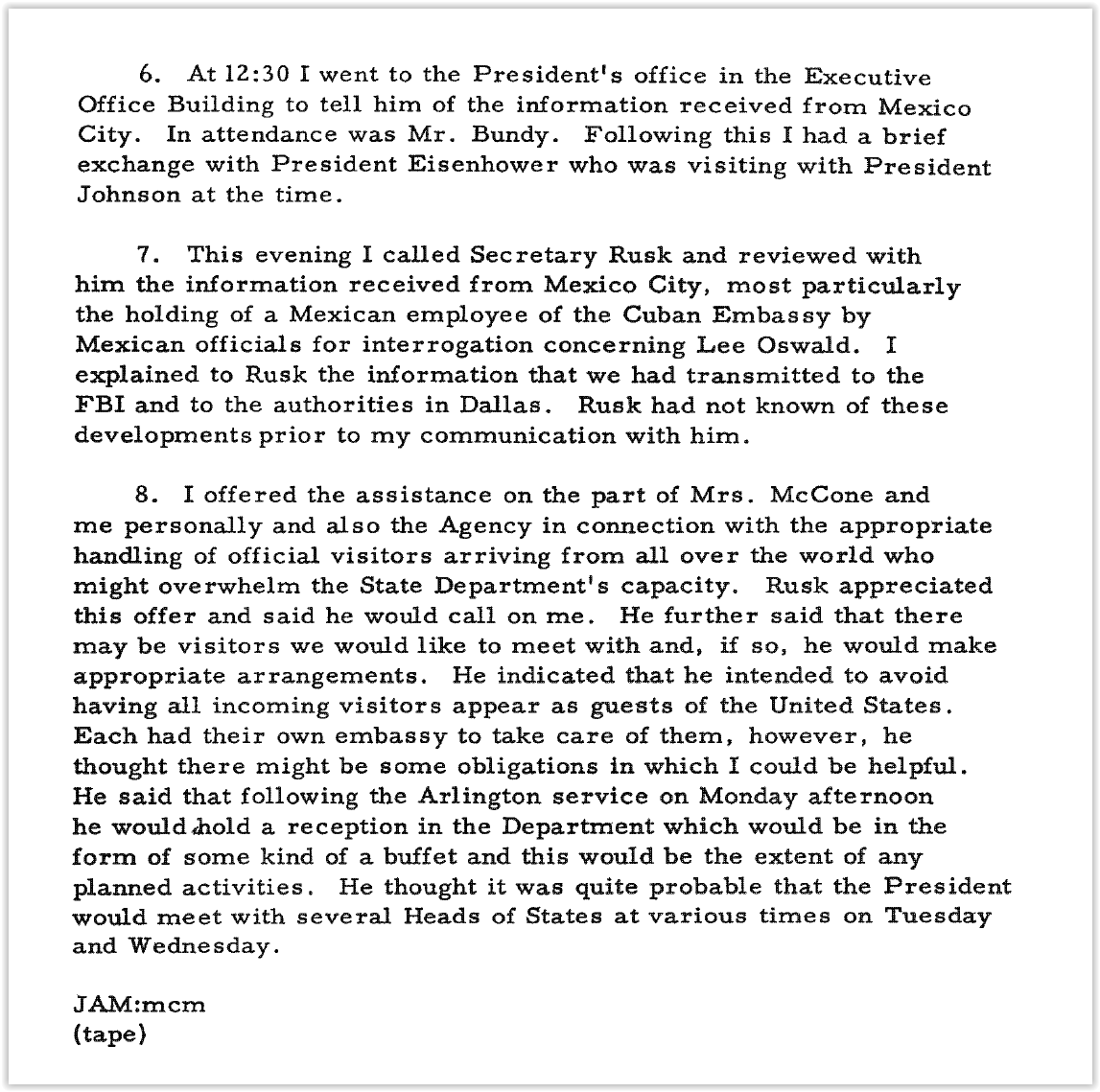 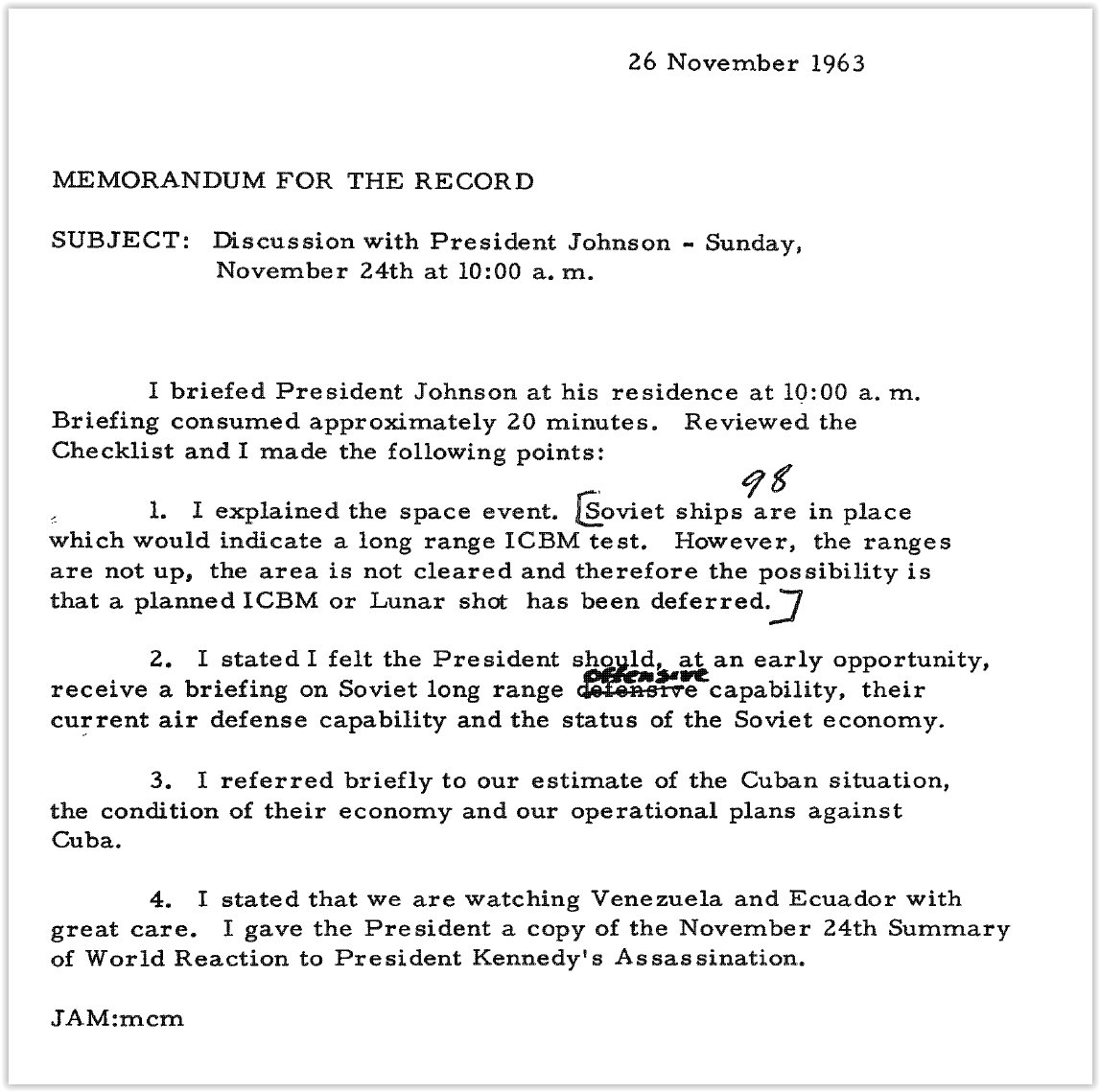 But one of the most interesting entries happens to be a personal one-on-one meeting between McCone and the new President, Lyndon Baines Johnson on Tuesday, 26 November 1963. The MEMORANDUM FOR THE RECORD written by McCone for this journal entry documents how LBJ actively intervened with Katharine Graham, owner of the Washington Post, to kill an editorial by Post Editor Al Friendly which called for an honest, independent and complete investigation into the assassination of President John Kennedy: 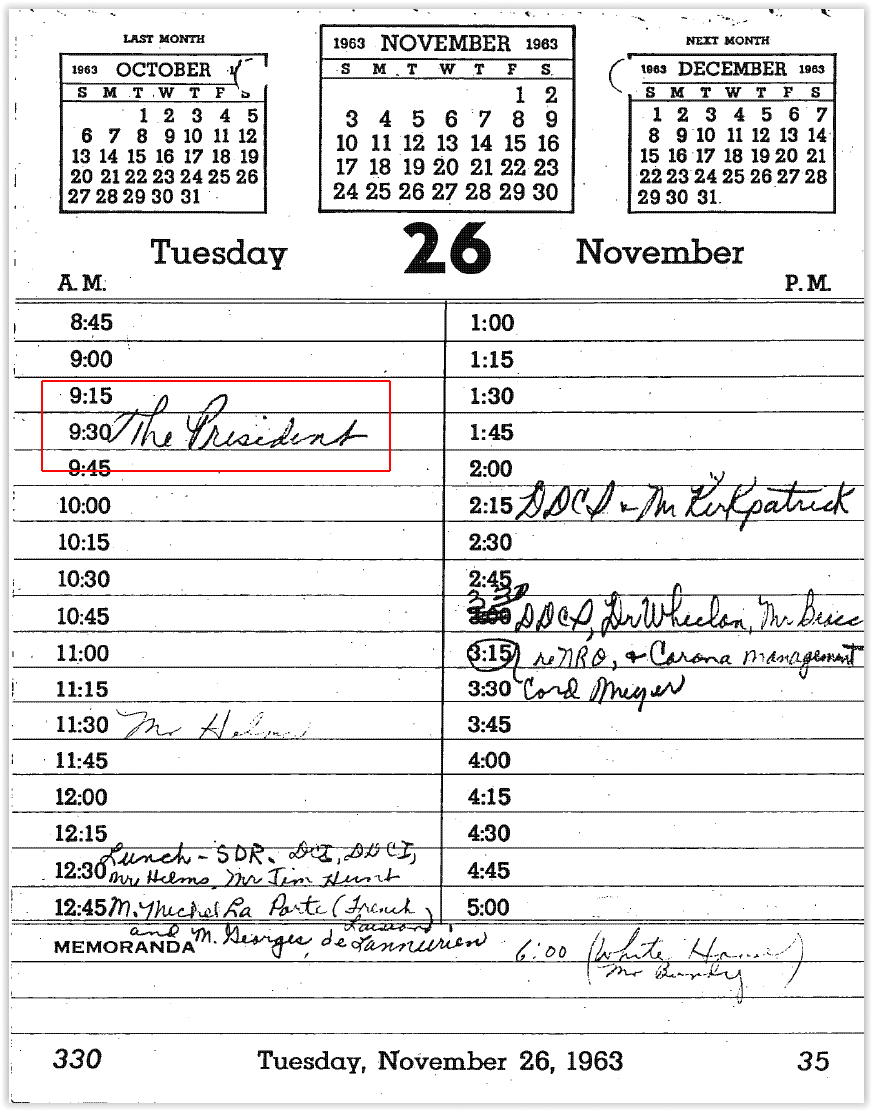 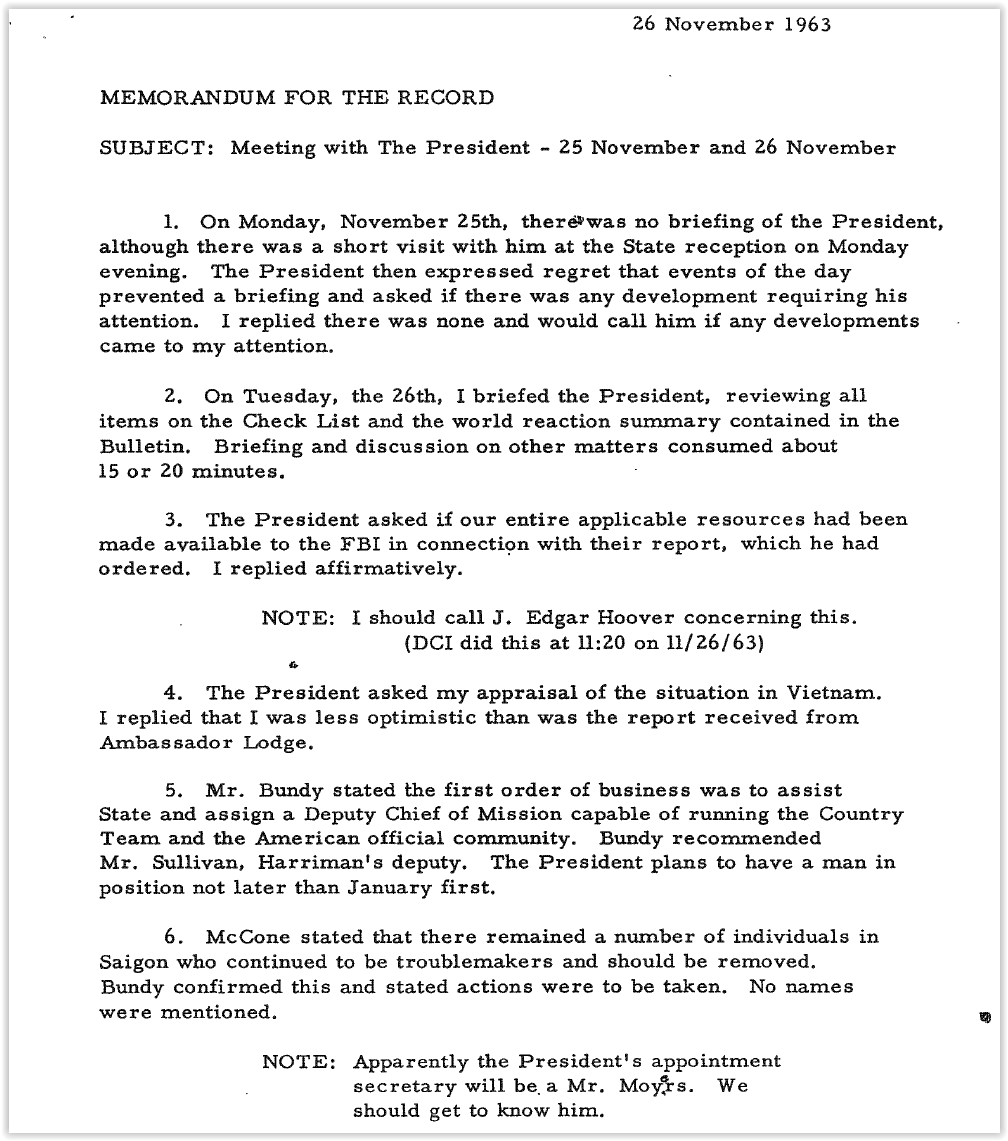 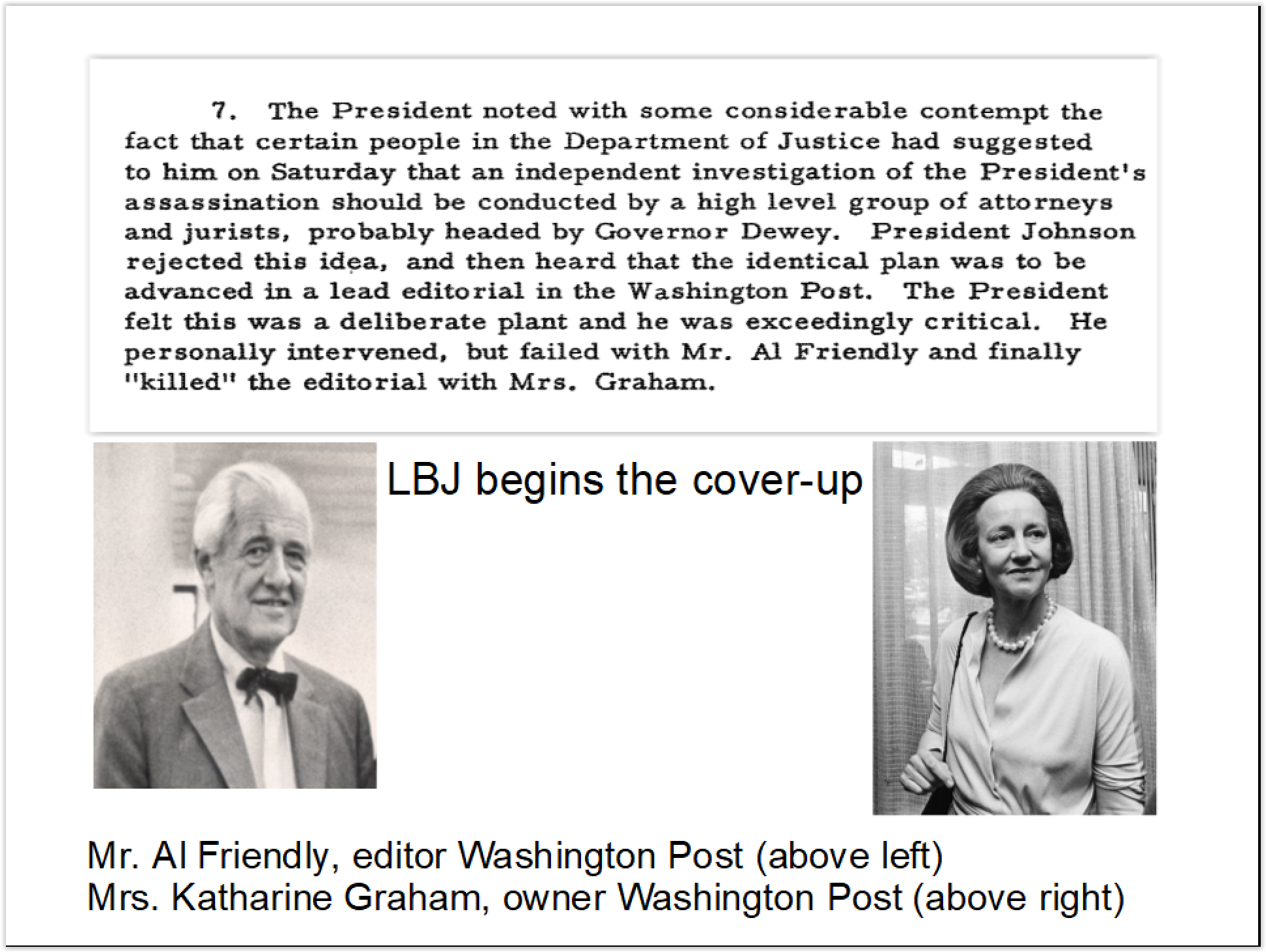 This virtually untapped historical record surely will yield many strands of investigation for people to study.  McCone’s attention to detail will clarify and perhaps allow historians to put names and faces on those responsible for the coup d’état of 1963.