Memorandum for the “Special Group – Augmented”

That is the title of another document which flew under the radar and was released as NARA 145-10001-10198 (DocID:32977071).   It shows the cold-blooded side of the Joint Chiefs of Staff (DOD/JCS) as they responded to a Chief of Operations for Operation Mongoose request laying out the logistics needed for a full-blown invasion of Cuba and neutralization of Fidel Castro.  The ultimate destination was the “Special Group – Augmented”. The entire playbook for the invasion is presented in excruciating detail.  The first paragraph of the paper reads:

“Consequences of U.S. Military intervention in Cuba to include cost (personnel,   units and equipment), effect on worldwide ability to react,  possibility of a requirement for a sustained occupation the level of national mobilization required, and Cuban counteraction.”

Words of this magnitude had probably not been expressed since World War II, in fact, within the document there is even a mention of “D-Day”!

As we all know, the juiciest NARA JFK ARRB documents were redacted and blacked or whited out when sensitive information had to be withheld. This particular document DOES HAVE REDACTIONS, however, they were done with a marker which allowed the information to be seen through the redaction!

Let’s take a closer look at the redactions: 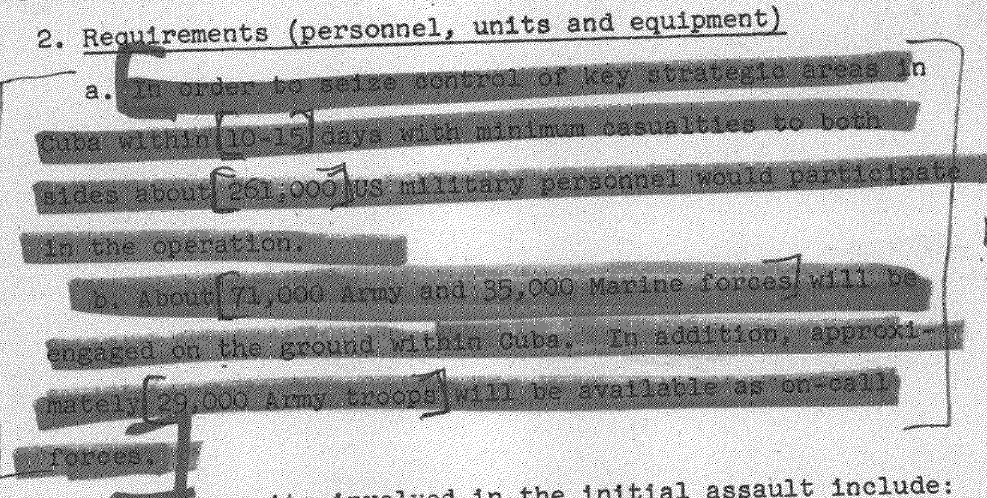 a. In order to seize control of key strategic areas in Cuba within 10-15 days with minimum casualties to both sides about 261,000 U.S. military personnel would participate in the operation.

b. About 71,000 Army and 35,000 Marine forces will be engaged on the ground within Cuba. In addition, approximately 29,000 Army troops will be available as on-call forces.

(2) Marines – Artillery units and armor (including about 85 tanks) plus some 320 supporting aircraft.

c.  Air Force – In order to land the maximum number of airborne troops in the minimum time fourteen Air Force Reserve troop carrier squadrons(C-119) were originally included in the airlift plan, however, CINCLANT and USAF have been requested to prepare alternate plans not involving any mobilization prior to D-day.  As a means of comparison, check out these actual WWII D-Day figures. [CINCLANT=Commander In Chief, Atlantic Fleet Headquarters]

a. When the assault forces have been committed to the Cuban operation, the strategic Army forces in CONUS would be short the supporting forces for the remaining five divisions.  It is estimated that the Army Airborne two division force would be available for other operations 15-30 days after withdrawal from Cuba. [CONUS=Continental U.S.]

Substantial Army forces from the on-call echelon will relieve the assault forces and remain on the island to perform counterguerilla operations and conduct military government activities. This force will be progressively withdrawn as the new Cuban government increases in effectiveness.

b. The Atlantic Fleet amphibious troop lift capability (less that deployed with the Sixth Fleet) will be engaged fully during the initial phase of the operation. There may be a requirement for amphibious lift for rapid redeployment and counterguerilla activity until order has been restored. 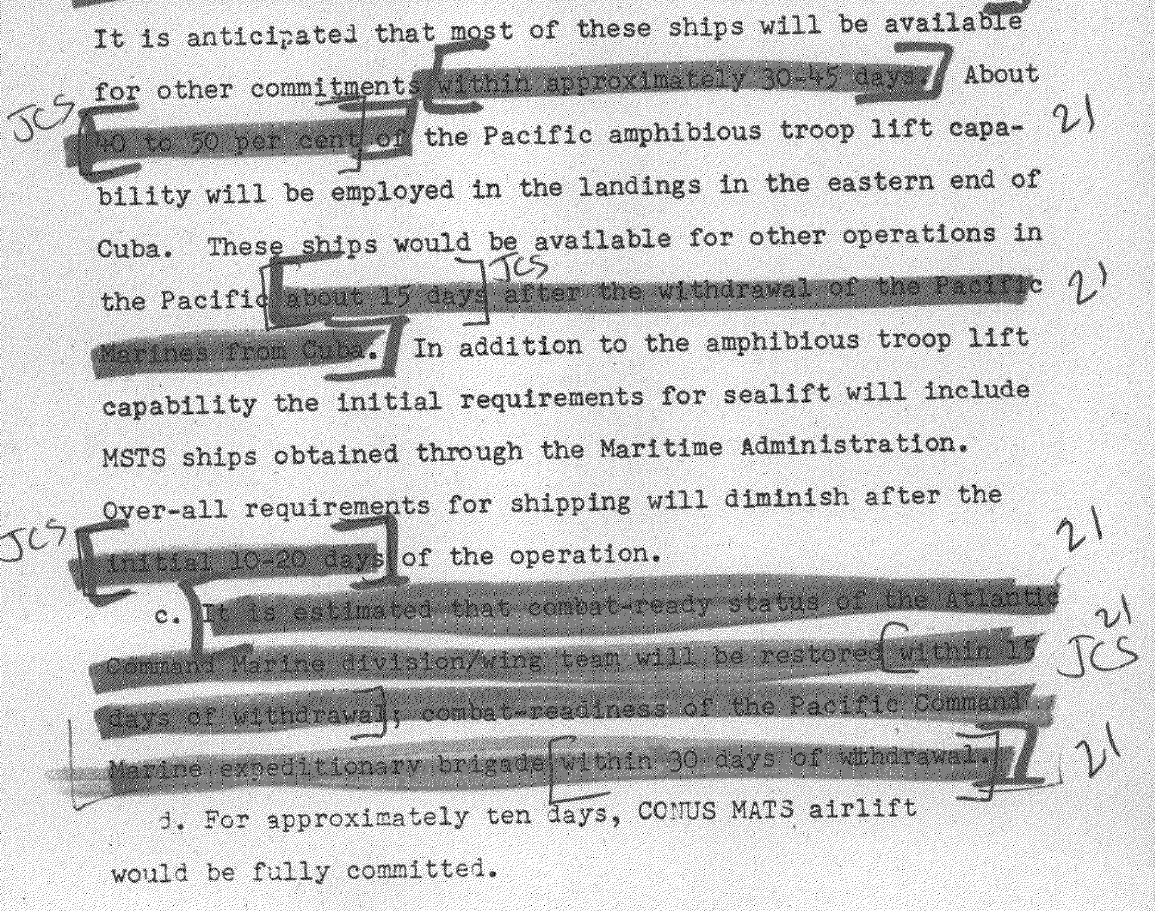 It is anticipated that most of these ships will be available for other commitments within approximately 30-45 days.  About 40-50 percent of the Pacific amphibious troop lift capability will be employed in the landings in the eastern end of Cuba. These ships would be available for other operations in the Pacific about 15 days after the withdrawal of the Pacific Marines from Cuba. In addition to the amphibious troop lift capability the initial requirements for sealift will include MSTS ships obtained through the Maritime Administration.  Overall requirements for shipping will diminish after the initial 10-20 days of the operation.

Here is the entire Memorandum: 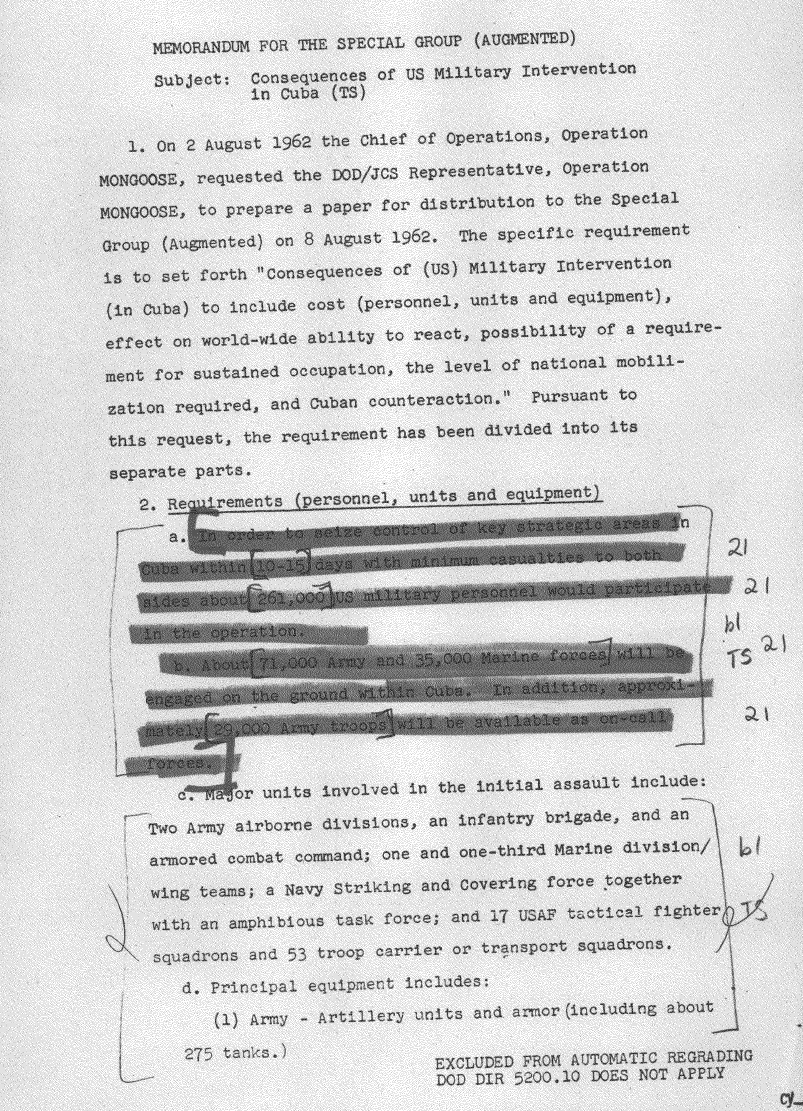 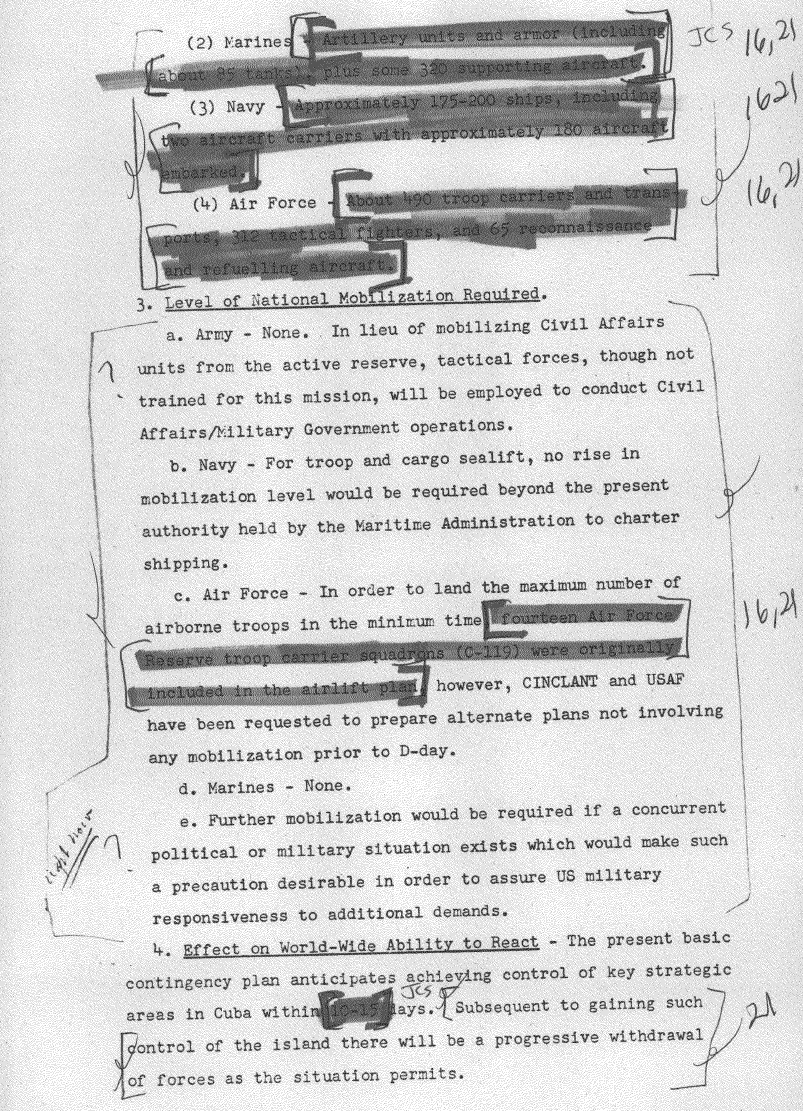 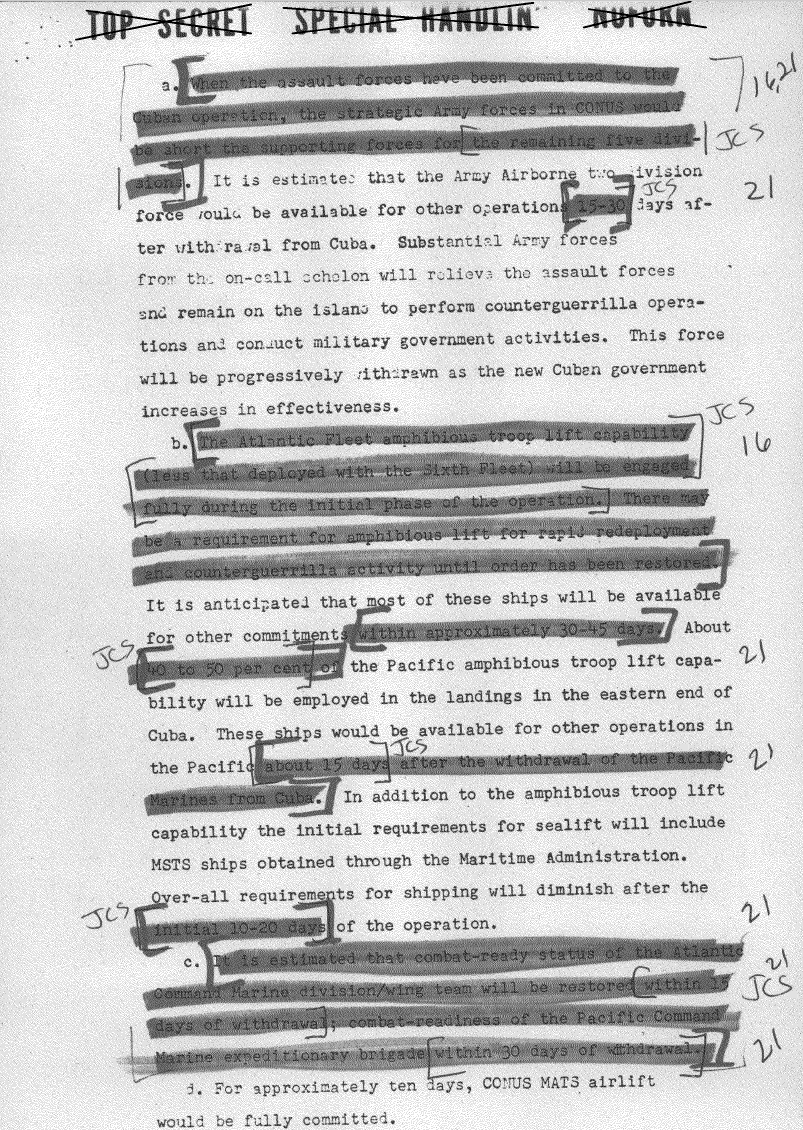 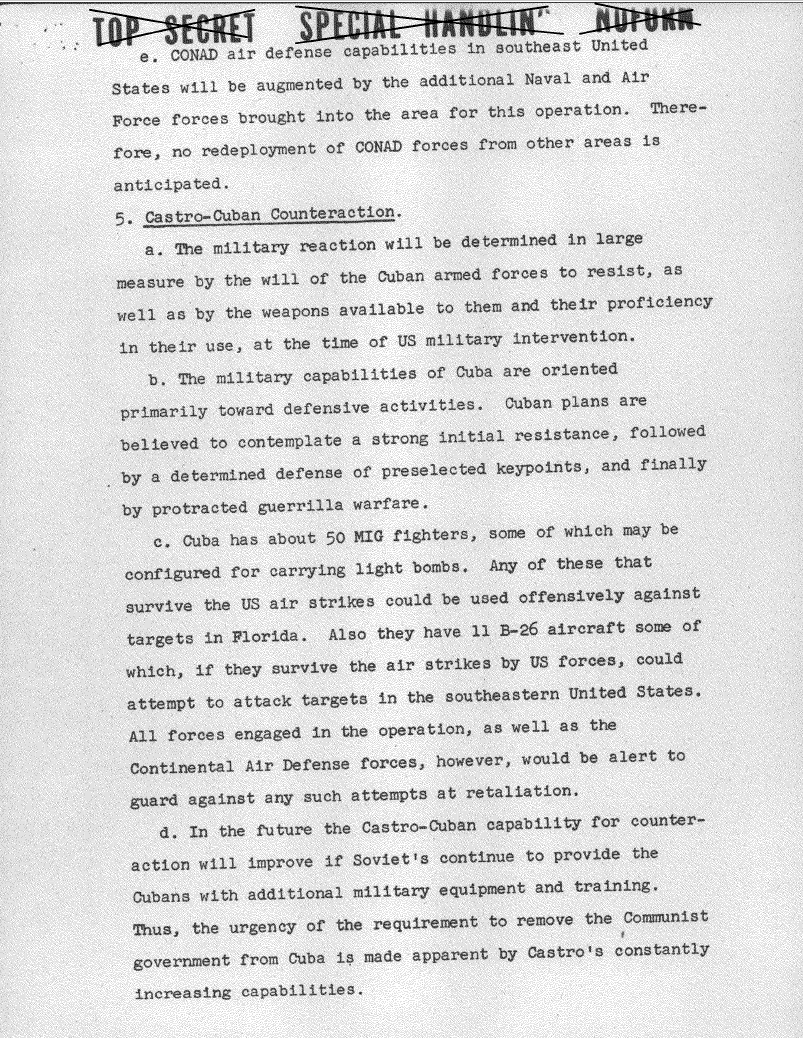 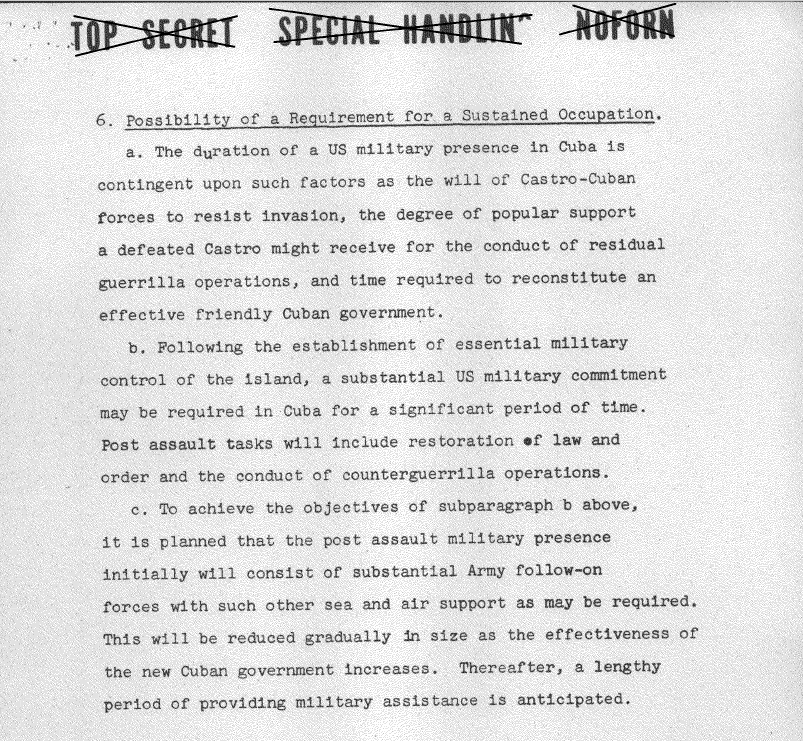 In the context of history, we must consider the timing of this memorandum.  The October missile crisis of 1962 put the superpowers on the brink of thermonuclear war over Cuba. This memorandum is dated 2 August 1962.  It appears that the intelligence apparatus which detected the missile buildup in Cuba also forced this plan to be scratched.  It might have also sealed JFK’s fate.