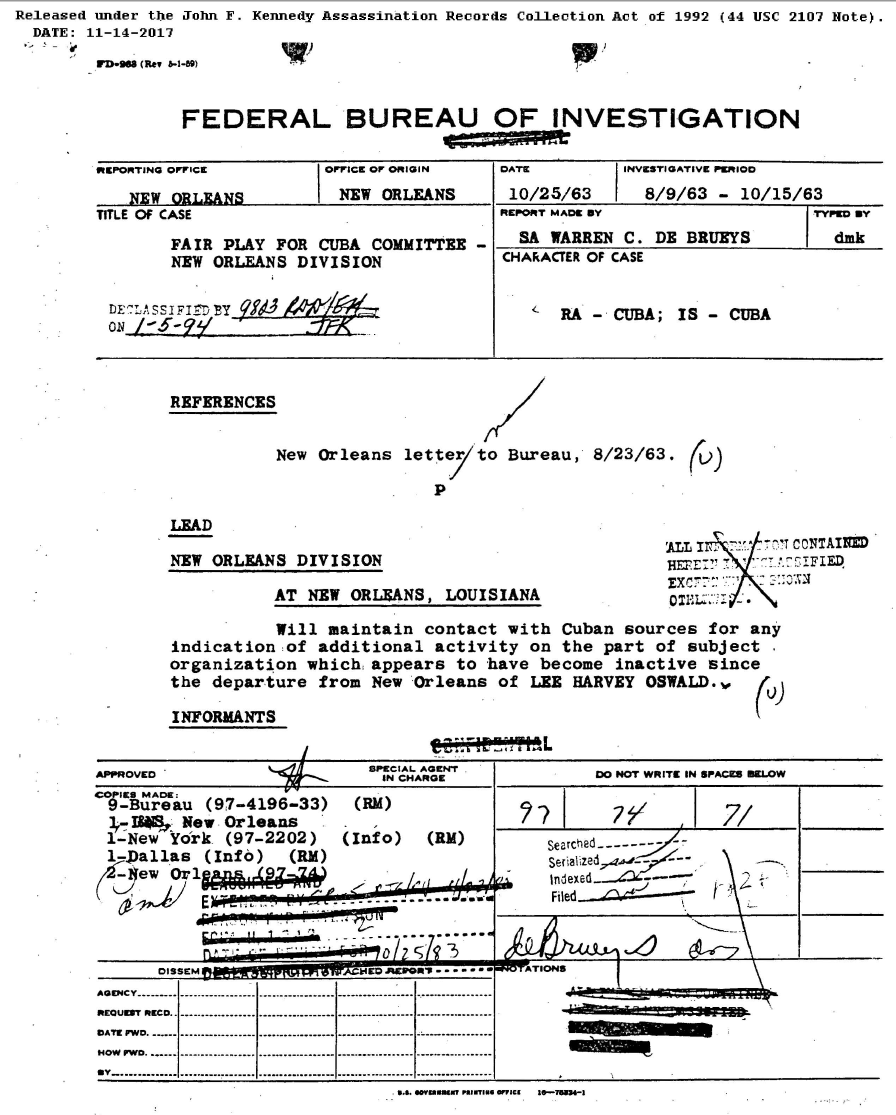 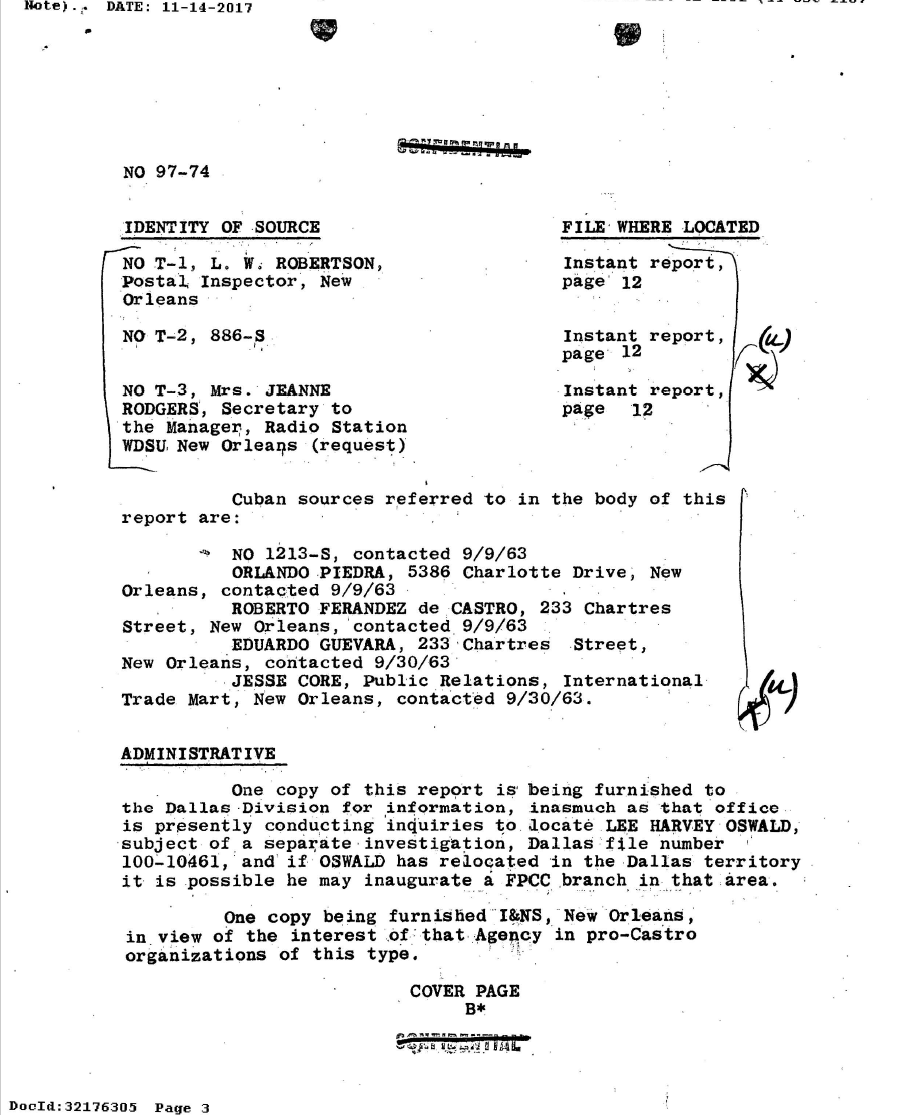 But the report stands out, not because it clearly mentions the ongoing surveillance and tracking of Lee Oswald by the FBI in the cities of New Orleans and Dallas, but because of what IT DOES NOT MENTION!  Consider the cover page of the report: 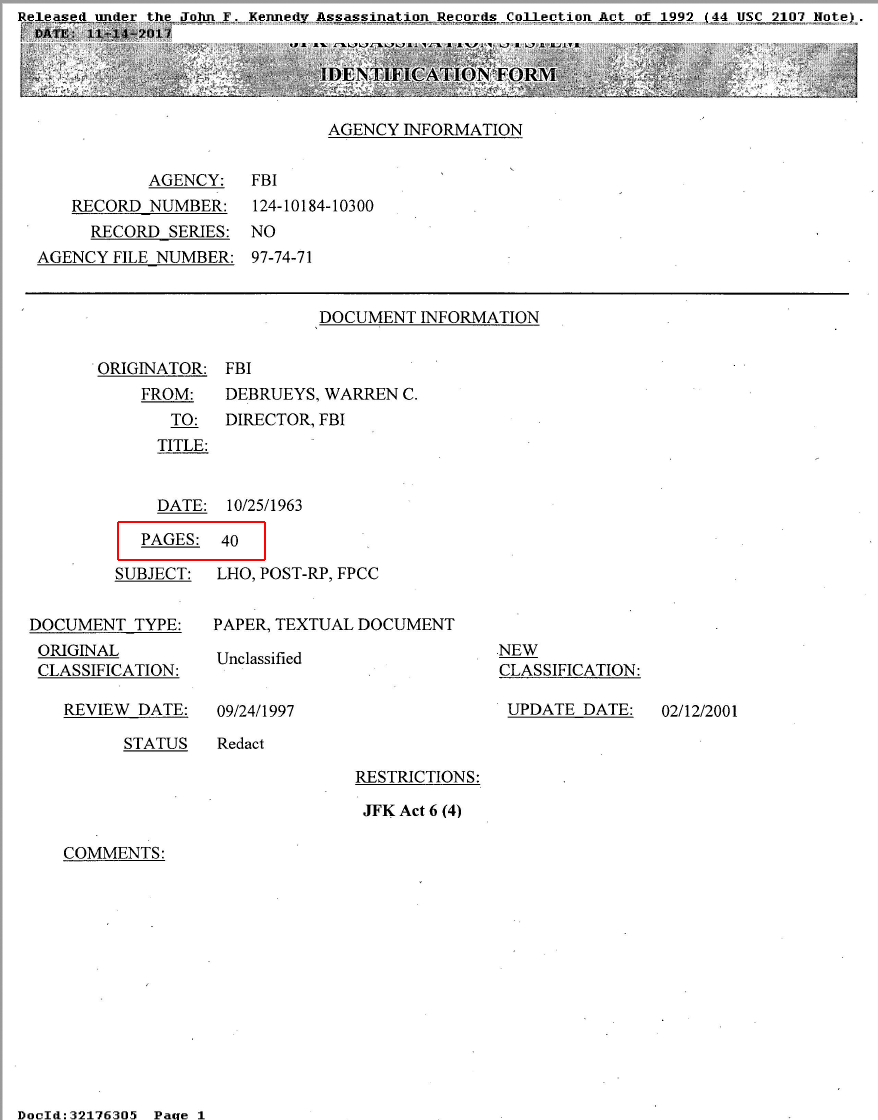 As that old Wendy’s commercial used to say: “WHERE’S THE BEEF???”

What happened to the missing 38 pages of DeBrueys 25 October 1963 report on Lee Oswald and the Fair Play for Cuba Committee?  The first two pages whet our appetite to expect some solid information as to who reported what to DeBrueys about Lee, but the actual report is missing.  I will come back to the few leads contained in these two pages.

Joan Mellen (A Farewell to Justice)  and James De Eugenio (Destiny Betrayed) wrote two outstanding books on Jim Garrison and the Clay Shaw investigation and trial in New Orleans.  Both of them were able to interview SAC Warren DeBrueys before he passed, and DeBrueys adamantly refused to admit that he knew Lee Oswald, much less that he had anything to do with Lee’s covert activity.

The reason DeBrueys became a person of interest in the JFK assassination saga originated with the suspicion that he had been Lee’s handler in New Orleans as an informant and agent provocateur for the FBI.  Going further back, it was Harold Weisberg who did most of the legwork in the mid to late 1960’s regarding this rumor.  Most of Harold’s information came from Orestes Peña, whom I covered in a blog post in March 2018. As seen in my post, it just so happens that Peña’s suppressed HSCA testimony was also released in the same batch, so another piece of the gigantic JFK puzzle appears to fit neatly into place.  Peña stated under sworn testimony that he had seen Lee Oswald in the company of not only DeBrueys, but of other agents, including Customs Agents. Furthermore, Peña dropped the bombshell that DeBrueys accompanied Oswald to Dallas before the assassination.  He offered to have both himself and DeBrueys take polygraph tests to determine who was lying!  Peña minced no words when he said that DeBrueys had threatened to “get rid of my ass” if he continued to say things he was not supposed to: 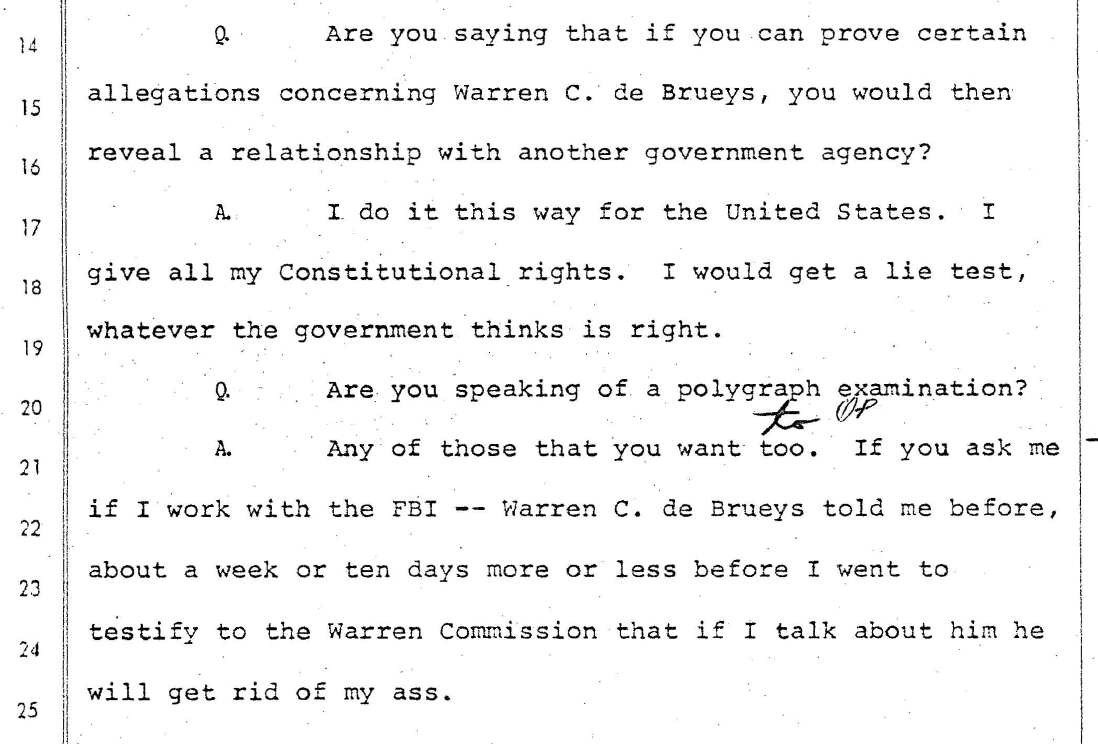 In Harold’s book “Oswald in New Orleans”, Weisberg lambasted Warren Commission Attorney Wesley Liebeler for failing to allow Peña to tell the Warren Commission what he knew about DeBruey’s relationship with Lee in New Orleans, and promptly stomped out every attempt he made to bring it into the record (WC11H346).  Even Carlos Bringuier admitted that DeBrueys approached him to advise that he could have an agent infiltrate his organization (DRE) anytime he pleased.  This and the aforementioned shows how much power DeBrueys wielded in New Orleans at the time.  This excerpt from Weisberg’s Grand Jury testimony speaks for itself: 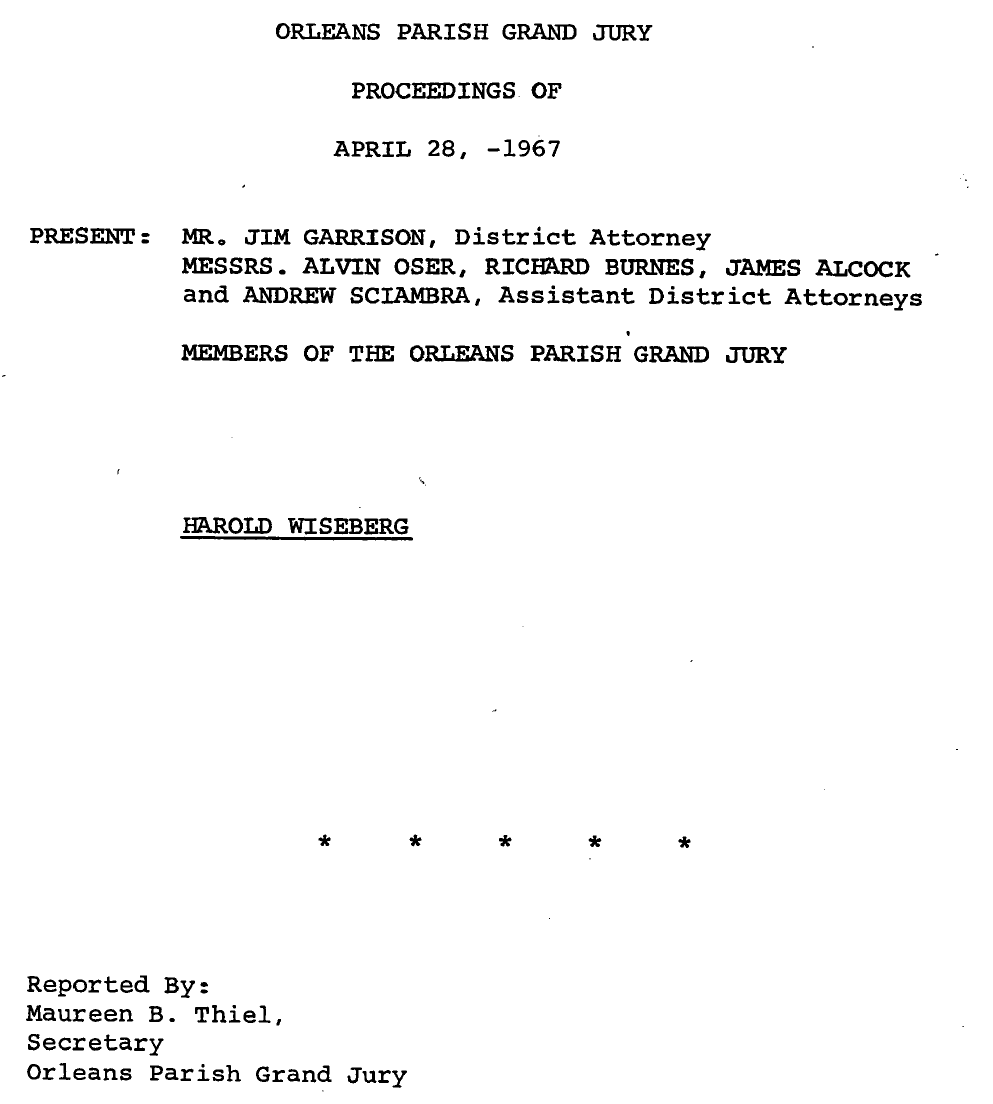 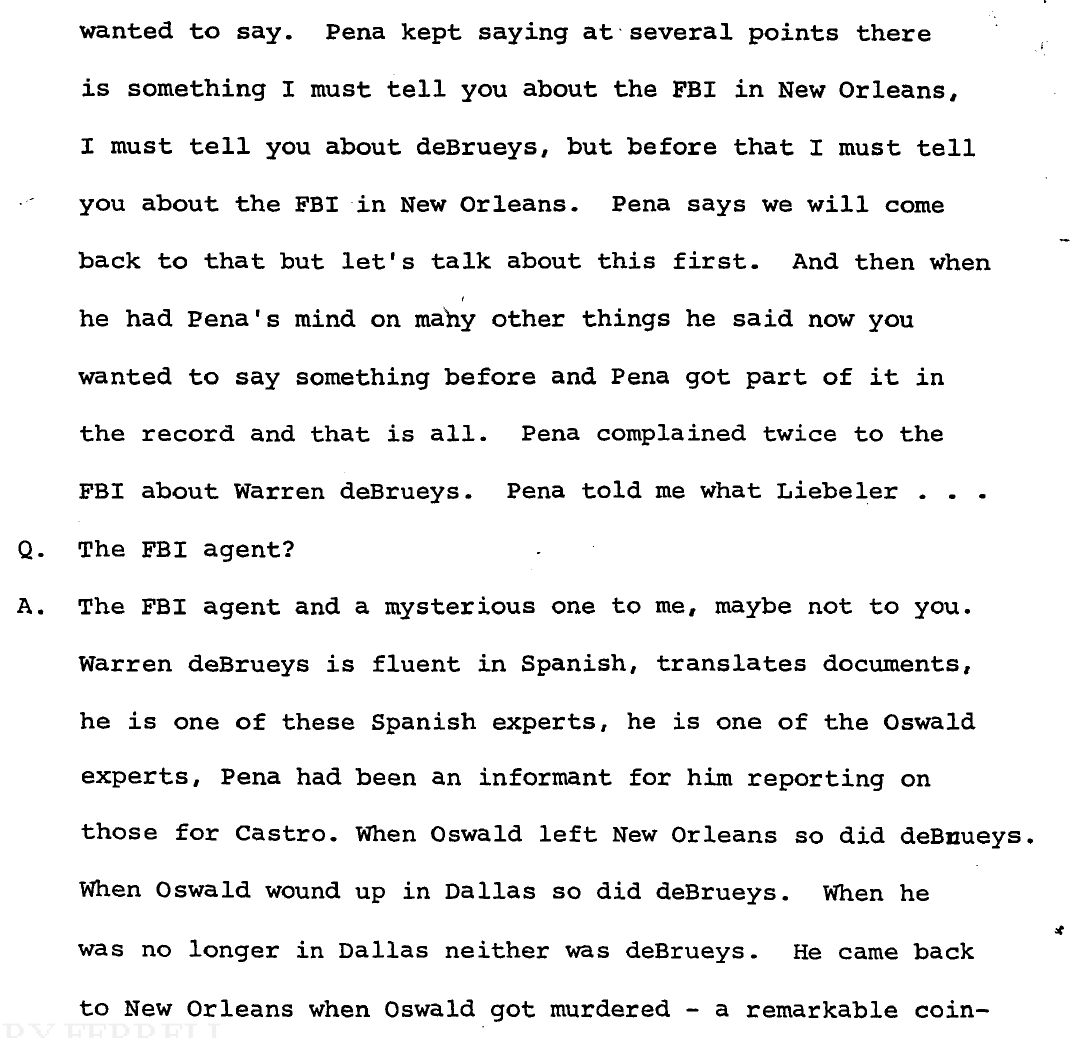 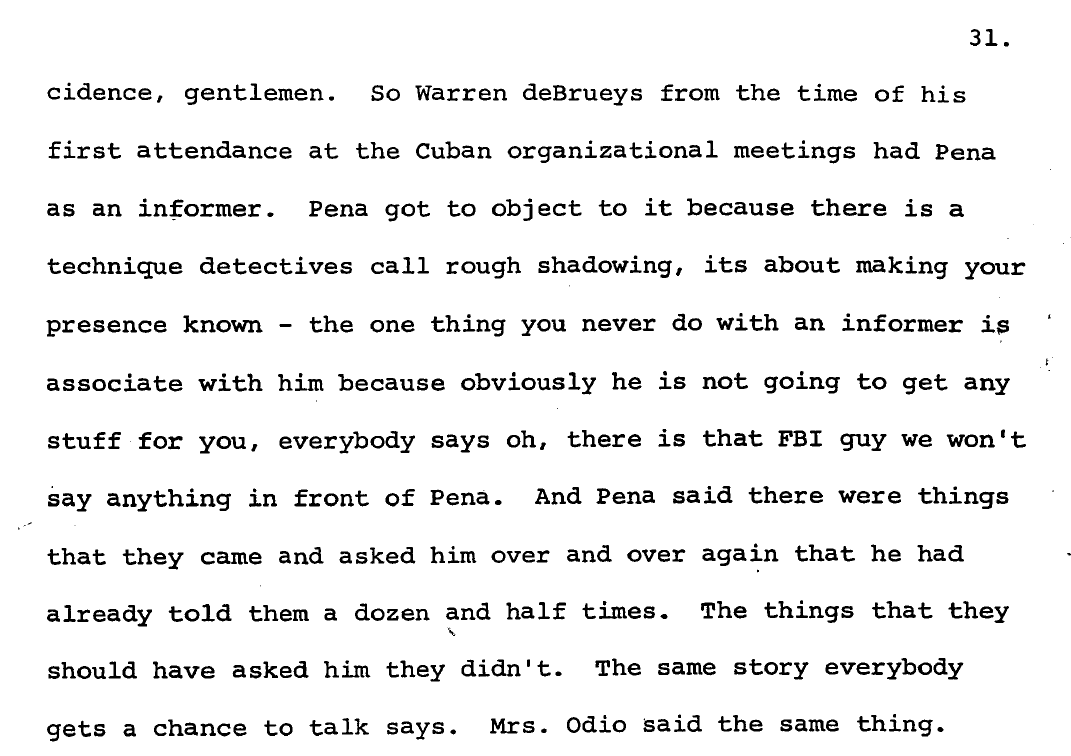 As I have mentioned above, in the late 1960’s, DeBrueys came to the attention of Jim Garrison. By then, he had been spirited out of New Orleans and was in the D.C. area when Garrison  tried to serve him with a subpoena to testify at the Shaw trial. 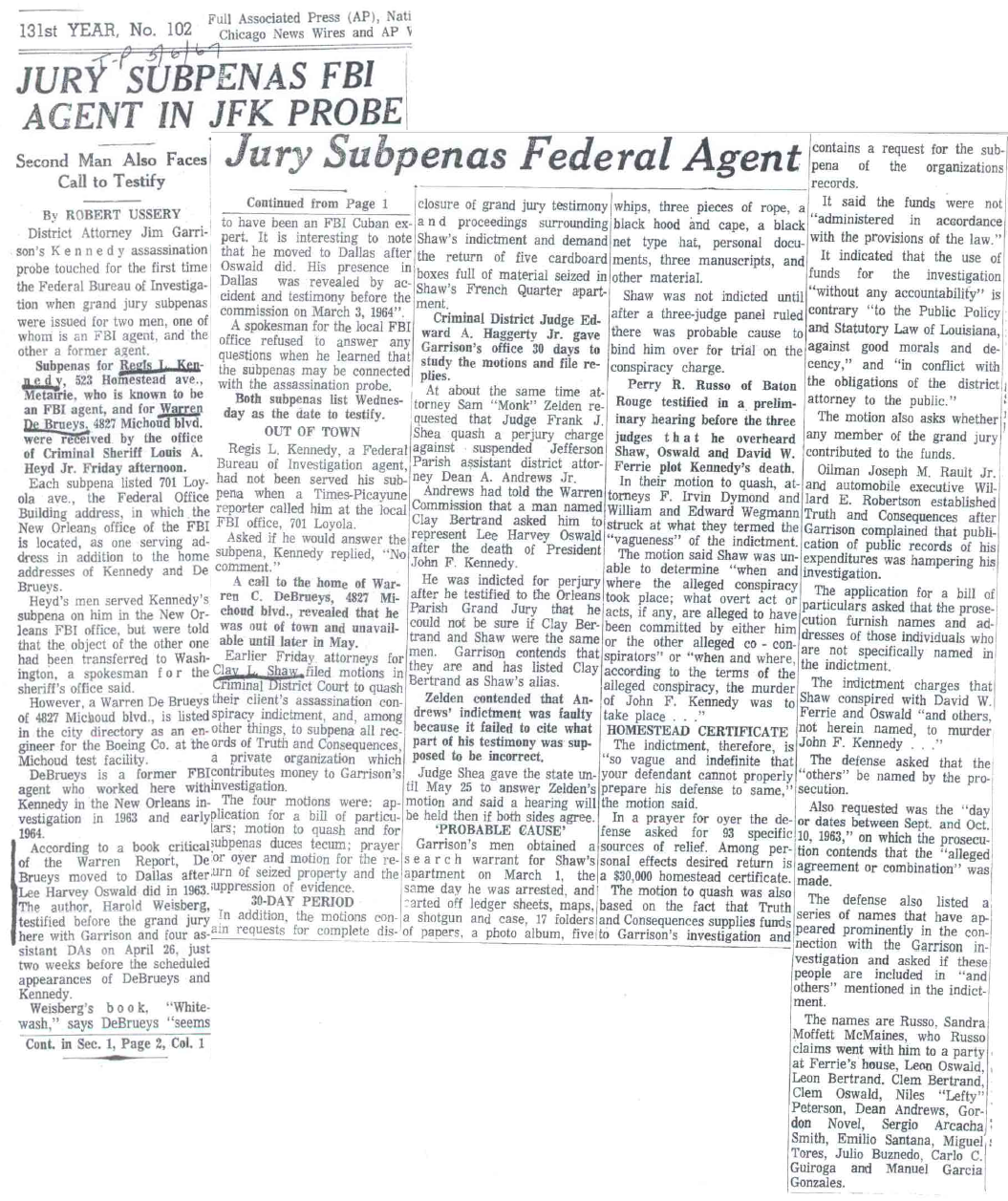 Needless to say, DeBrueys never complied with Garrison’s subpoena and rumor has it that he bounced around South America for awhile, ending up in of all places, Puerto Rico.  Bernard Fensterwald and Michael Ewing wrote a book in 1977 titled Assassination of JFK by Coincidence or Conspiracy, where they wrote:

A California researcher by the name of Greg Roberts tracked DeBrueys down in Puerto Rico and wrote this: 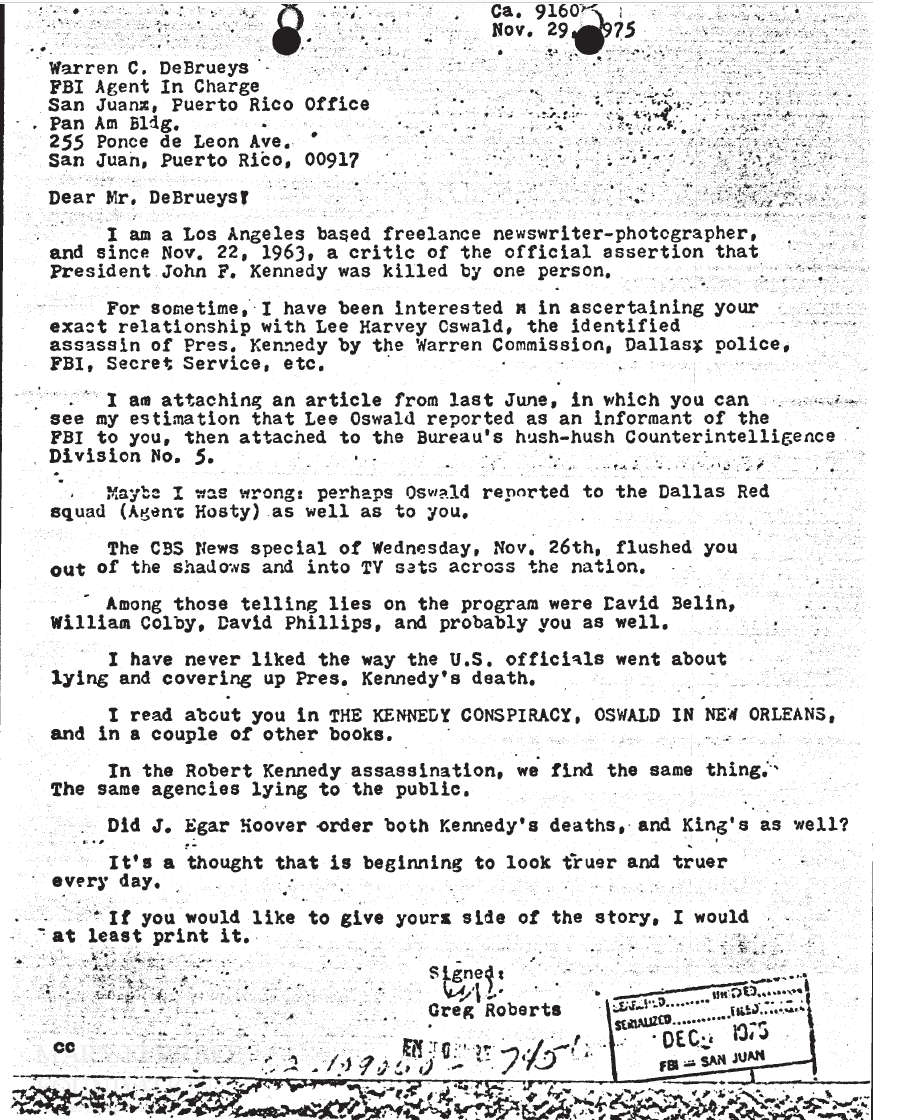 It must have really pissed DeBrueys off, because he shot this one back: 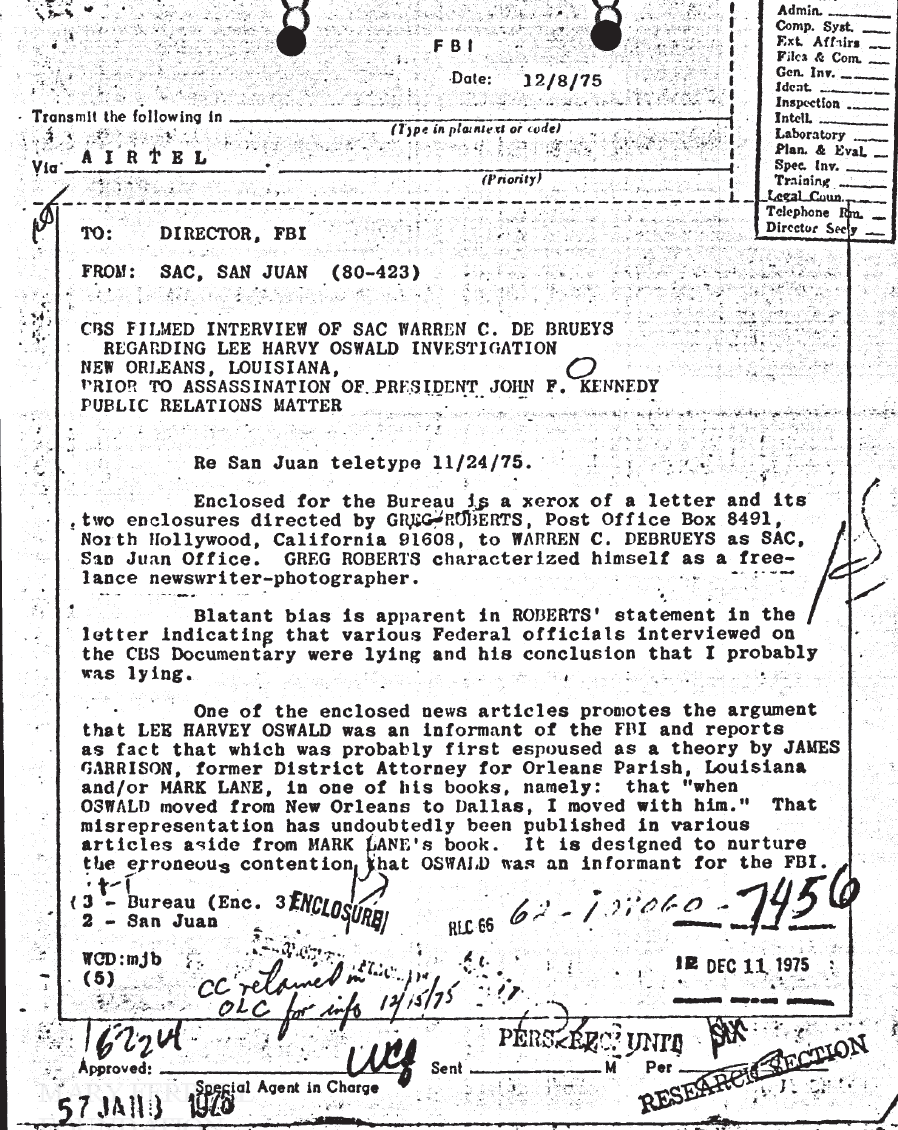 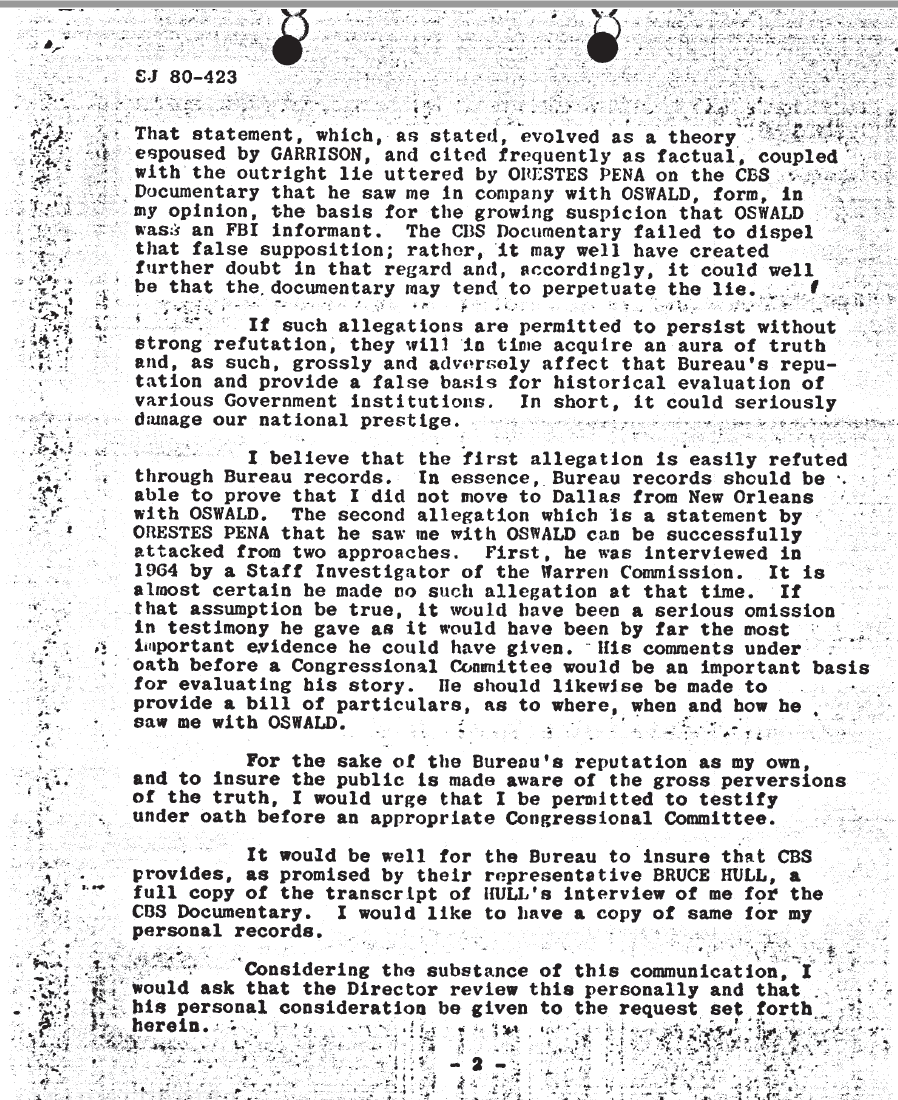 Of course DeBrueys would cite Peña’s Warren Commission testimony taken by Liebeler, the same one that Weisberg harshly criticized, pointing out that Liebeler purposefully prevented him from saying everything he knew about DeBrueys and Oswald in New Orleans. But what about Orestes Peña and his allegations?  DeBrueys knew well beforehand that Peña was to testify before the Commission and he was so upset with  Peña that he submitted him to a full FBI investigation and background check the summer of 1964, falsely documenting that Peña had plans to travel to Moscow!

Regarding DeBrueys service as SAC in Puerto Rico, it is noteworthy to mention that the famous Cerro Maravilla execution of two young pro-independence activists happened just one year after DeBrueys left the island, on 25 July 1978.    The organization Third World Traveller described the events this way: 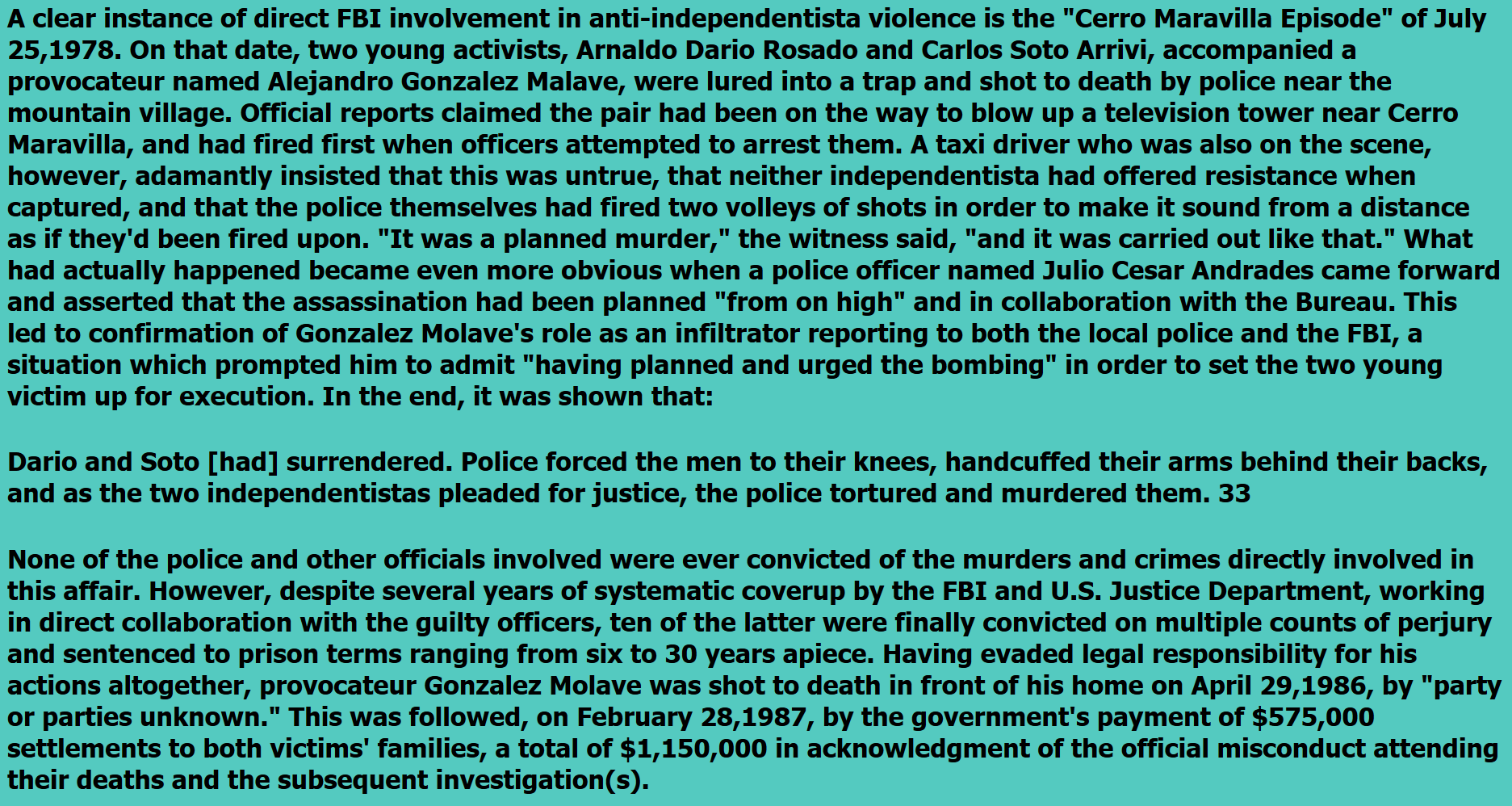 An agent provocateur, infiltrator, and undercover operative answering to the FBI, inciting two young lads to carry out a harebrained scheme guaranteed to fail, in order to influence public opinion.  Does this sound familiar?  Did DeBrueys leave this mechanism in place before he left this “coveted” FBI SAC position in Puerto Rico? If he did, his handling of Lee Oswald in New Orleans and Dallas would have put him at the top of the list of those qualified to do so.

Returning to the newly released DeBrueys 25 October 1963 report, it is important to bring into this discussion the famous “Kaack” report of 31 October 1963.  Bear in mind that DeBrueys report predates the Kaack report by only six days. The Milton Kaack report has been cited by many researchers and writers of JFK books, mainly because it contains the 8/10/63 report by FBI agent John Quigley regarding the fight Lee had with Carlos Bringuier and some Cubans on 8/9/63 down on Canal Street while Lee was distributing FPCC leaflets. If one were to compare the format of the Kaack report with the DeBrueys report, the first thing one would notice would be that the Kaack report is complete.  It contains the same two page introduction EXACTLY as the DeBrueys document, and continues on to its conclusion up to page 20: 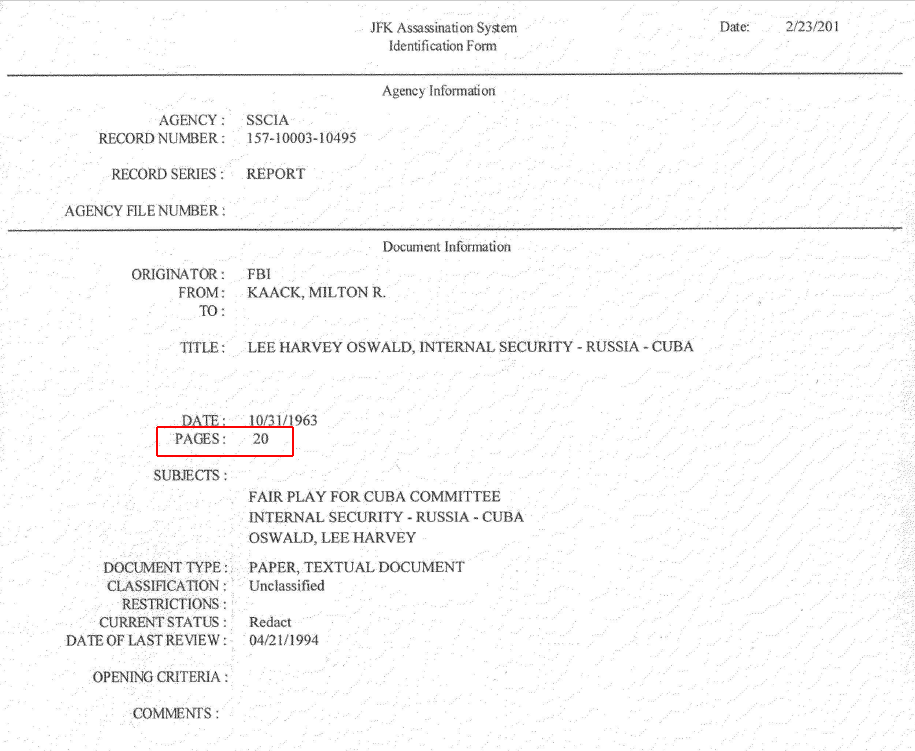 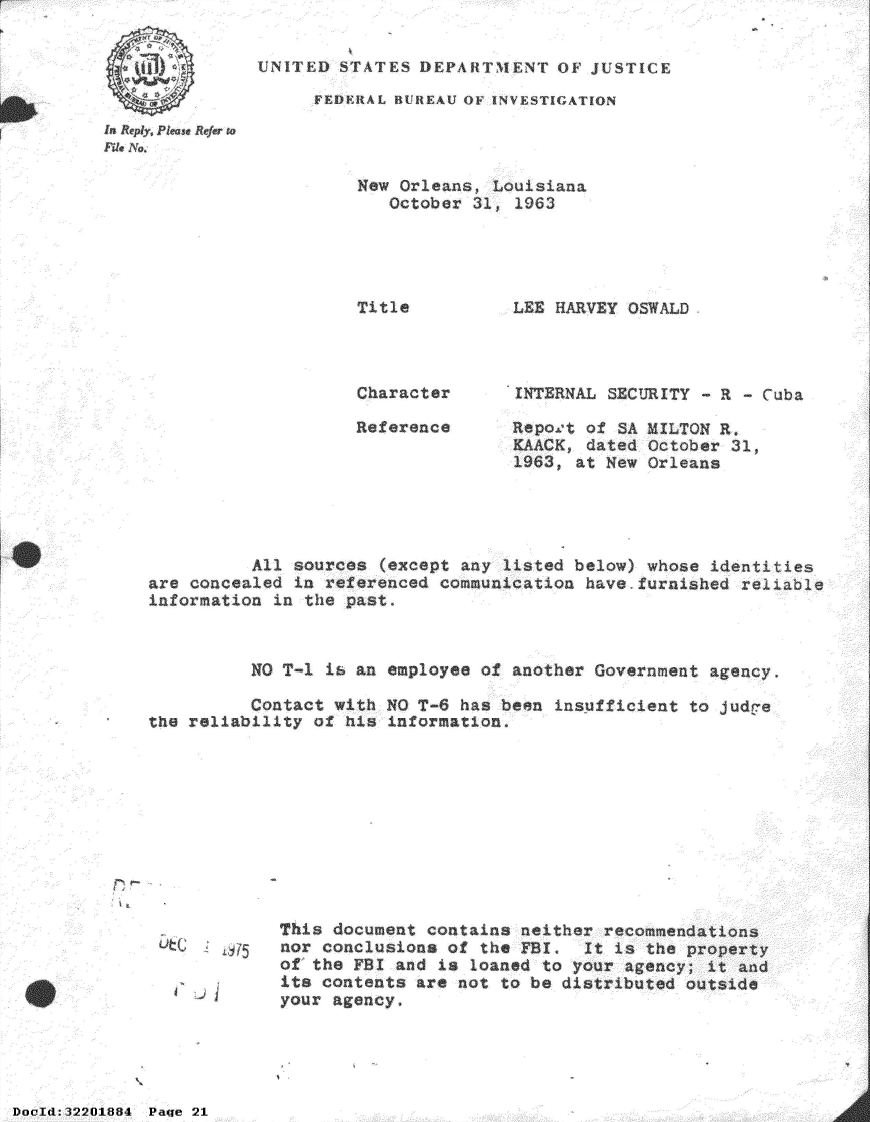 One of the best leads to come out of the skimpy two pages of the DeBrueys report has to do with the informants used by both De Brueys and Kaack. Combining the information contained in both reports we can conclude that informant “NO T-1”, who DeBrueys identifies as New Orleans Postal inspector Lew Robertson, was in fact, an employee of another “government agency”.  But which agency could that be? NARA 124-90145-10016 which is also a DeBrueys report on subject Celso Hernandez  identifies NO T-1 as CIA!

Let’s take a closer look at U.S. Postal Inspectors relationship with the intelligence agencies.  “Flaps and Seals” was (and probably still is for those who still use snail mail), an intricate part of intelligence gathering.  As we have seen in the Mexico City LIENVOY project featuring Anne Goodpasture and company, mail opening was a very important component of the operation.   Let’s face it, Postal Inspectors were uniquely positioned to serve the CIA and FBI in ways no other government agencies could. In Dallas Postal Inspector Harry Holmes case, however, it was taken to another level. Ian Griggs has researched and fully documented Holmes actions the weekend of the assassination.  Holmes FBI informant number in Dallas was T-7.  Of all the information uncovered by Griggs, I find the revelation of Holmes having followed the assassination from the Annex Building with binoculars to have been particularly disturbing.

But I’m not done discussing the informants.  Jesse Core worked for Clay Shaw at the International Trade Mart as director of Public Relations.  Even though Mellen does not offer any evidence, she writes that Core was CIA (pg 51).  Was he?  Right after the Bay of Pigs, 17 April 1961,  CIA Deputy Director General Charles Cabell was hosted at a grand event in New Orleans by, of all people, Clay Shaw and Jesse Core!  It has already been proven that Shaw was a CIA asset, but this event really blew my mind! The Cabell affair was quite the soiree, where Claw Shaw himself made the Cabell introduction. Here is the press release by  Jesse Core, which goes into detail about the Cabell family military lineage and even mentions his brother, Mayor of Dallas at the time Earle Cabell, who we reported two years ago had been a CIA asset himself: 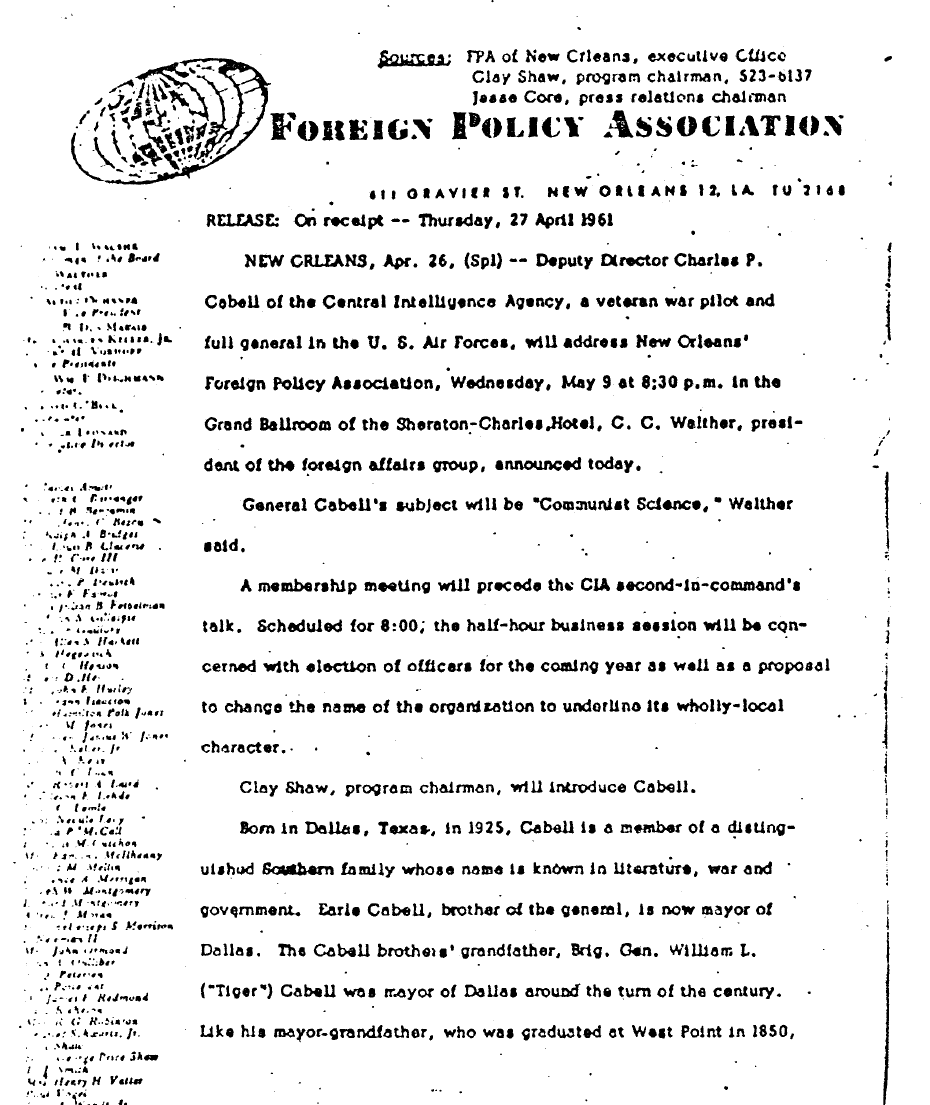 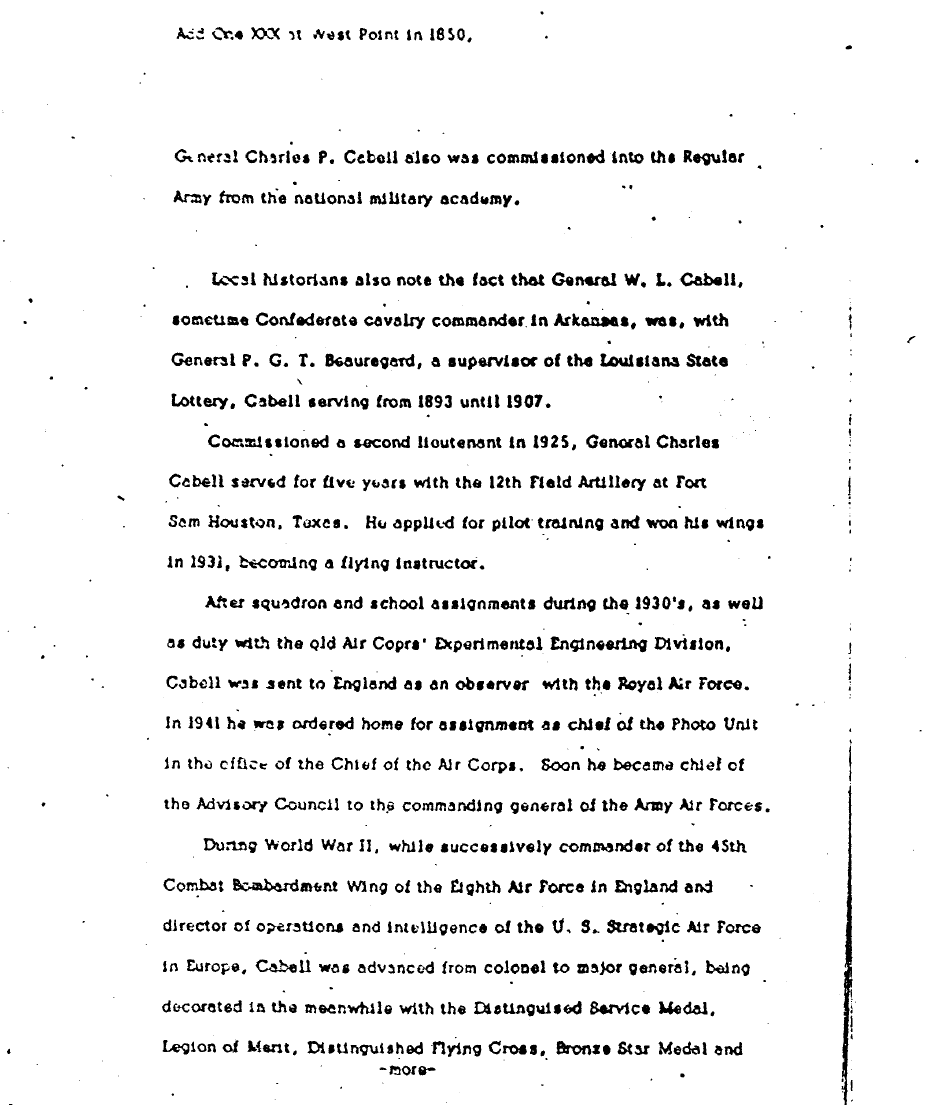 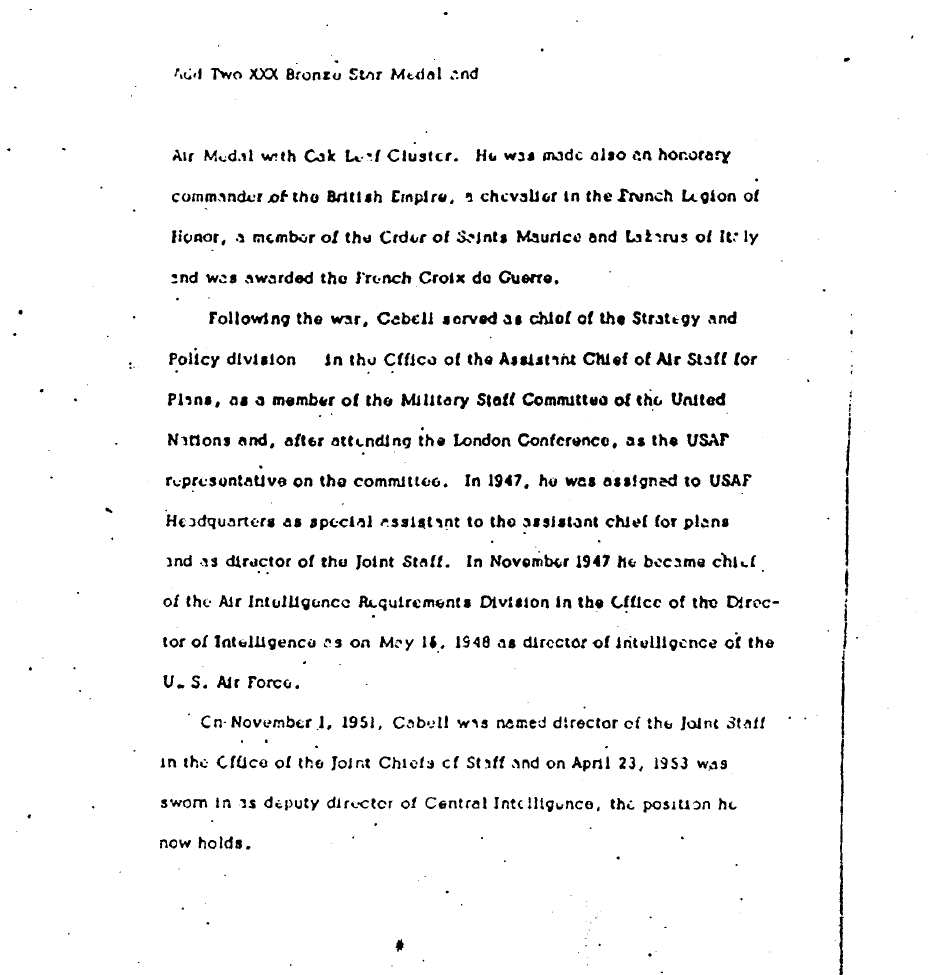 It appears that Jesse Core was also part of sheep dipping Lee Oswald.  The evidence here clearly suggests he had an ongoing relationship with DeBrueys, plus  allegedly, he was present at the Trade Mart on Canal Street when Lee was distributing Fair Play for Cuba Leaflets.  He even provided one for the FBI! 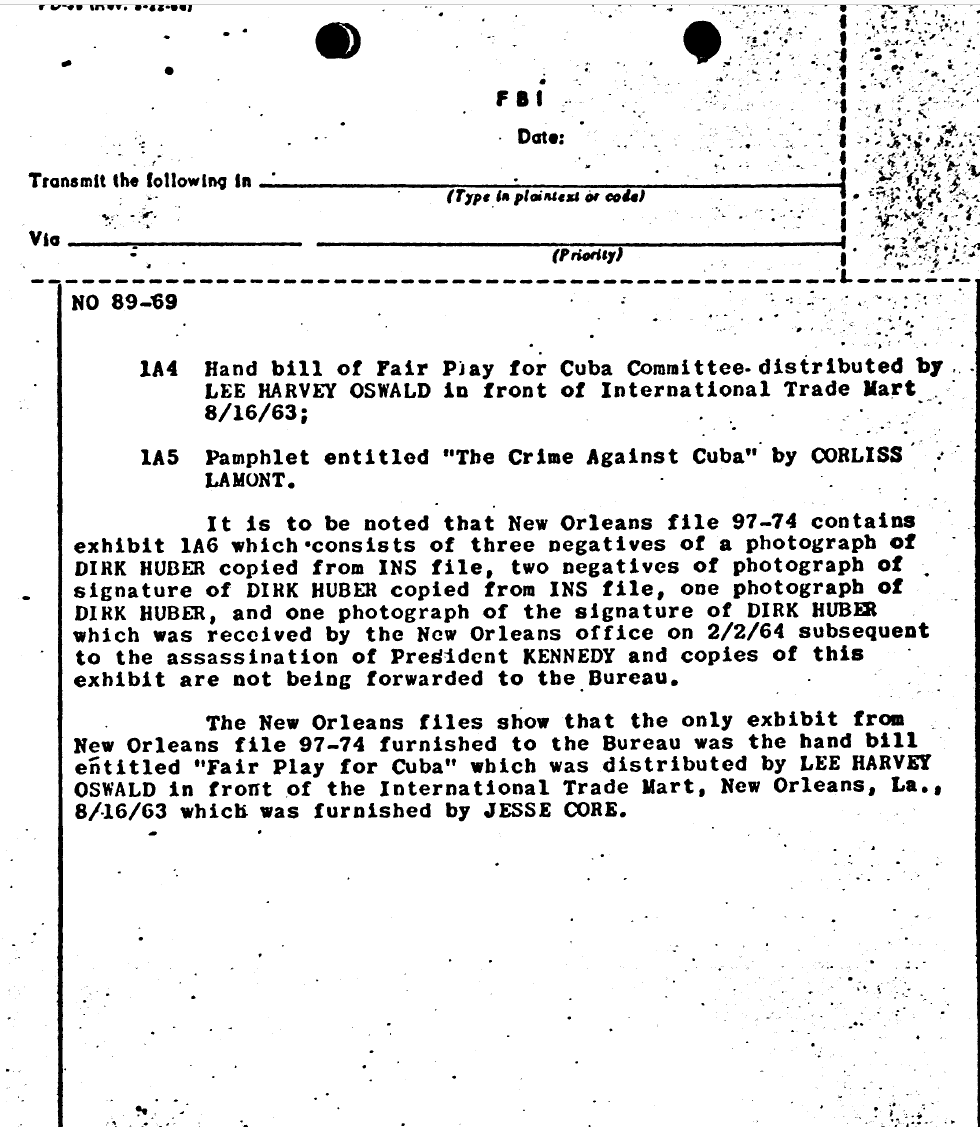 One particular document cited by Joan Mellen says that Core and Garrison investigator Alberto Fowler reported that DeBrueys stood inside the glass doors of the Trade Mart while Lee passed out his leaflets.  I guess we can say that Mr. Core was always in the right place at the right time!

But what about Cuban Orlando Piedra? 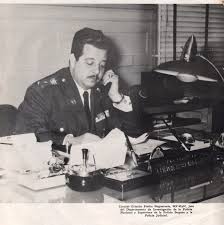 Orlando Piedra had close ties to the FBI from his days as Chief of the Cuban Bureau of Investigation under Cuban dictator Fulgencio Batista.

This one is a particularly despicable act by Piedra in 1955:

This next document reinforces the concept noted by many researchers that Colonel Orlando Piedra had very close ties to the FBI under Batista’s regime:

Furthermore, new documents show that his ties to the FBI continued unabated after he joined the exile community in Miami and New Orleans. 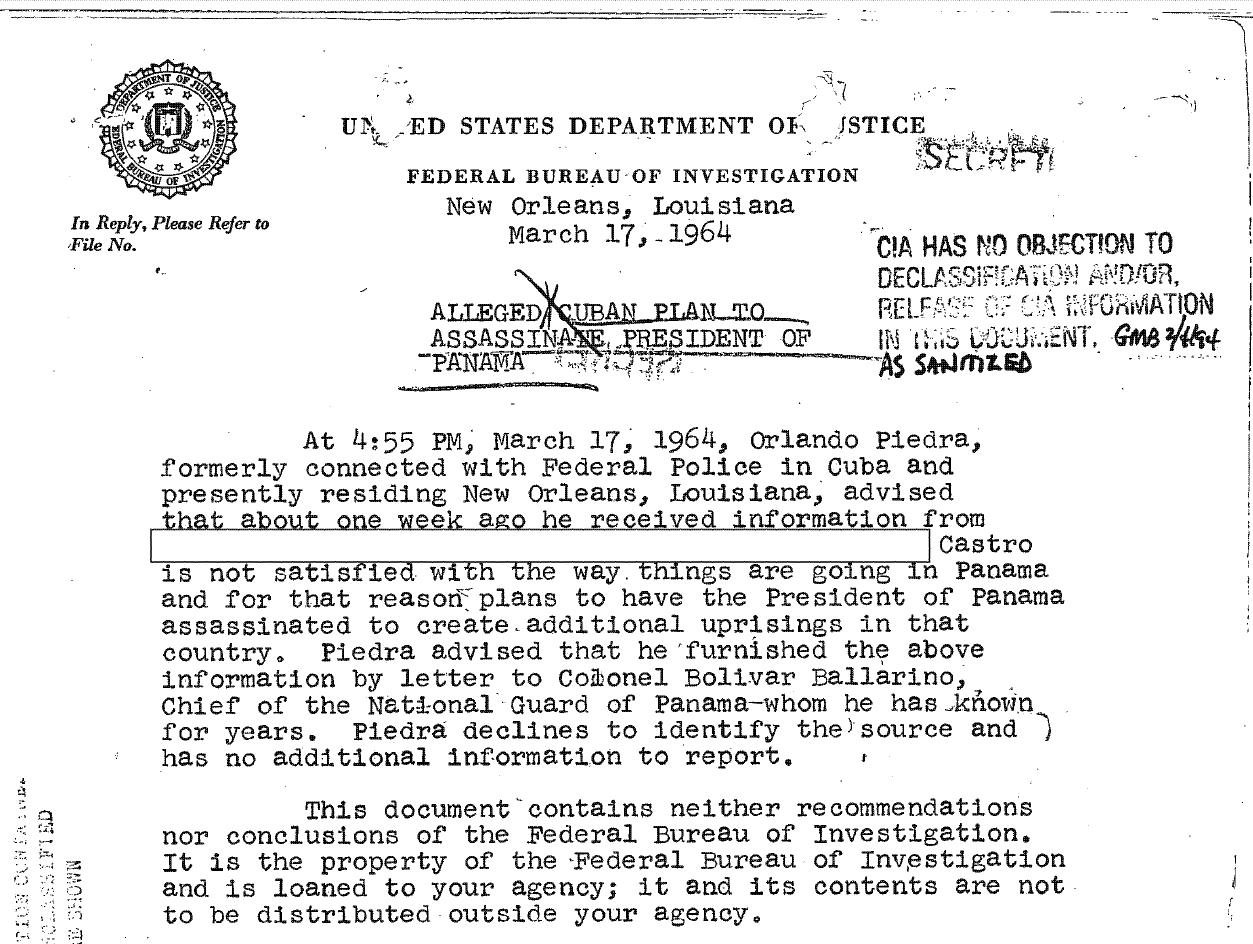 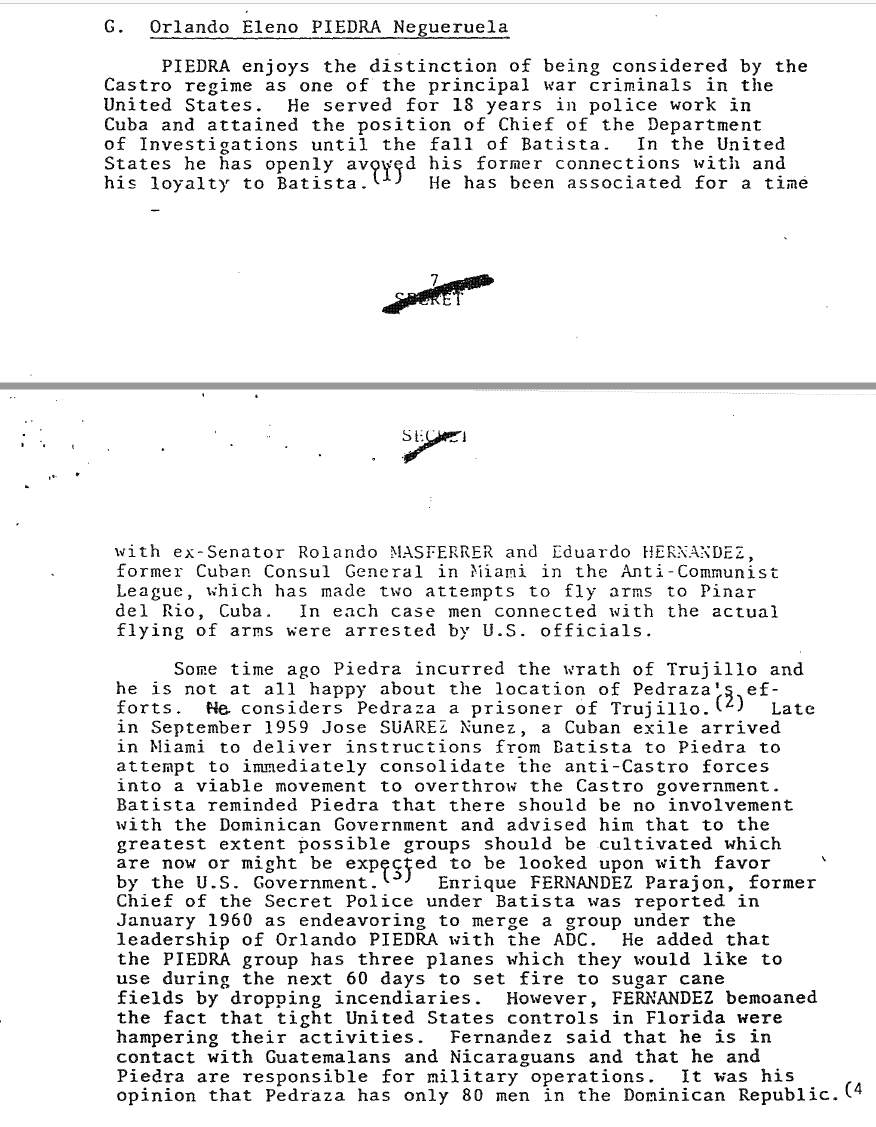 Turner and Hinkle wrote in “Deadly Secrets” that Piedra was a frequent visitor to Guy Bannister’s office on Camp Street where plots to kill Castro were discussed.  The source of this information was Ricardo Davis, who ran the camp in Lacombe Louisiana. (ref Weisberg interview)

Cuban blogger Carlos Serpa Maceira writing for Guayacanweb, offers very specific details on Piedra while he was Batista’s top liutenant, and writes about the role Piedra had in Batista’s dissident suppression machine, while assuring us that Piedra’s name and address were found on Lee Oswald after his arrest.

“Counting other acts (by Piedra), the assassination of John F. Kennedy and plans to attack  Fidel Castro, Piedra was questioned at that time by the FBI in relation to the magnicide in Dallas, where documents mentioning the ex Cuban Colonel and his address were found on Lee Harvey Oswald.”

Note: 117 Camp Street is the address where Orlando Piedra had a clothing-rental store (ref .Weberman Nodule 18) 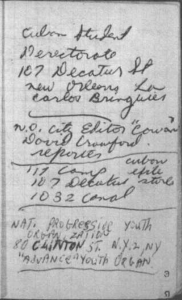 This raises an interesting question. Was Orlando Piedra in some way involved with Lee in Anti-Castro activities, where Lee was actually posing as pro-Castro with his FPCC activity, all of this under the watchful eye of Lee Bannister?  What was his address doing in Lee’s address book?

Getting back to the DeBrueys report, since we only have the first two pages, all we can do is speculate as to what kind of information the informants reported in the remaining 38 pages. What information about Lee Oswald and the Fair Play for Cuba Committee did Lew Robertson (possible CIA), Orlando Piedra (FBI) and Jesse Core (CIA) provide Warren DeBrueys that had to be suppressed?  What exactly was Orlando Piedra’s role as an informant for Warren DeBrueys in New Orleans?

The bottom line in all of this happens to be that it appears the CIA (KUBARK) and FBI (ODENVY) worked closely together in the following manner: The FBI wrote the reports and the CIA and FBI provided the “informants” to “corroborate” the information contained in these.  Just like shooting fish in a barrel.