One of the JFK films to make a late debut was the Jack Daniel Film.  It did not surface until late 1978!  Unfortunately, the film was handed over to the FBI by the Daniel family where it undoubtedly underwent significant scrubbing.

This vintage 1979 article published in the journal “Clandestine America” explains how David Lifton correctly inferred that the order of the vehicles coming out of Dealey Plaza was not what we had been led to believe, that there were no motor jockeys visible anywhere near the vehicles, and that the film therefore discarded the urban legend that Officer James Chaney caught up to Chief Jesse Curry’s lead car to inform him about the severity of JFK’s wounds:

This is the contradiction by Forrest Sorrels mentioned in the above article. Bear in mind that at the time of Sorrels fantasy scenario, the Daniel Film had not been seen by the public. Ditto for the motorcycle escort as noted below. Both refute Sorrels story. 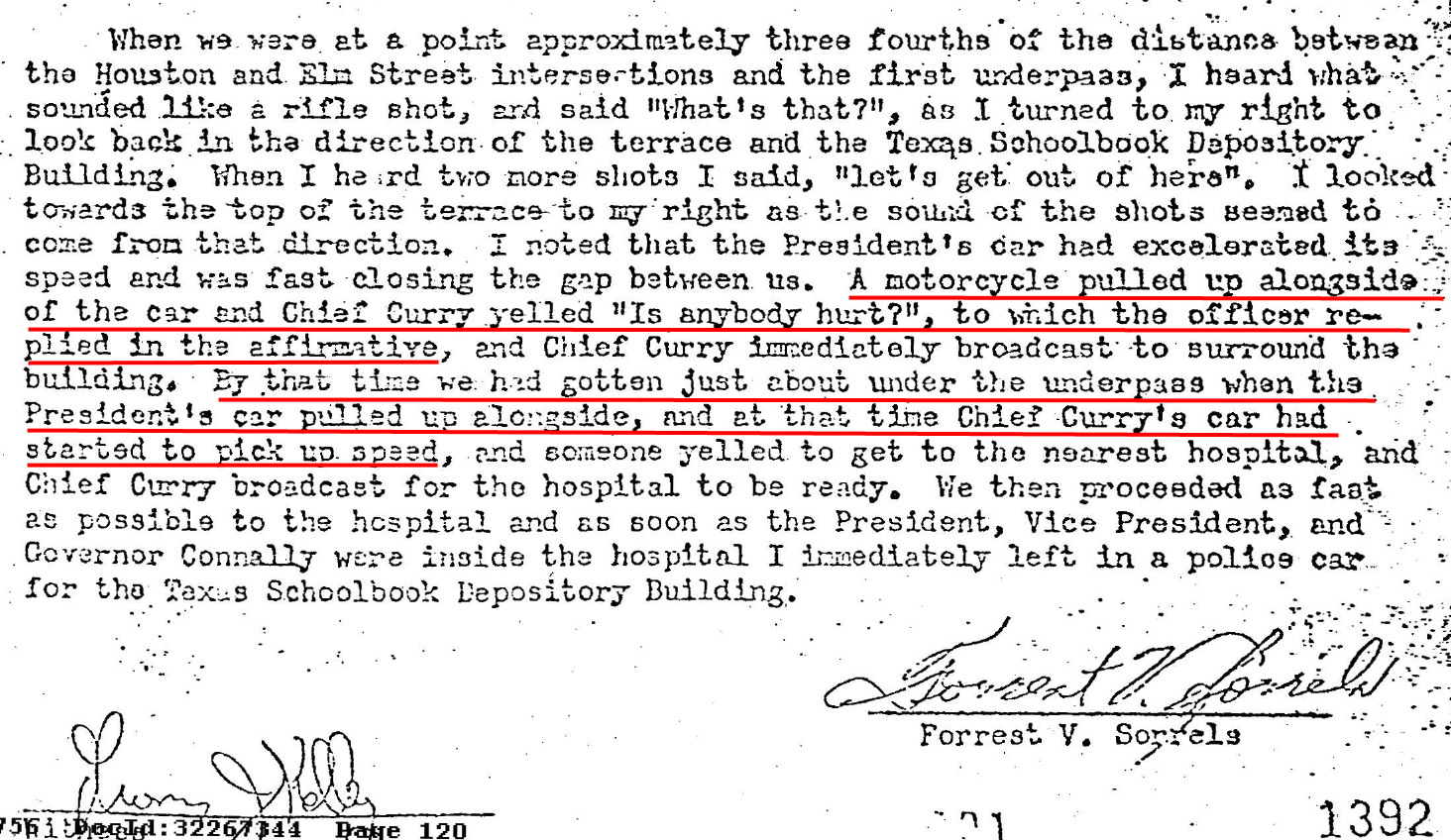 This, of course coincides with what “The JFK Horsemen” stated in telephone interviews recorded by Fred Newcomb in 1971, transcribed by yours truly in 2014, which completely changed the perception of what really happened on Elm Street, and where Chaney stated that he stopped long enough for Bobby Hargis to run in front of him and between the two limousines which had stopped, as he raced up the grassy knoll. This delayed Chaney long enough to make it impossible for him to catch up to Curry’s lead car as mentioned above.  Chaney was never called to testify before the Warren Commission.  Here is the reason why: 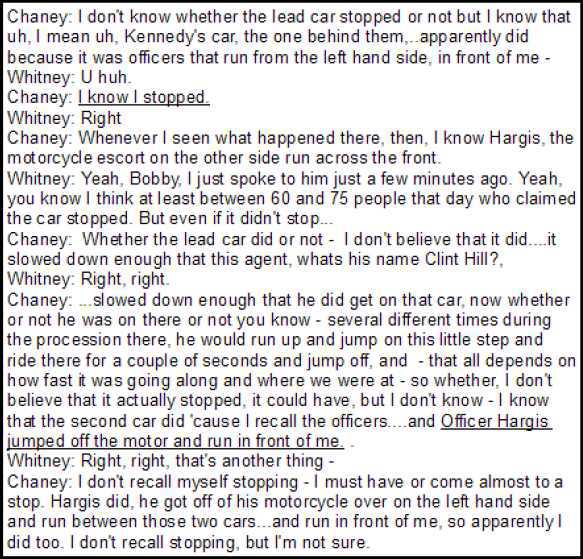 Recently, film expert and collaborator Mike Machanska observed darkening in the area of the JFK limousine windshield in some of the frames of the Daniel Film:

“And check out these obvious Black Outs. I’ve never seen a clear copy of this film before to notice…..” 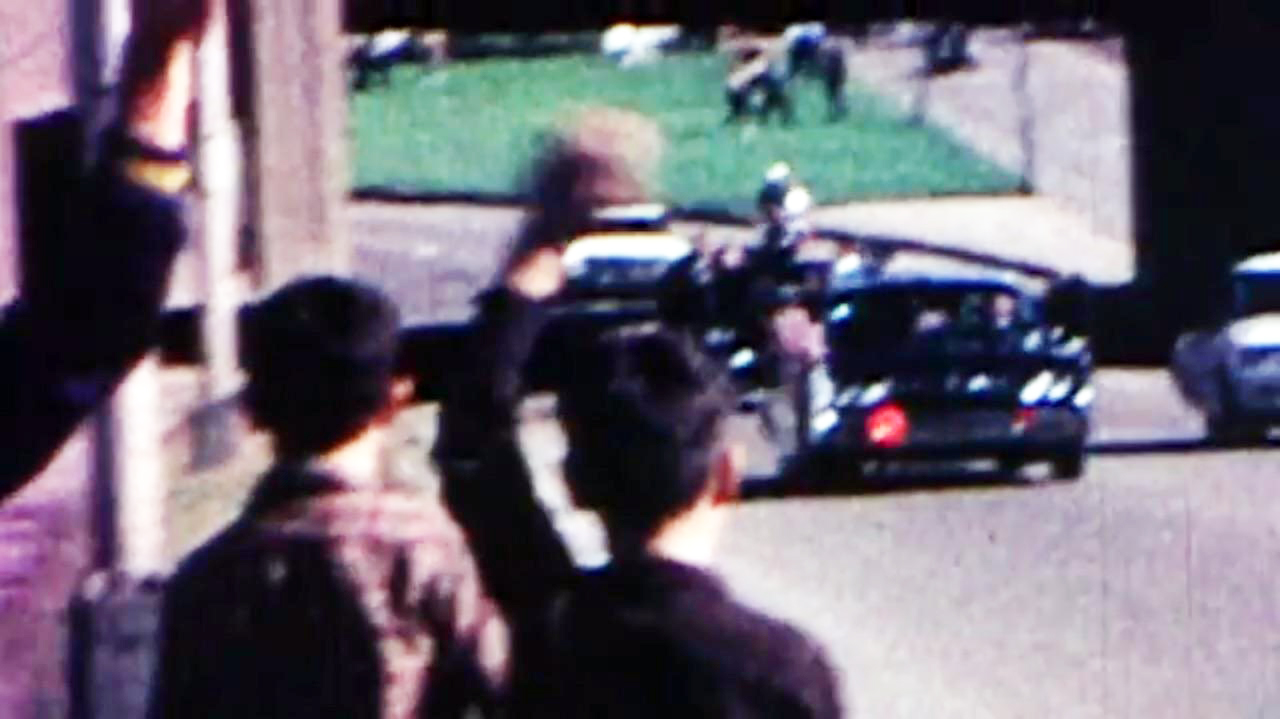 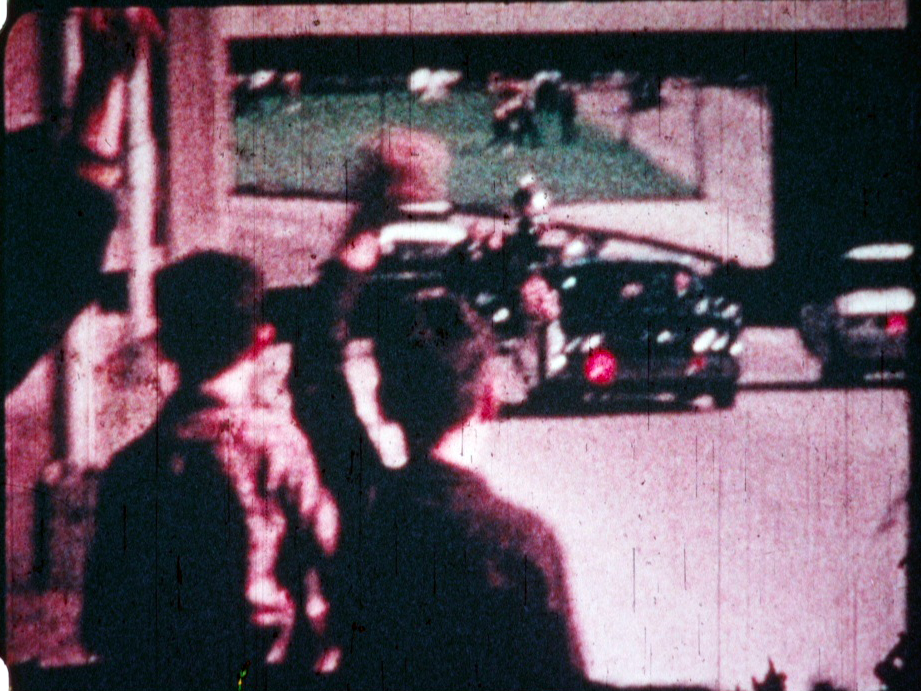 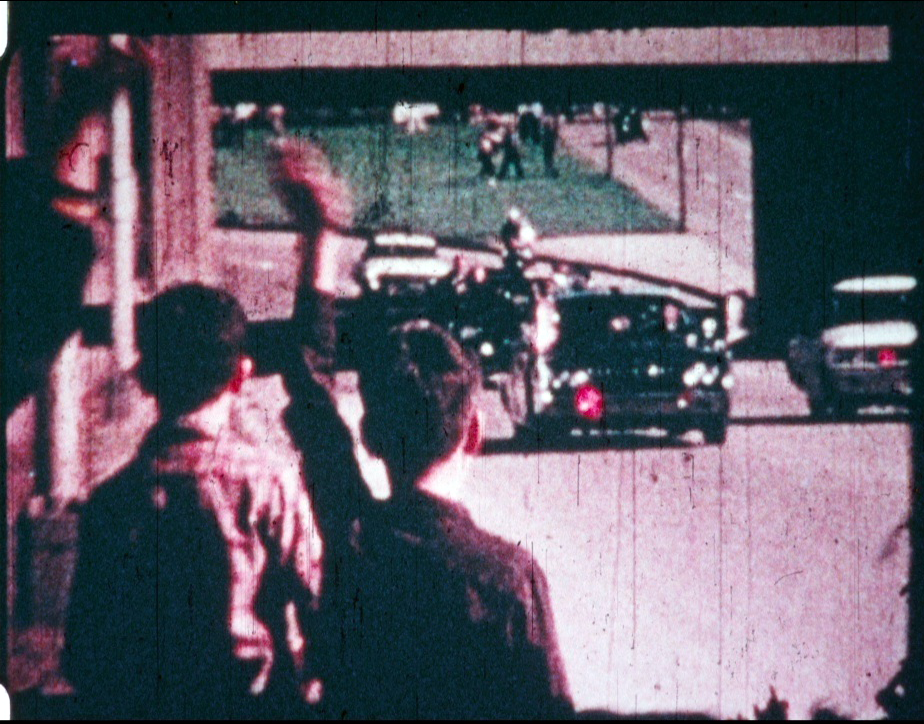 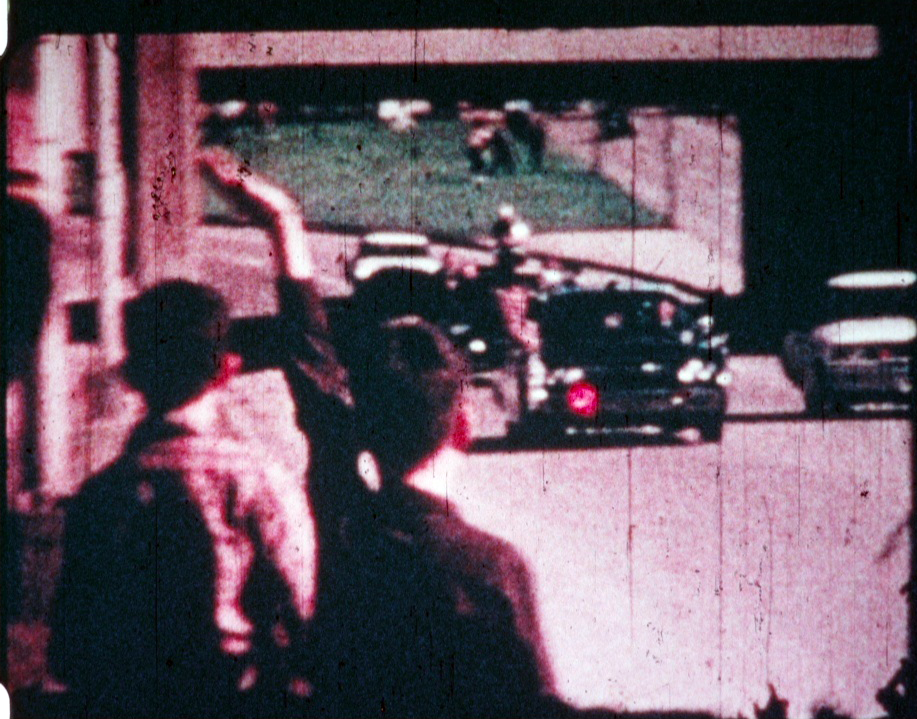 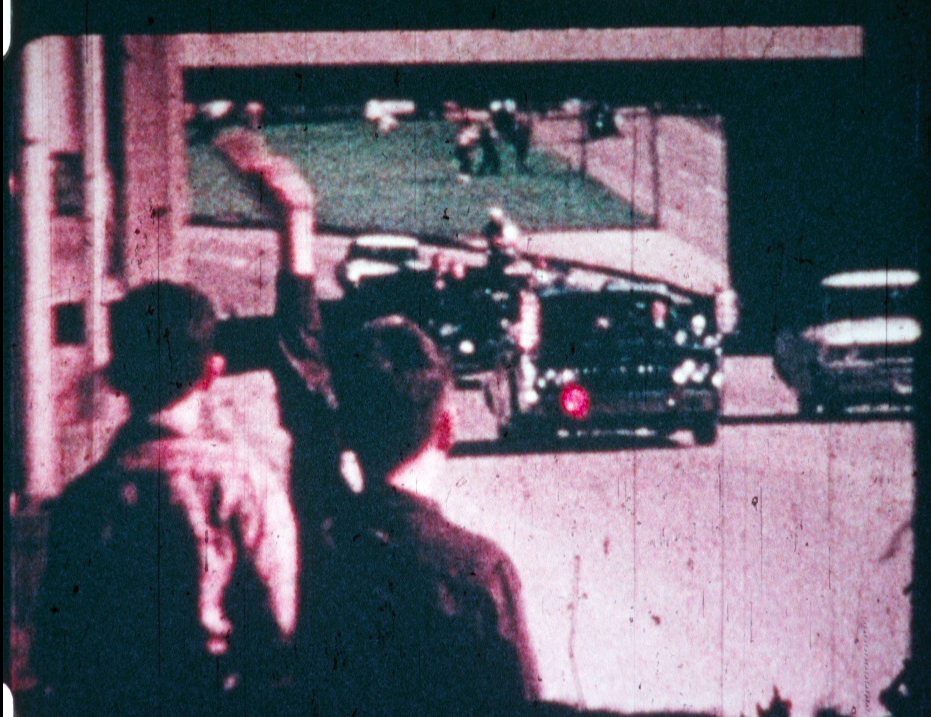 Mike’s observations prompted us to go back and examine the film frame-by-frame. When frame Daniel-16 was examined closely, however, we discovered what was really happening in the JFK limousine. There are four distinct figures visible!  We know William Greer, the driver, and Roy Kellerman, riding shotgun, are seen in the front seats, and what appears to be Jackie’s pill box hat can be seen in the middle, but who is the other person? 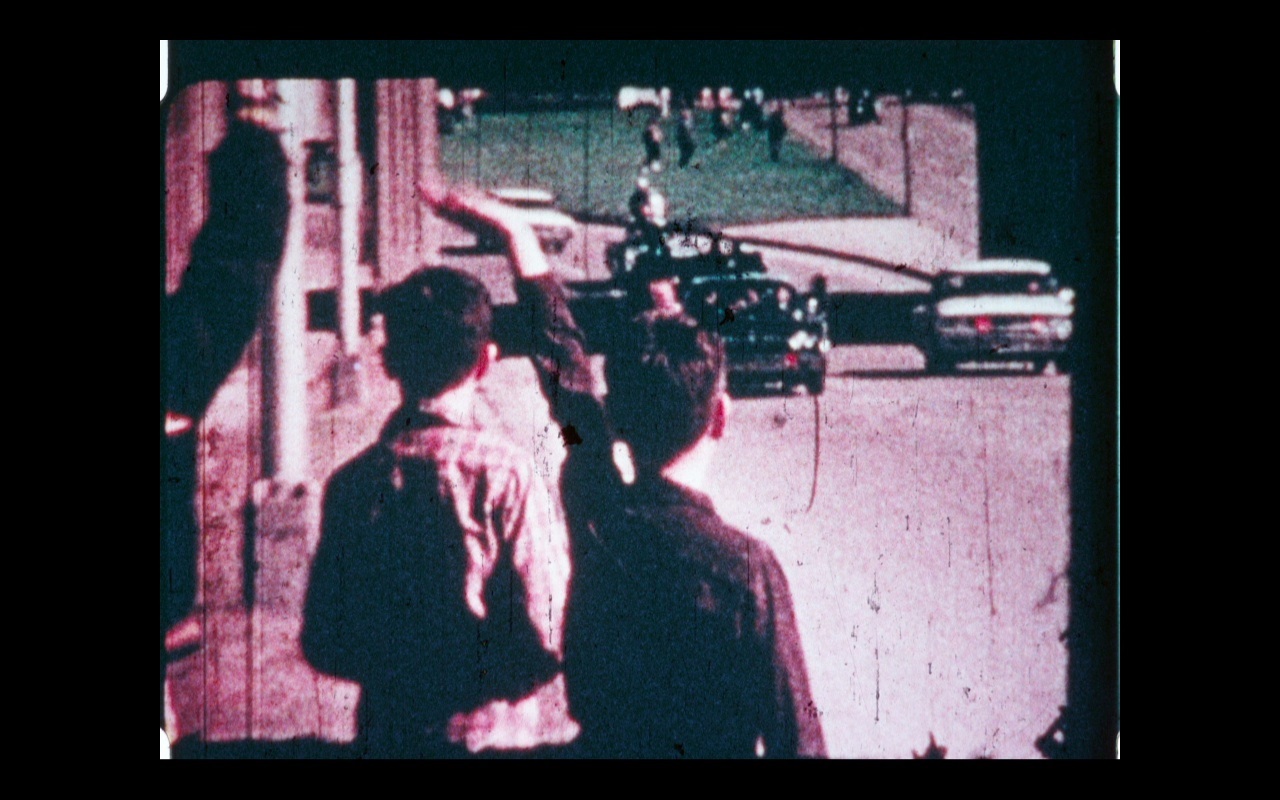 Kellerman is clearly seen looking back over his left shoulder, and there is another man looking to his right in the back seat.  Yet many of the subsequent frames after Daniel-16 appear to have been tampered with, obliterating the area noted by Machanska: 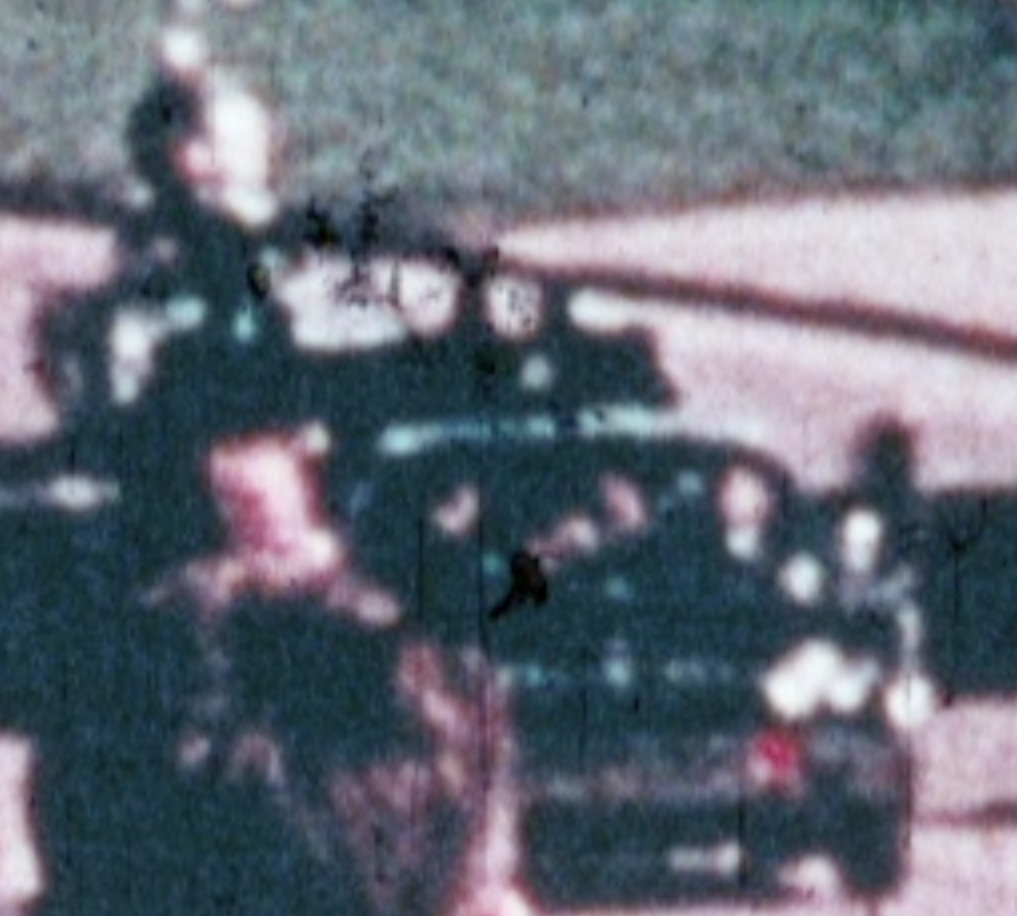 Here is a super close-up: 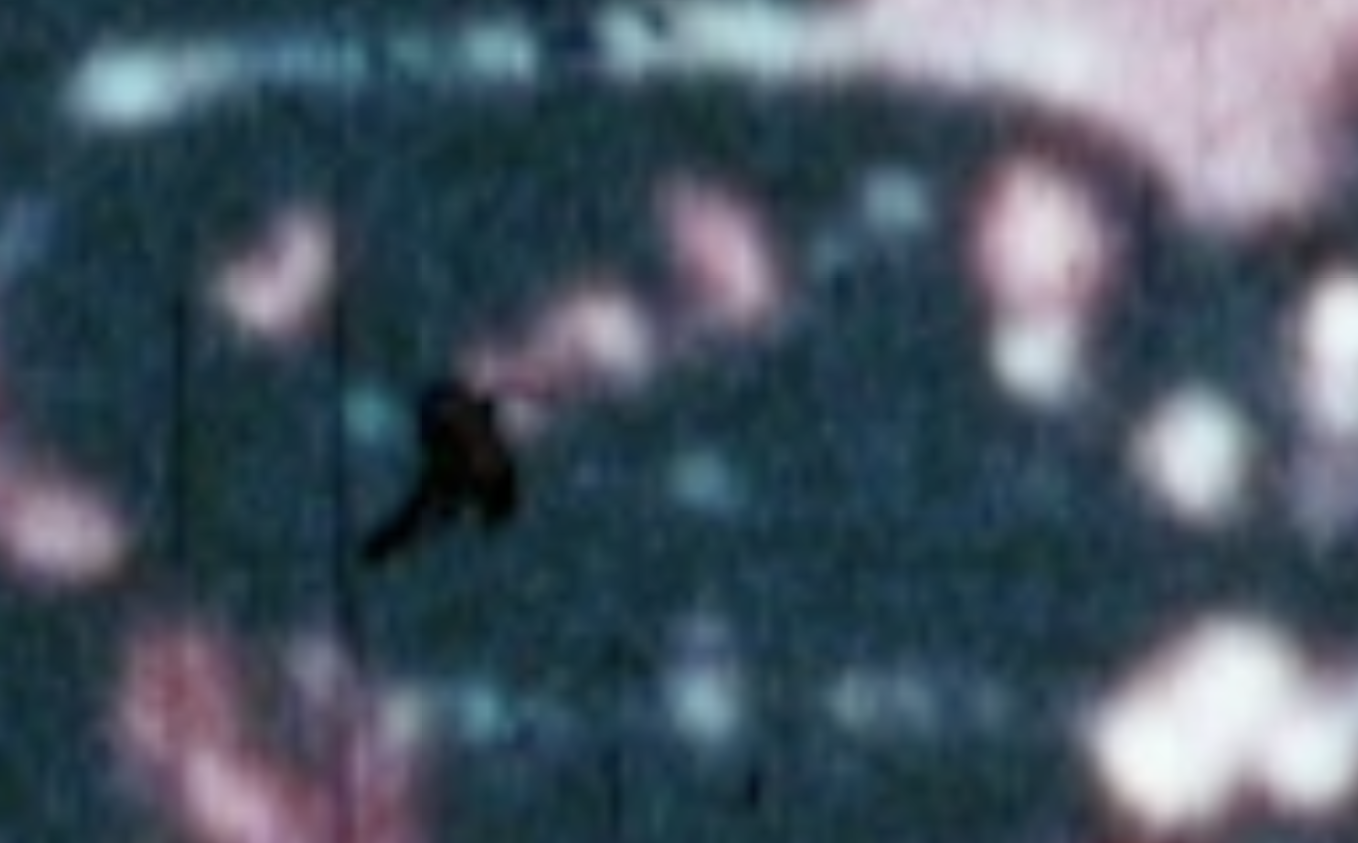 This animation shows the movement in Daniel-15 to Daniel-25:

At Daniel-16, Governor Connally is out of sight laying on Nelly’s lap, as seen in Zapruder film frame Z389, and the moribund President is laying to his left, below the level of the back seat: 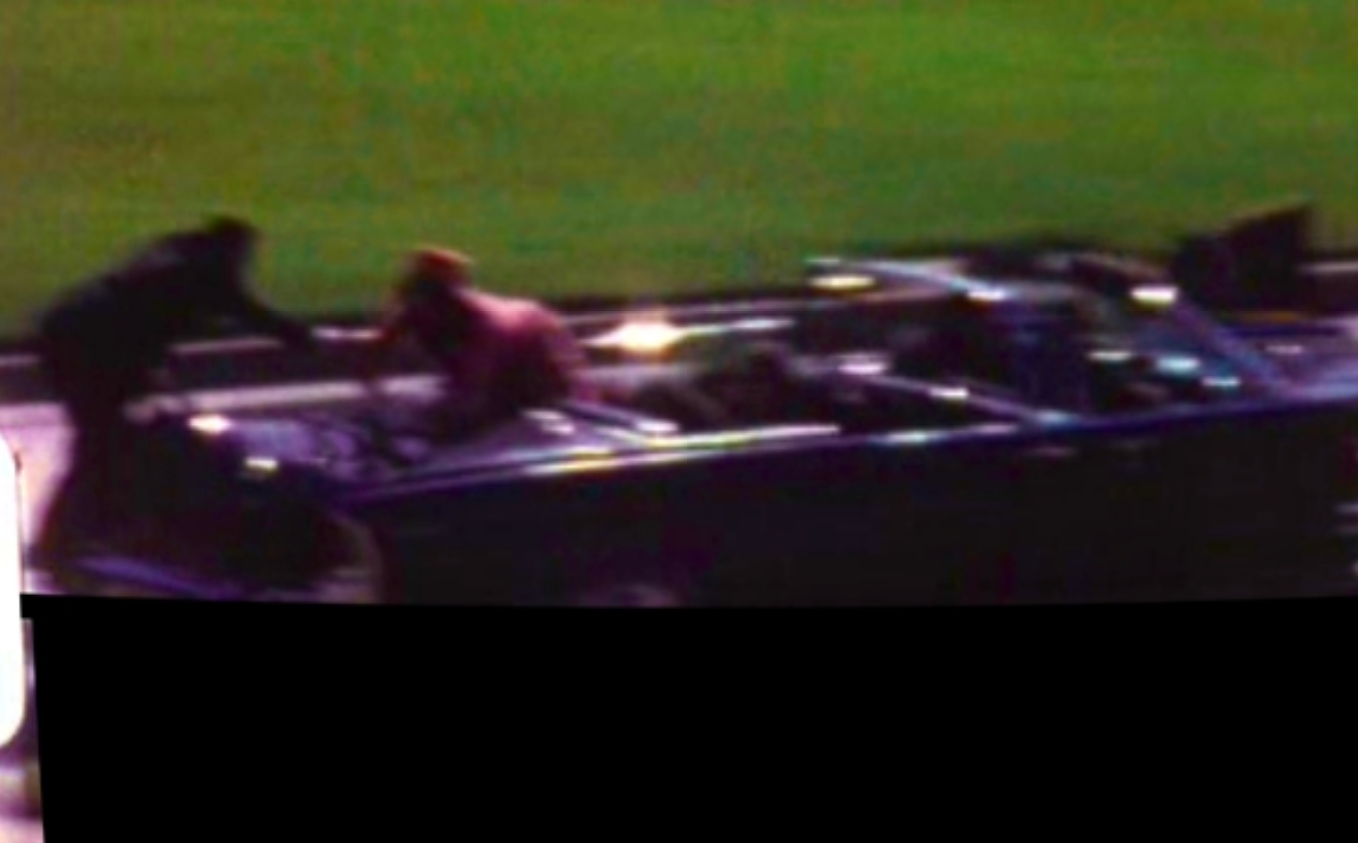 Here is a scan of frame Z371 from my copy of Life Magazine: 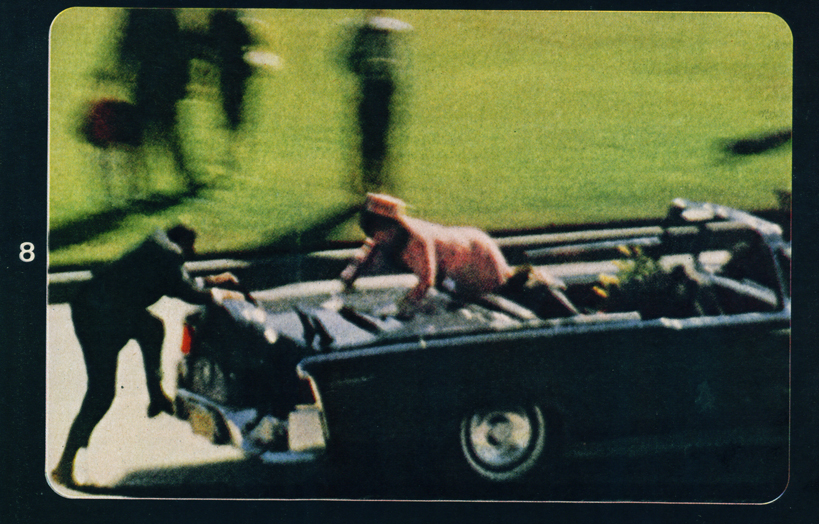 Also, the “hero” of the day, Clint Hill, is still trying to crawl into the limousine as late as frames Z445 and Z466, as it enters the triple overpass tunnel.  According to his own account, Hill laid over both the President and First Lady , where he was close enough to see the blowout in the back of Kennedy’s head. But as John Costella has observed, this is not seen in the Zapruder film: 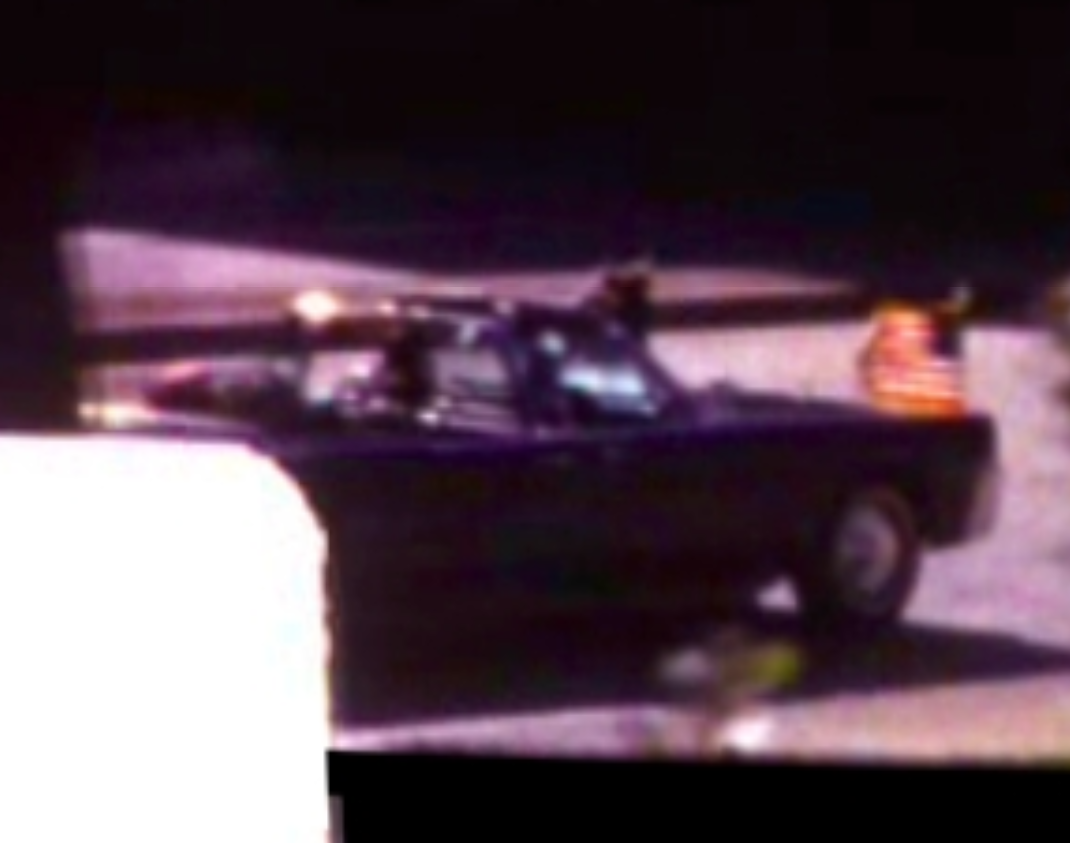 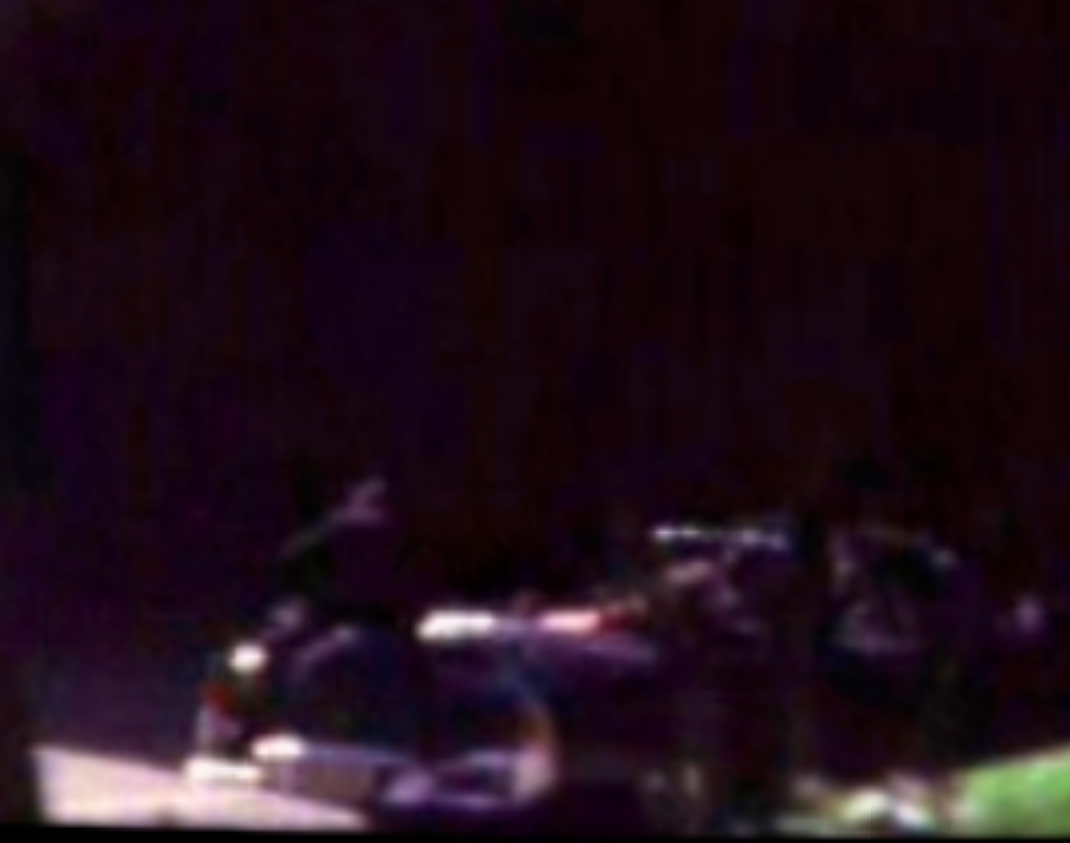 Back to our unidentified individual, he is clearly sitting straight up and looking to his right, his left profile and shirt collar visible through the windshield in Daniel-16.  Besides the Warren Commission testimonies of Connally and his wife shown above, it should be pointed out that Connally suffered a perforated lung caused by a bullet that went right through him and exited near his right nipple.  Obviously not the type of trauma that would have allowed him to sit up straight like our unidentified passenger.

As the limousine approaches the Daniel family, the darkening of the frames becomes more evident.  Here is frame Daniel-48 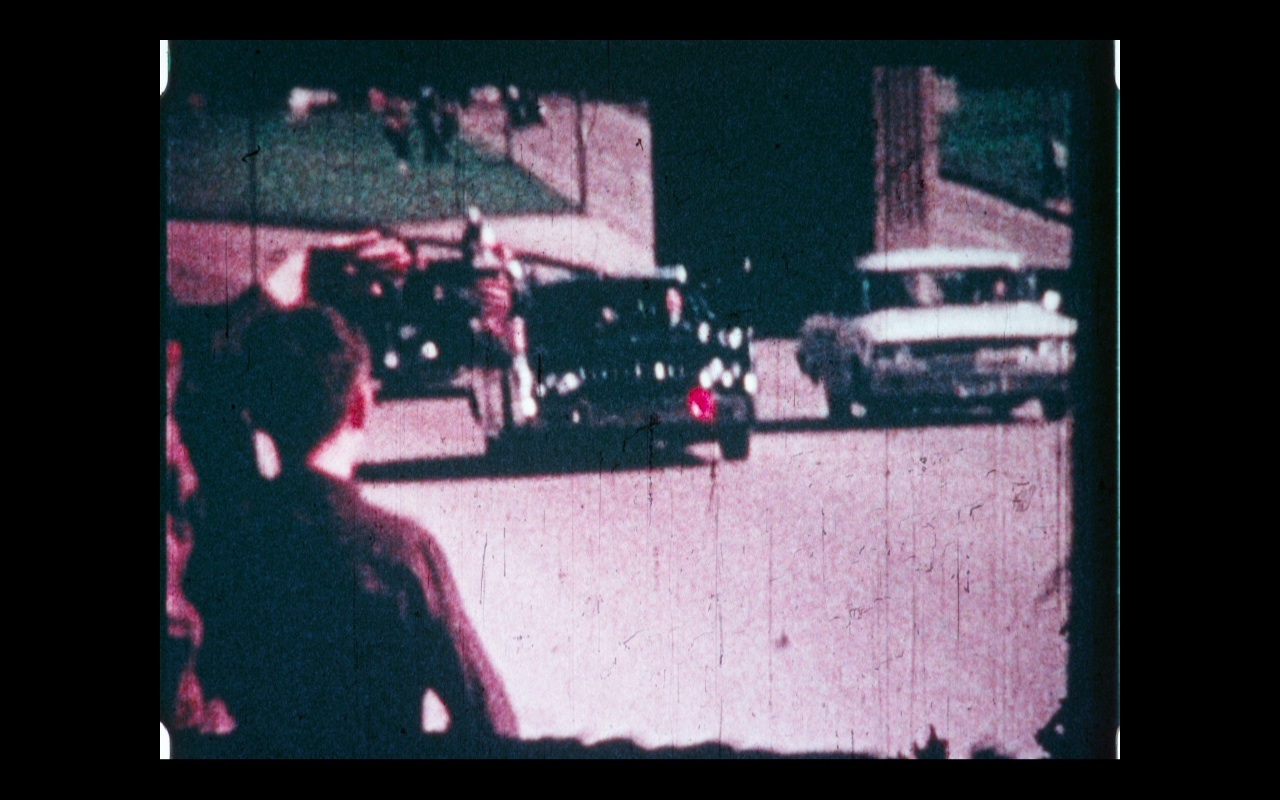 ….with the enlargement of the limousine. 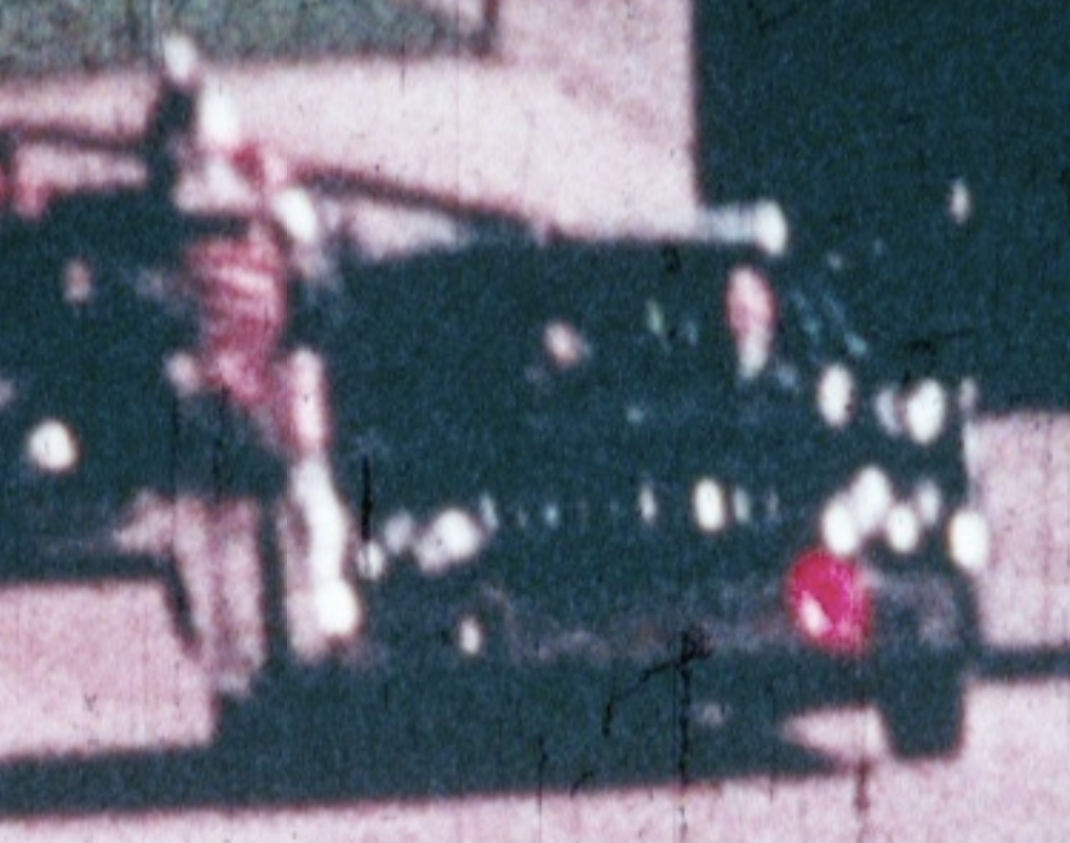 So what started with Mike’s keen observation of the obfuscation of the Daniel frames ended up raising even more questions as to what really happened on Elm Street when JFK was gunned down 22 November 1963.  Perhaps some of those questions might have been answered by both Sargent Stavis Ellis and Bobby Hargis when they had this to say in the Newcomb tapes of 1971: 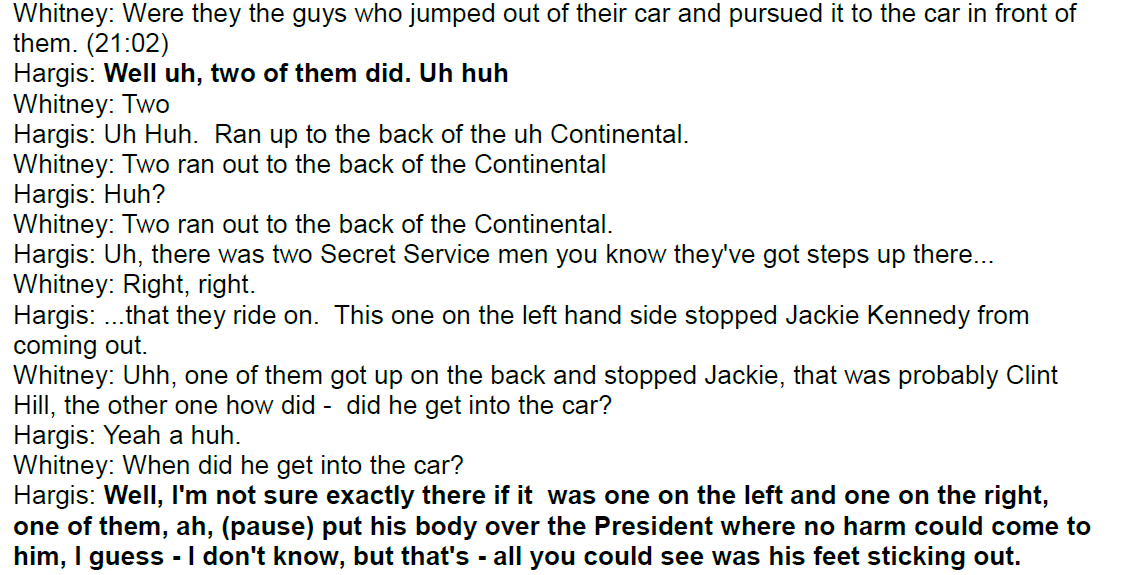