A relatively new plugin for Blender by the name of “Facebuilder” enables modelers and 3D artists to save a lot of time and work by interpreting front, side, three-quarter photographic views into a working 3D mesh that can be exported into other 3D modeling and gaming design applications.  It can be applied to the JFK case by helping us differentiate morphological differences between Lee Oswald and Billy Lovelady in the man in the doorway debate.  Imagine creating an animation showing Lee and Billy playing rock- scissors- paper, or flipping a coin, to see who will end up being the patsy of the JFK assassination since both were standing in the doorway of the TSBD at the time.

After messing around with it a bit, we were able to produce the following: 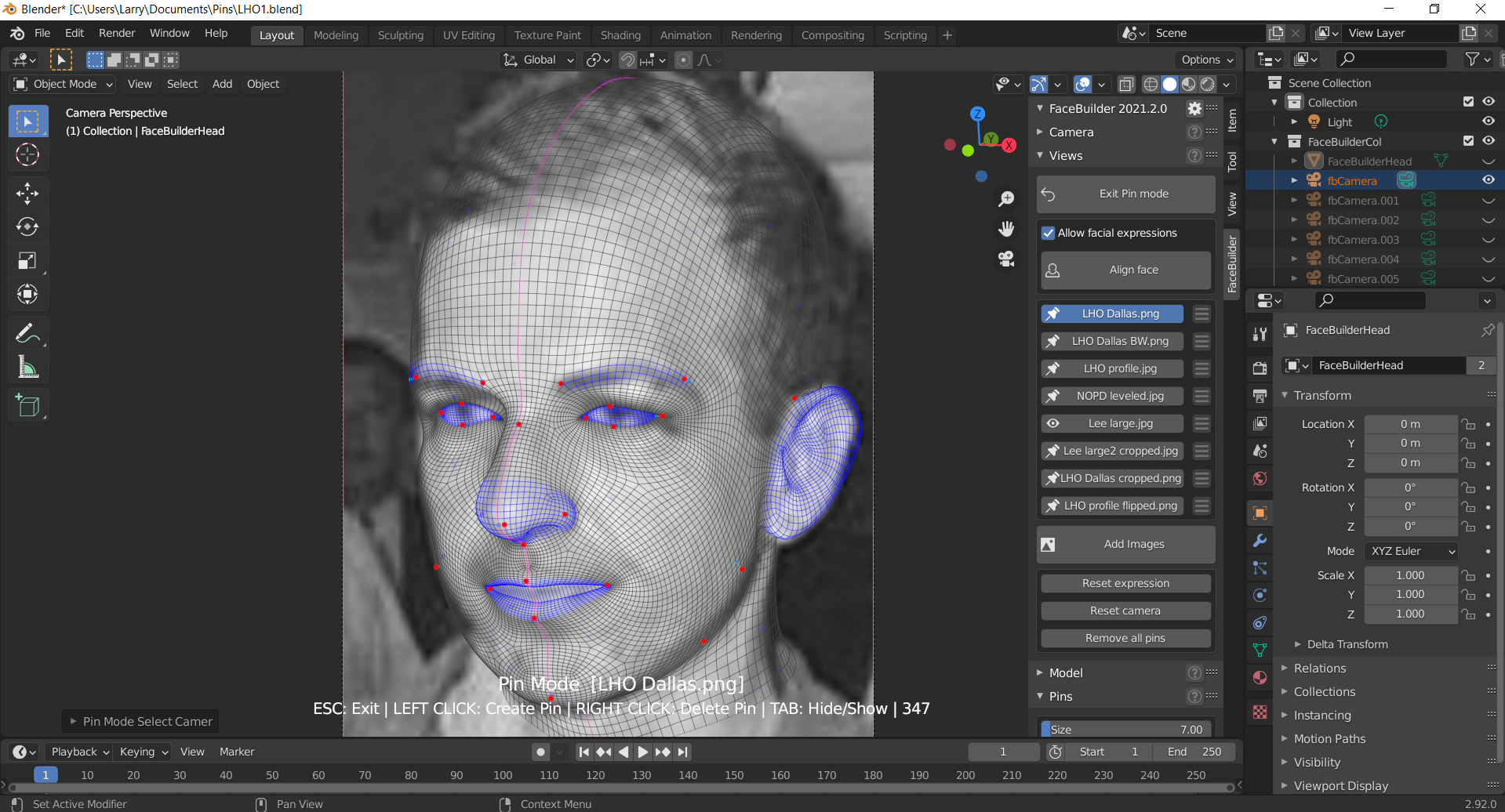 The mesh is created by placing “pins” (red dots above and below) onto key features of the reference images, and then moving, stretching, and aligning these until we match the face in question.  After loading as many reference images as possible, the software proceeds to run an initial interpretation and pin placement which the modeler uses to start tweaking to their proper location. The key areas to work with, which appear in blue, are the ears, nose, eyes, and mouth. More pins can be placed in areas that need to be adjusted, however, many gurus recommend using only the pins generated by Facebuilder and adjusting these around because it allows for more symmetrical results. The model improves its accuracy and definition if the user adds other angles of the subject, even rearview shots so that the hair texture on the back of the head can fill out in the final rendering.  In the case of our two subjects, Lee and Billy, we have good frontal,  side shots, and three quarters to work with.  Additionally, Facebuilder allows the modeler to activate facial movements produced alone or in combination – by the eyes, eyebrows, and mouth –  which can be used to pose any expression necessary. 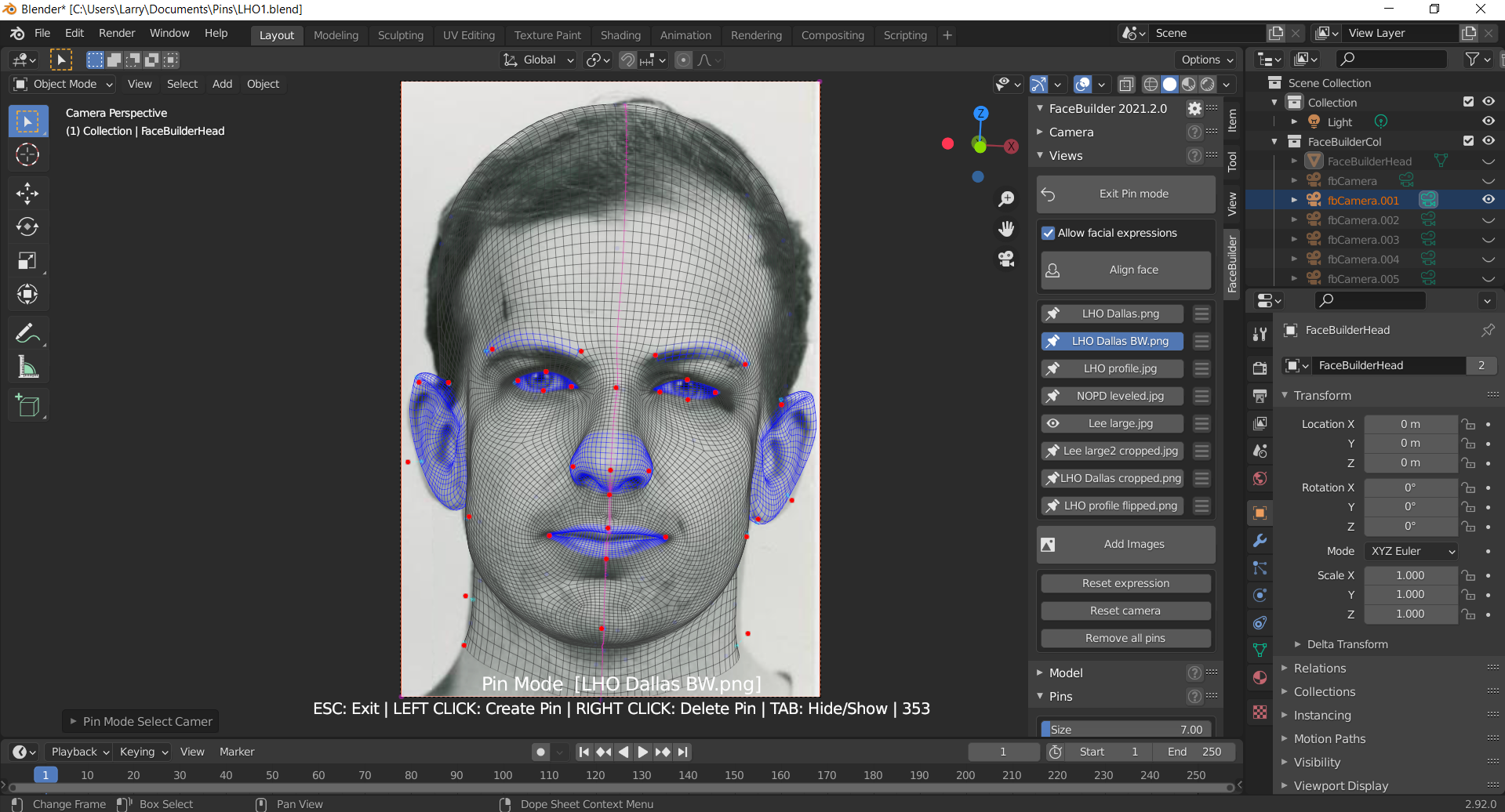 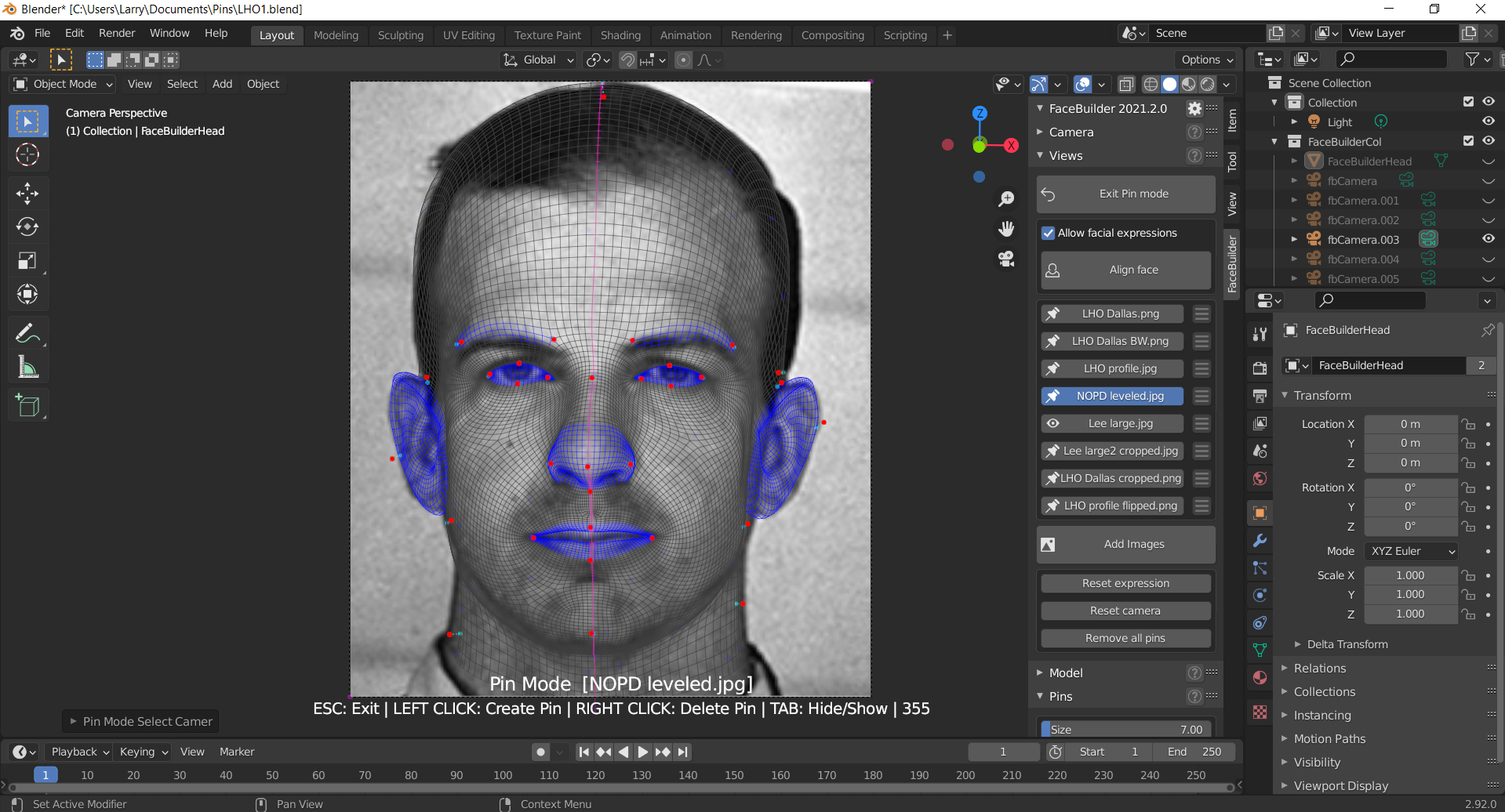 This is what the rendering of Lee Oswald looks like, based on the DPD and NOPD photographs as reference images. 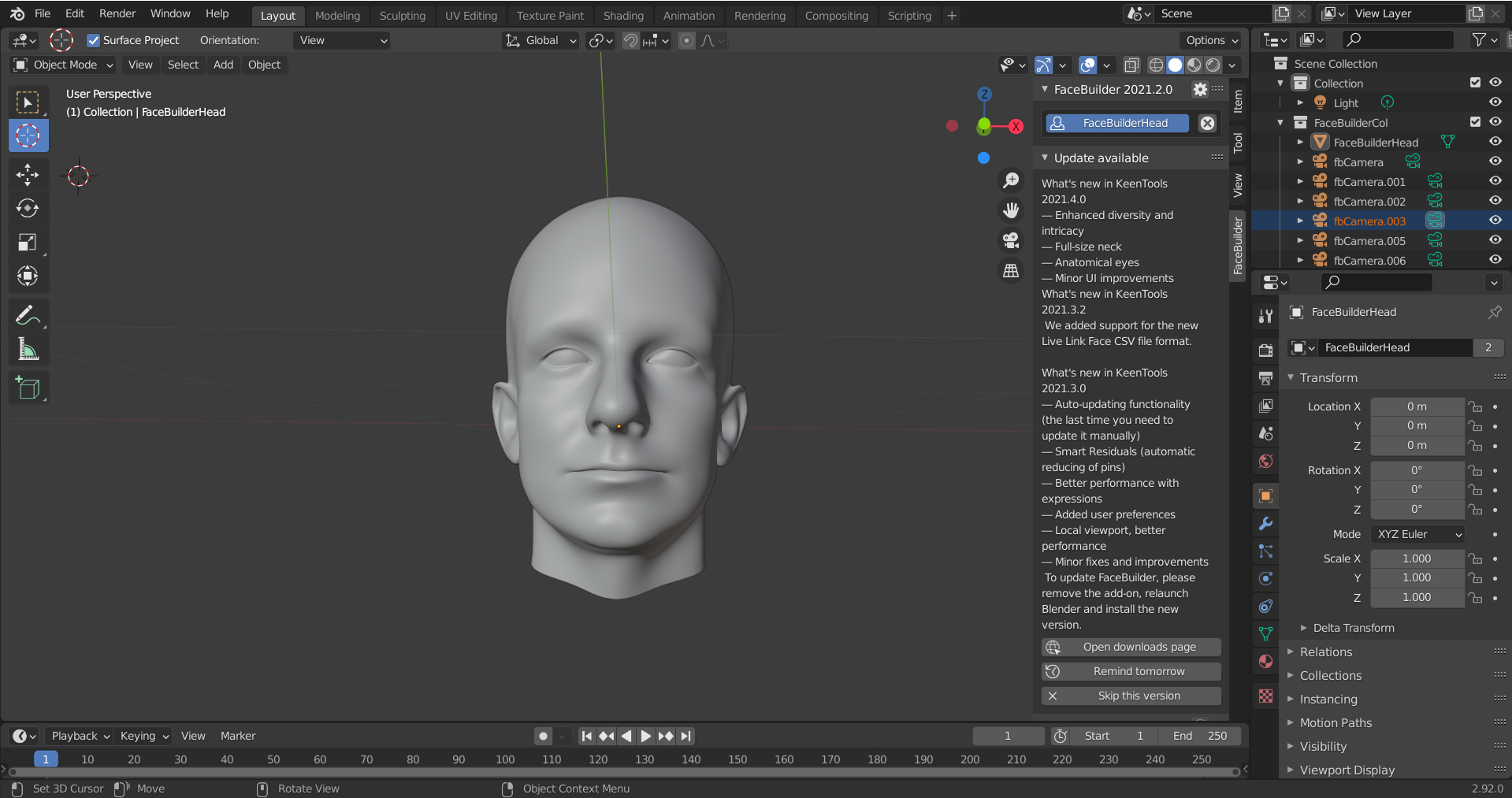 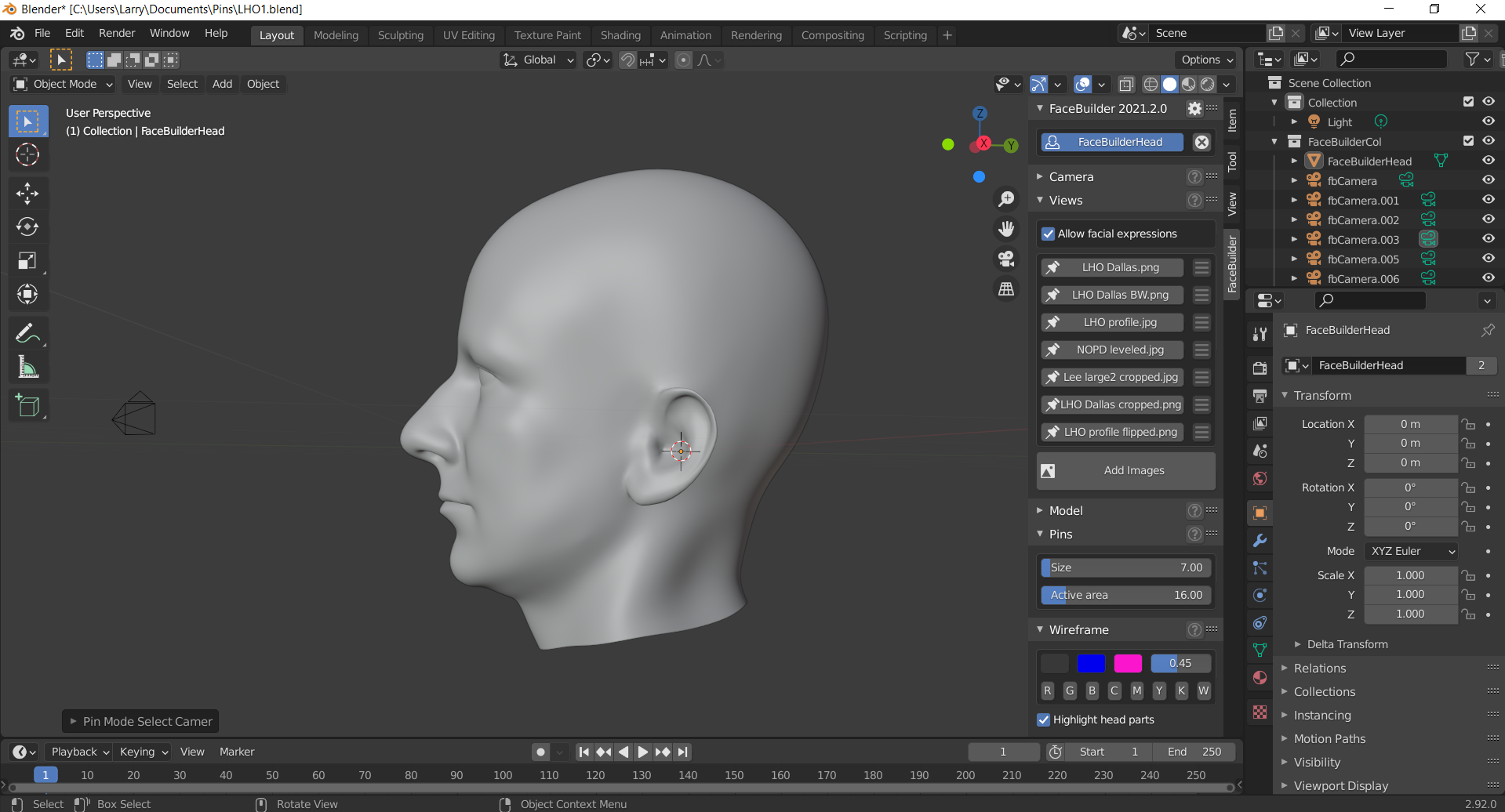 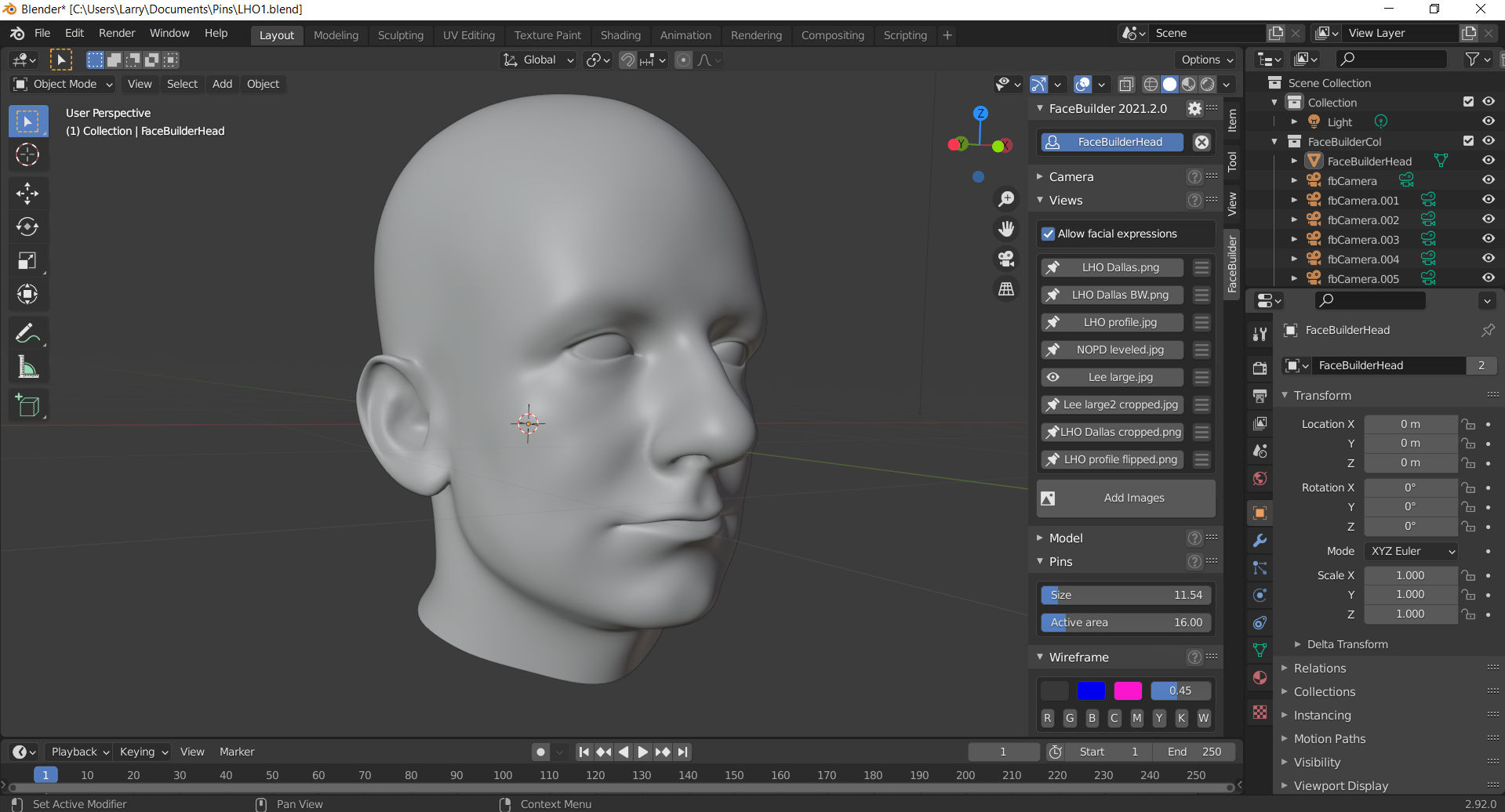 The next two images are the pin placements for the Billy Lovelady photographs using the FBI frontal and profile shots which were taken on 29 February 1964. 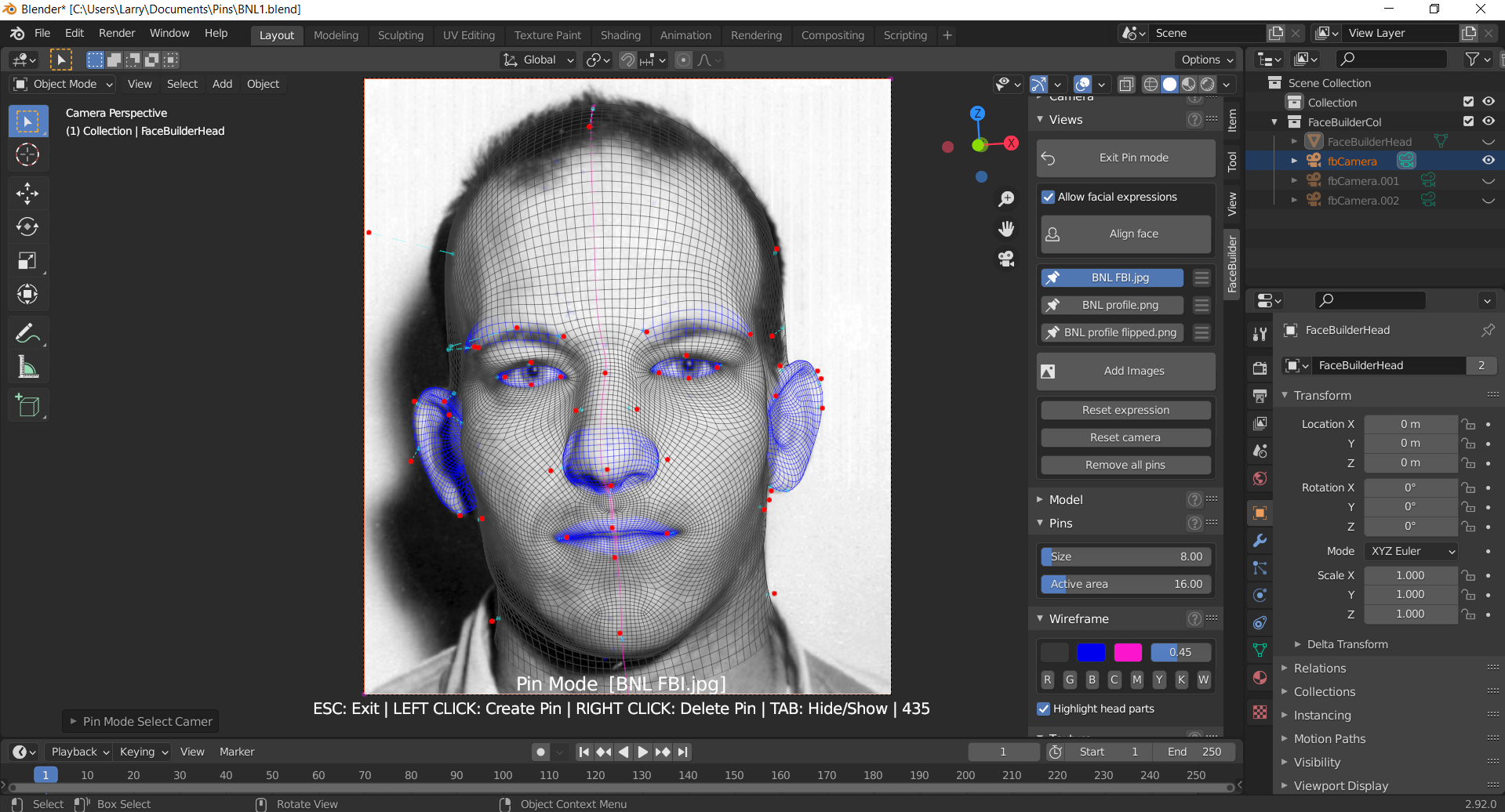 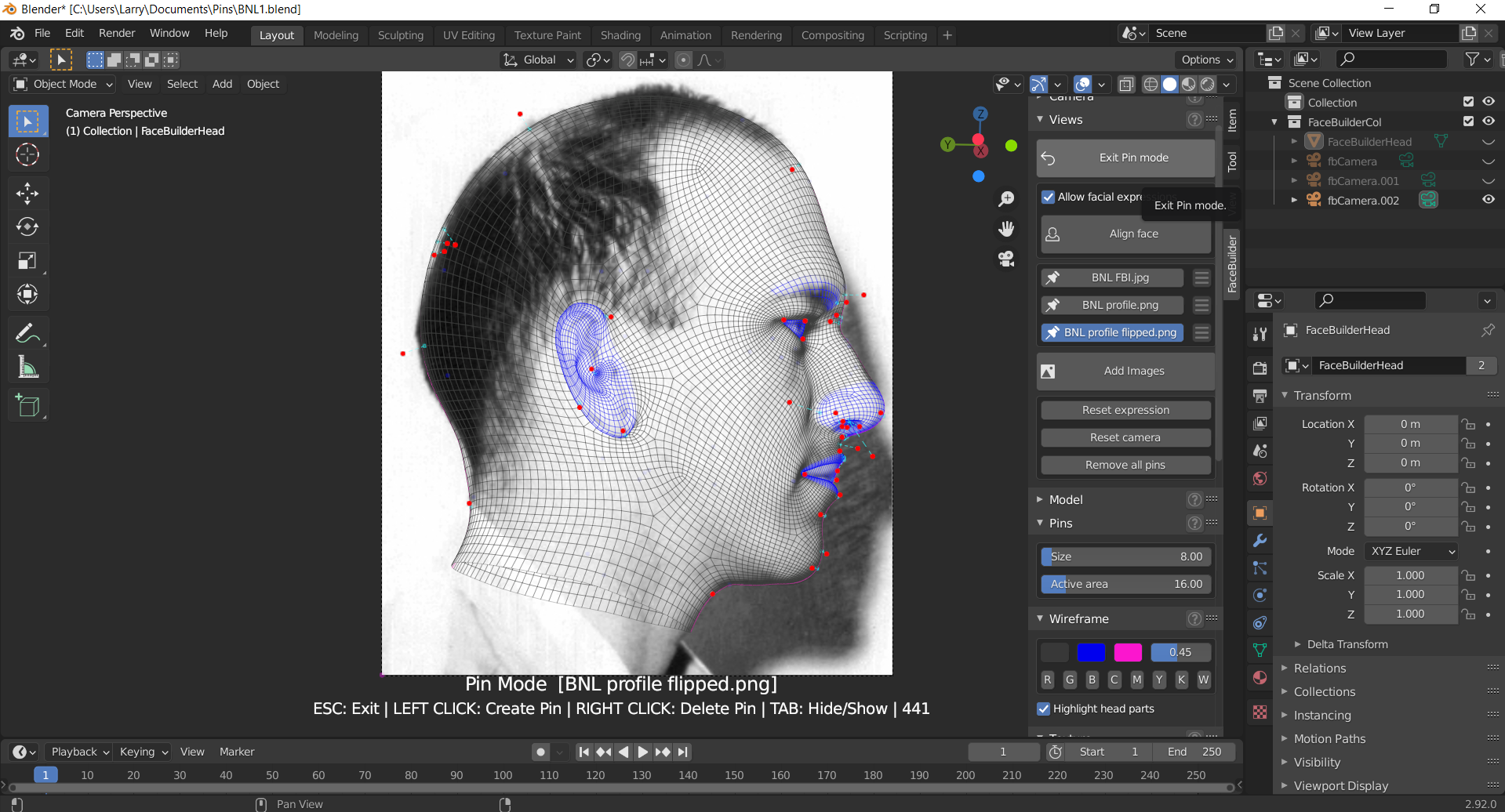 These are the 3D Blender renderings for Billy Lovelady in solid mode. 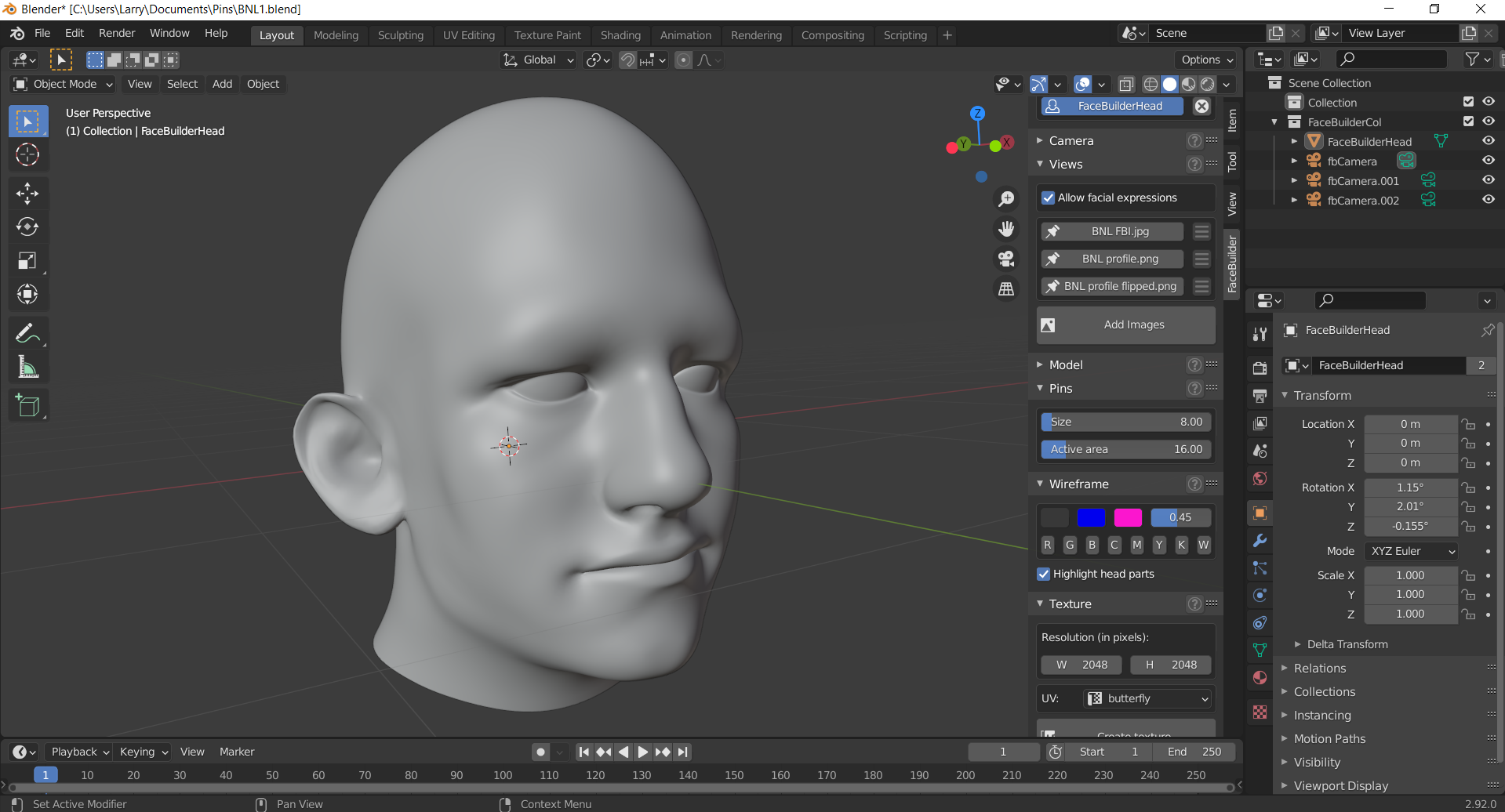 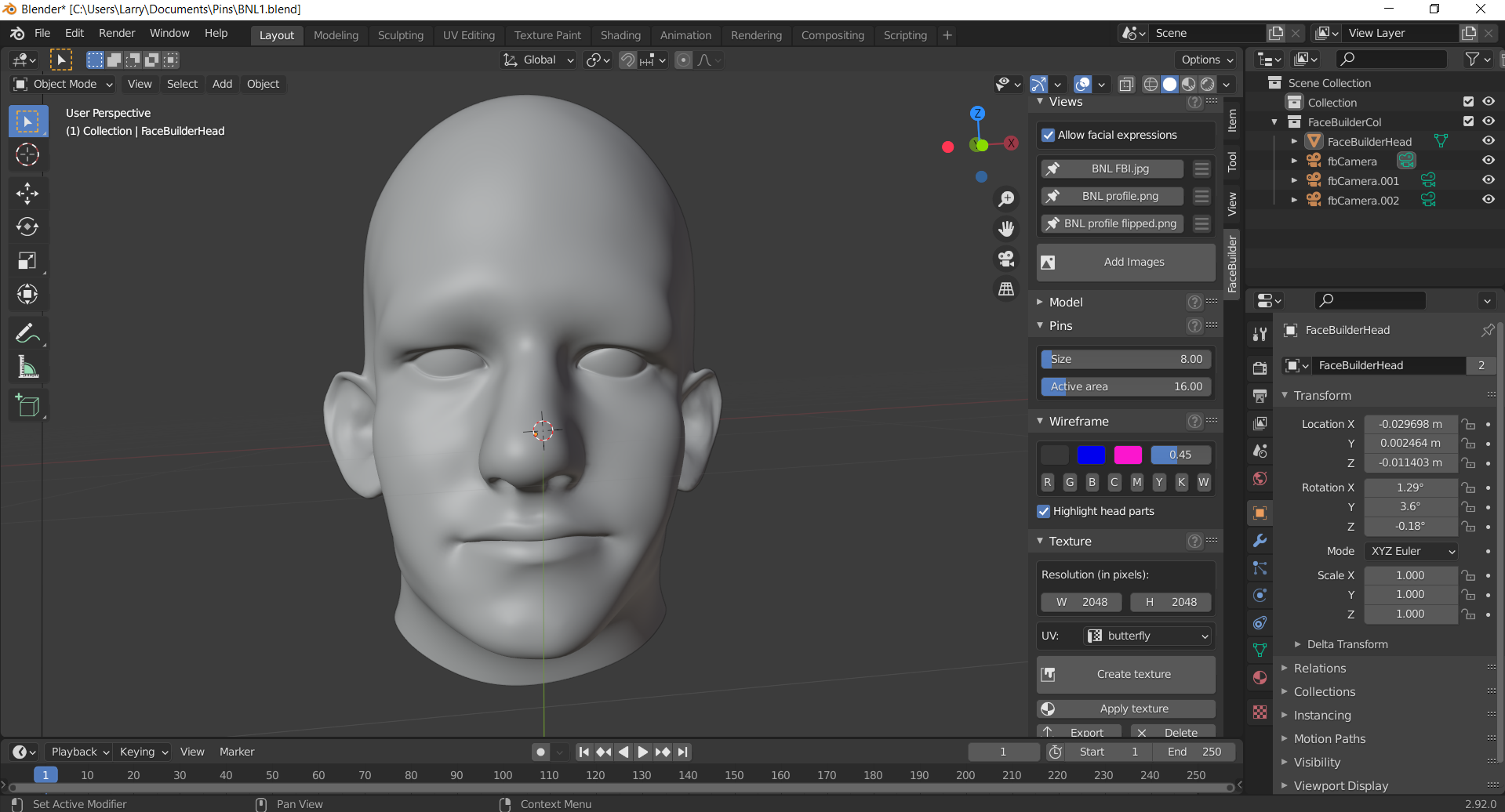 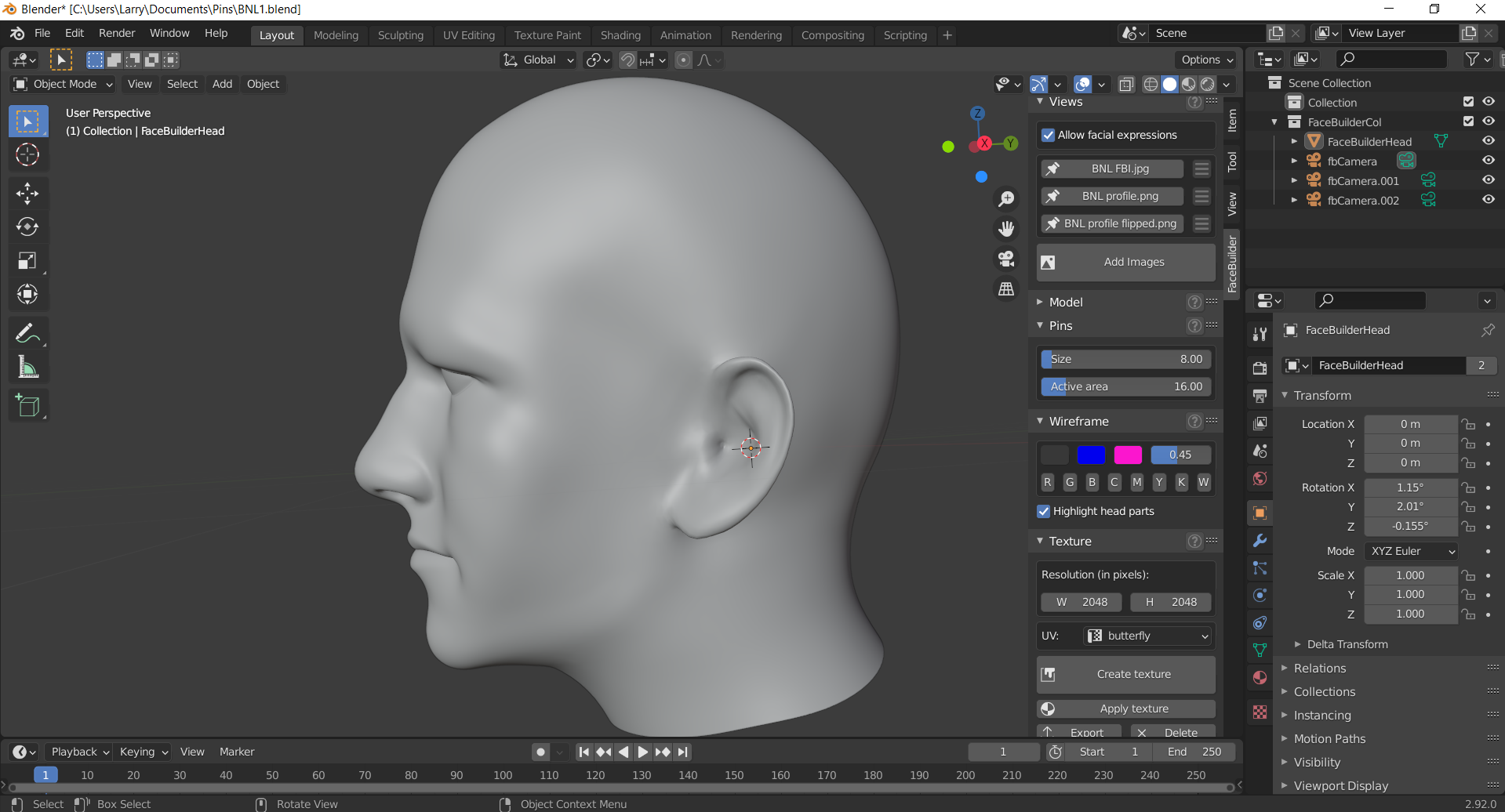 As seen above, this new plugin for Blender has unlimited potential in demonstrating Lee Oswald and Billy Lovelady’s anatomical differences, where many detractors and apologists have claimed they were practically “identical twins”, therefore Doorman had to be Billy because Lee was supposedly shooting Kennedy from the 6th floor of the depository.  For those interested, this blog is full of overlays and images that prove it was Lee in the TSBD doorway.