Almost 60 years after the JFK assassination, scholars are finally piecing together details of who might have actually been involved in the deed at the operational level in Dealey Plaza on 22 November 1963.

As happens time and again in this case, one rabbit hole forks into another, or two or three.  My interest in Otto Skorzeny arose when researching Cuban Freedom Fighter Eloy Gutiérrez Menoyo and William Morgan, who were part of the Cuban revolution, fighting against the Fulgencio Batista dictatorship in the late 1950s from the Escambray Mountains.  Few remember that the Gutiérrez-Morgan guerrilla arrived in Havana before Fidel Castro, who had been working his way from the Sierra Maestra, well East of the Escambray.  Morgan would be executed by Castro at the Cabaña prison on 11 March 1961 and Gutiérrez would be captured on 25 January 1965, spending most of the rest of his life in a Castro prison.  When Gutiérrez turned against Castro in 1960, unhappy with the Communist direction the revolution was taking,  he became the object of many libelous and false attacks in the now Communist-controlled Cuban media.  The Santa Maria incident was the perfect example, and the text of this report speaks for itself, with the preposterous idea that Gutiérrez and seventeen others would hijack a steamship to sail across the Atlantic and “liberate Spain” from the yoke of Francisco Franco’s decades-long military dictatorship.   Associating Gutierrez Menoyo with the former Nazi Otto Skorzeny appeared to follow this plan.

The report states that Gutiérrez Menoyo supposedly “stopped in Madrid, where he contacted Otto Skorzeny”, the Nazi super operative who was once dubbed as the “most dangerous man in Europe” by the Allies (Netflix documentary), and who carried out many special commando-type and paramilitary missions for Hitler, including the daring rescue of Benito Mussolini from house detention in a mountain resort at Gran Sasso on 12 September 1943. The allies were so afraid and paranoid of Skorzeny that right before the Battle of the Bulge in 1944, General Ike Eisenhower had to be ensconced in a secret location in Paris for fear of being the object of a Skorzeny kidnap attempt!  The reason for “Avance” trying to link Gutiérrez Menoyo to Skorzeny is unknown and the only document that exists online where both are mentioned is the one shown above. On the other hand, it would not be far-fetched that he would give Gutiérrez an audience, because Skorzeny had been pitched to get rid of Castro (pg 307 Ganis) and was known to work exclusively for anti-Communist entities.

In fact, this CIA document reporting on an article published in Perú in 1966 informs the reader about precisely this type of operation — ironically one  which was vetoed by Kennedy himself: 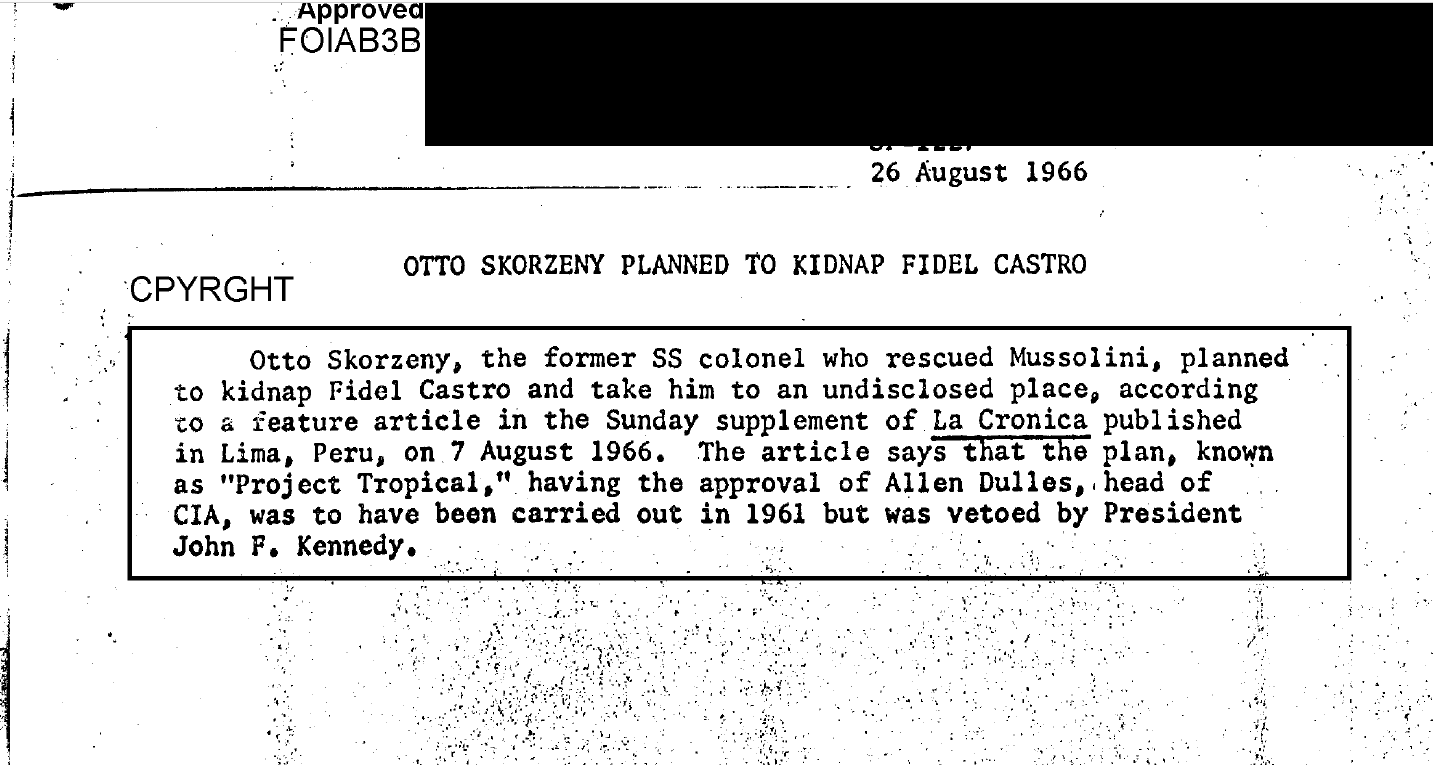 Who was Otto Skorzeny?

“The Skorzeny Papers” by Ralph Ganis has been out since 2018.   Ganis obtained the near 2000-page Skorzeny document collection at auction in 2011 and worked for seven years on his book.  Despite the lack of proper referencing of documents cited by the author, it is a compelling piece of work, which allows researchers to peek into the turbulent world of post-WWII Nazi associations, movements, and relocation. It also reveals the extent of the CIA’s ultra-secret nexus with Skorzeny.   This relationship with Skorzeny, however,  pales in comparison with his recruitment by the MOSSAD to set up and take out Nazi rocket scientists who dared work for any of the Arab countries.  Netflix also has a new documentary on Skorzeny with tons of new information from the Spanish point of view.

Skorzeny lived in Spain for 25 years, protected by Spanish Dictator Francisco Franco after slipping through the nets cast to catch Nazis, escaping Germany towards the end of WWII. Skorzeny would eventually be found innocent of any war crimes when legendary super-spy Yeo-Thomas, known as the “white rabbit”, testified on his behalf.  He later worked for several governments and was in essence, a mercenary who had teams of well-trained operatives who could be deployed anywhere at a moment’s notice.  He made a fortune when the U.S. recruited him to broker the construction of  United States Air Force bases in Spain to be used by NATO, all with the approval of the Generalissimo. He was also at the top of the CIA list of potential recruits to join the agency because of his vast knowledge of the German military, scientists, and politicians, one of which he would later set up for assassination by the MOSSAD.  Rocket scientist Heinz Krug, who was overseeing the Egyptian rocket program, which the Israelis were totally against, was lured by Skorzeny to meet in Germany where he would disappear and never be heard from again (Netflix).  As Ganis points out, Skorzeny was a vital connection in rounding up Nazi rocket scientists during “Operation Paperclip”  so he knew exactly where to find them (p 214).  Finally, recent revelations by author Ganis indicate that either Skorzeny or members of his network working as cutouts for the CIA might have been involved in the JFK hit where one passage used by the author hits the reader in the face right off the bat with the following ominous message:

“Mr. Director, only you can clear Otto Skorzeny of the guilt of being [an] agent in the Dallas operation with [the] passive complicity of Allen W. Dulles.” EXCERPT FROM A LETTER BY FRENCHMAN PAUL GLUC, MARCH 1975 (Ganis, Major Ralph P. . The Skorzeny Papers: Evidence for the Plot to Kill JFK (p. 27). Hot Books. Kindle Edition.)

“Skorzeny became an independent paramilitary adviser to U.S. and French intelligence in the early 1950s…..the presence of these men in the Skorzeny papers indicates the experience level and lethality of Skorzeny’s paramilitary network.” (p 242) Ganis also provides compelling circumstantial evidence indicating that Skorzeny’s profile regarding his travels and engagements with the CIA point to the possibility that he could have been the elusive QJ/WIN.(pg328)

Ganis writes that Skorzeny had ties to Dallas Oil since 1952 when he negotiated a deal to bring Texas companies to Spain to drill for oil. Consequently, he traveled frequently to Dallas and knew all the oil barons and power brokers of Dallas. (pg 200)  Ganis continues:

“Skorzeny’s meeting with the Meadows oil group in the fall of 1952 would result in a long partnership between him and the American General Oil Company that stretched from 1952 until at least 1963. Clearly, the Texas oil connections to Skorzeny mentioned above are extremely important given the profile of its participants and the fact that Skorzeny was connected to CIA cover organizations.” (Ibid p. 202).

“His commando organization for hire was named International Fascista” (Mae Brussell article The Nazi Connection to the JFK assassination, The Rebel January 1984)

“SS Colonel Skorzeny’s CIA agents participated in terror campaigns waged by Operation 40 in Guatemala, Brazil, and Argentina. Skorzeny was also in charge of the Paladin mercenaries, whose cover, M.C. Inc., was a Madrid export-import firm.”

The following document, which was released 12/15/2021, has the redactions showing through and makes a reference to the “Madrid clandestine interrogation center”, the same one which was run by Skorzeny, the former Nazi who would later work for the CIA out of Spain, where he established his base in 1951. This document might be the smoking gun that elevates and connects Skorzeny to the top echelon of the U.S. government which included both JFK (by connection to his brother) and RFK, as seen in this Operation Mongoose meeting of the Special Group Augmented dated 3 May 1962.  Noel Twyman wrote the following about this group in his book “Bloody Treason” pg 431.

“(William) Harvey took his orders from Special Group (augmented) which was chaired by General Maxwell Taylor and augmented by  Robert Kennedy. The president’s brother treated Harvey with utter contempt; he browbeat Harvey and his aides relentlessly. “ 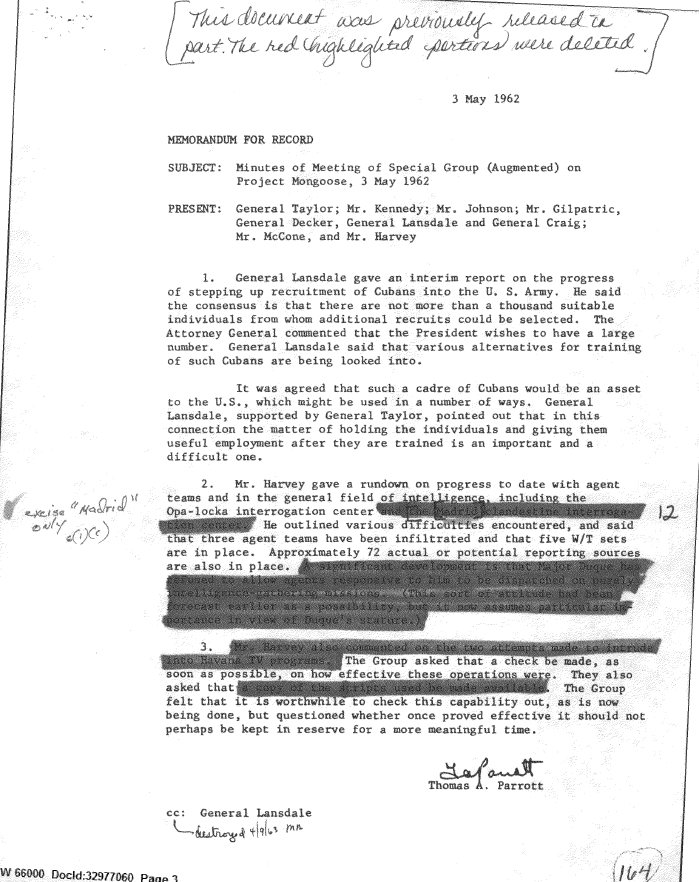 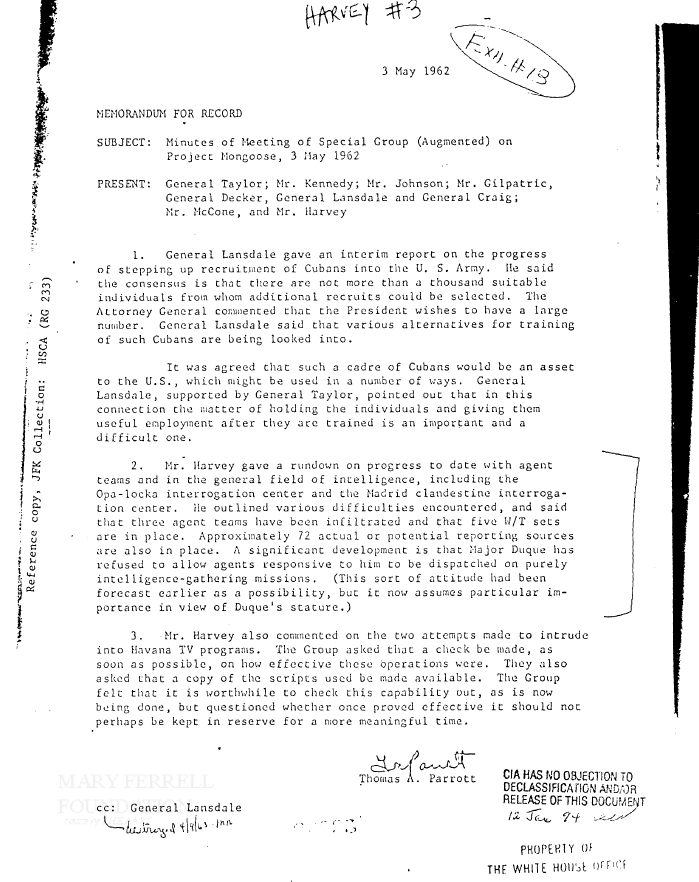 The reason for the redaction is clear now.   The Madrid clandestine interrogation center mentioned in these documents appears to provide more circumstantial evidence of William Harvey’s role in getting the mechanics in place on 22 November 1963, and by using untraceable assets from overseas provided by Skorzeny.  To that effect, his procurement of QJ/WIN for ZR/RIFLE purposes has been fully documented.  Within this possibility, we are left with two operatives who might have been involved — Jean René Souetre and Jean-Paul Filloil —  both of whom were in Dallas and deported within hours of the event.  Of course, they were not necessarily the only ones involved, whereas evidence abounds that at least three sniper teams were used.

Here is a recently declassified CIA document that informs about the expulsion of Souetre 48 hours after the assassination after having been in Dallas on 22 November 1963: 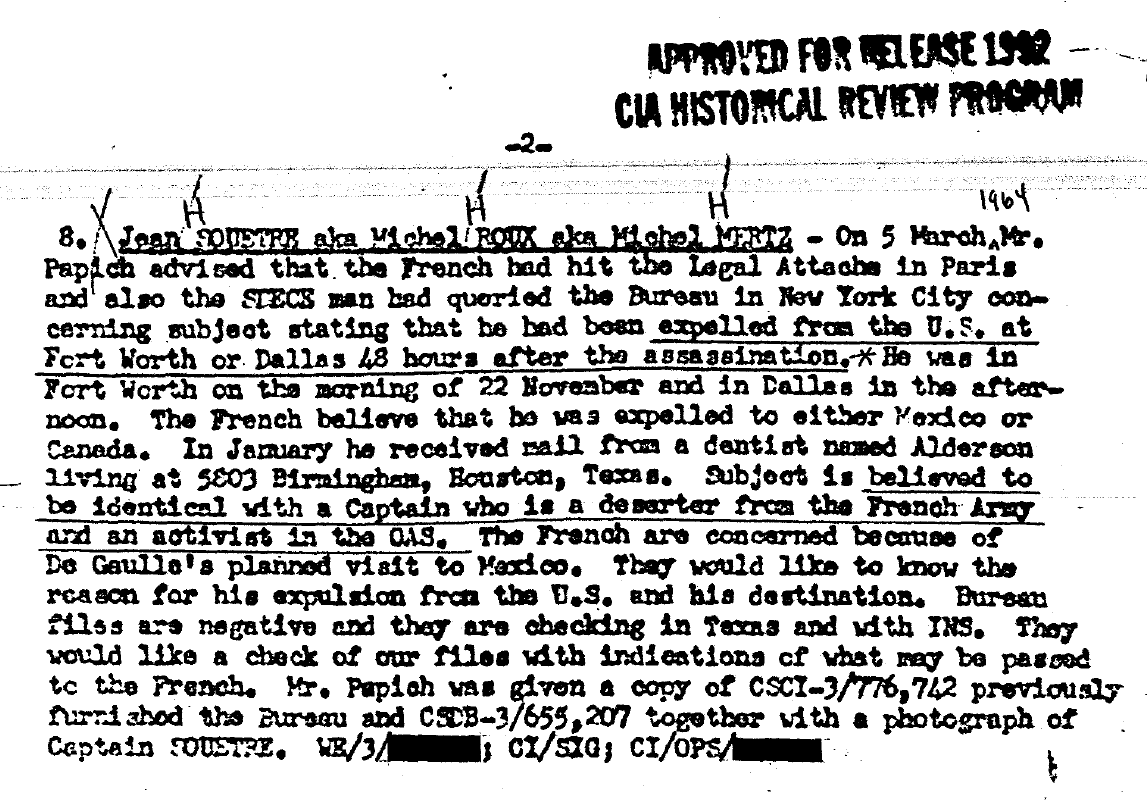 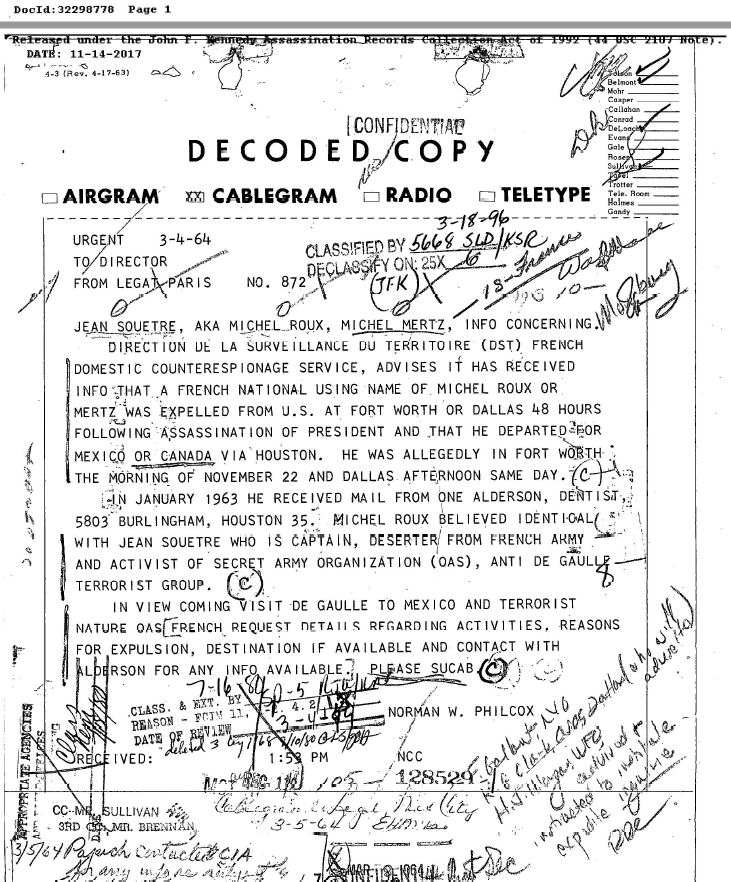 Here is Skorzeny flying in a private jet with two individuals Ganis has identified as Cord Meyer (seated), and David Atlee Phillips (from Ganis pg 187), however, researcher Doug Campbell has noticed the man standing is wearing his watch on his left wrist, where Phillips photos abound showing him wearing his wristwatch on his right wrist: 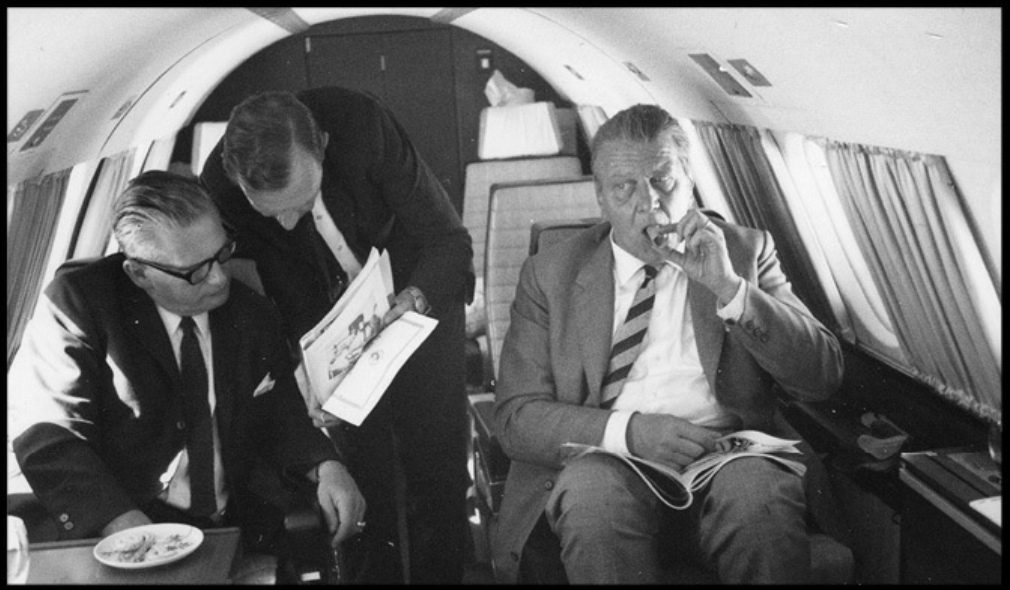 Were members of the  Skorzeny organization involved in the JFK assassination at the execution level? “The Skorzeny Papers” author Major Ralph Ganis certainly is convinced that he has found irrefutable evidence of this.  How does this fit in the LBJ framework of culpability?  Ganis’s research linking Skorzeny to Dallas Oil certainly brings him into the LBJ sphere of influence.  Being distinct entities in a universe of possibilities, where compartmentation is key, the use of Skorzeny certainly would have created an effective buffer of plausible deniability.  The inclusion of the “usual suspects” at the scene of the crime was paramount in achieving this.  With Skorzeny being a relatively new player in the kaleidoscope of whodunits out there, it will probably take a while to sort out where he falls in the ranking — determined by how strong the evidence of his involvement may be. Regardless, Ganis has definitely proven his points regarding the Skorzeny organization and its ability and availability to do contract work for governments.  The “Madrid clandestine interrogation center” document shown in this post supports his thesis and throws a veil of dark serendipity — had this turned out to be the entity that took out the President — with his brother Robert being mentioned in the 3 May 1962 Operation  Mongoose memo along with John McCone, William Harvey, Ed Lansdale, Maxwell Taylor, Roswell Gilpatric, and the other warmongers who celebrated the day of the JFK assassination, as they ushered in the era of the Deep State.

Authors note: visit this CIA website for reams of documents on Skorzeny