Some historical figures tend to go forgotten if not ignored altogether as the nonstop river of time and history flows on.  Others take on a larger-than-life aura because of their bravery and willingness to put their ideology above their own lives.

Such is the case of one Carlos Gutiérrez Menoyo.  Of course, his younger brother Eloy obtained fame and notoriety in the late 1950s early 1960s that Carlos never did, however, it was Carlos who paved the way for Eloy to take the baton and run with it in their quest to liberate Cuba from the clutches of first a nasty dictatorship, and second the communist state that came after the successful revolution that got rid of the dictatorship.  Unfortunately, neither of them was successful and only the accurate portrayal of their struggles remains as consolation.  The Eloy story is highly convoluted, where at times documents contradict each other.  That is not surprising because after he broke with Castro in 1960, the state-controlled media continuously painted him in a negative light.

The Carlos side of the battle, on the other hand, would certainly provoke special interest because of his international exposure in Spain and the European WWII theaters of war.  Who was this guy who almost singlehandedly changed Cuban (and world?) history had he taken out Fulgencio Batista that fateful afternoon of 13 March 1957? 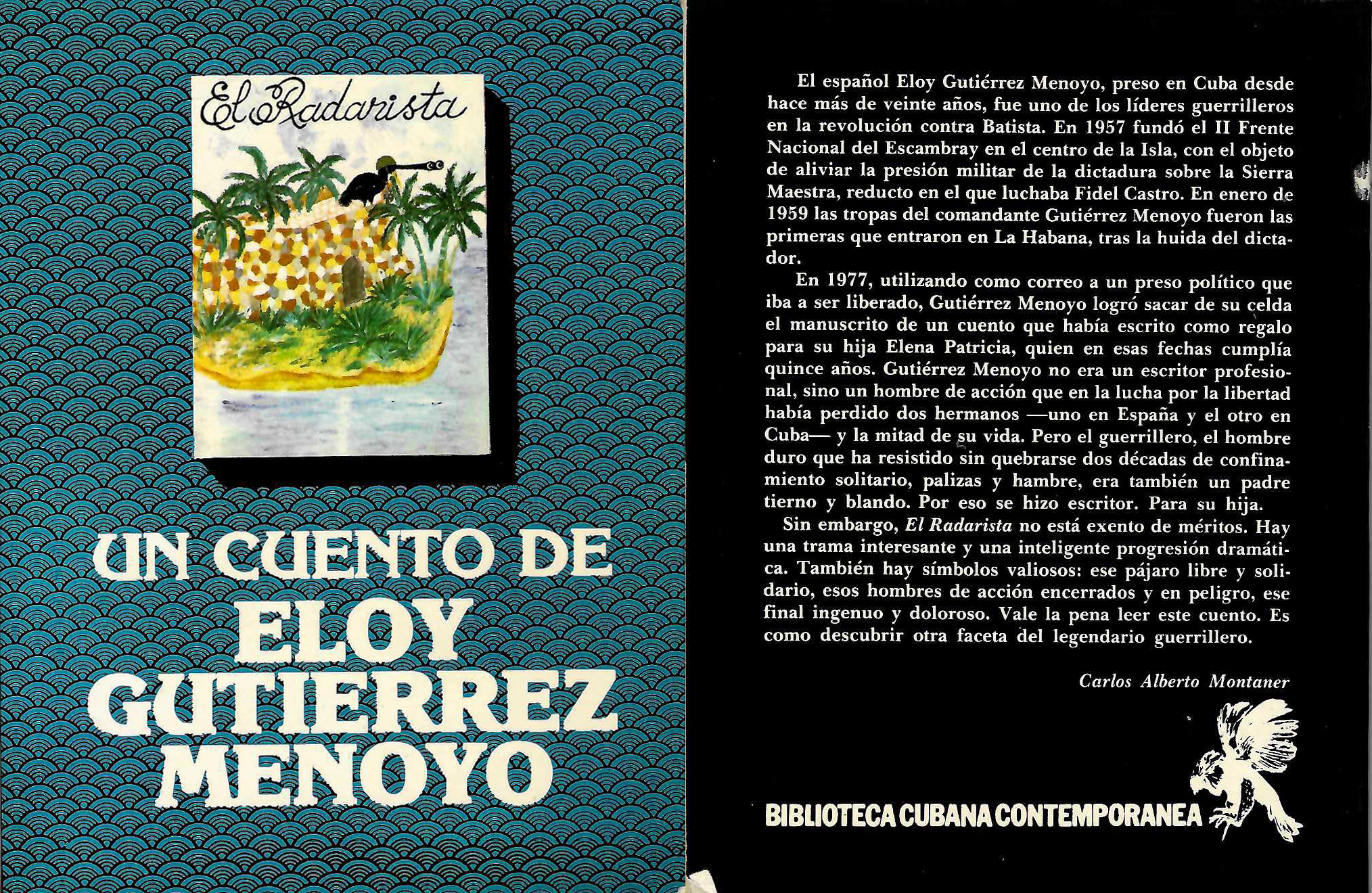 In a rare, self-published booklet titled “El Radarista,” a short story by Eloy Gutiérrez Menoyo, his daughter Elena Patricia included as its epilogue, an essay by an individual using the pseudonym Pedro Páramo (from the Juan Rulfo novel of 1955) in 1978, which traced the Gutiérrez Menoyo family tree from its early struggles fighting against Franco’s fascism in Spain where family patriarch Doctor Carlos Gutiérrez Zabaleta was drafted as a doctor into the republican army, to firstborn Jose Antonio who died in battle in October 1937, to their history in Cuba beginning with Carlos Gutierrez Menoyo, who became the military leader in Havana of the DRE (Directorio Revolucionario Estudiantil), and died in the attempted assault on Cuban dictator Fulgencio Batista’s Presidential Palace — to Eloy who would found the SNFE (Segundo Frente Nacional del Escambray) and later take Carlos’ place in the effort to liberate Cuba from the United States-supported Batista dictatorship.(Cambio 16, dated 15 October 1978)

It should be noted that Carlos would join the French resistance under General Phillippe Leclerc in France at 16 during World War II. He participated in campaigns in Africa versus Rommel.  He fought in Italy and later landed at Normandie, continuing all the way to Germany (https://www.ecured.cu/Carlos_Gutierrez_Menoyo).  He rode triumphantly into Paris upon its liberation (Montaner blog at http://www.elblogdemontaner.com/eloy-gutierrez-menoyo) and was a seasoned resistance veteran by the time Batista took over in 1952, having also participated along with Fidel Castro and Rolando Masferrer in the Cayo Confites attempt to invade the Dominican Republic and overthrow dictator Rafael Leonidas Trujillo in 1947.

Translation: Carlos joined the French resistance during World War II. There is a photo of him entering a liberated Paris aboard a Leclerc Division tank. He was a formidable warrior. 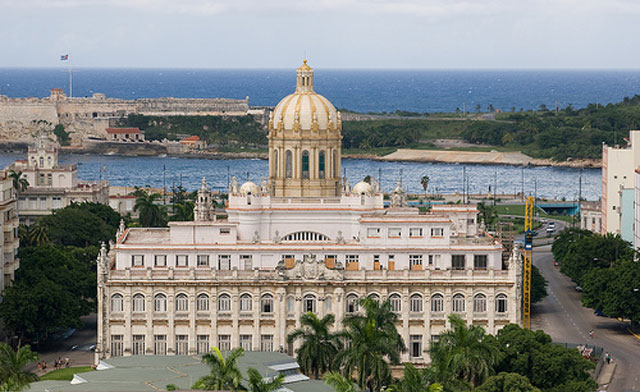 The only first-hand accounts of the assault on the Presidential Palace (above) on 13 March 1957 can be found online in Cuban news blogs. They are important narratives that define the character and courage of Carlos Gutiérrez Menoyo, elevating him to a sort of Paladin for liberty and justice. It is clear from these passages that had a backup team arrived to assist Carlos and his men, the outcome might have been entirely different and Fidel Castro Ruz would have been only an afterthought in Cuban history. Here are some of the most vivid accounts:

“Around 35 men, led by Faure Chomón and Carlos Gutiérrez Menoyo, left a safe house on 21st and 24th streets, in El Vedado, in a closed truck, together with two cars, towards the Palace. Upon arrival, Gutiérrez Menoyo got out of the car and with his machine gun struck down the posted guards and entered the building along with Luis Almeida, Pepe Castellanos, and Luis Goicoechea, and José Wangüemert, most of whom fell in action. In a few minutes, they were already in the office of the dictator Fulgencio Batista, who escaped through a secret door of the building to the roof, from where the garrison made easy targets of the attackers, and Carlos Gutiérrez and several of his companions were killed. “ 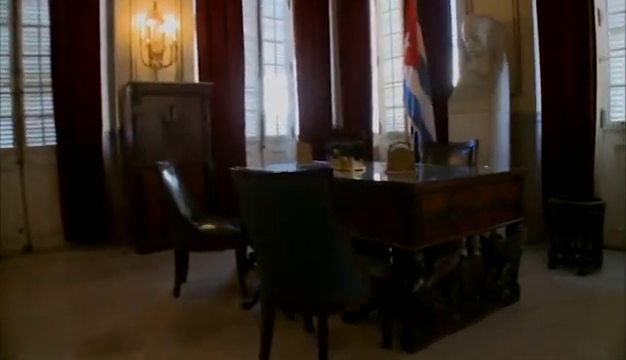 “At the Palace, Carlos Gutiérrez, Castellanos, Pepe Wanguemerty Goicoechea arrived at the Hall of Mirrors. “We got to the door of the abhorred dictator’s office -the latter testified-, we heard excited voices inside. Gutiérrez shouted: “Come out with your hands up!” The answer was a shot that shattered the glass door.” Carlos threw four grenades through the hole in the broken glass, the first three did not explode. “On the fourth, an explosion was heard. Instantly we went through the door firing our weapons. Two dead men lay on the floor. The office was empty. We tried to find a secret passageway that we had been told linked Batista’s office to his rooms on the third floor.  Impossible to achieve.”

“According to Goicoechea, “we left the office and headed towards a spiral staircase to try to reach the third floor. Useless. From the roof and the upper floor, they were firing at us mercilessly… We were already short of ammunition… Carlos’s machine gun had jammed, Castellanos had empty magazines. The support group hadn’t appeared anywhere.” 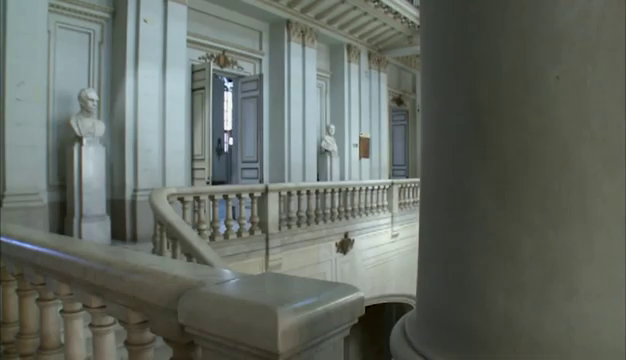 “Gómez Sartorio, upon entering the Palace, had taken to the left-wing of the building. “I advanced to the bottom, shooting, always shooting. The firefight is intense. I change the magazine and I keep shooting. Thereupon I see that they wound Mario Casañas. I see him faint and I pull him towards me. It’s Mario’s blood.” Carlos Gutiérrez did not lose his optimism: “Guys, we are already on the third floor, let’s go,” he shouted. Machadito pointed out to him the need to bring in the comrades who were fighting from the ground floor as reinforcements. Carlos agreed and went to look for them, accompanied by Castellanos. They headed down the hall toward the stairs, unaware that they were exposing themselves to the fire on the third floor. They both fell dead.” 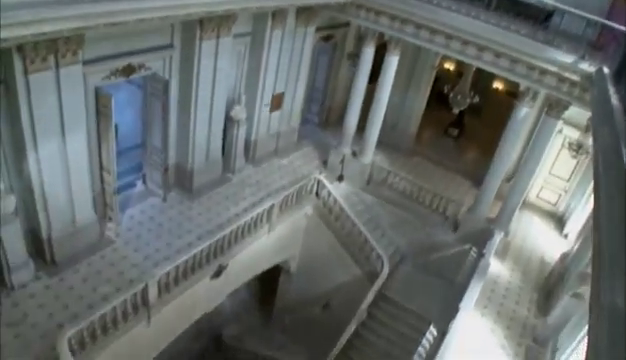 Unfortunately, when examining the historical record of this event, most, if not all of the credit goes to José Antonio Echeverría leader of the student movement at the University of Havana and the DRE (Directorio Revolucionario  Estudiantil) whose mission was to take over the top radio station in Cuba, Radio Reloj, and coordinate his message with the attack on the Presidential Palace. 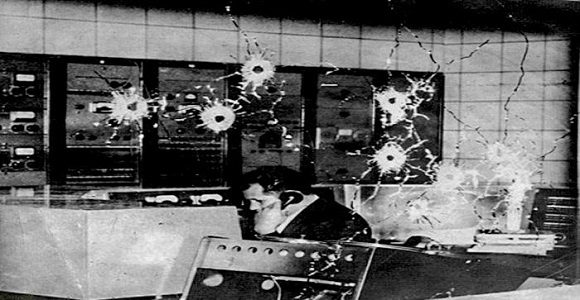 His squad was successful in this part of the mission and the transmission announcing the coup did make it onto the airwaves briefly before being cut off by station management:

“At this very moment, revolutionaries have just executed the dictator Fulgencio Batista, in his own hideout, at the Presidential Palace!  The Cuban people have settled their score!  And we are the Directorio Revolucionario! Cubans who can hear me! We have just eliminated the dictator!”

The truth of the matter is, however,  that even though José Antonio Echeverría did risk everything and was felled by Batista forces, it was Carlos Gutiérrez Menoyo who was the tip of the spear of the operation, who arrived at the Presidential Palace with guns blazing and was in Batista’s office within minutes.  A stairway leading to the upper floors, unknown to its exact location to the raiders,  is the only thing that saved the dictator from being overthrown by a maverick group of young university students who were fed up with Cuban dictatorships.  A backup support squad that never showed up caused by logistical failure or perhaps even cowardice, sealed Carlos’s fate that day.